If you’ve seen any of my Screenshot Saturday features, you’d know that I’m not exactly shy when it comes to giving The Wild at Heart a showcase whenever possible. Moonlight Kids’ upcoming adventure just appeals to me quite a bit, with its gorgeous hand-drawn art, intriguing settings and fun-looking gameplay. So it goes without saying that I jumped at any chance to check out a hands-on demo of the game. And so it was basically time to ask the question that goes for every game in Screenshot Saturday: will this actually play as good as it looks? Well, after a quick session, I can safely say that The Wild at Heart is shaping up to be something special.

The demo opens with one of our two leads, Wake, starting out in a dark area, approaching the silhouette of his on a sofa surrounded by several empty cans. Admittedly, not too subtle in suggesting the story will have darker themes and that our main characters (the second being Kirby, not present in the demo) may see this new fantasy land as a source of escapism at first, but still intriguing. We then have Wake…well, wake up from this dream in the Deep Woods, where a kettle-headed character named Scrap Heap has souped up Wake’s latest invention, a modified vacuum called the Gustbuster that serves as one of the main gameplay elements. 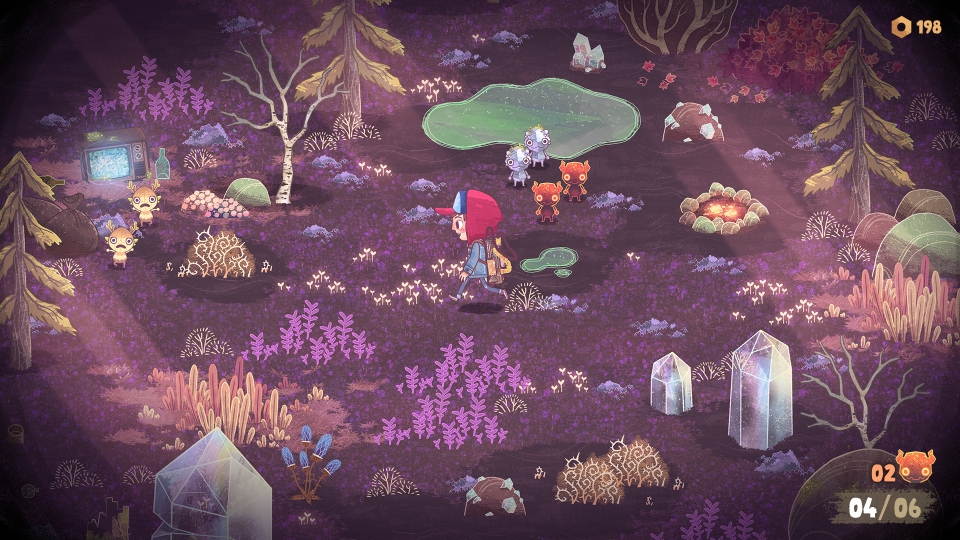 The Gustbuster, as expected, is simple and fun to control, and used for various puzzles. This being the intro, of course, things start out simple. We use the suction created to bring a tree down, creating a bridge. We suck in some bees, temporarily freeing a path for Wake to walk through. This gets us to the campsite we currently have with Scrap Heap, which serves as our current base of operations, where Wake can also craft new items and devices. Then we see a small Spriteling trapped on an island and use the power of the the vacuum to bring them back to shore.

And this is naturally where I should introduce you to the Spritelings, and where the Pikmin influence becomes notably more obvious. The Spritelings are small creatures that immediately join up with you when you come into contact with them, following you around. The little guys can do a numerous amount of things for Wake, such as collecting and carrying various objects, breaking down obstacles, constructing bridges and fighting monsters, to name a few objectives. They’re cute, quick, and controlling them and throwing them around is easy to pull off. They aren’t exactly invulnerable, though, so they can still be knocked out by the likes of enemies such as the giant toad-like Bellowogs, even if for a brief period.

The Wild at Heart also has a few different varieties of Spritelings. The demo featured Peblings as well, which are similar to Spritelings but are made out of rock. This means that they’re tough enough to smash certain obstacles like large crystals, and are immune to the likes of bee stings and other obstacles. Later parts of the game will also introduce Budlings, more nature-themed critters that are immune to any natural toxins that may otherwise slow you and other Spritelings down. And screenshots have hinted at more later on, suggesting a good amount of variety when it comes to Spriteling abilities to experiment with and puzzles to solve. 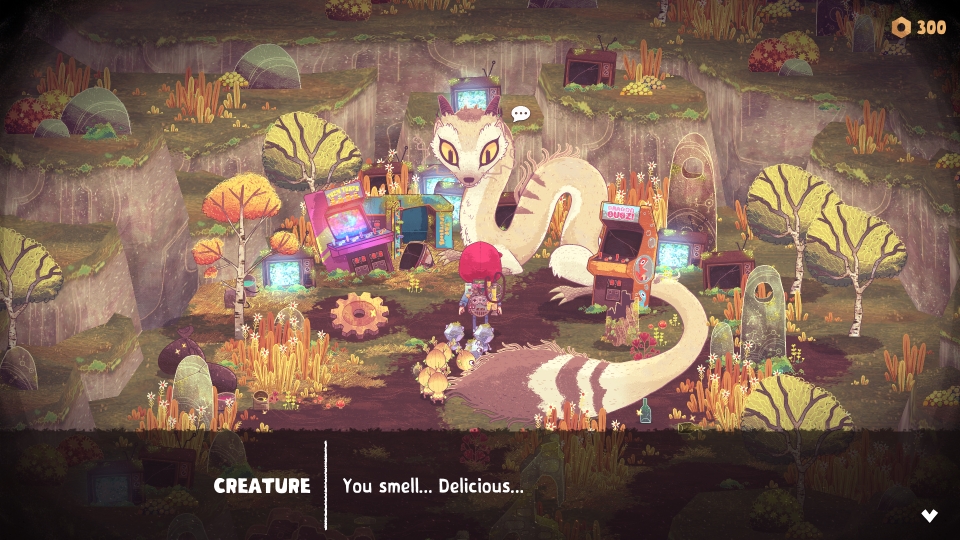 And speaking of puzzles, The Wild at Heart nicely alternates between figuring out how and which Spritelings to use to get pass various obstacles and using the resources gathered by them and you to craft necessary items. In the demo, a large and menacing ferret-like monster named Cath was guarding a huge gear needed to open a door and advance. Cath decided to strike a deal with Wake, though, trading it for any delicious taste they haven’t experienced in a long time. So first you have to get your bearings and find ways to get around various obstacles and access new areas, then gather new material from them. Once the Spritelings help you bring it all to the campsite, you have to construct other items such as explosives or pieces of machinery (windmills, in this case) or health potions to assist.

It’s easy stuff (although again, this was just the game’s opening section), but it was still extremely effective, possibly due to having proper pacing between the various actions you and the Spritelings have to perform. The Wild at Heart feels like a game that knows how to really keep the player active without forcing things, be it carrying out various tasks to further the story or just wandering around, exploring the game’s world. Speaking of which, the setting of the Deep Woods is lavish and detailed, with a lot of unique flora and fauna existing alongside discarded electronics, garbage bags willed with salvage to collect, and other scrap, as if to truly highlight that this is some dimension where lost and discarded things go. 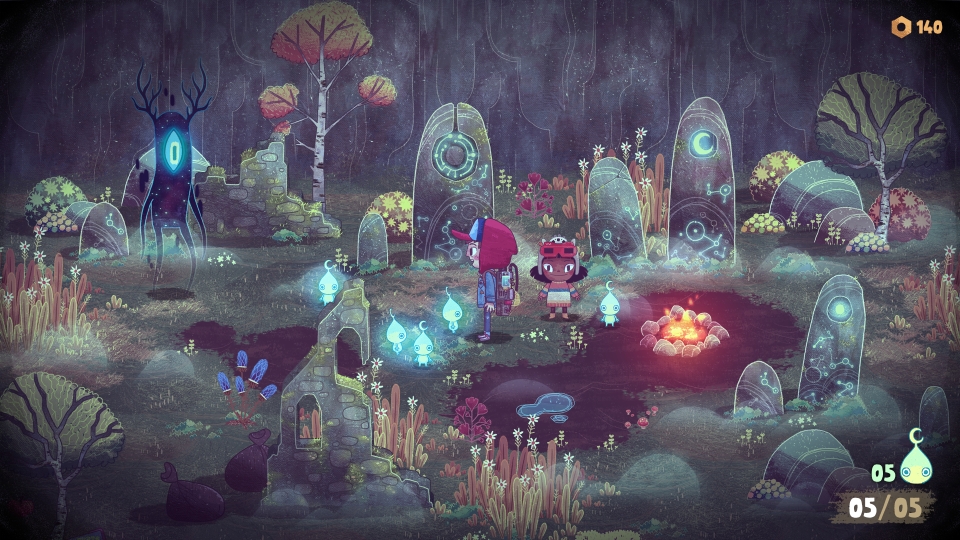 Of course, this world is also done justice thanks to jaw-dropping artwork, with the hand-drawn and cartoonish style being extremely bold and attractive, enhancing the fantasy mood even further. The graphics, stunning as they are, do lead to one notable flaw, though. While the backdrop is full of an incredible amount of detail, as mentioned before, this does end up concealing the occasional items like a set of vines used as a ladder for climbing. Thankfully, there was only one instance of this in the demo, but it is a possible obstacle Moonlight Kids should look out for.

After being able to rig up the gear needed to get to a giant fruit, we presented it to Cath, who gives Wake and the Spritelings the gear needed for the door. We headed through, but just after we did, darkness fell, the Spritelings ran away, and shadow creatures named Nevergazers began to advance on us just as the demo ended. Creepy foes, yes, but another part of this magical and colorful world that I can’t wait to see more of. Pretty much everything about The Wild at Heart is equally as inviting, from its animation and style that draws inspiration from the likes of The Secret of Kells to the beautifully simplistic and fun gameplay in every area, be it the Spritelings, Gustbuster or crafting. No release window has been announced for the game yet, which is currently set for the PC and Xbox One, but it should be a journey worth waiting for.