Every time Final Fantasy XIV has a release, there’s some grandiose collector’s edition. The original 1.0 release started off with a sizable box that included the one-time key generator and leather back journal. A Realm Reborn featured another beautiful box and alongside an artbook, a special movie and numerous in-game items. Heavensward stepped things up with all of that but now an expertly-crafted dragon mount figure. Finally, Stormblood had all that plus a cloth world map and a figure of the game’s most villainous antagonist, Zenos.

With the release of Shadowbringers, Square Enix is continuing their trend in bringing us impressive collector’s editions.

Just as you can expect, the collector’s edition comes in a 10″ x 9″ x 12″ box. Unfortunately, from the outset, this is the least appealing part of this collector’s edition. In the past, the outer sleeve has included a beautiful piece of artwork to grab the consumer’s attention. With Shadowbringers, it’s purely a black box sleeve with the logo on front and on the back, a picture of what you can expect from the goodies. 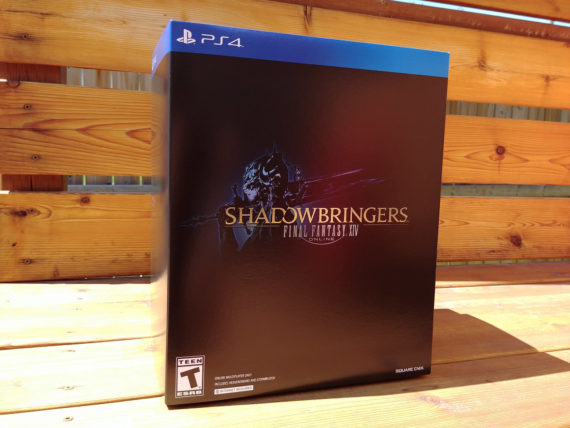 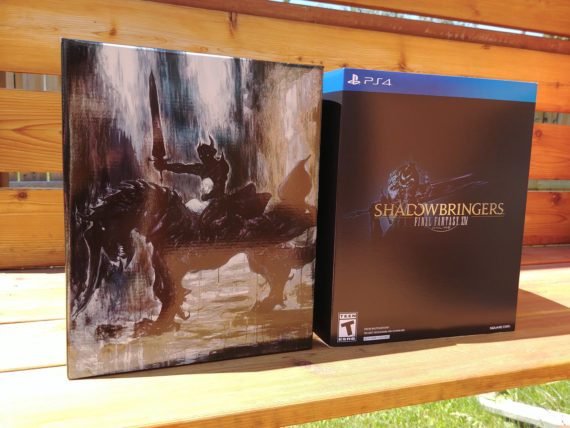 Fortunately, The innards are much better. Opening it reveals the gorgeous artwork from Yoshitaka Amano, who has been with the franchise from the very beginning. Again, though, I do wish there was more to it. Outside of the art on one side, the other three sides merely have a faded head representing the the Dark Knight and “Final Fantasy XIV Online” printed in the middle. I suppose all of this does align with the whole Warrior of Darkness aspect of the game, but it’s minimalist.

Cracking it open, though, we see a couple of things immediately. Firstly, there’s another box within the box with the Meister Quality Warrior of Darkness figure. We’ll come back to that in a second. There’s also two cardboard pieces on the bottom on the side, with the former acting as a little more breathing room for the figure, and the latter being the game and the extras. 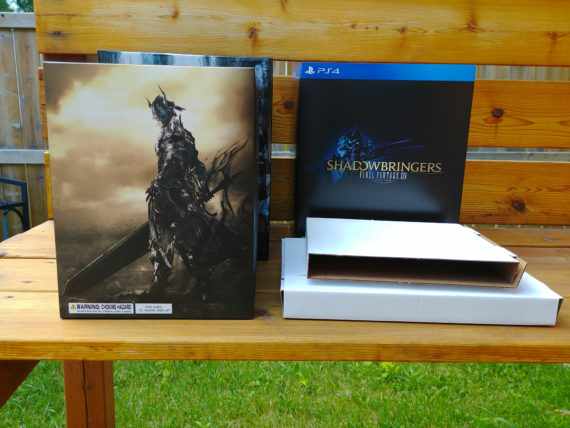 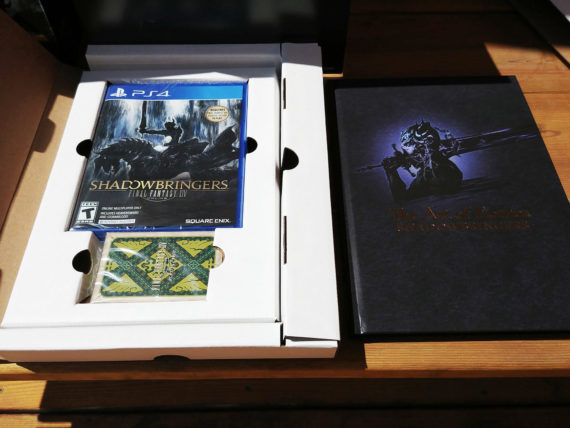 Cracking open the cardboard piece immediately reveals the lovely dark-covered artbook, and just below it the game, playing cards and a sticker with the game’s logo on it. This is a full 52 card deck of cards that’s specifically designed with Final Fantasy XIV’s artwork. The Art of Eorzea – Shadowbringers – book contains eighty colored pages with a plethora of pieces of art, most of which are character and clothing designs. As fantastic as this compilation of art is, most of it is what we’ve already seen. Mind you, there is still stuff you might not have seen, but if you’re already well into the thick of the game’s coverage, you’ve probably seen most of the artbook already.

Cracking open the game itself, we see a dual-sided slip cover, which is a wonderful addition that features both the Yoshitaka Amano piece and the Dark Knight CG artwork. There’s not much outside of that. There’s some advertisements for other Square Enix games, an epilepsy warning and the collector’s edition code itself, which includes the Fran minion, Revolver Gunbreaker weapon, and the Grani mount. 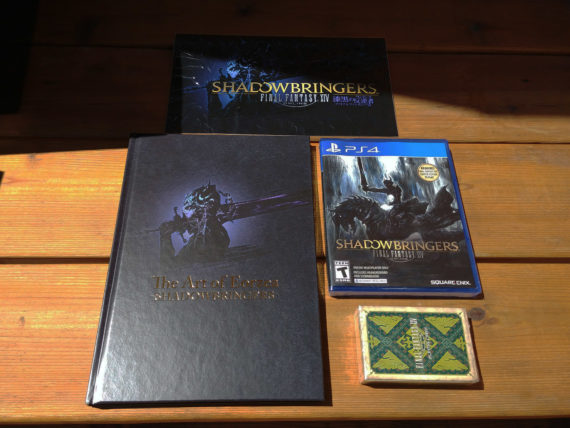 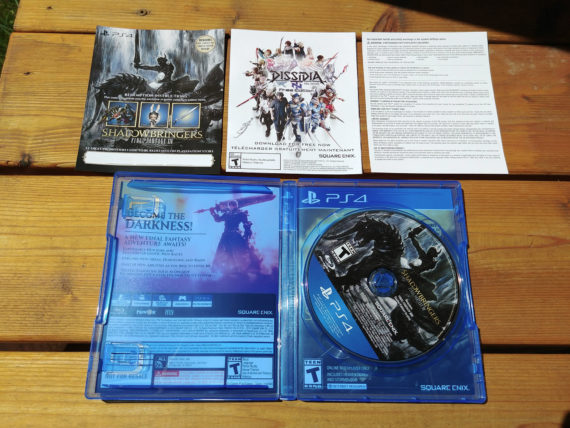 Now onto what everyone has come here for: the figure. If there’s one reason I rarely go for a game’s collector’s edition, it’s because the publisher tends to cut corners on the main feature because it’s hard to sell something of quality at a discount. We’ve seen it with numerous companies in the past, but one that has held its high quality standards is Square Enix and they don’t disappoint here. The Dark Knight figure is a 9″ x 5.5″ x 3.5″ model and the quality is exquisite. The level of detail is the quality you’d hope for, and while it’s not the heaviest of figures, it’s not light either. 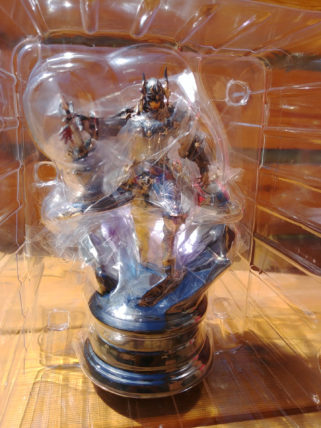 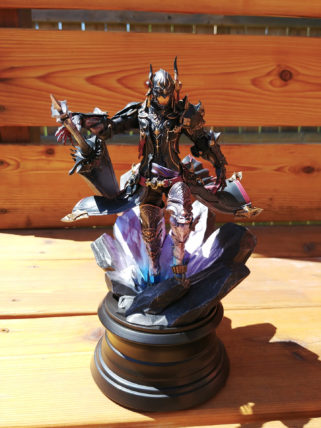 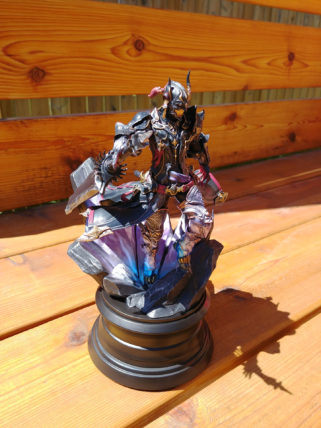 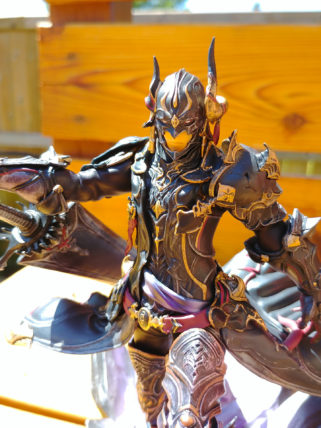 And there you have it. Everything that’s included in the sizable and pricey ($199.99) Final Fantasy XIV: Shadowbringers Collector’s Edition. The figure itself will be what players will want and it doesn’t disappoint. Sure, it comes at a premium, but what you get is well worth it if you’re a collector.

Final Fantasy XIV: Shadowbringers is available right now for PlayStation 4 and PC. Be sure to read our review before jumping in. 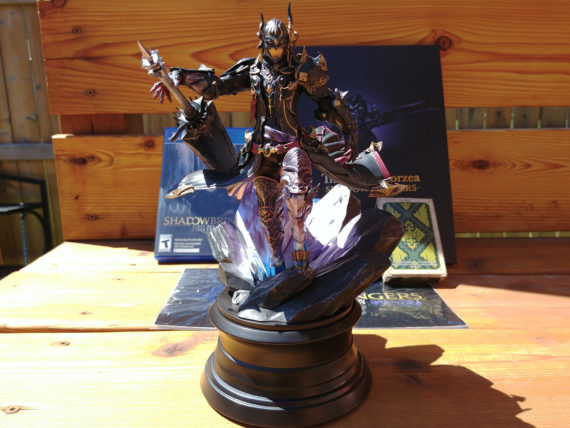 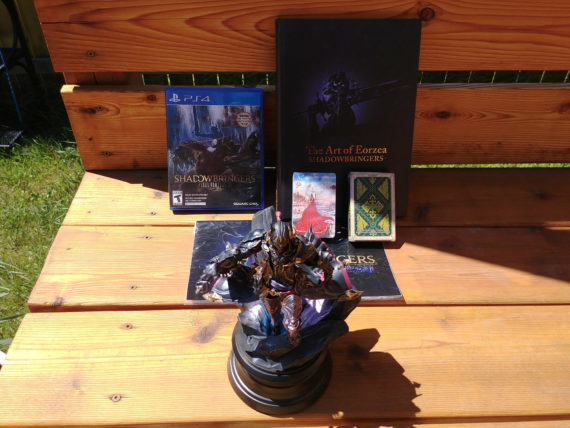