Whenever I need a trip down memory lane, I find myself digging into some scans I have of old video game magazines from years past. And recently, I decided to check in on a few issues of Game Players from 1995 and 1996, largely to check out the “Game Ideas” portion of the letters section. For those unaware, Game Players, being more humorous in tone than its peers, encouraged readers to come up with the most insane game ideas possible in the hopes of winning a mystery prize. It’s just hilarious to look at some of these ideas given today’s indie game scene, where more experimental stuff is encouraged. What was bonkers back then would be potential genius (albeit still bonkers) today. And in the December 1995 issue, I just happened to find this… 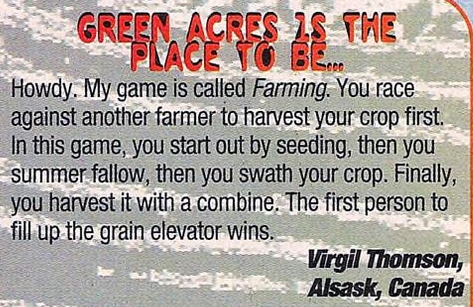 …sadly, Virgil lost to a game called The Adventures of Sprout and Squishy, which…may defy description. But if we could somehow hand out a posthumous award for retroactively predicting the rise of major video games, Virgil would certainly get it. Not only did the Harvest Moon series kick off next year (reaching North America the year after that), but then we would receive an entire Farming Simulator franchise about a decade later and today Stardew Valley is one of this decade’s biggest gaming successes.

Where exactly am I going with this, you may ask? Well, the thing is that not only do we now have another indie farming simulator on the way, but one infused with a level of craziness that would fit right in with the other ideas sent in to Game Players. And that leads us to Atomicrops, a roguelike post-apocalyptic farming simulator from Raw Fury and developers Bird Bath Games. 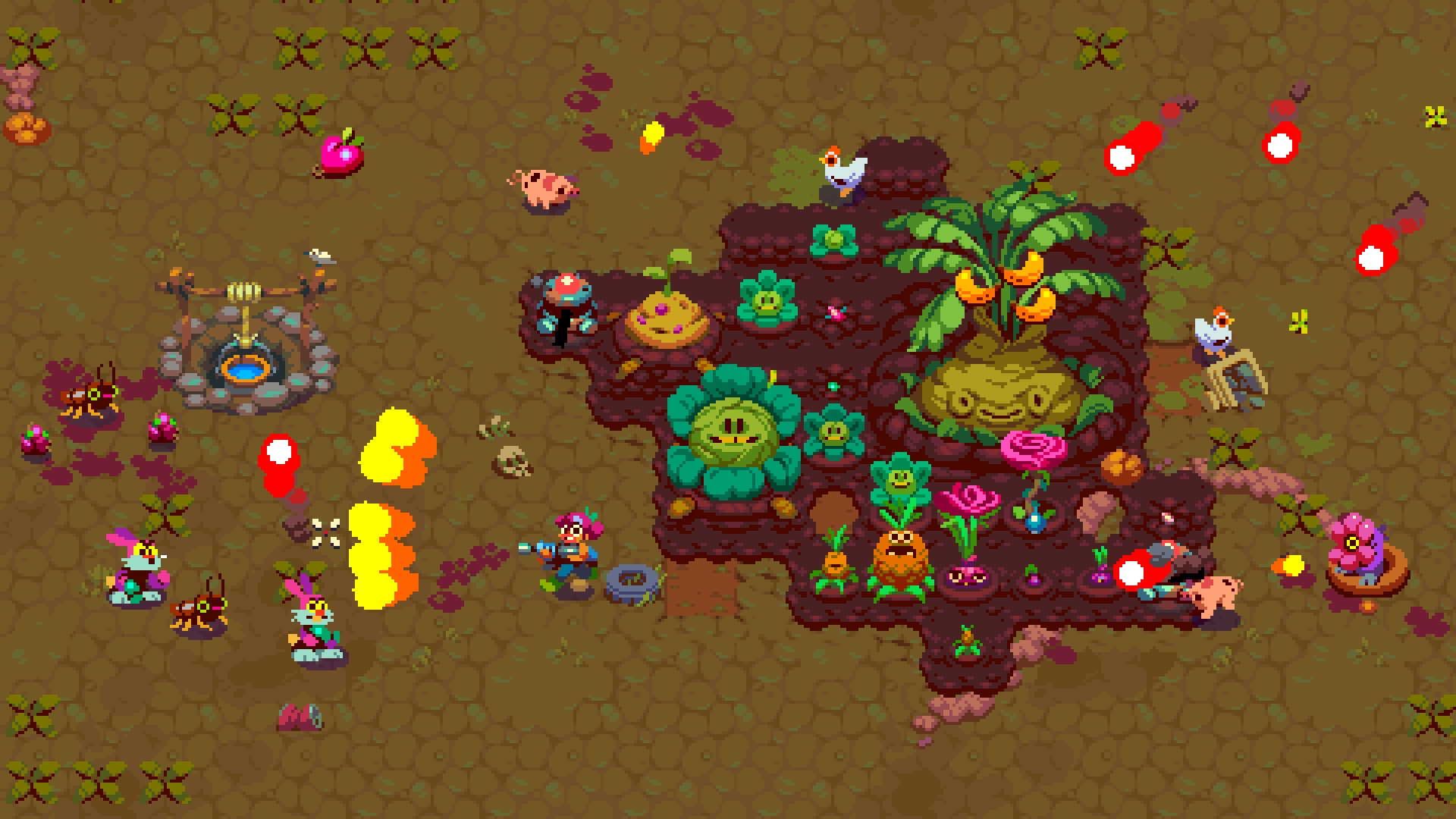 As mentioned, Atomicrops takes place after an apocalypse strikes the Earth, this time if the form of a nuclear blast. And after emerging from your shelter, it looks like you have the last farm on Earth. So know you have to grow ultra-GMO crops in order to feed the local town, being the only source of edible food now. Doing so is simple. You start with a patch of soil that you can add on to, plant seeds, water and fertilize them at appropriate times once the prompts above them appear, and then when the seemingly-sentient veggies with cute faces pop up, harvest them. Simple, enjoyable stuff. But as also mentioned, Atomicrops is also a roguelike, and a twin-stick shooter at that. So that means having to grab a gun and defend your greens from mutated wildlife once night falls.

Defending the crops, however, is harder than it may appear. It seems like standard twin-stick shooter action at first, but even with the weaker enemies here, it only takes a few before things can get overwhelming. Why was this more difficult then it appeared to be? Well, it may be that it isn’t merely about defending your crops, but still making sure to still nurture and harvest them as well, all while under fire. That’s the approach I took, anyway, as I needed to have as many mutant veggies as possible in order to feed the nearby town and keep the cash coming in. Not that I’m complaining about the difficulty, though. Far from it! It was still the right level of challenge, it just meant that I’d have to learn as I go along and figure out the best strategies, of course. 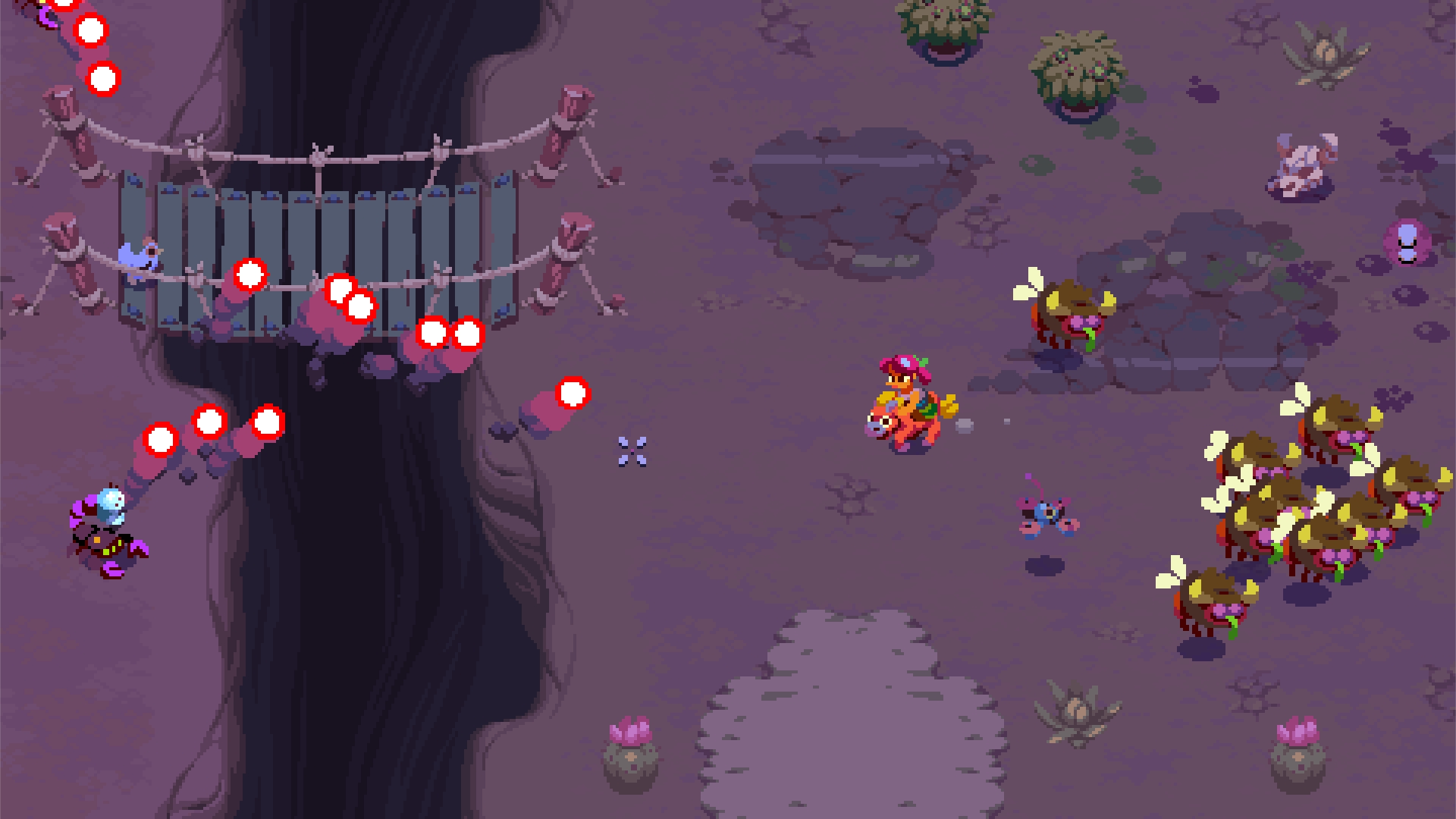 Of course, scavenging for the best loot is a necessary strategy in Atomicrops, unsurprisingly. Your farm is surrounded on all sides by various wilderness areas. Each one has their own theme, such as a grassy plains or a desert environment (presumably the nukes have screwed up the environment in such a way that allows them to be this close). During the day, before or after plating your crops, you’re free to head into them and try to gather whatever you can. “Try” being a key word, of course, since the various creatures won’t give up anything without a fight. Aside from various roaming dangers like herds of stampeding beasts, you have small camps inhabited by multiple critters. Naturally, they put up the biggest fight, but give up the biggest rewards.

So after a successfully good raid on a few camps, I came back with new seeds and passive abilities, as well as the ability to summon a giant tractor that could roll over enemies and harvest the crops, among other things. Summoning the tractor is a bit tricky, as well as properly aiming it, but it was still fun to use. It was at this point that I was starting to get the feel of things. So when the night ended, it was time for a chopper to pick me up and take us to town, where I could cash in my home-grown goods for cold hard cash and purchase new weapons and supplies. Would the manic harvest be worth it? 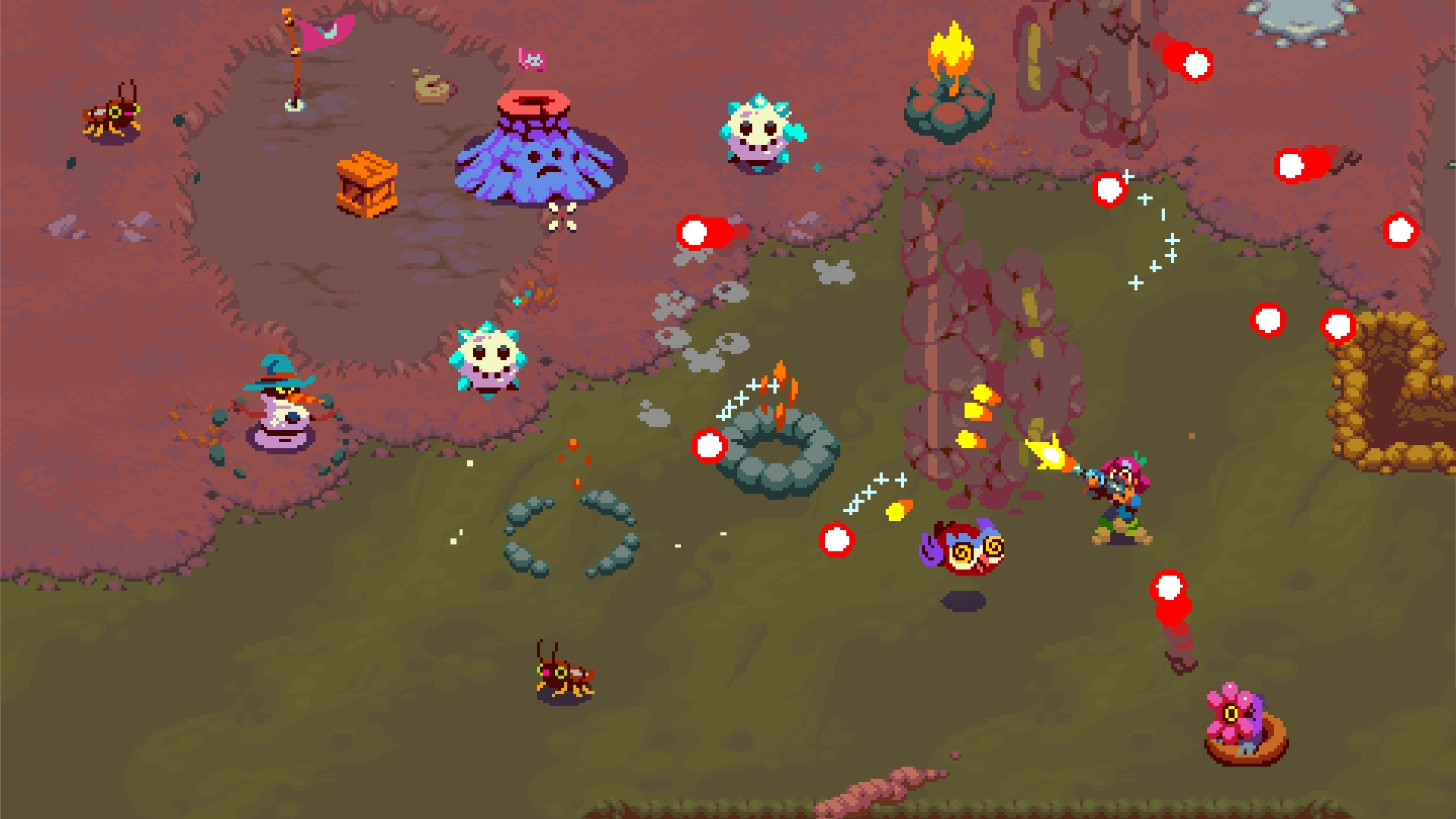 Well, you really need a few good harvests to advance in Atomicrops. Provided you want top-notch gear, of course. After a couple of in-game nights, though, I had enough cash to buy an elephant gun that was on sale, which provided a hefty kick needed to fend off any intruders who wanted any googly-eyed carrots. Unfortunately, as it was still early (and this was just a demo), I didn’t have the ability to explore larger sections of the town or try my luck at any romance options. It didn’t exactly help that after a while, I had failed to gather enough vegetables to help contribute to the annual harvest for them, which sort of led to a few people possibly dying from malnourishment. Whoopsie. Luckily, the demo had a way to see the success route, if only to glimpse the sunny, successful festival and the rewards gained from it.

While we have yet to see any of the deeper narrative and management aspects that should have more potential as you progress, Atomicrops is still a blast as a twin-stick roguelike game on its own and the farming mechanics are the cherry on top. Combat is nice, fun and challenging while encouraging exploration and strategy, the farming elements are simple to understand and fun to work with, and Toby Dixon’s vibrant and cartoonish art style perfectly fits this gleefully insane world. It’s a twisted take on the likes of Stardew Valley that we can’t wait see more of when it hits the Epic Games Store later this year, with console versions to follow in 2020.