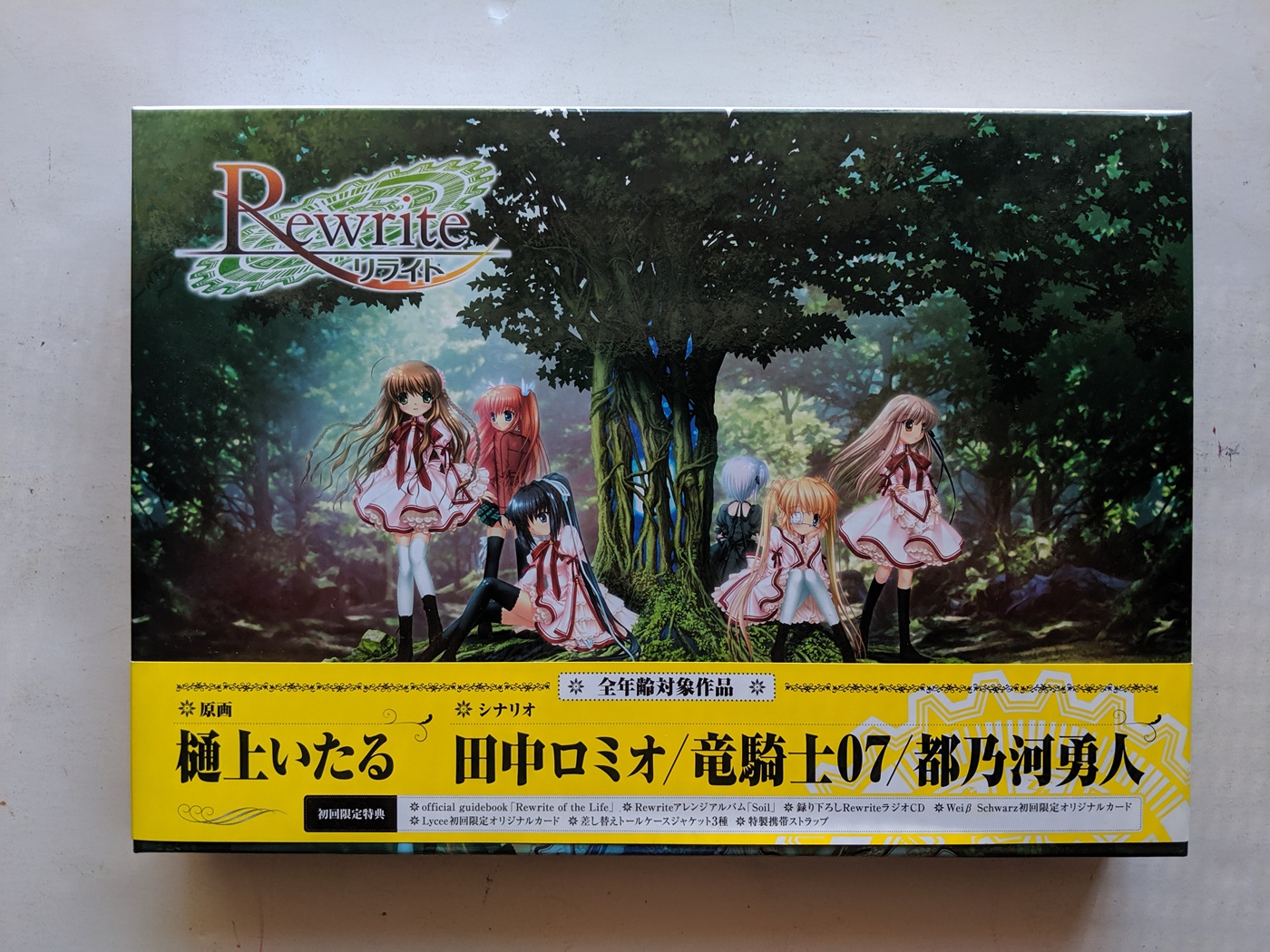 Anyone with an interest in visual novels have likely heard of Key. This developer is the name behind many beloved titles in the genre, such as Clannad, Little Busters! and Kanon. As time goes on, we continue to see more and more of their work finally receiving official English-language releases. Some still remain exclusive to Japan, provided you disregard fan patches. One such title is Rewrite which originally launched in 2011 for PC. Since then it was ported to PSP, Vita, PS3 and PS4. Rewrite+ was announced as getting a translation from Sekai Project in 2017 — but we’re still waiting on that release.

As with many visual novels, Rewrite launched with a special edition. This is known officially as Rewrite – First Press Limited Edition. This version comes packed in a sturdy cardboard box with attached lid. Flipping the lid open reveals a bunch of items separated into two sections. There’s a surprising amount of stuff housed within the box, which is just a bit taller than the big boxes for older PC games. There’s a copy of the game, of course, alongside two CDs, collectible cards, alternate cover art for the game, a phone strap and a booklet. 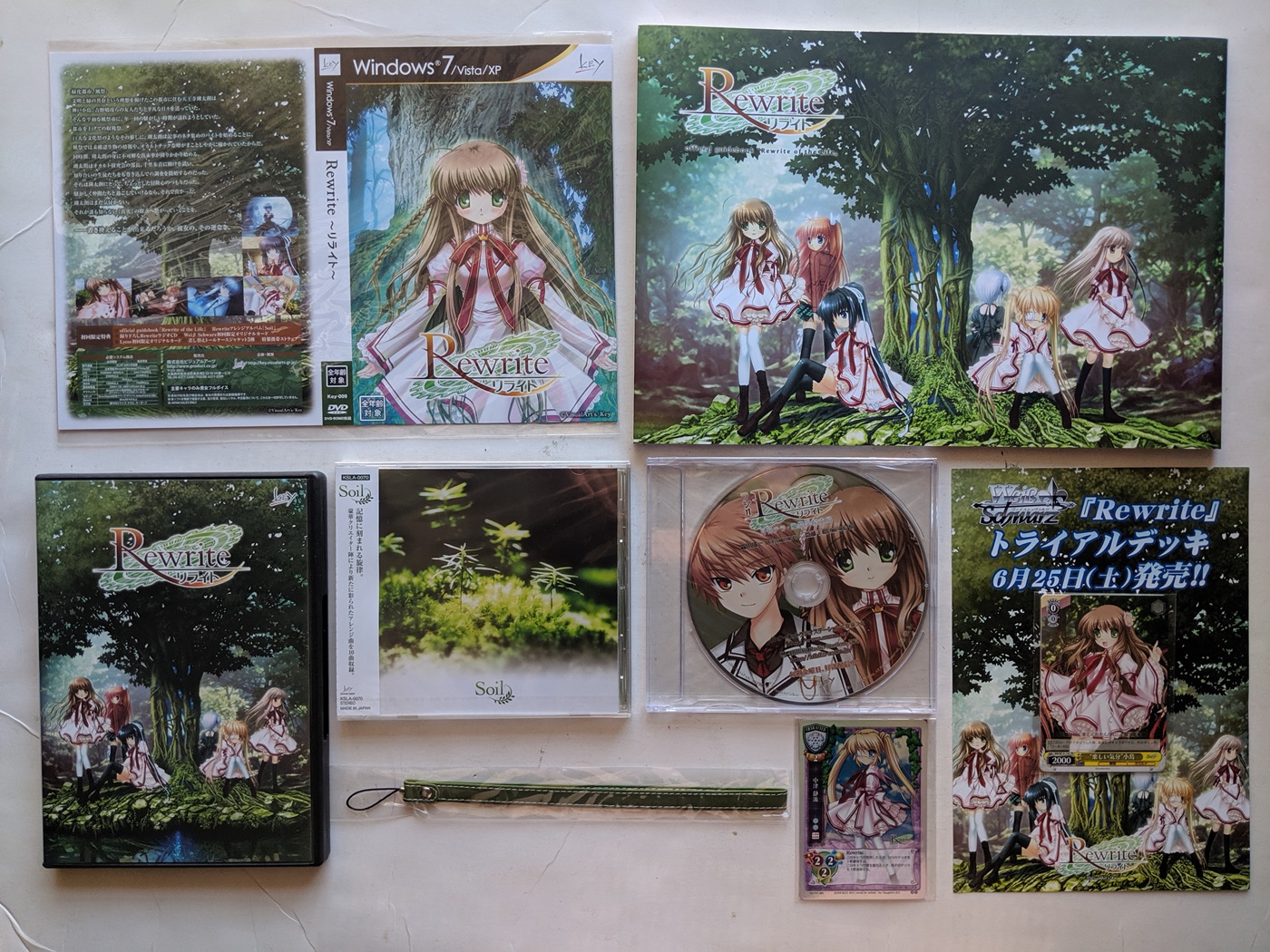 There are two game discs housed within the DVD-sized game box. If for some reason you don’t appreciate the game’s default cover there’s another one included. This one attempts to make it look more like a PS2 game with black border on the top. Instead of saying “PlayStation 2” it says “Windows 7/Vista/XP”. It’s a bit silly, but it might look better on the shelf with console games that way. The included phone strap is a simple green color with white stitching. It would be a great low-key way to show your Rewrite fandom. The only problem is phones these days don’t tend to include a place to attach a strap.

An included soundtrack — titled Soil — comes in a typical CD jewel case and features ten different tracks. Unlike what we tend to see with Western physical soundtrack pack ins, this looks like a legitimate CD you’d buy at a store. Not only is it sealed in plastic, but there are also those stickers that keep a jewel case sealed. There’s also an obi strip included as per all Japanese CD releases. Another disc in the package is housed in a simple slim jewel case without a cover or back art. This is a copy of the internet drama series from “HiBiKi Radio Station” which was accessible online. 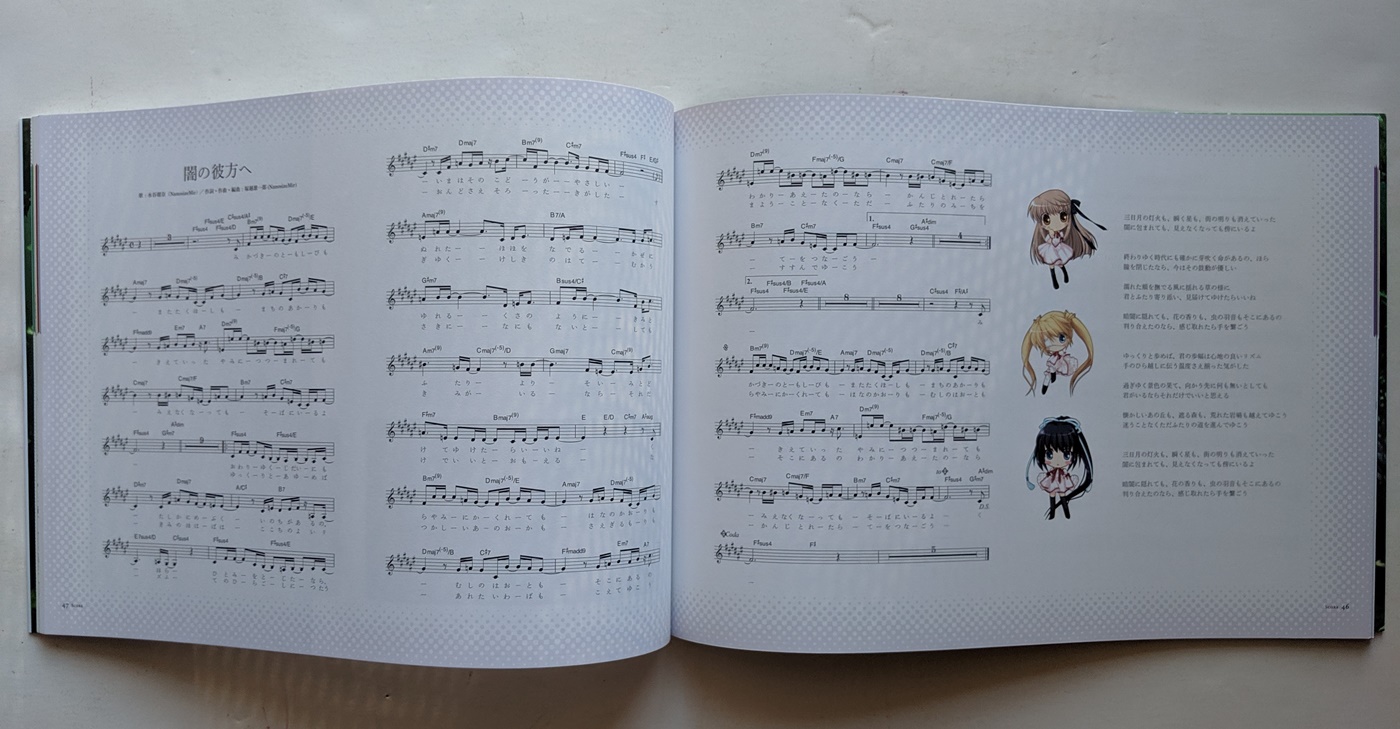 Finally there’s the Rewrite Official Guidebook. It includes just over eighty pages of color artwork, storyboards, comics and more. One of the coolest inclusions is sheet music for two of the game’s tracks. Other inclusions such as a short story are cool as well, though admittedly less so if you can’t read Japanese. Finally there’s a game manual in case players have never experienced a visual novel before. All in all, it’s a pretty great collection of goodies for Rewrite fans. Notably, it can also easily be ordered online for about half of what it originally retailed for.