It’s hard working as a driver in this day and age. Traditional taxis are no longer popular, and services like Lyft and Uber have their own issues when it comes to treating their workers. And then there’s self-driving smart cars, which opens up a whole new can of worms. This is the jumping off point for Neo Cab, a new graphic adventure game from Fellow Traveller and developers Chance Agency. In a future where one huge corporation now controls this type of transport with their exclusive fleet of driverless cars, our main Heroine, Lina, is the last human working as a driver, part of the titular Neo Cab service. And after one fateful night, that won’t even be the weirdest thing about their lives anymore.

The demo we had for Neo Cab featured Lina heading into the sprawling concrete jungle of Los Ojos for the first time, ready to meet up with a friend they haven’t seen in quite a while after a particular incident drove a wedge between them. Before that, though, we had to pick up a photographer in the desert outskirts on the way there, ready to capture the architecture of the city. This allowed us to give the main meat of Neo Cab a spin, that being holding conversations with the various passengers you receive in order to get information, going through various dialogue trees along the way. It’s simple, fun and the characters are likeable and well-written. 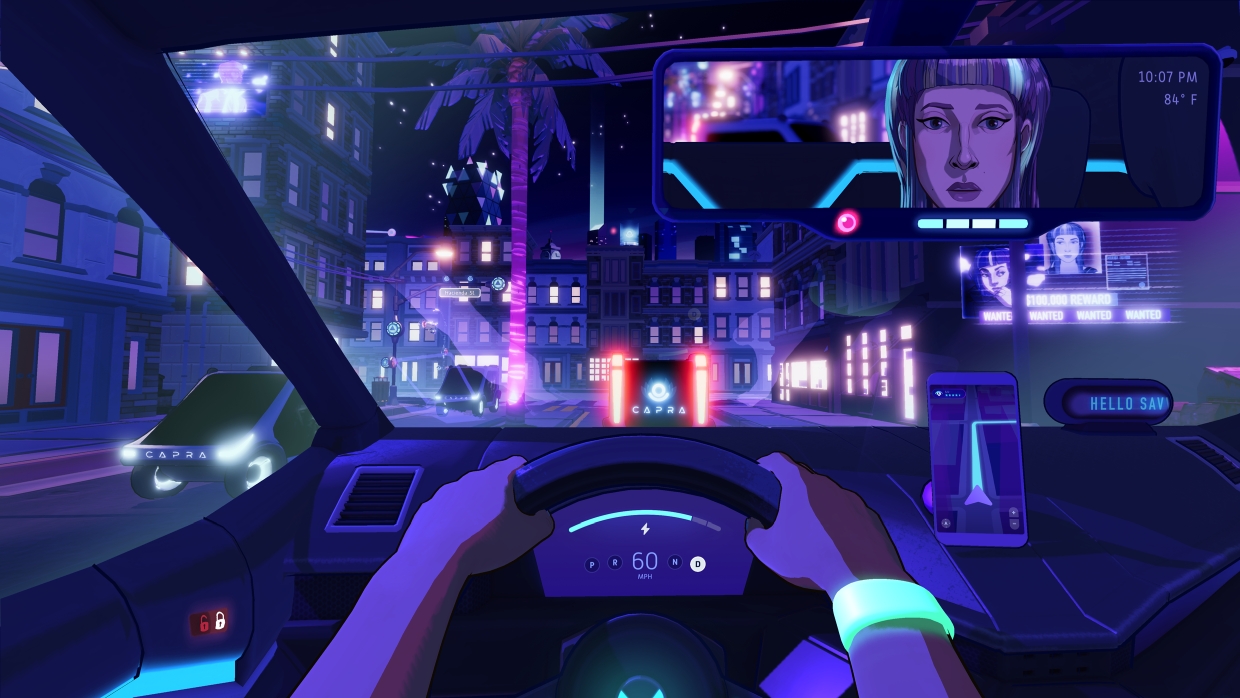 But the most interesting part of Neo Cab surprisingly doesn’t directly relate to the central gimmick of solving mysteries while driving a cab…well, not at first, anyway. After finally meeting up with Lina’s friend, they give us a special bracelet that assists in tracking your current mood. This is represented in the lower left of the screen with a color spectrum, which shifts as you talk with each customer. And depending on where your mood currently lies, your dialogue choices can be affected. If you’re in a cheerful mood, you may be able to provide some uplifting advice. Or in some instances, you may be too angry at a certain subject to even try and feign a positive response. It’s a mechanic that’s simple to learn, but encourages you to try and manage your emotions and responses or experiment with them.

After receiving the bracelet, we drop off our friend, with them having to seemingly run some mysterious errand before they meet up with us later. This gave us some time to just grab a few fares and get the feel of the city’s inhabitants. First there was a teenage socialite of some sorts, eerily forced into some sort of mechanical suit by their parents to supposedly assist them with their health until they can turn eighteen. At a recent police benefit, they showed that they don’t necessarily agree with their mom and straight up called the police officers there fascists, alongside some rather colorful language. This encounter nicely set the tone for the odd and intriguing future that lays ahead. 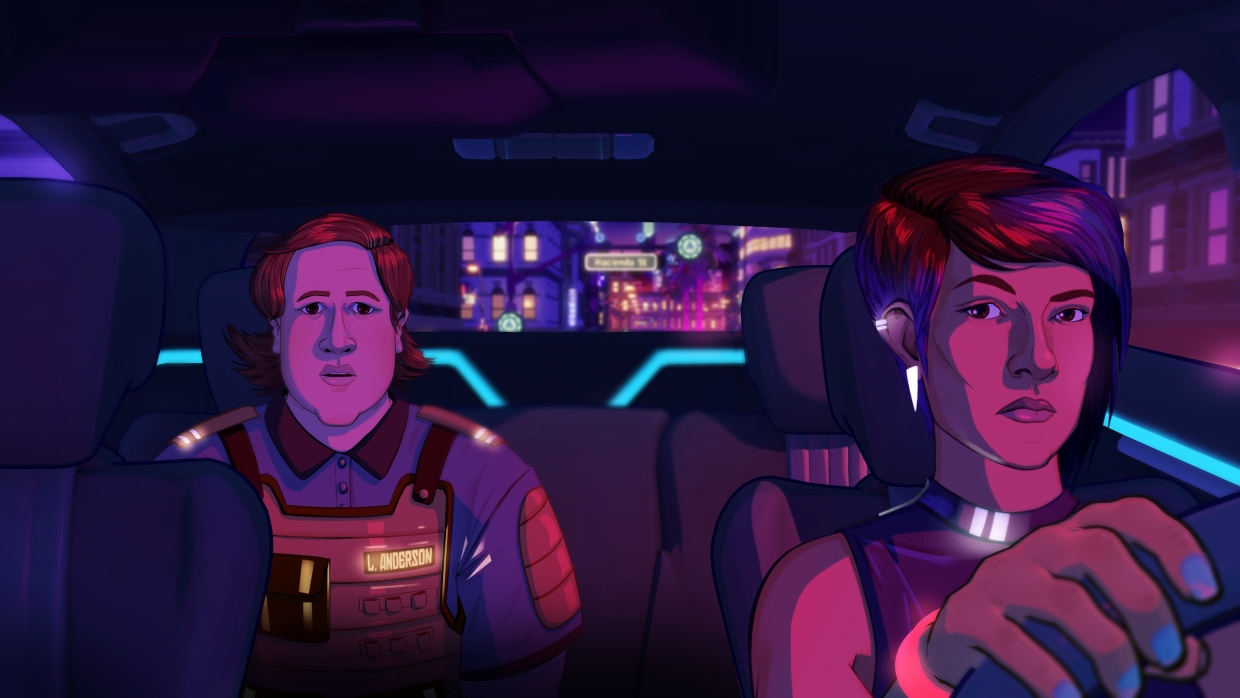 The fare after that, though, was one that was rather unplanned. When driving by what appears to be a small riot, a woman suddenly jumps in the back seat, telling us to just go. It turns out this is a member of a group that protests the recent issues caused by the self-driving cars in the area, so they decide boycott them and just use transport such as bicycles instead. Unfortunately, after being hit by one of these cars, it turns out that this group was more…radical than expected. They began to wail on the car, and our passenger, horrified, had to hitch a ride with us. But now they felt conflicted, since they had to take a cab despite being anti-automobile. We were able to reassure them that they did the right thing and they left peacefully.

Our final passenger was a nihilist, who had only three out of five stars for their rating as a passenger. They were rather skinny, pale and bald, like a stereotypical cultist, almost. In fact, during the ride, they basically discussed the end of the world and the bizarre forces that could destroy it. I chose to have Lina disagree with his beliefs, but be as sympathetic and open as possible. And the bastard gave us a three-star rating, to act as an example of nihilism, which is bad since like actual Lyft and Uber drivers, this affected our overall rating and we need to maintain a certain minimum in order to stay in business. In other words, you have to be careful when choosing passengers and how you treat them, being a bit strategic. 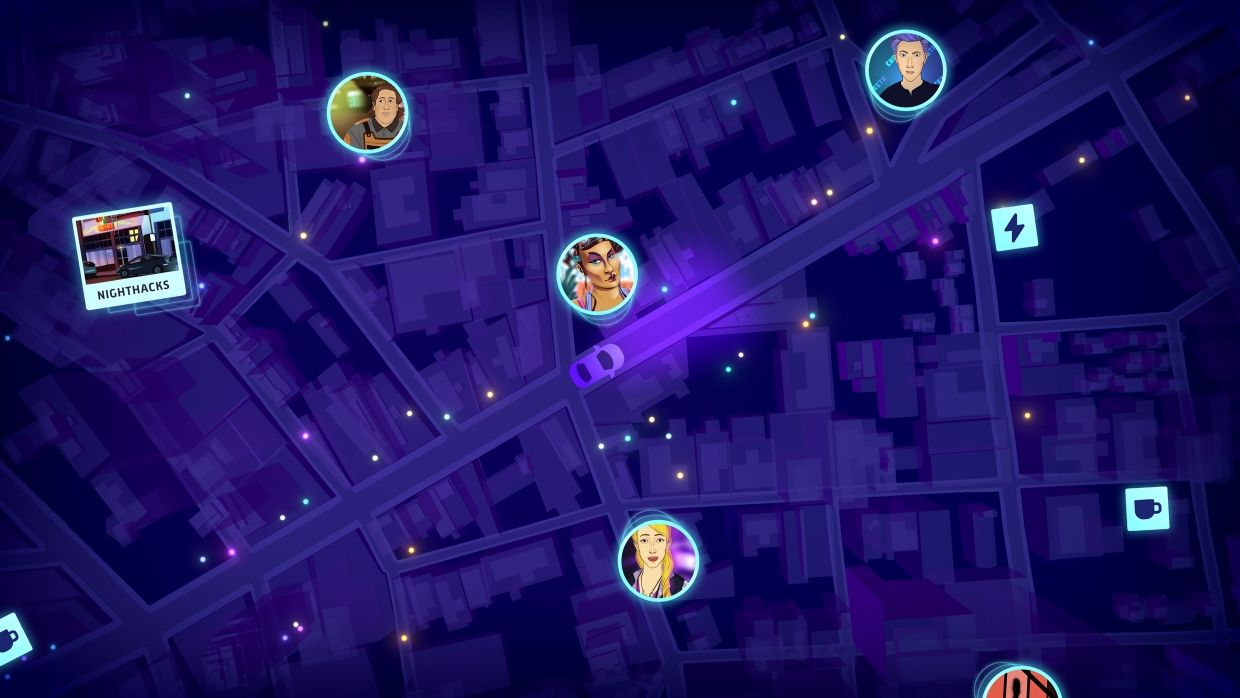 Right after that, though, Lina’s friend tried calling us, clearly panicked and in trouble, but the call got interrupted and ended abruptly. When Lina went to the location the call came from, all they found was a broken phone, thus properly kicking off the story. The demo ended there, so we didn’t get a big chance to see how Lina’s investigation into what happened will truly impact the core gameplay of riding around, talking to passengers and doing our job. Night Call, the other taxi-based adventure game with a similar premise out right now, is having some issues in that the vast majority of passengers you pick up have interesting tales, but only a small portion of them contribute details to the larger case. So it should be interest to see if Neo Cab can avoid this issue.

In the end, it became clear that Neo Cab’s strength easily lies in its varied and colorful cast of characters, sharp dialogue that come out of your discussions with them and an intriguing world that everything takes place in. Managing our emotional health is also a brilliant mechanic to add, and should make the parts where we gather intel more interesting, though we have yet to see how those portions go down. So far, though, Neo Cab is one impressive adventure game and we can’t wait to give it a further drive when it comes out later for the PC.