The problem with aliens is that they’re just so completely alien.  It’s hard to know what’s running through their head-like protuberances, for the ones that actually have something head-like sticking out of what for want of a better word is referred to as a body, but if they’re all about peace and love then it becomes fairly difficult to get a twin-stick action-fest from them.  The aliens of Devader are not, in fact, an E.T.-style wise and harmless species of researcher scientists but rather more the Starship Trooper type, except the Creepy factor gets turned up in direct proportion to size.  The only way to be sure is nukes, except without the safety of dropping them from orbit.

Devader is a twin-stick shooter where a giant robo-mech (the Devader) zips around the outskirts of a matrix-city made from tall green hexagons, protecting it from a massive swarm of enemies that starts off as robo-spiders and only gets weirder from there.  The primary objective, of course, is to blast everything that moves, but you’ll need to keep an eye on the city and protect it as best possible.  Thankfully the player-mech packs serious firepower and the city is tough, but it’s easy to get a little too focused on one side of the screen while the swarm nibbles away at the hexagons from the other side.  This is why there are secondary weapons with incredible power and a decent recharge speed, plus a regular supply of powerups. 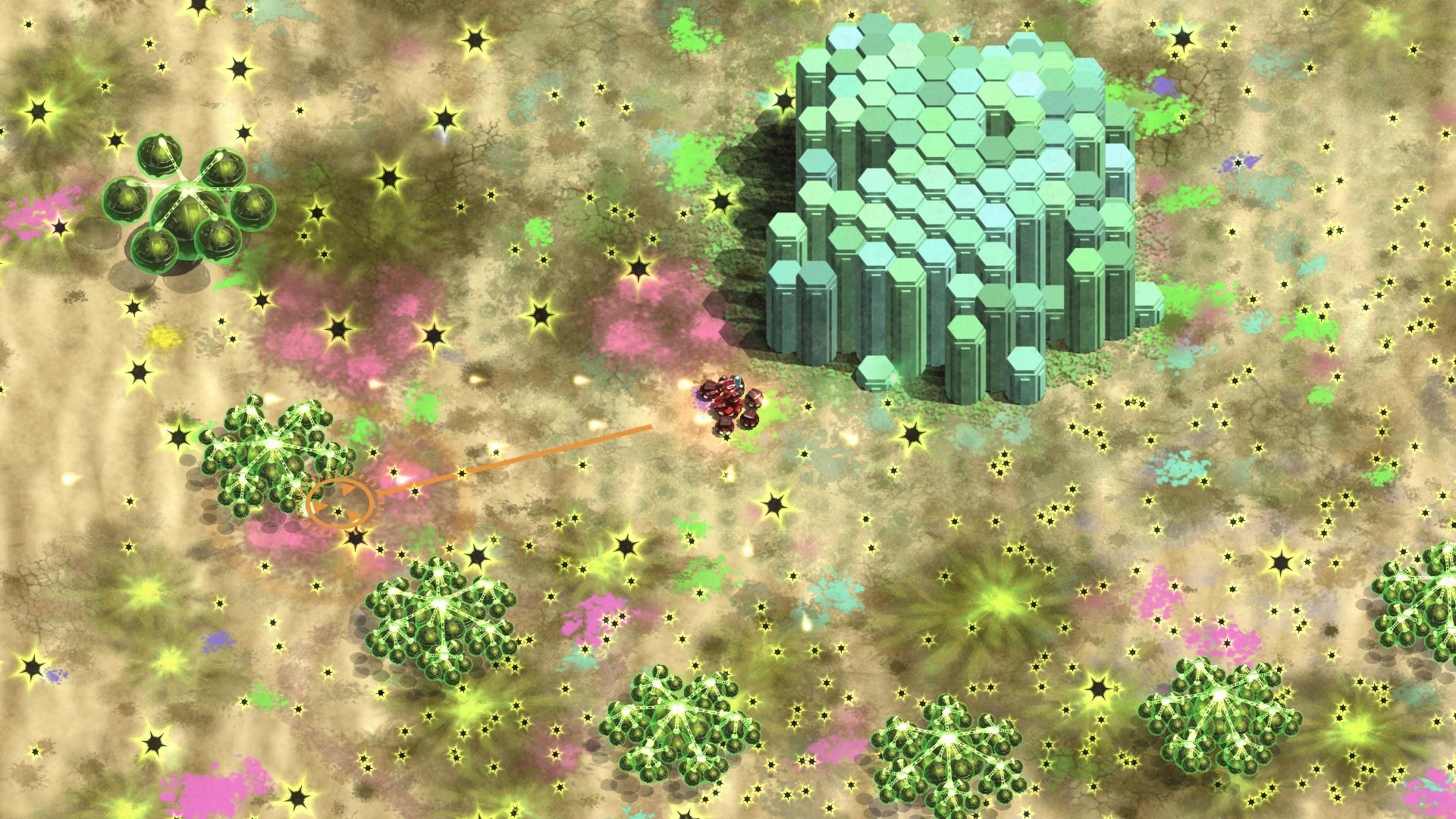 For the first level the mech just has its gun, but there are a good number of powerups kicking around the arena to start off with and more showing up on a slow but regular basis.  The power-spike lasts just long enough to let you settle in and clear the first level, then the game starts in earnest.  The mech gets a super-weapon nuke, usable as often as you like aside from its slow cooldown, but you need to choose between a weapon you can drop from a distance or one which has the mech as its center.  The targeted one takes longer and is a little tricky to aim but makes up for it with power and versatility, while the standard nuke is easier to use and you can rely on pre-existing twin-stick shoooter reflexes to blast through to the heart of the chaos and let loose the blast.  The other special weapon is a turret, although you only get a limited number of them and, if destroyed, it’s gone until a new powerup resupplies you.  The Devader is incredibly powerful but there’s a huge swarm of spiderbots surround the Matrix and it’s only getting worse as new enemies show up.

Each wave is a battlefield, with the Devader running around the hexagons of the Matrix to try and keep damage to a minimum.  The city has a health percentage at the top of the screen slowly getting whittled down as the enemies destroyed on one side of the Matrix provide a distraction for those on the elsewhere to do their work.  Careful turret placement is effective at thinning the herd, while managing the nuke properly means you won’t get too tied up in one area for long, but there’s no escaping that the city is going to take damage from the major battle raging outside its walls.  Choosing a couple of perks between waves helps minimize this, but even a massively powerful robo-defender can only be in one place at a time. 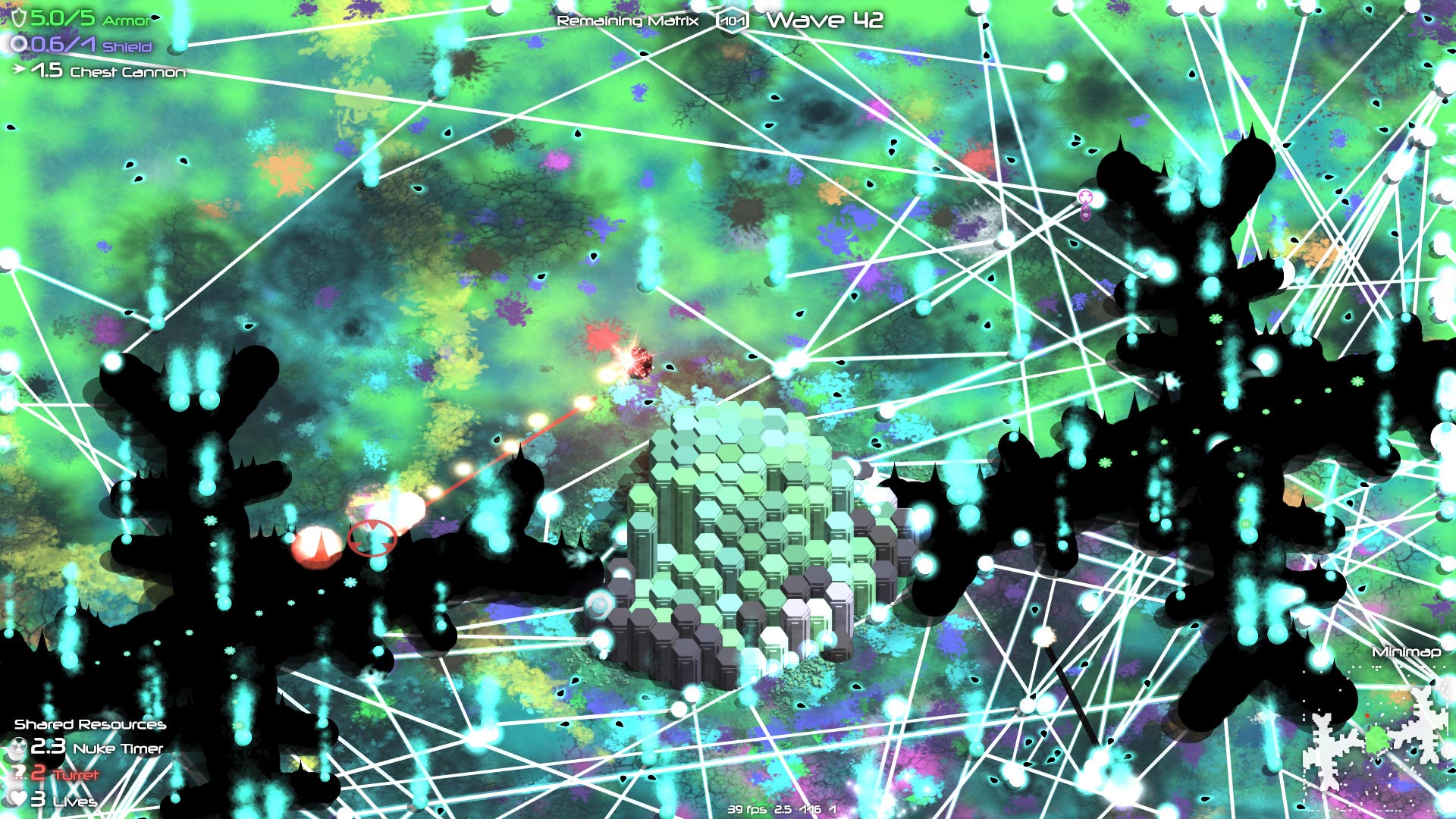 The Devader demo is a good introduction to the chaos to come, with each wave ramping up the intensity.  It’s only the first several levels, cutting out just after a boss fight and before another major confrontation kicks off, but the multiple difficulty levels have different showpiece enemies in them to show off their variety.  Or at least I assume Deity difficulty has more than the one extra in it, seeing as its unique enemy kills me on the opening level.  The point is there’s a lot in there with more to come, so head on over to Steam and give it a play.