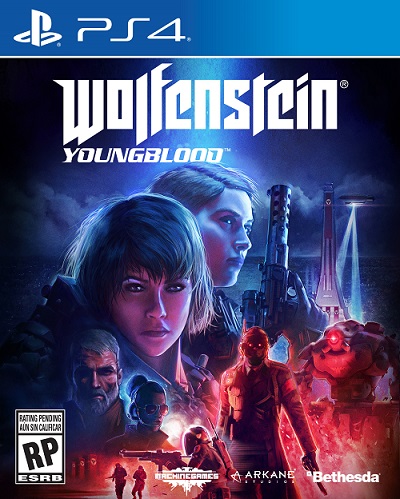 MachineGames’ take on the Wolfenstein IP has yielded two great games and a satisfying spin-off so far. The studio has done a great job over the years mastering their mechanics, designing their levels and telling an emotionally compelling story. It’s all building towards the inevitable Wolfenstein III, which has yet to be announced. Until that time, though, the studio has another project for players to enjoy. Wolfenstein: Youngblood is the second spin-off, but with a twist to the regular formula. Rather than trudge through a Nazi-occupied city as series protagonist B.J. Blazkowicz, players take on the role of his daughters in a co-op adventure through the streets of Paris. With new protagonists, a focus on co-op and profoundly-altered mechanics, is Wolfenstein: Youngblood enough to keep series fans happy or is it just a roadblock in the way of Wolfenstein III?

Wolfenstein: Youngblood takes place about twenty years following the events of The New Colossus. America is liberated, Hitler is dead (killed off-screen by B.J.) and the Nazi regime is in tatters over in Europe. B.J. and his wife, Anya, have raised their two twins, Sophia and Jessica, to be prepared to defend themselves should anything happen. Unfortunately, something does happen when B.J. goes missing. Together with their friend Abby (Grace Walker’s daughter), the two sisters discover that their father has gone to Paris and opt to follow. Meeting with the Resistance, the girls hatch a plan to weaken the local Nazi regime to find clues to B.J.’s whereabouts.

MachineGames’ Wolfenstein games have always focused heavily on telling an in-depth, emotional story with compelling characters. That’s why it’s so sad how little of that is in Youngblood. Despite lengthy cutscenes at the beginning and end of the game, Youngblood has little story to tell and what it has is rather mundane. Complete with laughably bad villains, an obvious plot twist, and an unsatisfying ending, Youngblood’s story doesn’t elicit much emotion from players. 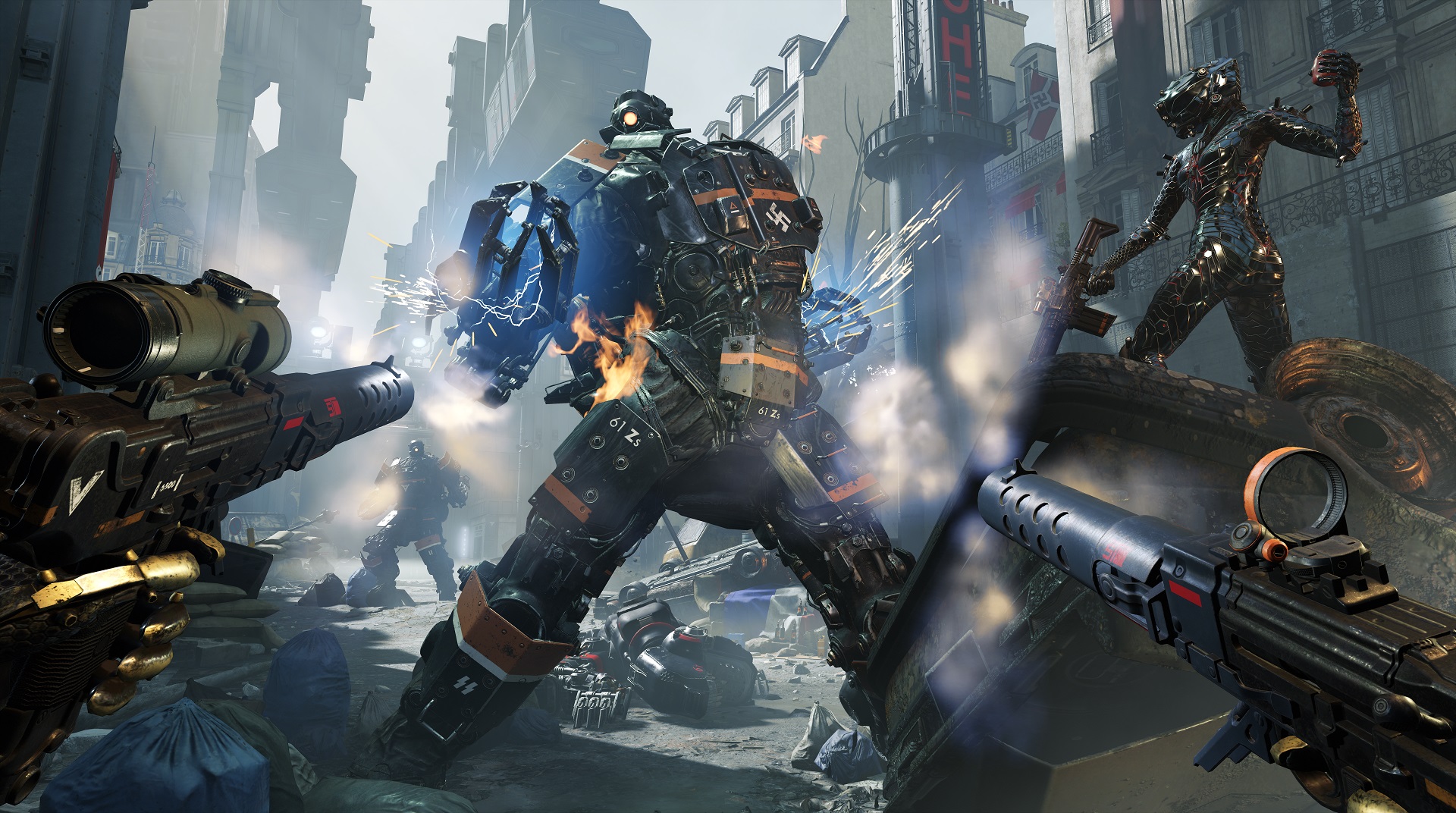 The game also lacks the series’ compelling characters. Soph and Jess carry the brunt of the game with their banter. MachineGames have conceived two highly believable teenagers who are quite dorky and it comes through in their discussions. It’s enjoyable to hear their banter and watch them dance and prank each other during loading screens. Abby, on the other hand, has almost no personality. Despite being the daughter of Grace Walker and Norman’ Super Spesh’ Caldwell, two characters with immense personality, Abby appears to have not inherited any of it. Meanwhile, the game’s villains are your typical, laughing, maniacal Nazis that lack the intimidation factor previous villains in the series had.

It’s disappointing how little attention the story and characters were given in Wolfenstein: Youngblood. Clocking in at 8-10 hours, the story is easily the shortest and least involved on MachineGames’ portfolio so far. It’s possible, however, to more than double that length with the game’s focus on exploration.

In a stark contrast from previous games, Wolfenstein: Youngblood drops the linear mission structure for a more open experience. After completing the tutorial mission, players are set loose to explore the districts of Paris and tackle the main missions. To progress through the story, players have to tackle three towers, called ‘Brothers’ in-game. It’s a highly similar structure to what we saw in Rage 2 earlier this year, a structure that also hurt the pacing of that game’s story. While Youngblood sacrifices its pacing for this structure, it replaces it with more open areas filled with secrets, sidequests and bombastic action. 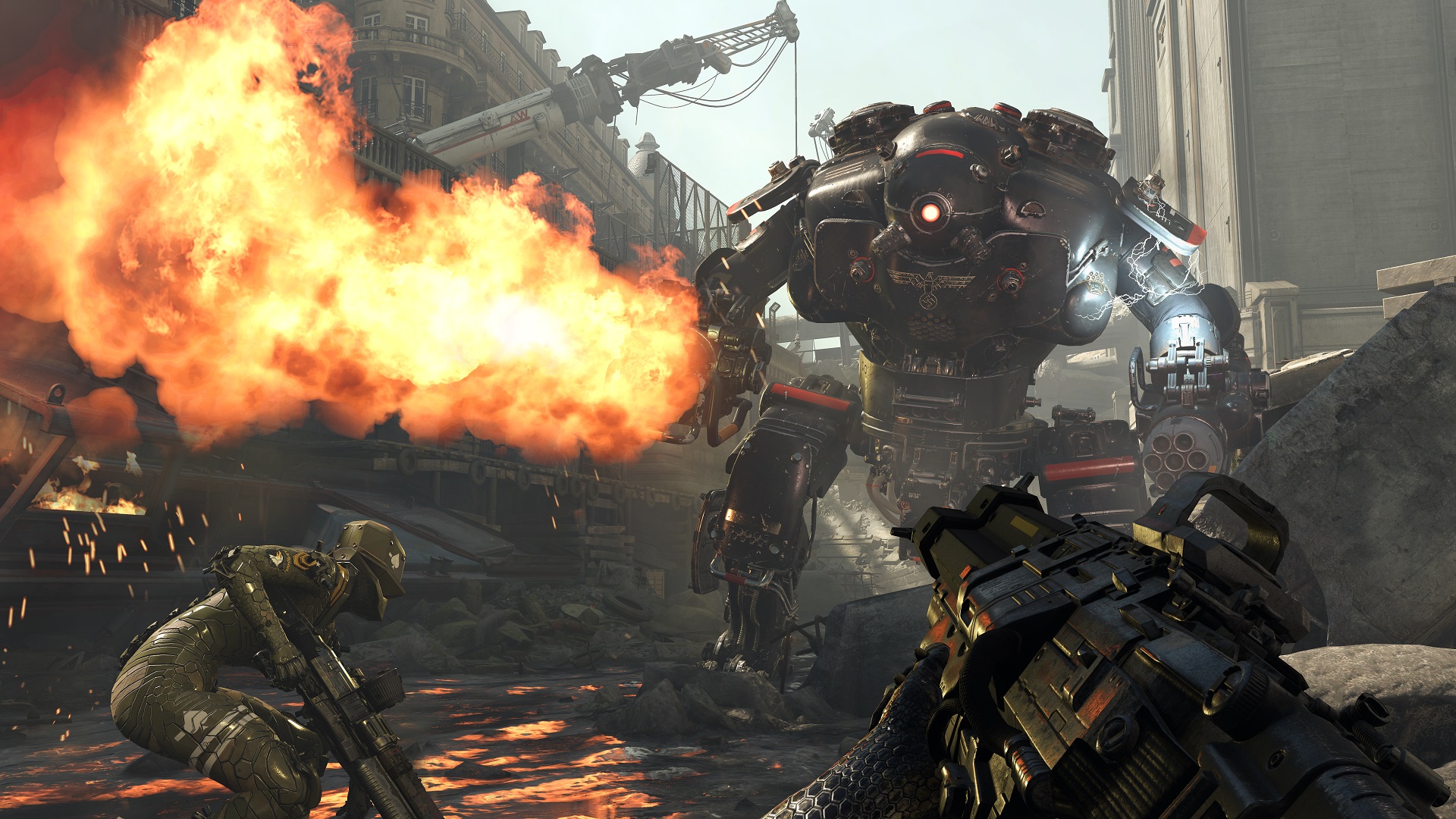 Paris’ world is split into different hubs that contain streets to explore. Taking in some of Arkane Studios’ DNA, players are free to jump around and explore these hubs to discover secrets, hidden pathways and bonus content. It’s a decidedly more extensive experience than previous Wolfenstein games and lends itself well to letting players jump quickly into bombastic action. It’s easy to get lost in the sprawling areas. It’s common for objectives to take place across the map and to leave players guessing the path to get there. For some reason, players can’t pull up the whole map but instead must rely on the small section shown on the mini-map. Guessing what way to take only to hit a dead-end can be frustrating and could have been alleviated by giving players a dedicated map to follow.

Perhaps the most significant change to the formula is the introduction of co-op. Players take on the role of Soph and Jess, though there’s no difference between choosing one or the other. The game supports drop-in drop-out play between friends or random players online. If you’d rather play solo, the AI takes control over the other sister. The partner AI does an admirable job, though it obviously isn’t as helpful as a human player. Overall, co-op is a particularly fun addition to the game, if you don’t mind the sacrifice. Co-op mandates larger arenas, which makes being stealthy trickier. A new cloak ability helps, but this is the first Wolfenstein game where stealth doesn’t feel like a viable option.

There’s also the fact that co-op makes the game too easy. When knocked down, players can easily and quickly revive each other. If both go down, one of the players can use one of three shared lives to get to revive themselves. The game off-sets this with a punishing checkpoint system that sometimes sees players restart at the beginning of the level. Aside from a steep difficulty spike at the end of the game, however, Youngblood is a relatively easy stroll through the park. 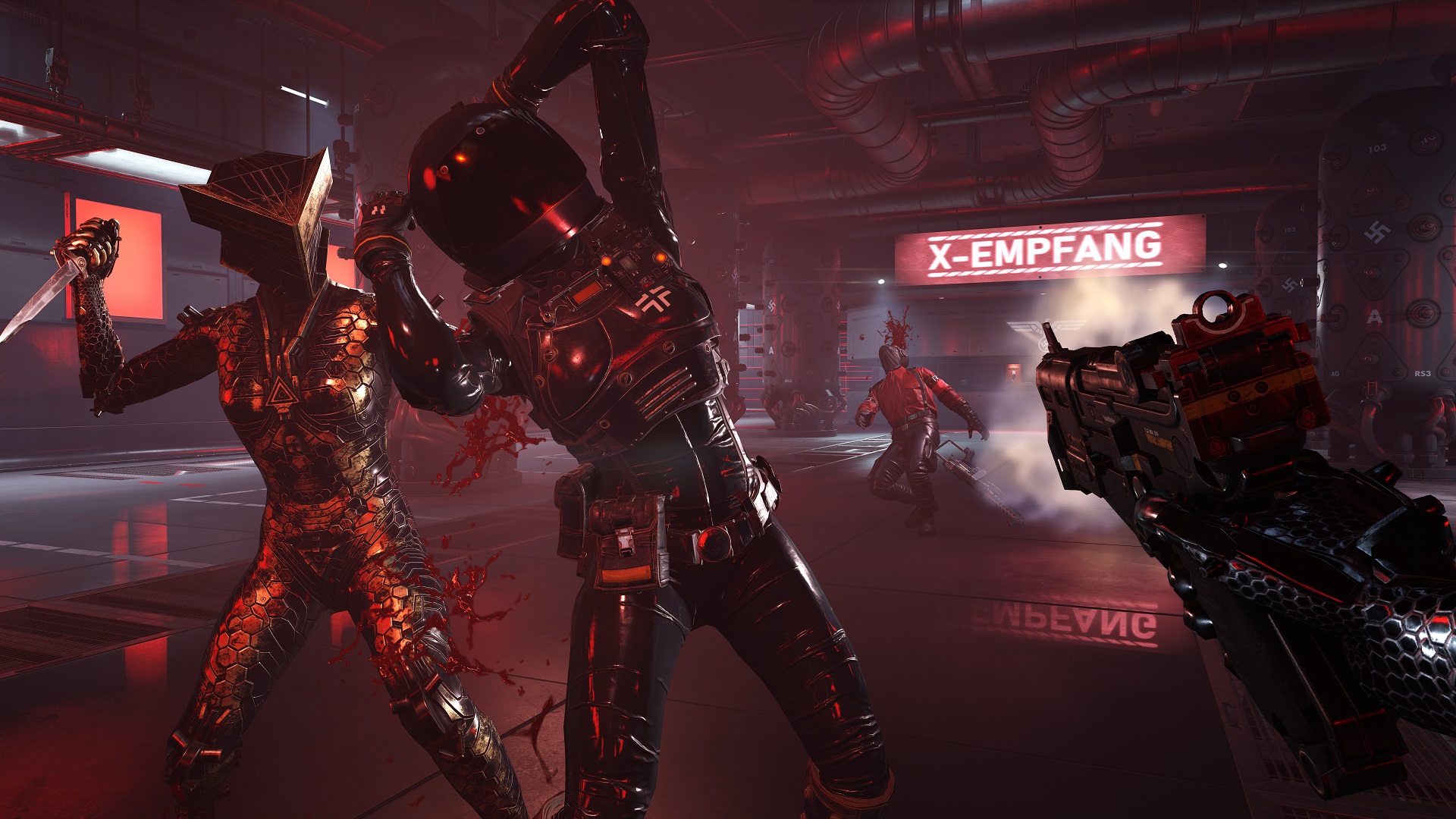 In terms of gameplay, the shooting in Youngblood is the best the series has ever been. The weapons are punchy with spectacular and a wide range of customization. There’s nothing new here as every gun was pulled from The New Colossus, but they all at least feel good to use. Bounding around the map in a power suit is intuitive and straightforward, and it won’t be long before you’re pulling off some spectacular dodges in the air. Unfortunately, the gameplay is slightly brought down by the introduction of RPG mechanics, which of course means bullet-sponge enemies with levels and healthy amounts of armor.

The available weapons are split in half, with half doing damage to a specific type of armor and the other half the other kind. It gets surprisingly tedious switching between weapons, mostly because Soph and Jess can’t carry much ammo per gun. Games like Destiny and Borderlands can support these types of enemies because they give players tons of ammo to deal with every threat. Wolfenstein: Youngblood doesn’t do that, forcing players to scrounge for more of the correct ammo continuously.

Youngblood’s new RPG mechanics also find their way into the progression system, which is either good or bad depending on your preferences. In the previous games, new perks and abilities were unlocked as B.J. completed specific tasks. Players were encouraged to try and master different play styles in the pursuit of improving their character. In Youngblood, everything is broken into different trees and unlocked through skill points. It doesn’t encourage different play styles like the previous system, but it does help prop up Youngblood’s bombastic gameplay. 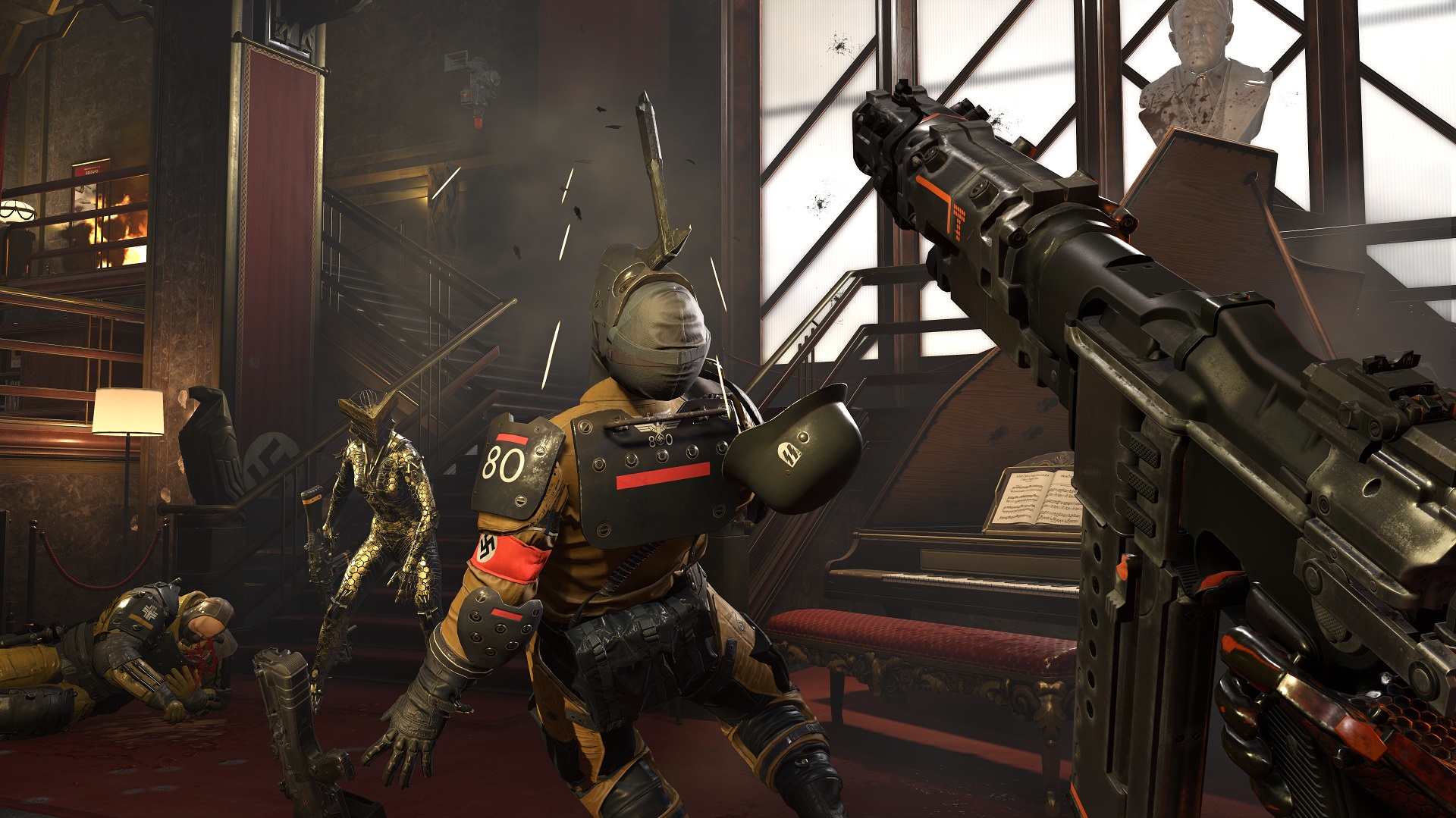 Wolfenstein: Youngblood looks the part visually with some good attention to detail. Guns, characters and environments are pleasantly detailed. MachineGames’ flair for cinematography is on full display in the few cutscenes we do get, which are a real treat to watch. Overall, if you liked the look of The New Colossus, you’re going to enjoy looking at Youngblood.

Unfortunately, the game could have used some extra polish. Framerate drops were frequent both in-game and during cutscenes, and visual glitches such as disappearing guns popped up every now and again. Perhaps the worst was an audio glitch that would cut out all audio during an entire level. Considering how vital enemy placement is, losing audio at any point is not good. Wolfenstein: Youngblood looks good, but it could have used some additional polishing. 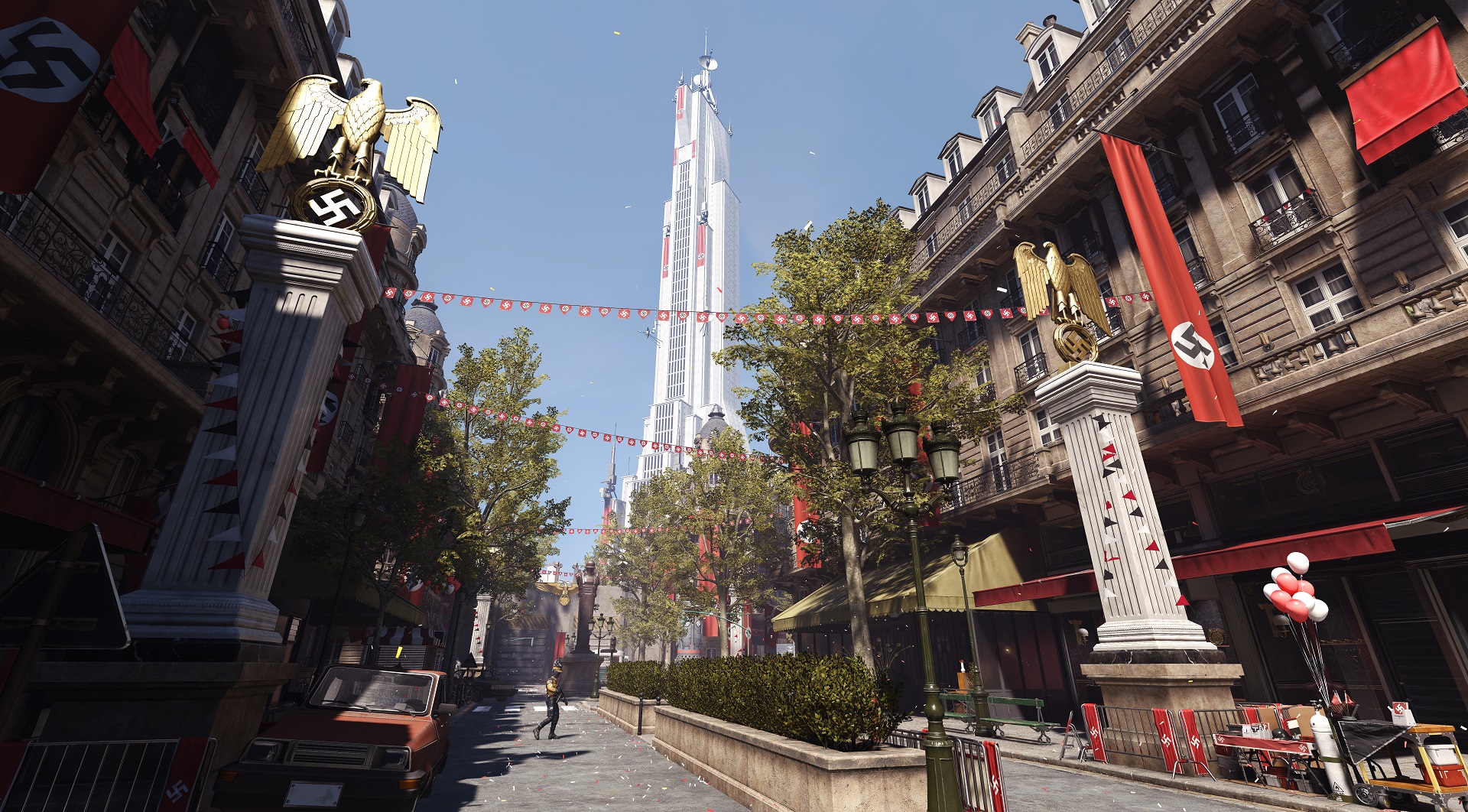 Wolfenstein: Youngblood begins with Soph and Jess killing their first Nazi and ends with both caked in blood from their conquests. The co-op action of Youngblood may be a complete reversal of many of the previous game’s core gameplay mechanics, but it’s a fun, bombastic time. The new hubs, while empty and lifeless, provide a fresh way to interact with a Wolfenstein world. The story suffers tremendously from this open approach, but MachineGames provides plenty of shootouts to spectacles to keep players engaged. Gunplay has never felt better, but the bullet-sponge nature of the enemies and lack of necessary ammo dilute what is otherwise an enjoyable game to play. Wolfenstein: Youngblood is a different beast from its predecessors. While some of it works, other aspects fall flat. Youngblood is a fun distraction with a friend, but if you want the full Wolfenstein experience, you’ll need to wait for Wolfenstein III.