It’s difficult to get away from the influence of either Brave New World or 1984 when it comes to creating dystopian fiction. While both 20th century novels are considered to be two of the most important novels in the genre, if not in all of literature (and for good reason), the sheer reliance on both novels’ intentions and concerns have descended somewhat into little more than cliche and/or tired tropes with a lot of contemporary media. That’s not to say that Paranoia: Happiness is Mandatory doesn’t itself rely on these same concepts prevalent in both Brave New World and 1984 alike. There’s the color-coded, forceful segregation of individuals into groups a la the former, as there is the looming omnipresence of surveillance, complete with signatory massive screen at the game-hub’s center, much like the latter. But unlike other media like movies and TV, video games can at least stand above the references and influences (no matter how rehashed) in that their very interaction can be an end in of itself, let alone a means. Or at least, it has the potential to.

Even if this is an adaptation of the traditional board game of the same name, the joint efforts of developers Black Shamrock and Cyanide Studio don’t veer too far into one specific direction for its presentation to come off too reliant on such repeated cliches. There’s that bleak, dark-industrial hum of Alpha Complex’s interior, but it’s not a crushingly-oppressive kind of aesthetic. Likewise, the illuminated gleam and somewhat-slick attire of the base similarly avoids over-indulging in that crisp, clean, corporatist “utopian” visage of pre-90’s sci-fi. There’s a pleasant middle-ground here — one caught between faux-sleekness and pungent filthiness — and the likely reason for this balance-act lies in the game’s more central intentions in providing that same brand of quirky CRPG/simulation gameplay that PC players are sure to take to with intrigue. 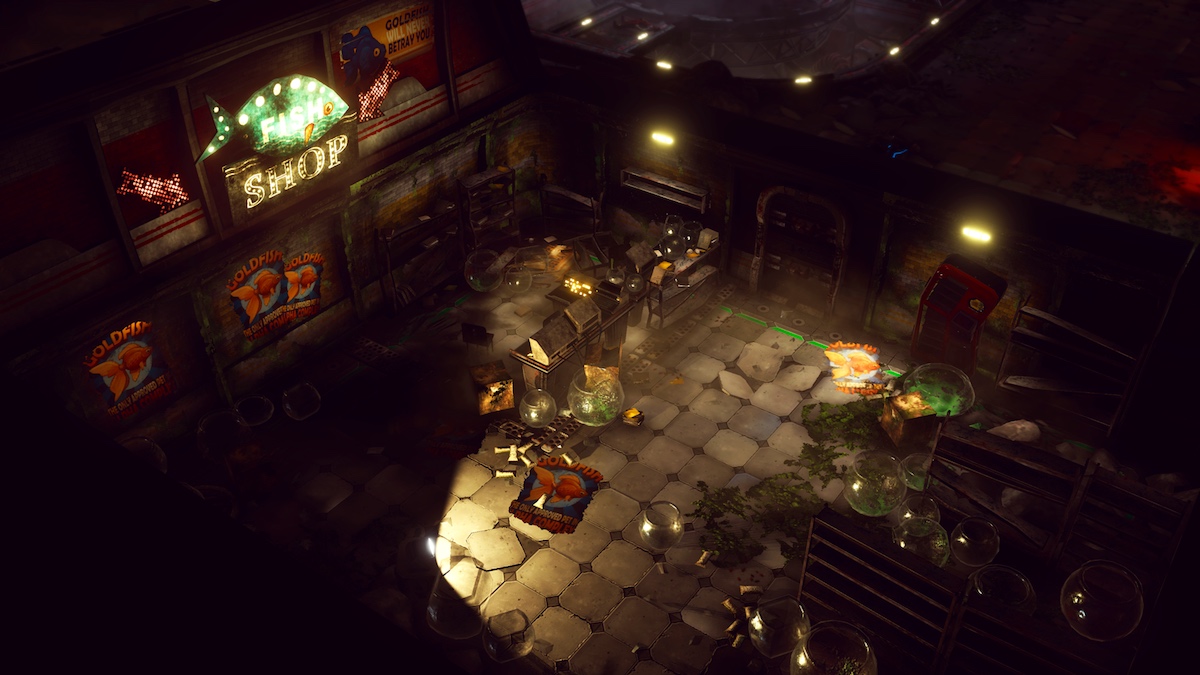 The supposed humor and black-comedy antics might not be as prevalent or apparent as you might expect, but Paranoia: Happiness is Mandatory still makes the effort to provide a real-time RPG that employs both tactical cover-based actions and thoughtful decision-making, as players scout out various parts of the base under the supervision of Friend Computer. The gist of the game’s progression is that players take on varying objectives set out by the base’s AI and this often takes on the form of clearing out a set number of rooms and sectors in order to reach a pivotal spot. While it may not entirely be a “fog-of-war” style approach when it comes to moving tactically through the complex, given visibility is limited to the only room you currently reside in, players are required to prepare themselves for any form of encounter that may be lurking in wait past the next door or even around the corner of that very same long-stretch of corridor.

Regardless of whether or not the game will later provide additional challenges that further reduce visibility through some temporary condition or ailment, what stops this approach from feeling perhaps a touch unfair to some comes by way of the temporary shift to turn-based like freezing of time. Action does still play out in real-time — allowing you to swiftly weave in-and-out of cover, without having to compensate or plan multiple steps ahead for the impending enemy “turn”. For those instances where an ambush may occur or an enemy simply ducks out of obstructed view, however, Paranoia still allows you to pause the action at any time and approach stand-alone moves with, hopefully, a more sound tactic. Allowing you to select one or even all your custom team of up to four units — returning swiftly to real-time without it ever feeling like you’re cheating the system. It’s not too self-defeating or too conflicted with the core real-time philosophy here and for those who would rather abide to a “true” experience of real-time encounters, the pause feature can be ignored without so much as a second glance. 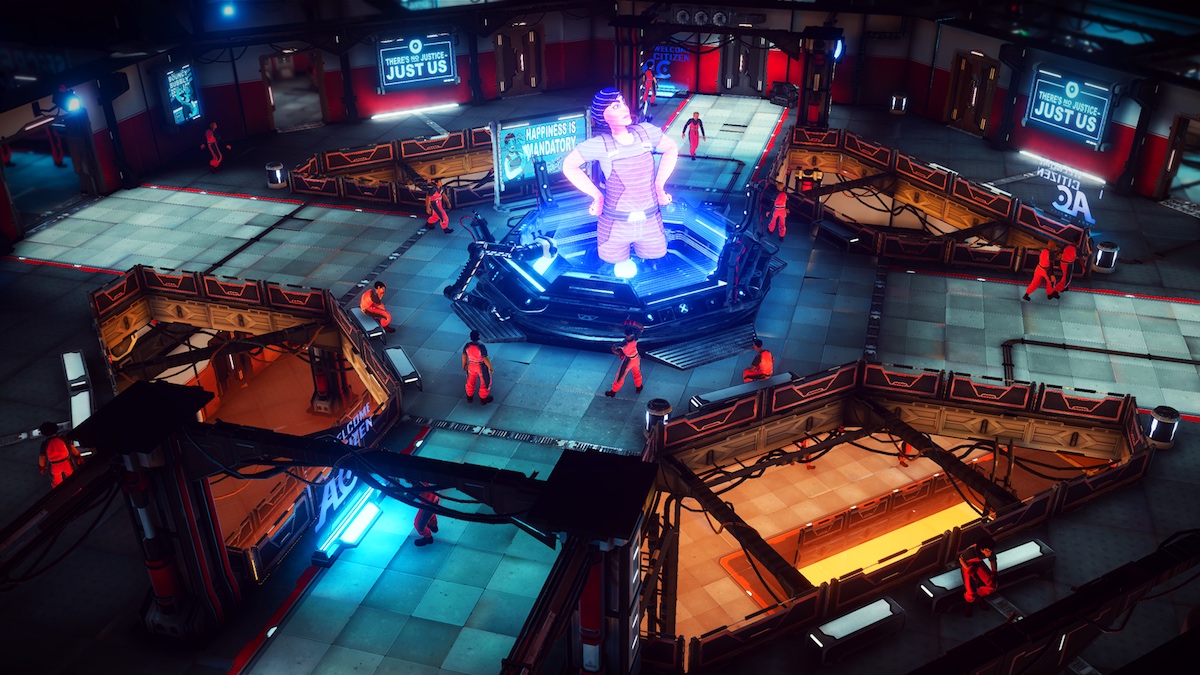 It’s welcome too that in the case of sliding through equipped weapons and items, Paranoia doesn’t incorporate any sense of RNG or risk as to using a potentially more lethal-if-risky weapon over something safer if lower on damage output. You may wonder as to the point of even taking weaker items if this is the case, but fortunately the game’s currency and requirements in purchasing such handy tools prior to a mission do mean players will likely seldom find they can so easily glide into a mission without any consideration as to how combat will be approached. The only real risk players have to take note of is in how far they, for example, throw a grenade or how their aiming reticle lines up. And for PC players, this is simply a case of pointing to the required target and moving onto the next command. Paranoia‘s combat, as a result, is swift and relatively simple-enough to manage, particularly when moments can indeed boil down to ducking behind cover.

A large portion of the game time outside of engaging hostiles, however, is spent simply exploring Alpha Complex — potentially seeing how much one can get away with by, for example, stepping into unauthorized regions of a room of corridor, as denoted by color-coded, sectioned-off parts of the interior. NPCs that litter the interior will of course offer brief passages of conversation and opinions pertaining to the premise, but the small, blue-colored — and perhaps insignificance — presence it poses, or lack thereof, would have you believe this is an insignificant element of world-building. That might not entirely be the case, but it’s unclear on whether or not the developers would like to have you take notice of this brief chatter or not. 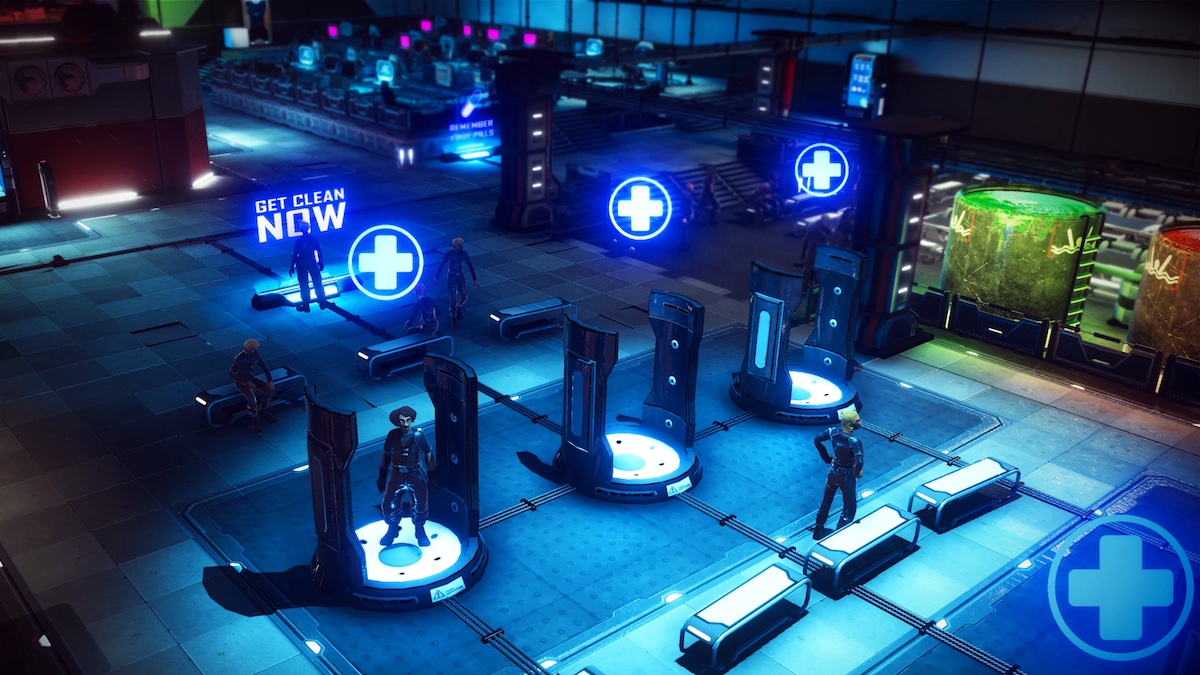 Even so, the absence of any real on-the-nose tone or immediate lumping the players with many a tired visage of oppression, totalitarianism or the like, is welcome — especially considering the game’s refusal to indulge too heavily in one of the two aesthetic themes it dabbles in, just about finding a happy-medium in-between. The biggest question lies in the game’s underlining premise of having to skirt the line of compliance and going against the system, both in mission (hacking doors, for example) and outside of it, should you decide to explore further the existence of many a faction group tucked away amidst the game’s surroundings. Nice it is to see a piece of dystopian fiction that doesn’t try, so painfully and desperately so, to underscore its “oh-so terrible” scenario, it’ll be curious to see how well its core loop of real-time (with a freeze-frame sprinkling of adaptive decision-making) combat, alongside its simulation-like daily antics, can move beyond the presentation and expand past the initial first couple of hours. Paranoia: Happiness is Mandatory is planned to release across PC and consoles sometime later this year.