The ’90s were a weird decade.  The internet was taking shape, gaming was hard at work regaining its mainstream status after things fell apart in the ’80s, and somehow wearing a giant clock on a massive chain was viewed as stylish.  Toe Jam & Earl were two hip hop aliens crash landed amidst the weirdos of Earth, and while very much a product of their time, the game they starred in was also a decade or two ahead of the curve thanks to random maps and focus on co-op play.  After two sequels the series sputtered out, only to come back to life due to a successful Kickstarter.  Toe Jam & Earl: Back in the Groove embraces the silliness of its ’90s roots while using all the internet-magic of today to allow four-player online co-op, with everyone sharing in the power-ups on the trek to rebuild the spaceship and return home to Funkotron.  Limited Run Games produced the standard physical version, which had a good long presell window, plus a Collector’s Edition which was only available for a short period of time due to its small print run.  Today’s unboxing cracks open Toe Jam & Earl: Back in the Groove Collector’s Edition to see what’s inside.

First up is the giant box everything comes packed in, which is designed to look like one of the many presents scattered throughout the game.  It’s fairly huge, leaving a good amount of unused space inside, but practicality is irrelevant compared to the opportunity to hold an actual/replica Toe Jam & Earl present.  The mostly-pink box doesn’t have a single 90-degree angle on it and it’s held shut by a yellow band with the game logo on the front.  The band is just held in place by clear sticky goo-pads, easily removed, allowing the top to open up and reveal funky tissue paper covering the insides.  It’s a fun design that keeps the “present” theme going to the very last second. 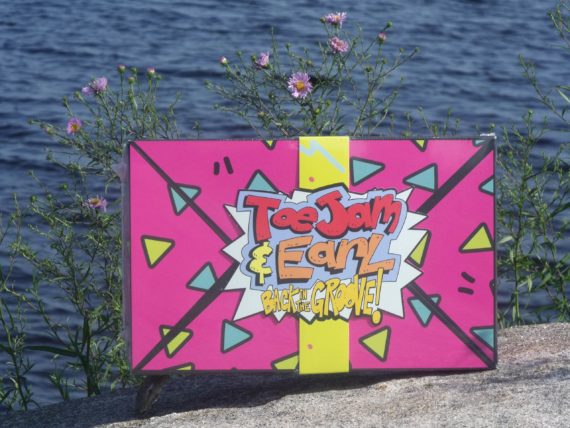 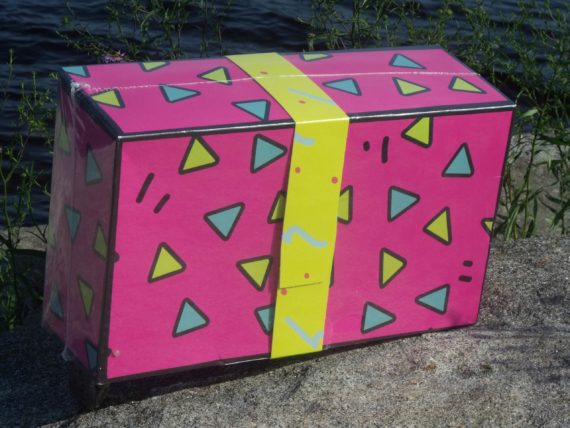 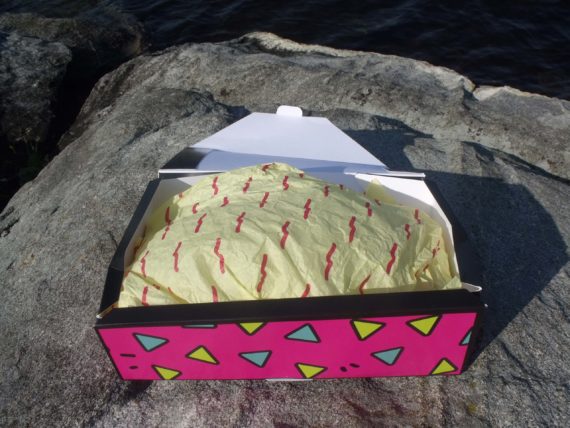 Once the tissue paper is removed the game and its pins are revealed on the first of two tiers of goodies.  Four of the pins are predetermined, the main characters of the game, while the others come in blind boxes that give two out of six Earthlings.  On the one hand there are a lot of pins to play with, but on the other it’s 3/5 of the entire collection and they’re now sold out.  Below the game and pins comes the poster, soundtrack cassette and finally the playset, which is a 25 piece puzzle that assembles into a map plus punch-out stands and props to populate it with. 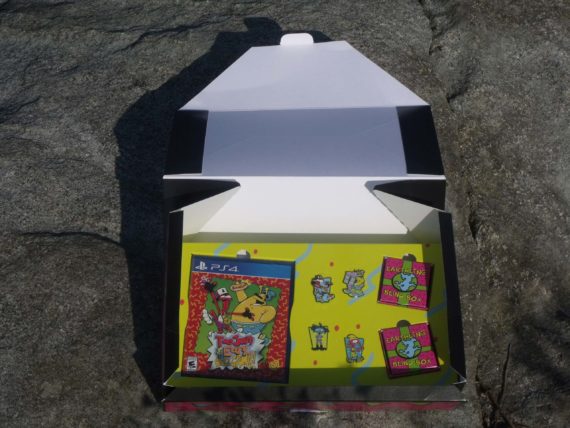 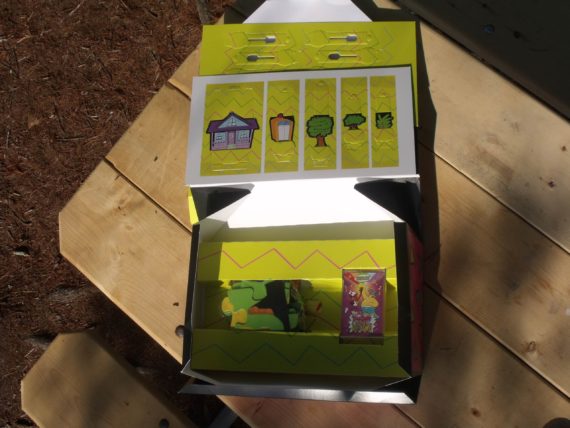 The poster is the simplest item in the box and here it’s held in place by the stiff breeze coming off the lake that necessitated moving from the rocky island I started on (literally a very big rock poking out of the water) to a different island with more cover.  Turns out it’s not particularly practical to photograph lots of paper product in the wind, except in very specific circumstances. 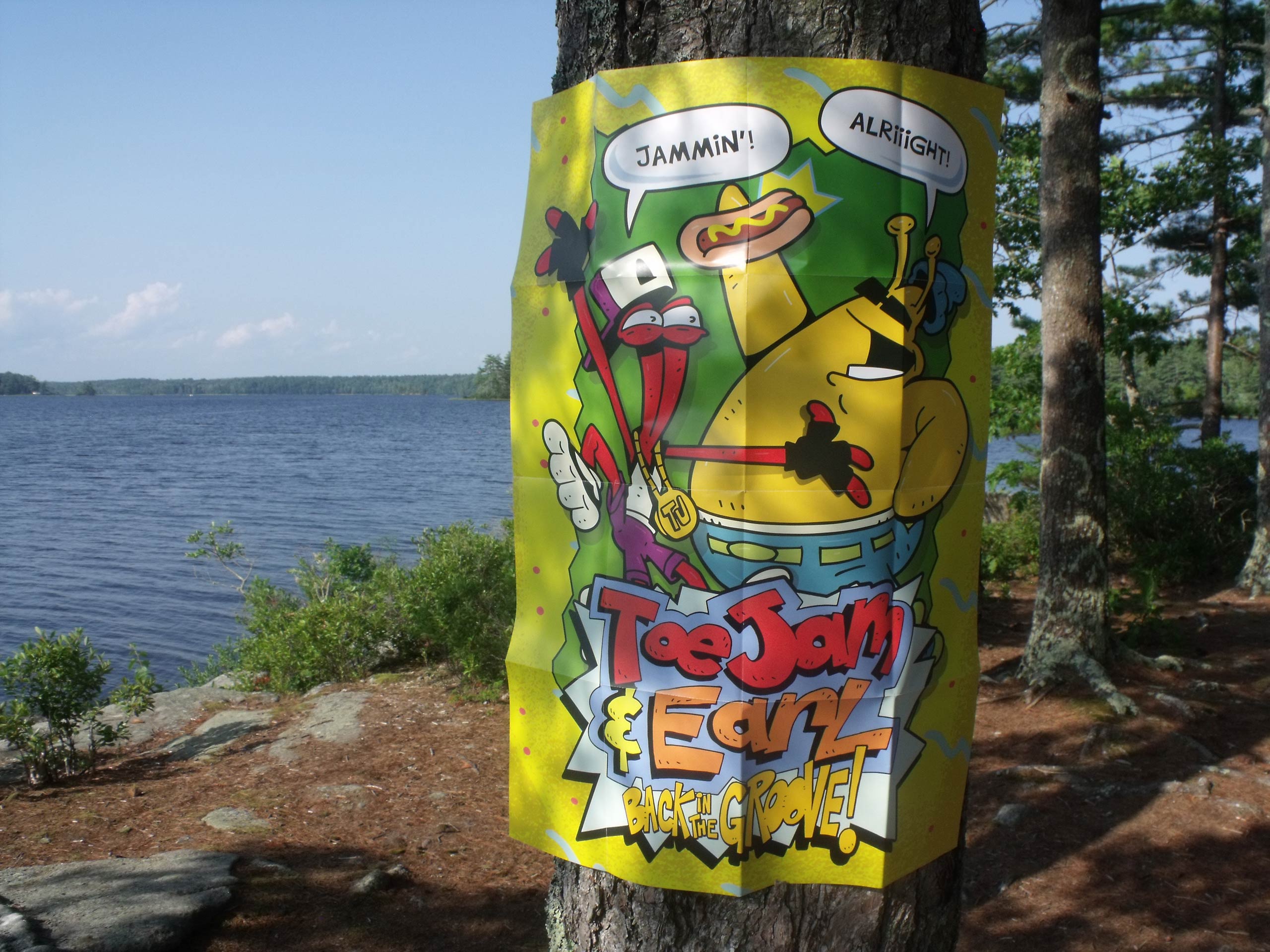 The puzzle is fairly easy to assemble, with the pieces stacked on top of each other in order of assembly.  Once connected it’s time to start decorating it, which is where the pins come in.  My blind boxes were the ice cream truck and Wise Man, and the boxes are designed to make them easy to remove.  The stands pop out of the cardstock easily and a few simple folds turns them into a triangle, with the groove in front letting you slide the pin’s two pointy bits in place while the notch in the back lets the rubber protectors on by.  Assembling the props is just as easy and then you can make your own little Toe Jam & Earl level to display with pride.  When done it all packs up easily, and while the telltale signs of punching out the pieces and folding them into shape may not make the collection mint anymore, it does shows the game was loved. 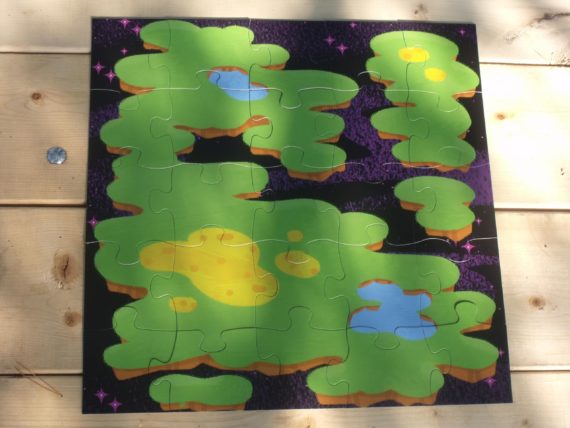 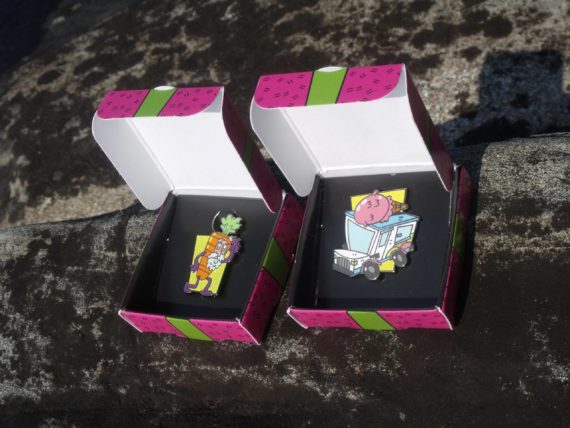 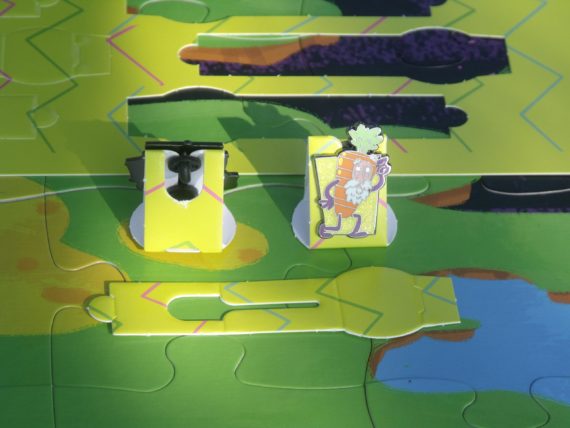 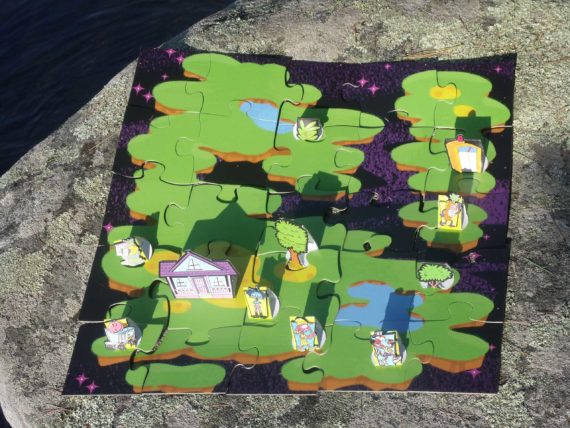 Next comes the poor soundtrack cassette, which is an incredibly fun part of the package until a stray gust of wind knocks the case into a lake.  Thankfully the actual cassette was sitting on the rock at the time, so the only casualty was the paper insert. 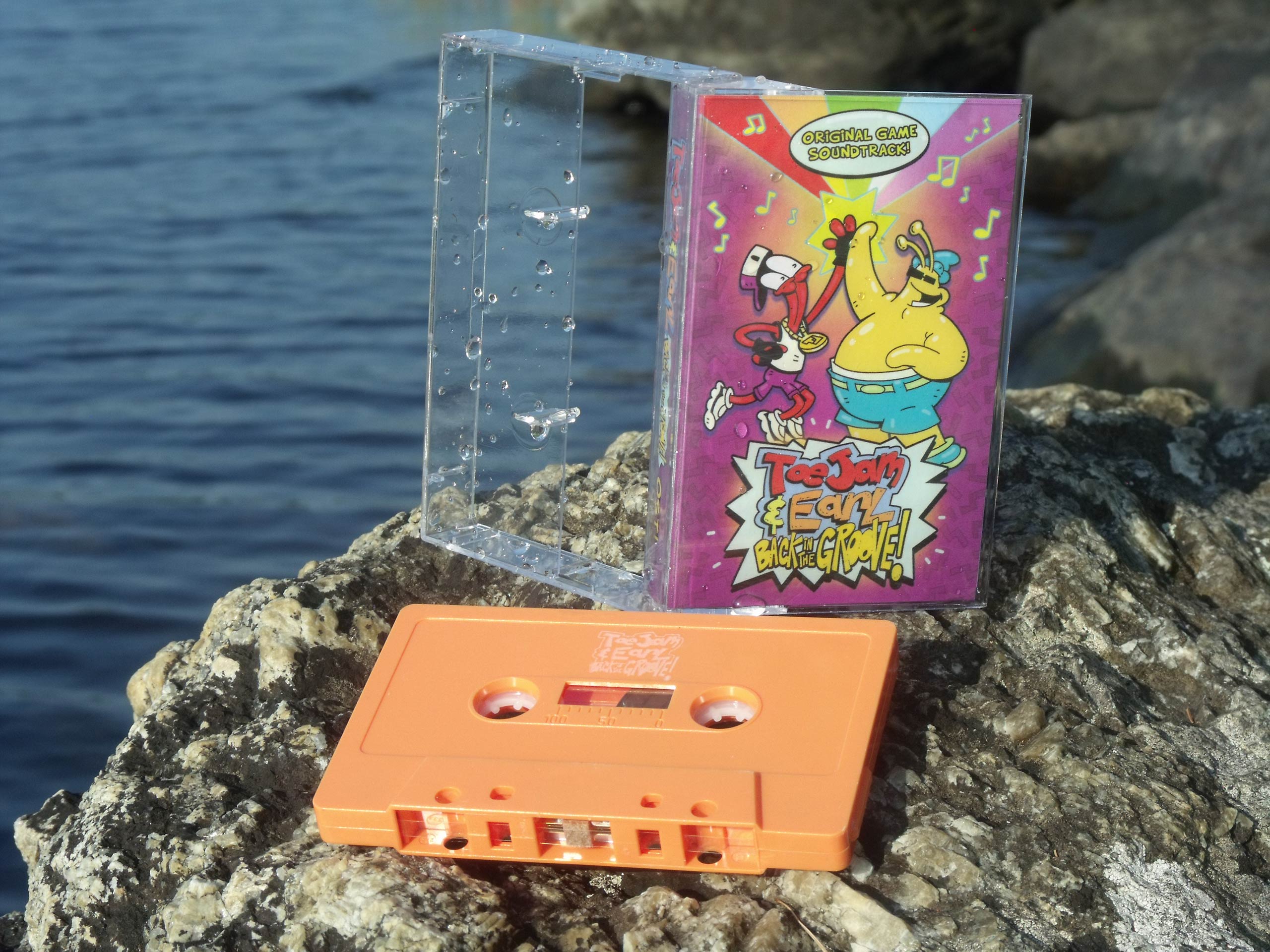 Finally comes the actual game, which was the reason for the whole collector’s edition in the first place.  The cover is reversible, with a modern-styled version on one side and a Genesis throwback on the other.  The manual is surprisingly huge, clocking in at 76 pages including the cover.  It details all the playable characters, Earthlings, presents and other gear in the game, for those who want to know rather than discover as they play. 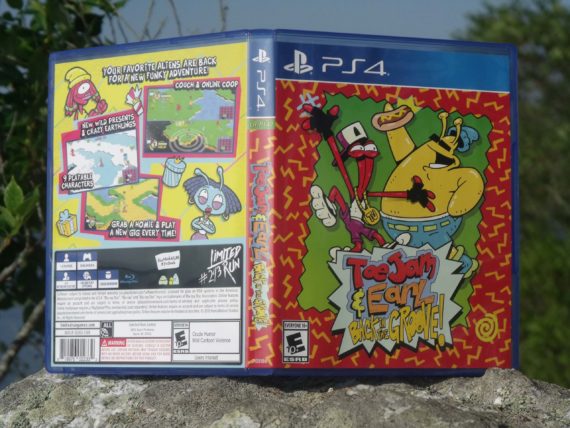 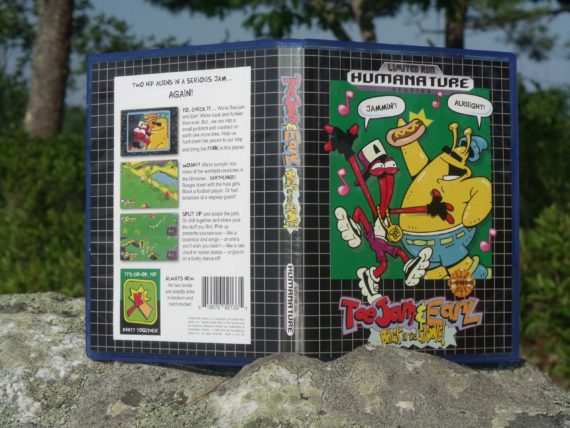 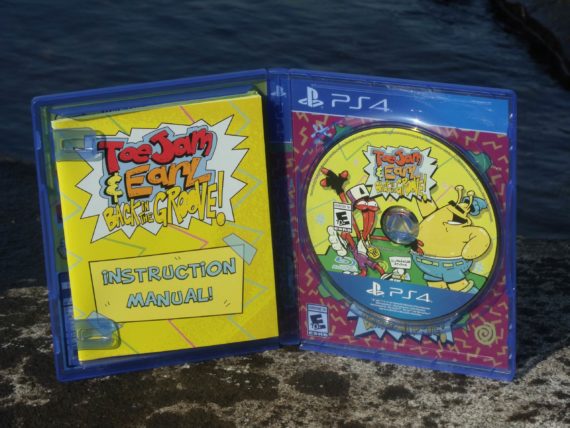 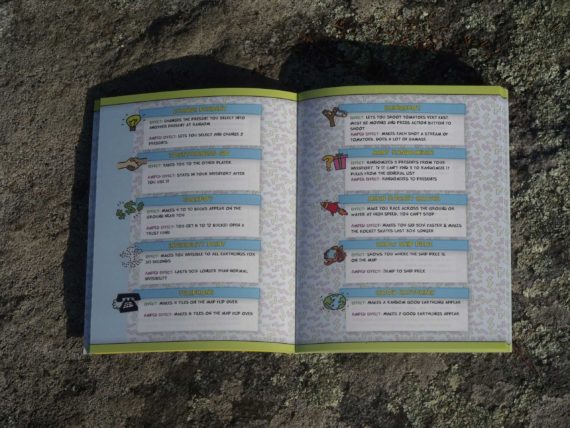 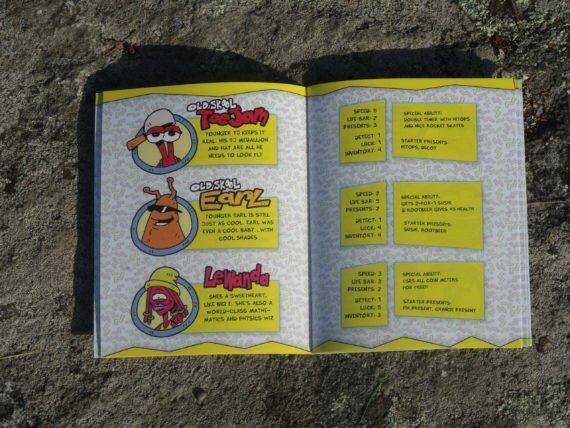 Toe Jam & Earl: Back in the Groove is a well-deserved revival of a classic series.  It brought back the original game and expanded it with new everything, from items to Earthlings to secrets, focusing on replayability and co-op with friends both in person and online.  As the return of long-time fan favorite it absolutely justified the Collector’s Edition treatment, and placing everything inside a game-scale present makes the entire presentation feel special.  There’s a real sense of playfulness with the goodies inside, especially with the way the pins turn into props for the jigsaw puzzle playmat, that fits perfectly with the tone of the game.  Toe Jam & Earl: Back in the Groove may take up a huge chunk of shelving real estate, but it’s a must-have for any fan of the series.