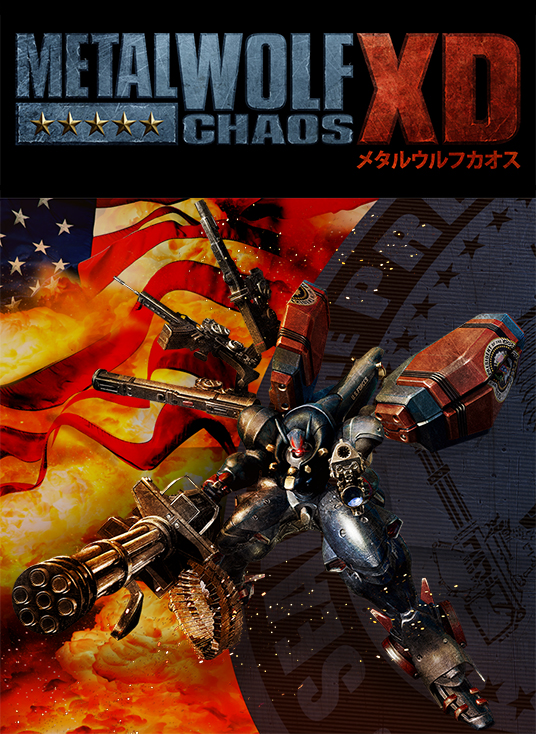 Years ago there was a great injustice as the most patriotic, flag-waving, red white & blue, eagle crying a spangly star-shaped tear of all-American-pride game ever made somehow didn’t manage to actually come to America.  Metal Wolf Chaos was hyper-Americana put through the lens of Japan’s pop culture and the result was epic beyond all belief.  Also cheesy beyond all belief, but that just amplified its epic-ness.  President Michael Wilson is ousted from office by the traitorous Vice President Richard Hawk and the only option to restore capital-J Justice to the nation is through the heavily-armed mech Metal Wolf.  It doesn’t have to make sense when the result is a cross-country tour blasting through the corrupted military of a government working against its people.

Metal Wolf Chaos XD is a remaster of the Xbox original, touching up the art and lightly tweaking the gameplay while adding support for widescreen and HD resolutions.  The point of the remaster wasn’t to rebuild Metal Wolf Chaos but rather make it available to play for an audience who never got the chance, which means it won’t be winning any awards for looks.  It’s more than serviceable, though, and even the 30FPS framerate doesn’t cause any problems in the flow of the action.  It plays fine, most of the technical issues I was going to rag on it for got cleared up twenty minutes before I started writing (the “invert aim” function still doesn’t swap up/down), and most importantly the new version restores life to a cult classic that deserved better than to be forgotten.

What makes Metal Wolf Chaos XD work is its utter commitment to the madness.  The game opens with President Wilson bursting out of the White House in his overpowered mech, facing off against soldiers and a few helicopters as he makes his escape.  The initial loadout is fairly weak, but Metal Wolf can handle four weapons per hand so there’s a good variety of options to build the perfect arsenal.  Pistols are weak but come with a huge amount of ammo, machine guns and assault rifles provide a nice damage-per-second stream of fire, shotguns and missiles pack more punch per shot, etc.  A few of the weapon types are more for fun than serious use, such as the multi-missiles that scatter everywhere and just might (maybe) hit an actual target, but it’s always nice to have something ridiculous in the arsenal to provide a little variety from the go-to weapons. 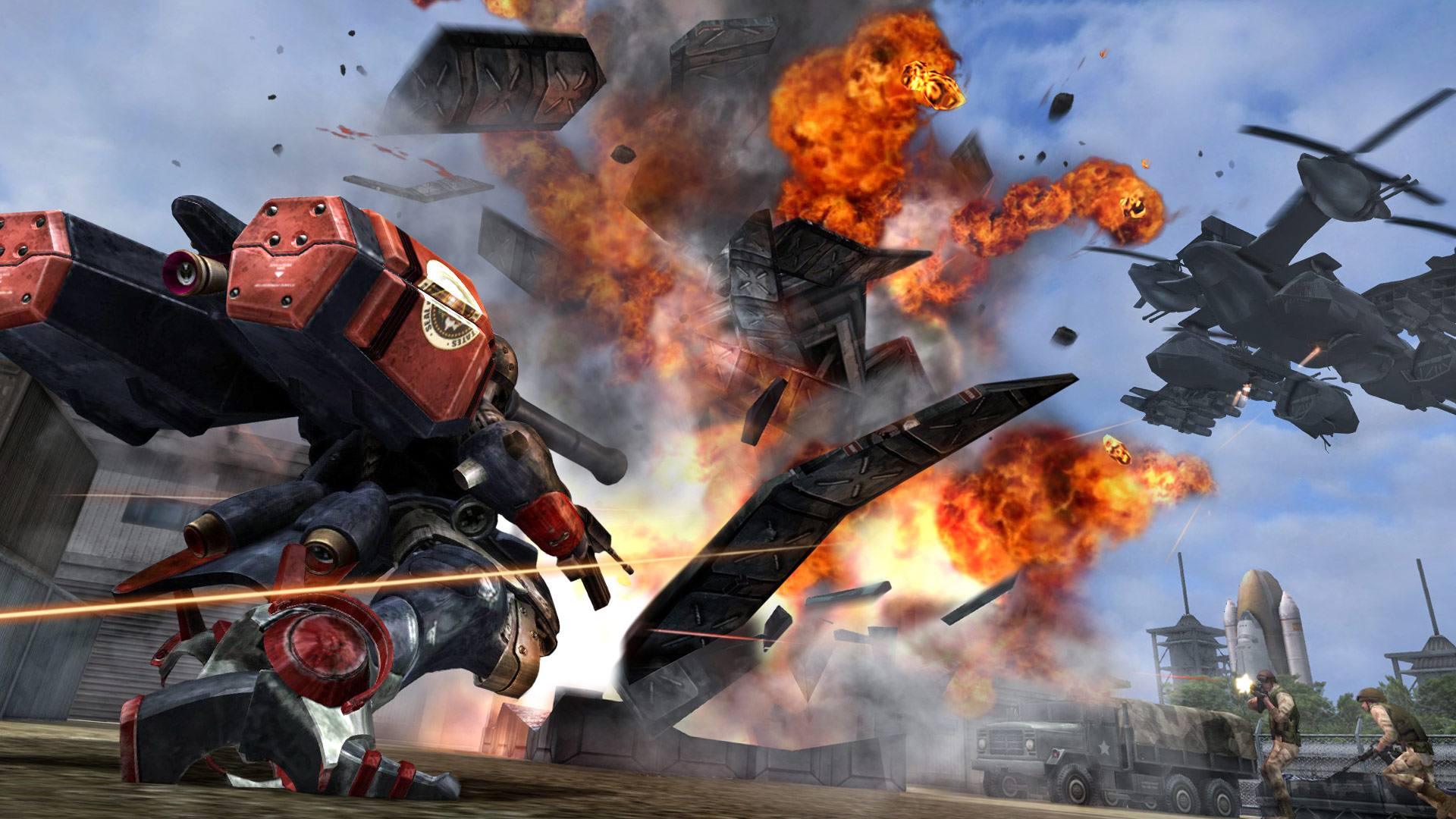 Once on the White House lawn President Wilson breaks out the firepower, taking down everything between him and the entrance to the underground bunker where Air Force One is waiting.  It’s a good shooting gallery to get used to the controls, with no real threat to be found, and it lets you get used to having two aiming reticles and fire buttons.  The right trigger shoots the right hand, left trigger for left hand, and either button will do for two-handed weapons like the sniper rifle.  The starting shotgun has a wide spread, which is why its aiming square is so large, but later models might have a wide but flat area of effect, or a surface-to-air missile would have a tall one.  Thanks to a generous auto-aim a larger reticle tends to be better, so a machine gun can do a better job of targeting incoming missiles, but as a rule it’s not more complicated than point and shoot.  And keep an eye on the ammo supplies so your favorite gun doesn’t run empty just when you’d need it most.

While focusing on the enemy is always a good idea, the environments are filled with destructible scenery that’s also worth taking out.  Large gun towers and other major points on the map are obvious targets, but shipping crates, military and civilian vehicles, and even smaller buildings all break apart nicely with enough damage.  The smaller items shatter easily just by using the Metal Wolf’s dash to tear right through them, but bigger, tougher targets can soak up a good amount of firepower.  It’s worth the ammo, though, because not only does it add to the destruction bonus at level’s end but that’s where the power-ups are found.  Extra ammo is always helpful, but collecting enough power units to permanently earn a point of health goes a long way towards making the later levels survivable.  The last major destructible target in the levels is the mini-prisons where hostages are being held and it’s important to only use smaller arms to blast them open.  Apparently a bullet strong enough to tear through a tank won’t hurt a civilian, but a rocket is just a little too much force in one place.

At level’s end the various bonuses all get tallied up for score and other rewards, and this is how Metal Wolf gets strong enough to tackle the later challenges.  Researching new weapons is expensive and the rare metal found throughout each level is necessary to build them.  It’s worth noting that progress goes a lot more smoothly when focusing on a specific weapon category rather than upgrading everything evenly, because the popcorn soldiers from the White House opening level are very quickly joined by tanks, gunships, bombers, mini-mechs, and any number of other military threats.  When you’ve only got five minutes to tear through the streets of Chicago before it’s asphyxiated by poison gas you’ll want at least one high-powered gun to take out the enemy strongholds as quickly as possible.  Thankfully each level is designed with replay in mind, so you can go back and free the remaining hostages, find missing power orbs, and earn enough for the shiny new weapon of your dreams. 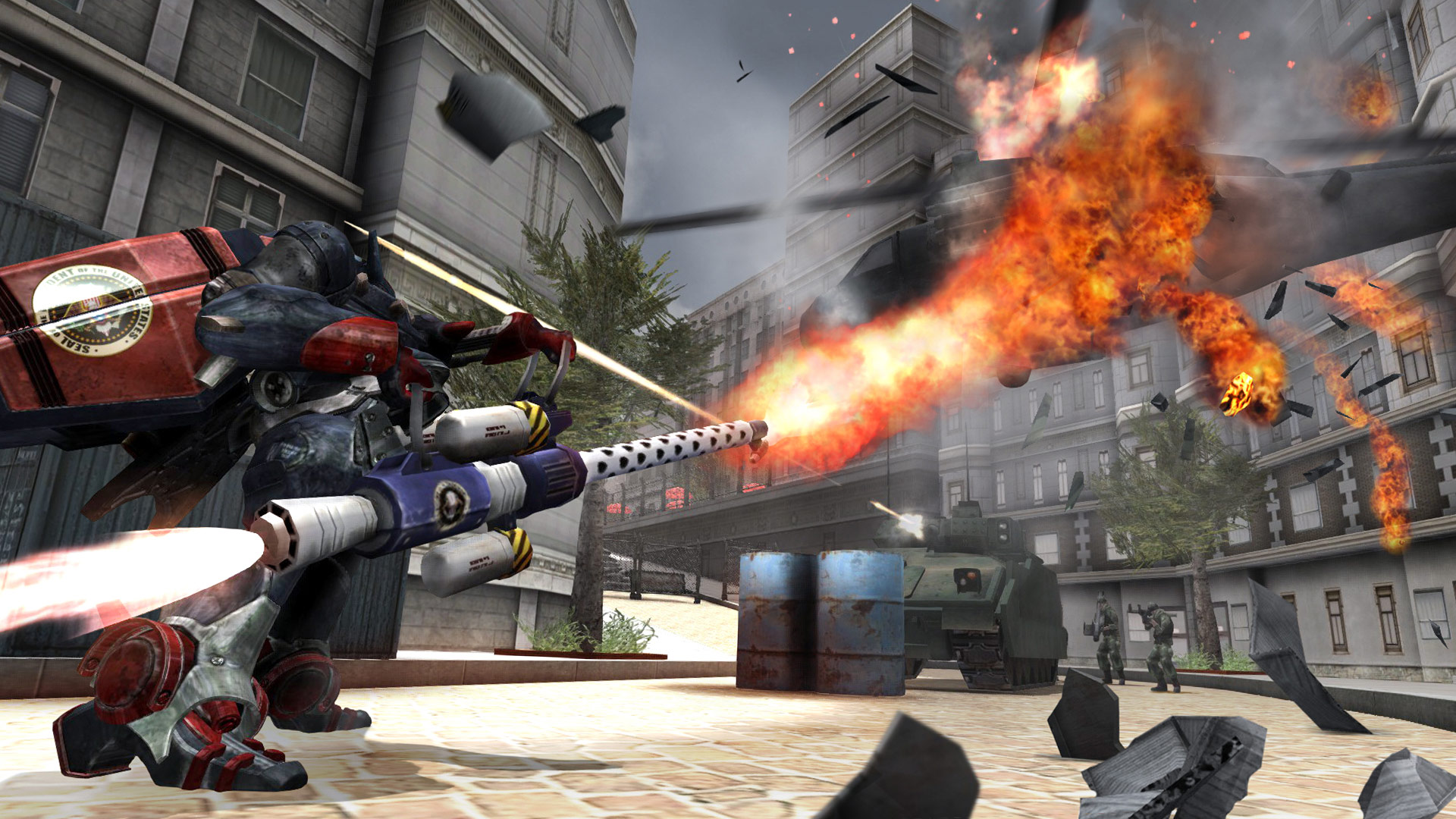 Metal Wolf Chaos XD is an exercise in pure Americana filtered through the cheesiest anime imaginable.  The banter between President Wilson and his assistant Jodie Crawford is rarely serious, Vice President Hawk is a pure cartoon villain with a character design that would almost be at home in Metal Gear Solid, and the action starts off over the top and escalates from there.  Each level is its own unique challenge, whether it’s carefully dashing from one side of the Grand Canyon to the other and back again, dodging bombs as they fall on Miami Beach, or racing against time to prevent the giant raygun of Alcatraz from frying San Francisco.  President Wilson will see the country restored to its former glory with the Justice in his heart protected by the toughest mecha-armor a President could hope to pilot, bringing hope and truth back to an America that has seen better days.