WWE has released a ton of information about WWE 2K20 today, showcasing the 2K Originals mode and some of the new creations for it. In keeping with some of the supernatural touches the series has seen – with last year’s Woken/Broken Universe stuff and zombie HHH being some of the most memorable, the Bump in the Night pack has been announced. Horror-themed versions of Bray Wyatt, Finn Balor, “Frankenstrowman”, Aleister Black, Randy Orton, Sheamus, Nikki Cross, and Mandy Rose. The horror version of Wyatt is a variant of him being a bit like Swamp Thing and looks pretty neat. The actual story is a bit odd, but fitting with the game’s October release being alongside Halloween.

The roster featured here will have unique voiceovers for the pack alongside new commentary, and Tower mode is back with their own story – so the usual match tower from 2K19 is back with a redone format so you have some context to the matches. The pack will be available for $15 on its own, or part of the larger content pack and this pack will be free with pre-orders. New arenas will also be in the horror pack with a cemetery brawl area and a ring inside of the swamp area. New creation parts will be available for the roster, arenas, new weapons, and even moves. This makes pre-ordering a pretty smart idea as you get a lot of content essentially for free, and that includes the all-new “Fiend” Bray Wyatt character from Summerslam. WWE 2K20 will be released on PC, PlayStation 4, and Xbox One on October 22. 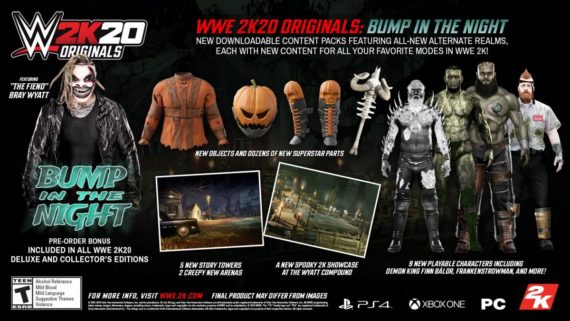