The original Battletoads was the stuff of legend when it was first released on the NES. The game challenged people in ways that were somewhat cruel and unusual in its day, but it wound up becoming an endearing and somewhat iconic release for the platform. It put Rare on the map as a major developer and still has some of the most expressive faces of any game on the platform. It received ports on the Game Boy and Genesis, and a remake on the SNES. While the ports were clearly the first game with a different coat of paint, Battlemaniacs took the idea of the first game and completely remade it on newer hardware. In just two years, it’s clear just what kind of a difference the jump from 8-bit to 16-bit could give to even a more modern release at that time.

These kinds of remakes weren’t done often, and while Battlemaniacs has some flaws in its execution, it’s still a tremendous effort overall. The story has been changed a bit to be in a virtual world, which doesn’t mean a lot beyond allowing the worlds to be more varied — and provide some in-universe context to bonus stages. That’s a little touch that shows a great level of care was taken to make sense out of things — here in this game starring battling toads fighting a leather-clad vixen. In some ways, Battlemaniacs is the grandest stage the toads ever had on consoles. 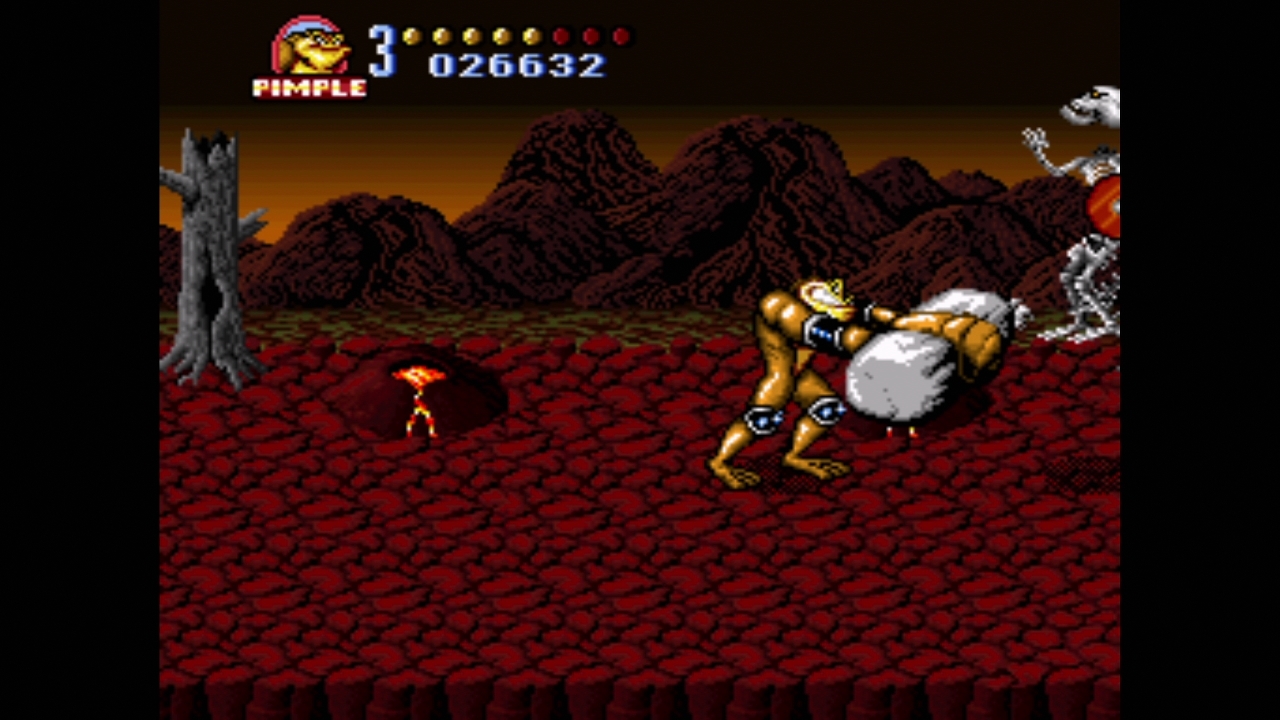 The size of the battle seems much greater than the original due to the massive increase in sprite size. Both of your playable toads and boss enemies look enormous compared to the original game, and even regular foes gain a greater sense of scale. As a result, your attacks seem even more powerful as they send enemies soaring into the sky. Enemy count itself is far more manageable here than it is in many beat em ups of the day. Those usually threw up to a half-dozen foes at you, while Battlemaniacs puts three against you at the most.

Now in single player, this still stacks the deck against the player a bit, but the game has some nice features built into it to make the journey easier. Beyond a two player mode that has either a mode to let you attack one another or not — which was shockingly rare back in the day, you also have attacks that can do damage to foes on each side of the player. This means that if two enemies saunter up to you, all you have to do is hit Y and BAM — they’re going to at least go flying if you connect with the double punch. Proper timing is a real key to survival here, because only landing it on one enemy means that you’ve got a revolving door of enemies to deal with until you nail the timing. 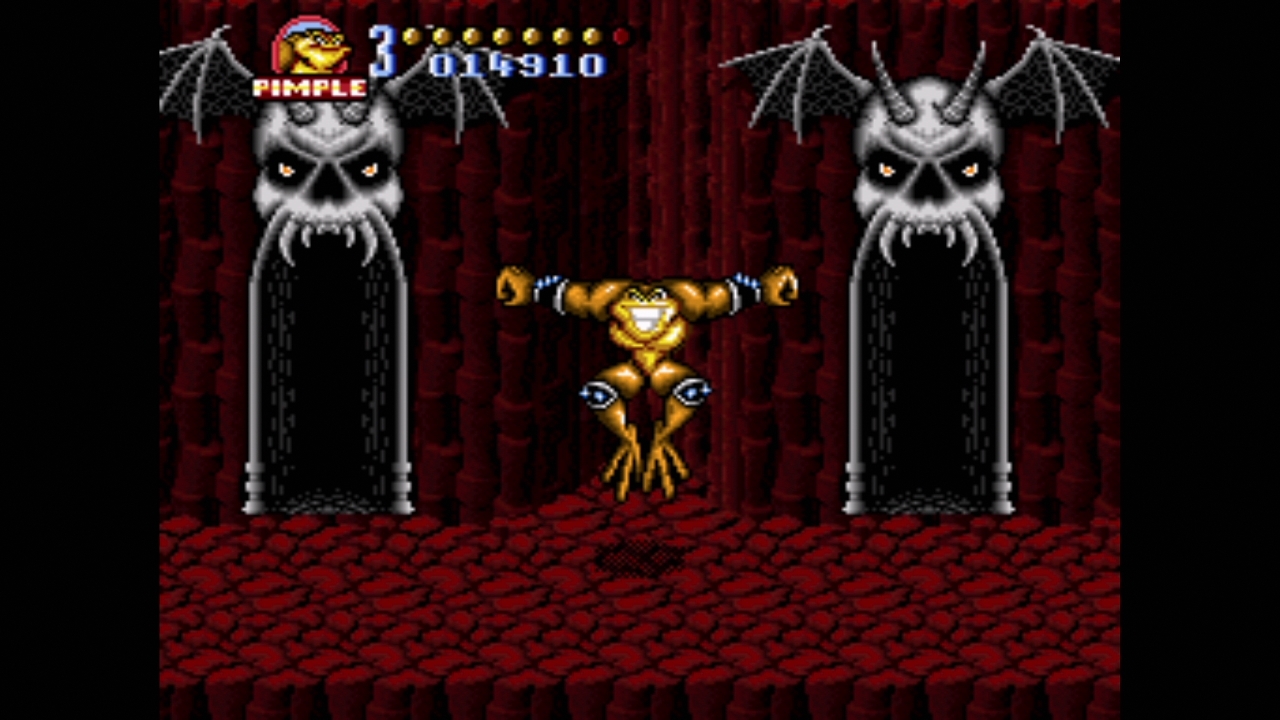 Thankfully, responsive controls make the combat a breeze. You can always mentally time out attacks easily and the animations themselves are fluid without being overly-long – -so they look great and are practical at the same time. Unfortunately, the platforming is a bit troublesome and that’s a common issue not only for this series, but any brawler that tries to throw platforming into the mix. The shadows are somewhat hard to see on-screen and that results in it being harder to see where you are in relation to the ground. This issue can also make it hard to avoid things like falling fire traps as those are shadow-based and you need to be dead-on with your positioning to avoid the flames and the massive chunk they take off your health bar.

Battlemaniacs will absolutely kick your butt when it comes to traps and that goes doubly so for things like speeder bike areas and falling spike pits. The former is something that you can learn with trial and error alongside some core platforming. Arrows help give you a bit of guidance, while the pit areas lack any kind of aids for the player beyond just speeding you up and forcing you to learn exactly how long to move in one direction while free-falling at a fast rate of speed. These areas are frustrating, but rewarding to get past after a few (dozen) retries. 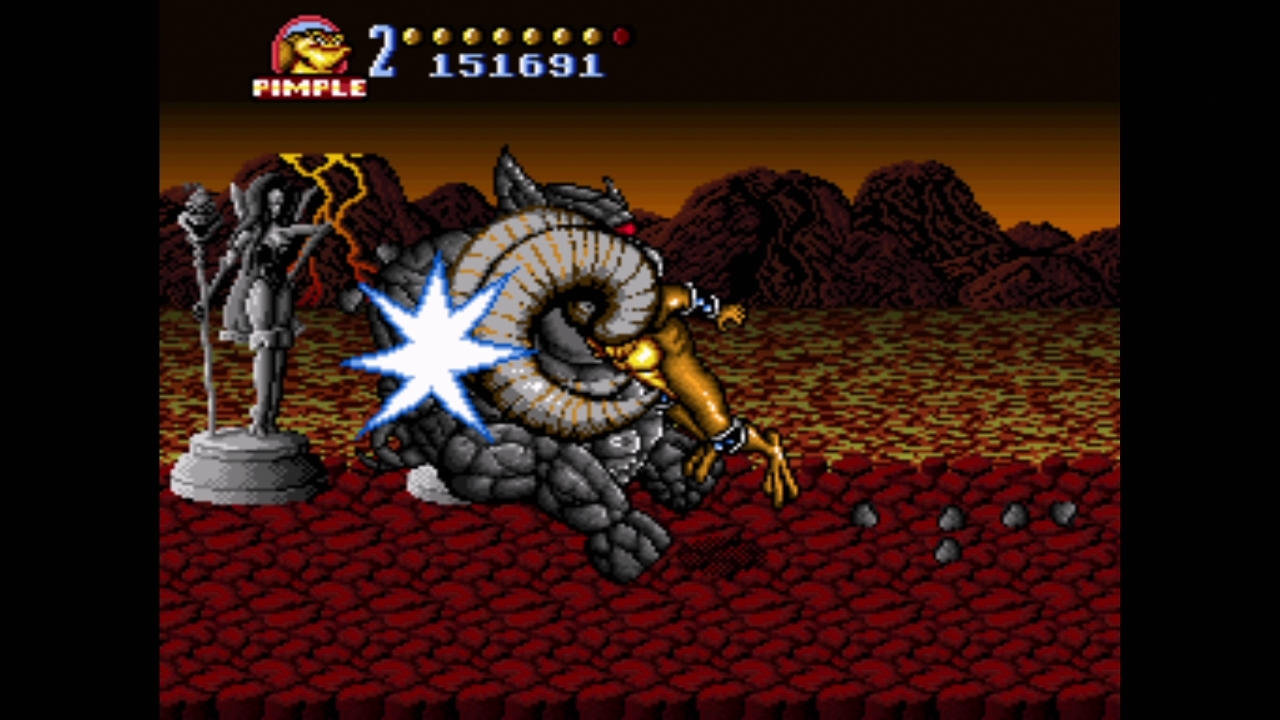 Visually, Battlemaniacs looks incredible. In its day, it was on-par in terms of sprite size with arcade brawlers and it has aged marvelously. The heavily-detailed environments, super-expressive faces and pitch-perfect animation being done so right at first are the key reasons for that. When you get something right the first time, you don’t have to go back and improve it and this would be right at home with a modern-day Battletoads game hearkening back to the 16-bit era. The only entry in the series that ever looked better than this was the arcade game — not even the Battletoads and Double Dragon game on the SNES could graphically hold a candle to it.

Battlemaniacs uses a remixed version of the OST from the original game and makes the legendary SNES sound chip sing. It offers up a more rock-centric soundtrack than before, with a bit too much reverb at times, but not as badly as many SNES games that just wound up having the music drowned out by it. The sound effect work is some of the best in the genre, with your various transformation final attacks sounding especially destructive as you either turn into things like a giant boot or grow horns to destroy and potentially slice up enemies. 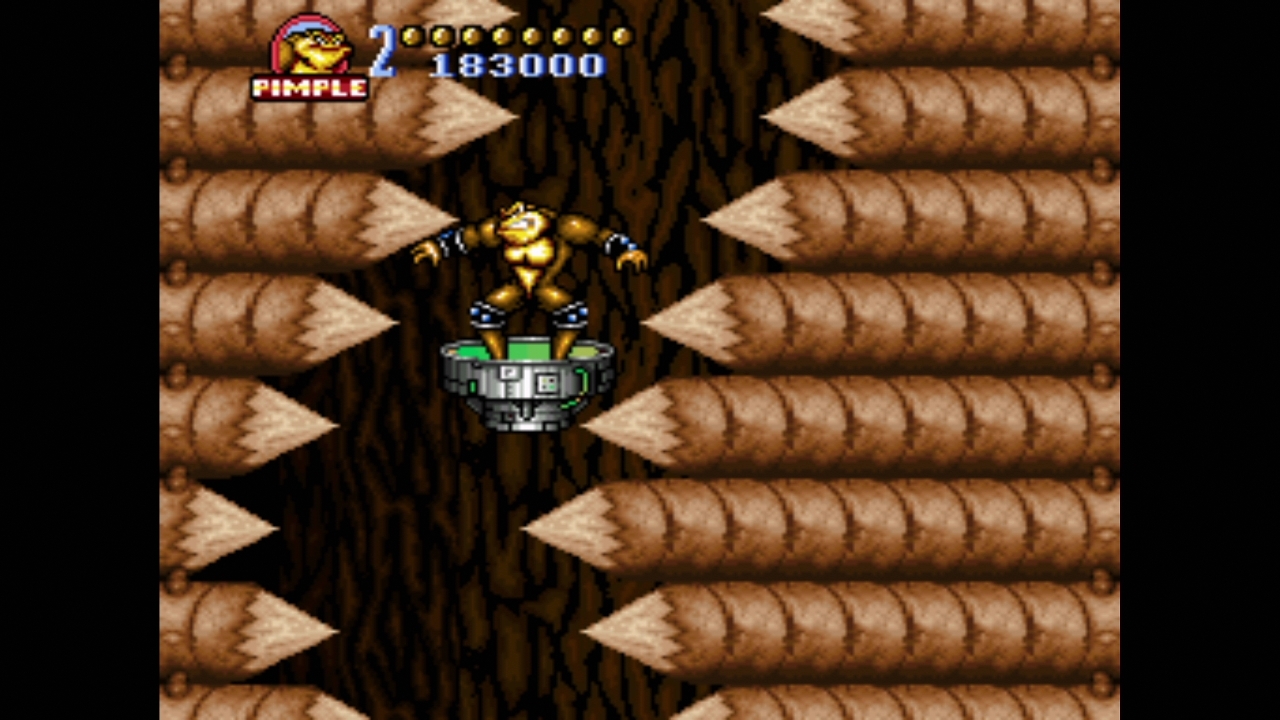 Battletoads in Battlemaniacs hasn’t received any kind of re-release since its SNES debut. There was a Master System version in Brazil thanks to that system’s lifespan being unbelievable there thanks to Tectoy, but it never saw a release in Rare Replay, which is surprising. The NES original was in there with some enhancements and it would make sense to have this in there as DLC of some sort later, but it never happened. Perhaps it will get a re-release with an upcoming Battletoads game on the Xbox One family of systems, but until then, this SNES gem is a must-play for fans of the series. An original cartridge can run you anywhere from $30-$50, so its value is high now given that it’s not regarded as an all-time classic.