The Logitech G brand continues to innovate its gaming peripherals. Whether it be mice, keyboards or headsets, new technologies and designs help propel the PC gaming industry forward. Logitech has recently released a new headset for its premiere 900 series with the Logitech G935 Wireless Headset and the G903 LIGHTSPEED HERO Gaming Mouse featuring Logitech’s industry-leading HERO 16K sensor. While the G910 had previously been the premiere keyboard, Logitech wanted to offer something flashy and really back up its premiere line of hardware. The G915 LIGHTSPEED Wireless Mechanical Keyboard does just that with a low profile design and a few choices to appease gamers.

Logitech is offering both a G915 and a wired G815 LIGHTSYNC, as well. The G815 is more cost effective but is ultimately the same keyboard. Logitech has long washed away the idea of wireless peripherals being a disadvantage and there’s no better proof than the G915. These keyboards are offered with a choice of Logitech’s mechanical keys. The GL Clicky, GL Tactile and GL Linear all have their benefits for gamers, but it’s really based on what the individual prefers.

Gamers gravitating towards the performance of low profile keys was the driving force behind these keyboards. The G915 is ridiculously thin as well as light as the design of the low profile keys allows the RGB to truly shine. There is a steel bar that runs along the interior of the keyboards to keep them sturdy as the exterior is comprised of aluminum magnesium alloy that will provide a fantastic scent when the box is opened. The layout includes five ‘G’ keys on the left hand side along with media keys above the number pad. The ‘G’ keys are customizable through the Logitech G Hub. The keyboards also feature on-board profiles for saving RGB schemes and a wide volume dial so you can reduce time trying to rotate a tiny dial left or right. These keyboards sit completely flat on a surface and can be easily moved. They are also Bluetooth compatible on top of the LIGHTSYNC so with the easy transportation, these can be used for other devices. 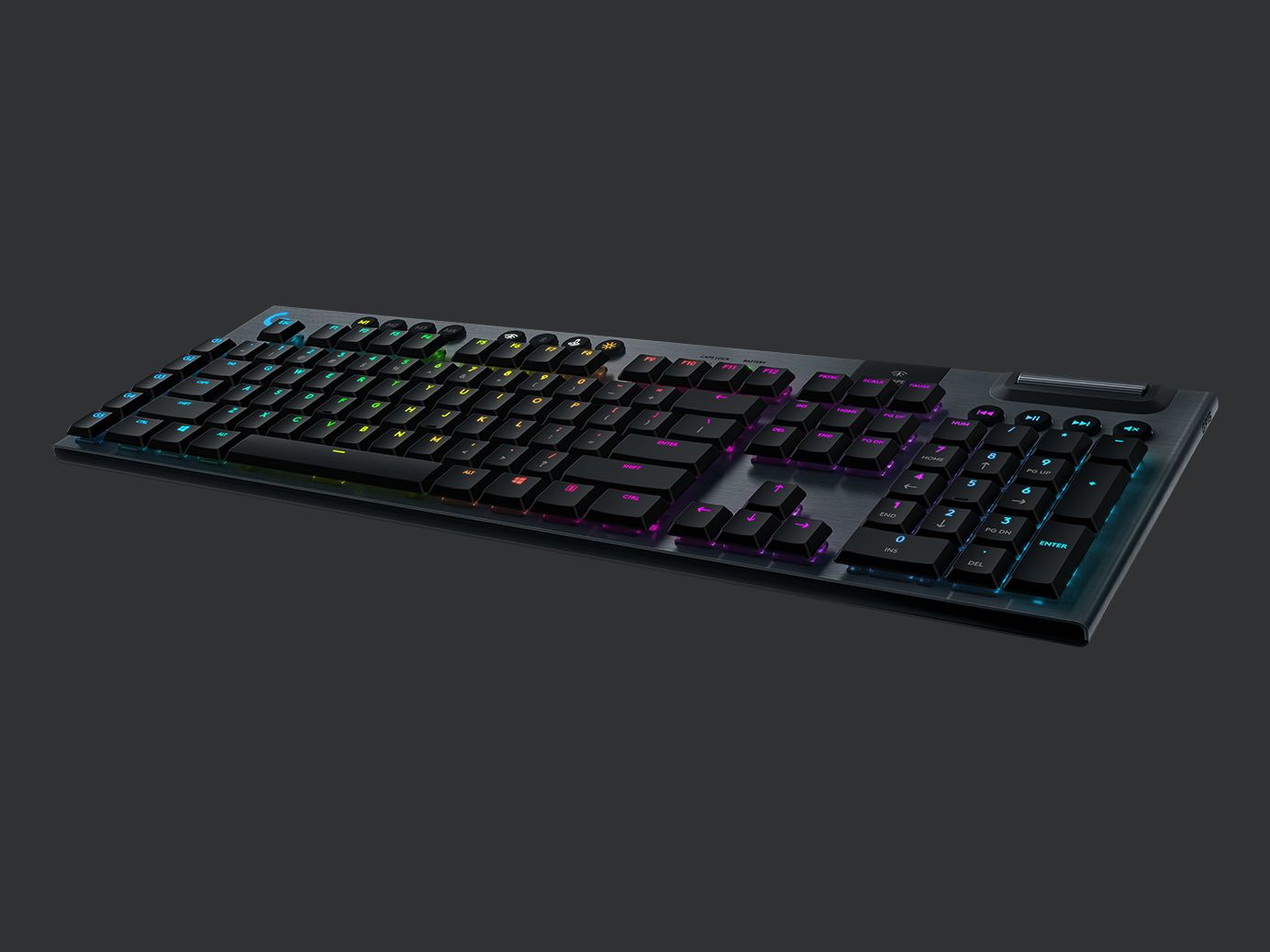 While it will be personal preference for those choosing a GL Mechanical Switch, there’s a clear diversity here. The GL Linear is smooth and ridiculously quick. Testing both The Division 2 and Destiny 2, the actuation was almost too quick for a weighty game like The Division 2. Shooters like Apex: Legends or Destiny 2 will see an advantage in mobility. A game that responds quickly will benefit the most from these low profile keys. The GL Linear is quiet as it sounds like typing on a laptop keyboard.

The GL Tactile provides feedback on actuation without being loud. The rigidness of each press keeps actuation consistent. This goes more on the advanced side for gamers as it doesn’t come off as casual as the GL Linear. For true gamers looking for that feedback, the GL Clicky is a fantastic experience to use. The feedback noise and actuation are the perfect blend of what one would want on a keyboard. All the switches only require a travel of 2.7mm with the actuation point at 1.5mm. The GL Clicky would be first in my book with the GL Linear being second and the GL Tactile being third. 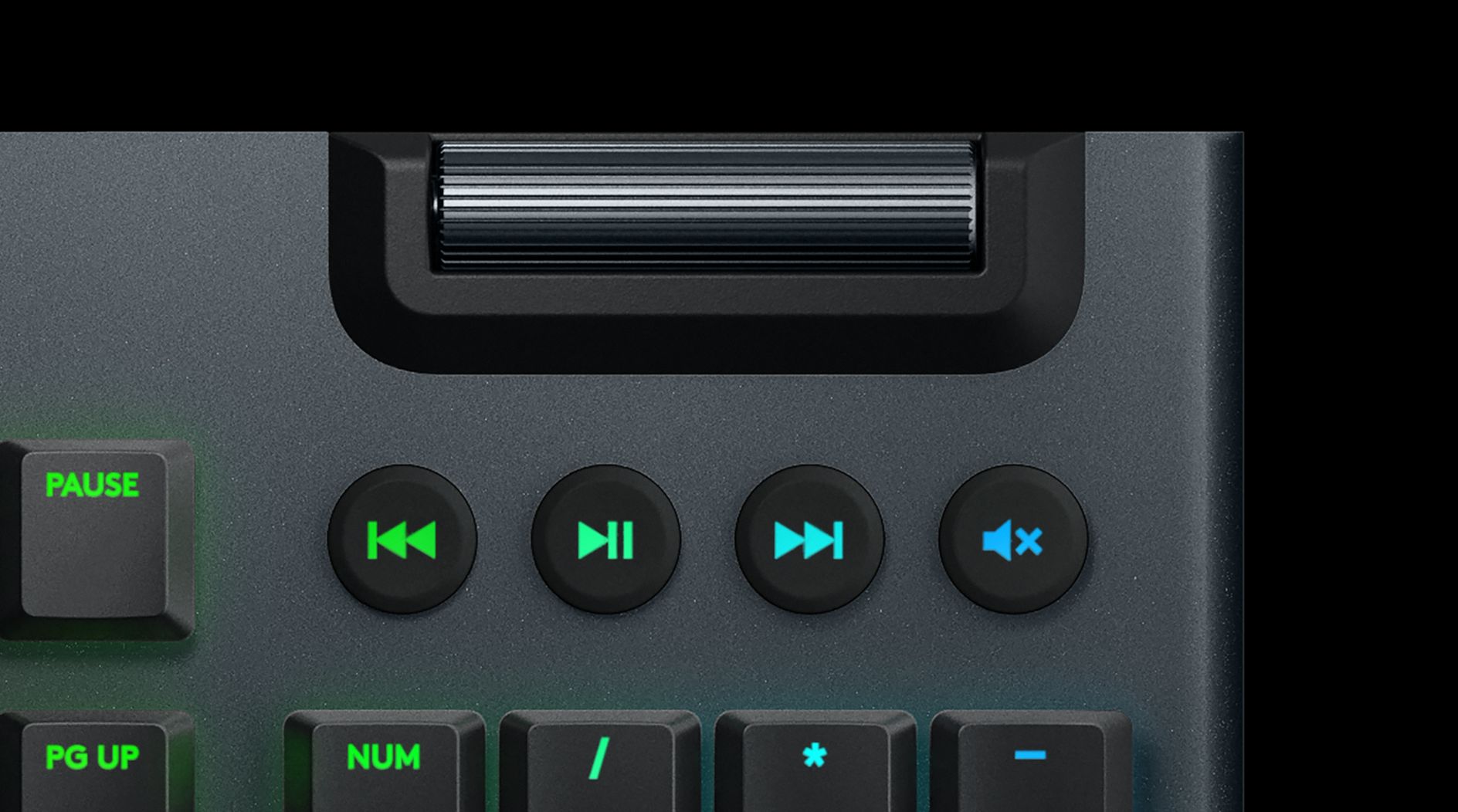 While these are clearly geared towards gaming, there’s a traditional use for a keyboard and it’s actual typing. Whether it be doing school papers, blogs or reviews (hey!), there’s no doubt that typing will be quicker as the actuation is smooth across the board. It’s comforting as finger strokes just roll off each other.

With a recent update to the Logitech G Hub, there are new RGB animations and options that are preset. There’s a freestyle customization, as well. The RGB seems to be the most reactive and brightest that Logitech has had on a keyboard. This most likely comes from the design of the keys and how the light is radiated. The G915 has smart power installed to cut it off when not in use.

With wireless keyboards, the question of battery life also comes into question. Personally, in having these things plugged in and using them daily for a few hours, I still haven’t had to charge one yet. This is also with full RGB on, but this cuts off when not used. According to Logitech, with RGB on, the battery will go 12 days without needing a charge and that’s with 8 hours of daily use. As for the RGB off, the longevity is ridiculous. The battery will last 135 days with 8 hours of daily use.

The Logitech G915 LIGHTSPEED keyboard retails for $249, which is steep for a keyboard, but the technology involved reflects the price. But of course something like this depends on the individual’s price range. The wired G815, which is essentially the same keyboard, retails for $199. In terms of technology and design, it’s hard to argue that the G915 isn’t the best keyboard on the market. The GL keys or low profile keys may not be for everyone, but once this keyboard is touched, it’s hard to look back. Having a keyboard that is so minimal yet potent is something that I didn’t know I needed.