Last week, the AVerMedia Live Gamer 4K was oh-so-briefly available for $200 on Amazon due to a small amount of stock. As a result, many people interested in getting a modern-day 4K capture setup were left a bit disappointed. Fortunately, some alternatives are available now that take the sting out of this. While Amazon is out of stock on the device on-hand, you can get it via a Warehouse Deal in very good condition for $200. The details reveal that it will arrive with a missing manual and a damaged box – but that’s a steep savings and as long as the packaging isn’t too banged up, it shouldn’t hurt the device any. Usually, capture cards are going to be encased in enough protective material to prevent a problem with the functionality of the device and the manual is easily downloadable as a PDF on AVerMedia’s site for the device.

There are some downsides to buying used capture equipment though – such as things like composite-to-HDMI solutions being something that might be included, but not always listed anywhere and thus being missing without anyone intending for bad information to be spread. If you want to buy it new and avoid an issue like that, then Best Buy has the best price on it at $227.99 or via Amazon if you don’t mind waiting until September 9 for it to arrive. This ensures that you get a brand new version and if you’re iffy about installing it yourself, you can just have the Geek Squad do it for you. Having installed internal capture solutions for 14 years now, they aren’t really all that hard to do – you just need to be careful and make sure you have no power going to do the device and properly seat the device in the PCI slot. 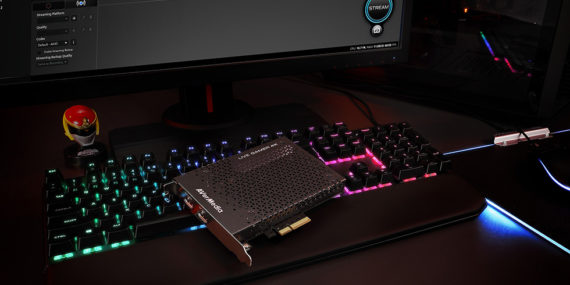 Going with an internal solution is a bit better in terms of video fidelity if you want to use it for a mixture of video capture and screenshots. Using an external device is certainly more portable – but unless you’re traveling to conventions a lot or other kinds of events, PCI video capture is a better and lag-free experience. The gap is narrowing for external devices and input lag, but it’s not quite the same even today with 4K capture being a big deal and companies trying to make things as good as they can for the end-user experience. 4K capture at 60 frames per second is ideal and far beyond what most games are even getting now – so something like the LiveGamer 4K is a perfect solution for the short-term and long-term. Getting it for around $200 is a fantastic deal and makes this a must for anyone looking to get into video capture.

Beyond gaming, it’s also a great way to capture big moments in sporting events. I’ve used it for many years as a way to not only document major happenings on pro wrestling shows, but also MMA. With pro wrestling especially being something that so frequently goes into the absurd, it’s great for video capture because you can record things quickly and then GIF them or just put some meme effects on something when group-watching shows online. This card has RGB lighting and that’s pretty useful if you want to make it easy to see when working on the internals of a computer for either an upgrade or basic cleaning. It’s also something you can probably turn off in software if you don’t like it.