Astro tends to be the go-to premiere peripheral manufacturer for consoles. Its A series of headsets have been a staple for gamers for some time now and has a prominent presence at console eSports events. The company recently released a premiere PlayStation 4 controller that can be modded as this has also been a staple for Astro and its headsets for years. Looking to offer the cream of the crop for console players, Astro has released a new wireless A50 headset that includes a base station. Featuring excellent sound technology and the perk of not needing to plug the headset into the controller are all premiums for the new A50. There isn’t a ton of competition for premiere headsets for consoles, especially the Xbox One as Astro offers a solid feature set with this new A50, but is it worth the price of admission?

The big aspect for the Astro line of headsets comes with the ability to customize. Using mod kits or even the Astro Command Center for customizing communication and audio experience for the player, the A50 Wireless goes deeper than just unpacking a headset and putting it on your head. This headset includes a magnetic base station that allows for not only wireless charging, but a nice set piece for your gaming setup. The Base Station is designed to function as a USB sound card for the device’s audio profiles. The base includes LED indicators on the front along with a USB port on the back for charging either to the console or to the PC. It even features a direct audio optical out and includes the cable for it, which presents an even better audio experience. What you won’t get are any wires from the headset. This is truly a wireless gaming headset in its purest form, so using the A50 for other things such as Bluetooth connectivity or a wired connection is thrown out the window.

The design of the A50 continues the look for Astro products. The extension bars are two metallic extensions with grid lines for height and the exterior composite is made up of a matte plastic that is flexible and designed to take a beating. The headset does sit loosely on the head, but remains snug and intact. The previous A50 Wireless and Base Station setups for Xbox One and PlayStation 4 were more color coordinated for each system. This combo is more low profile as the Xbox One unit is matte black with gold accents as the PlayStation 4 version has grey accents rather than gold. The A50 includes a microphone that swivels up and down and will automatically mute when up. The A50 itself will automatically shut off when attached to the Base Station, helping to amount to fifteen hours of playtime for the headset with its lithium ion battery. 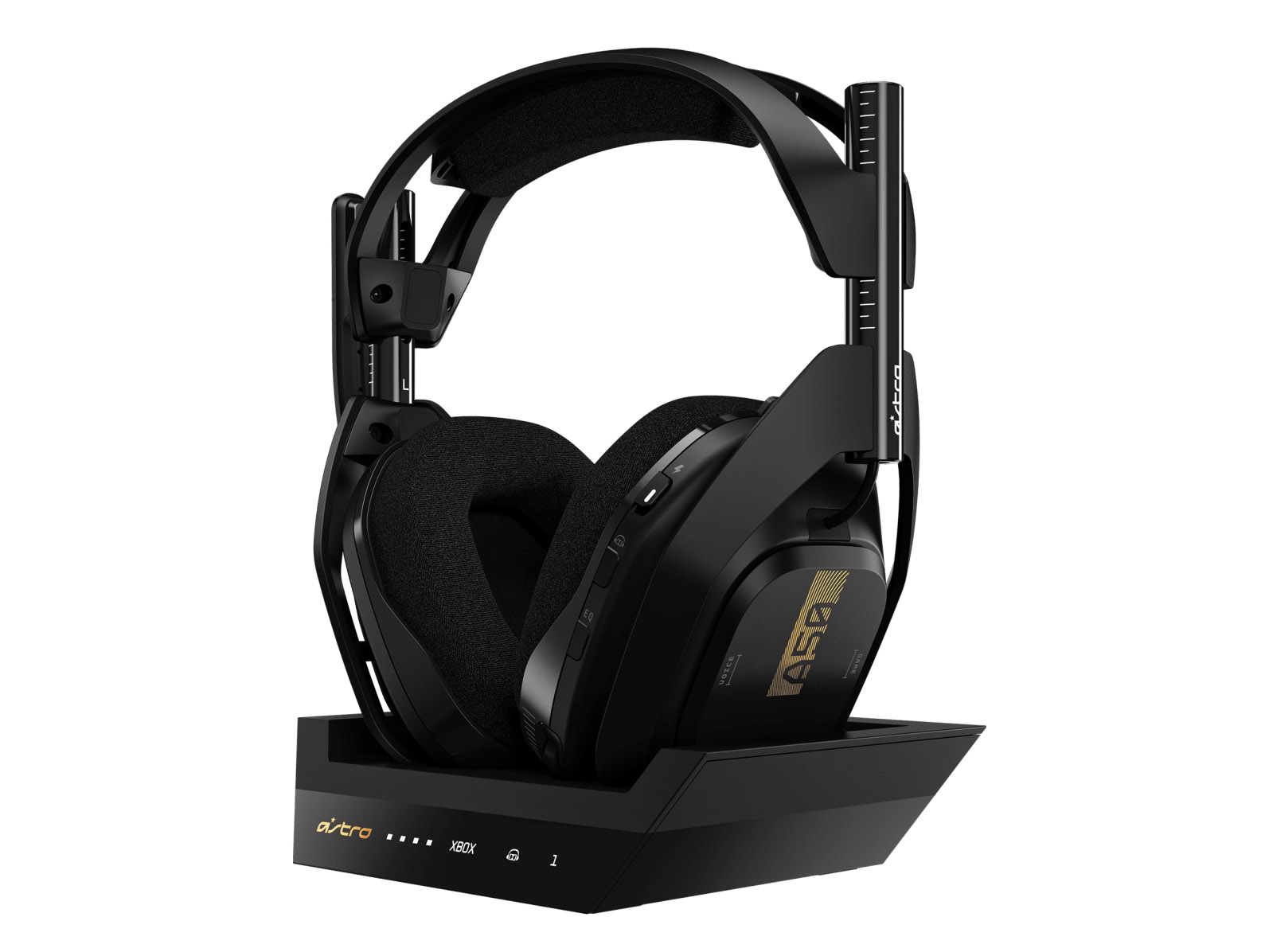 The headset itself includes a few bits of built-in functionality. Tapping the outside of the ear cup will adjust volume preference for communication versus game audio. As for adjusting the actual volume, there’s a dial for that. The A50 also includes built-in EQ profiles that can be selected with the push of a button and also the ability to turn on or off Dolby Atmos. It’s worth noting that the A50 includes a two year subscription for Dolby Atmos services which are fully supported by the Xbox One. As a whole, the A50 comes in somewhat weighty, but sits comfortably for long play sessions. The cloth ear cups and headband add to the comfort, although going with cloth over leatherette for such a premiere headset is a strange choice, but it does work out. Sweat doesn’t seem to be an issue with the ear cups as they cover the entire ear.

As for the audio, the sound quality defines the A50. This uses the Astro Audio V2 drivers to help deliver a crisp and detailed audio experience. Ear fatigue was never an issue with this A50 as the audio helped with location and was never a burden for comfort. While EQs can change exactly what the player is looking for, the actual audio response and sound levels are premiere. Add to this the ability to use Dolby Atmos and one can better understand the price tag. The most enjoyable aspect of the A50 is the voice communications. This headset features the clearest voice comms I have ever experienced in a headset. A huge personal preference is the ability to hear feedback from your own mic. A lot of headsets lack this and this is an important aspect, personally. The ease of use of the entire A50 Wireless is a big bonus. 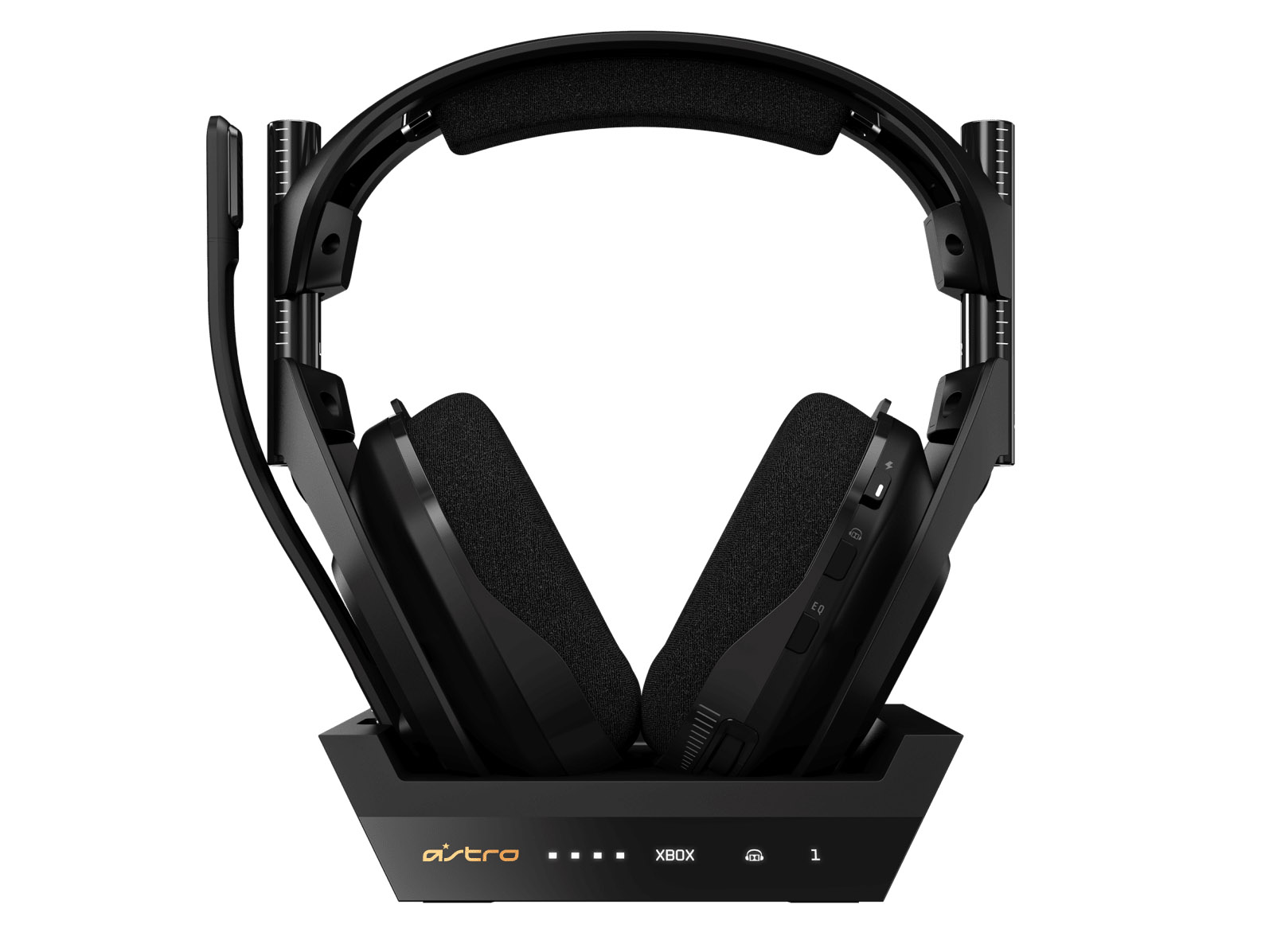 The elephant in the room is the retail price of this headset as there are cheaper headsets with better accommodations in comparison, albeit not streamlined for console use. The Astro A50 with Base Station retails for $299, which is the same price as a new console. Granted, the technology and customization options are excellent, but if you compare this to what Logitech has implemented recently with its Pro or G935, those headsets are preferable. Yes, the Pro is wired but features unbeatable comfort and top-of-the-line audio technology. The G935, while not for consoles, is wireless and an excellent headset for half the price. The Razer Nari is another wireless headset that packs a punch for a cheaper price. The A50 is compatible with PC and Xbox One, but this is where the lack of competition comes in on consoles. The price point just isn’t reasonable for this headset and even $200 is pushing it in my opinion. The entire experience of the A50 combo is streamlined, but ultimately $300 is too much. Even the previous model has been marked down 20% on Astro’s site. The C40 controller included all the mods so the least Astro could do would be to include the mods for this headset at that price. The A50 is a wonderful headset to use and would provide a competitive advantage on consoles, but charging as much as the console itself is a problem.