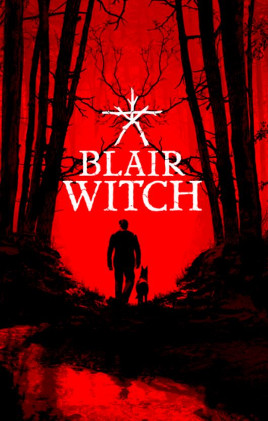 Back in the Paleozoic era (editor’s note: 1999 was not the Paleozic era) a movie was released that garnered quite a bit of media attention. Marketed as recovered footage from a 1994 expedition into the woods to the find the mythic Blair Witch, The Blair Witch Project was a documentary style horror that was frequently used for pop culture references for a short time period. It had a couple sequels, neither of which got as much attention as the original. When it was announced a few months ago it was a surprise that a video game based on this would get announced two decades after the original film, and not only that it exists but it looked good.

Blair Witch takes place a couple years after the events of the original film in 1996. The protagonist is a former cop named Ellis. He and his companion, a dog named Bullet, join in the search of a missing nine-year-old boy in Burkittsville, Maryland. The child, troublesome brat that he is, decides to get lost in a way that requires people who go into the Black Hills Forest that is supposedly cursed by the titular witch in question. Instead of doing the practical thing and just accepting the child is gone forever, likely being boiled in a cauldron, the police and other concerned citizens of Burkittsville venture into the woods to find this child. What began as a simple missing person investigation has turned into a journey of unspeakable horror.

Staying true to the tone of the film, Blair Witch is a psychological horror experience. With Bullet as Ellis’s only companion, the woods can be a lonely place. One of the strong points of Blair Witch is how well it creates an atmosphere of isolation. Ellis has PTSD to contend with, and going into cursed woods alone can stir up some issues. The PTSD episodes are well done and add intensity to the harrowing time in the woods. The beauty of this is there’s some element of mystery to whether all the unusual happenings in the forest are the result of the supernatural activity or Ellis’ mental unraveling. Perhaps it is a synergistic effect of the two intermingling, but regardless of the exact details the environment quickly turns into a waking nightmare. 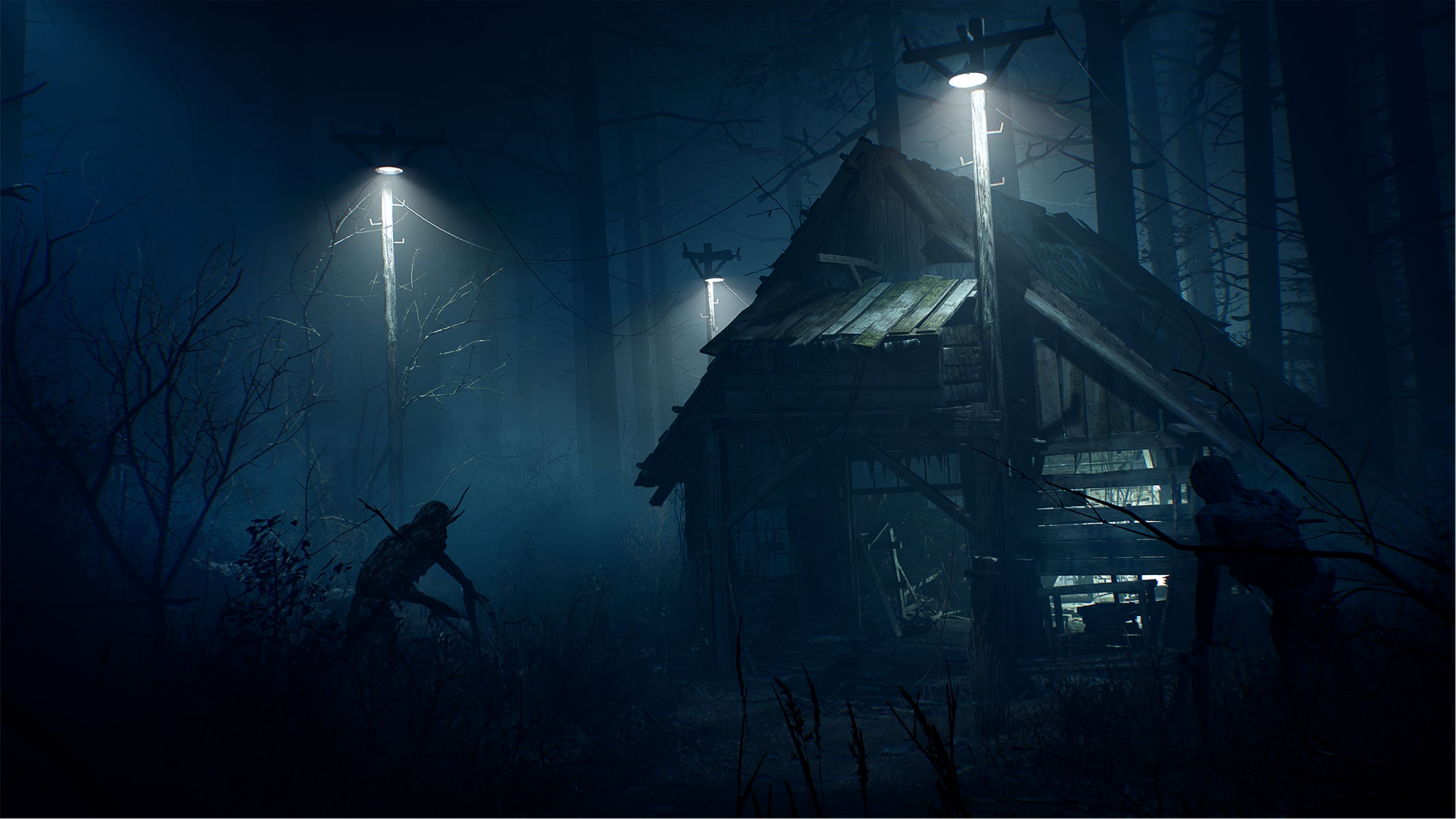 The Black Hills Forest is a cartographer’s nightmare. The layout of the woods seems to shuffle randomly, making exploration disorienting and nearly impossible to map. Trying to navigate through the woodlands caused flashbacks to Hyrule’s lost woods, where traveling in a straight line could have Ellis looping back to the area he just left. This is an aspect of Blair Witch where there are some mixed feelings. On hand it helps with the general immersion in being lost in in a haunted forest, being tormented by your own mental health issues and supernatural forces. On the other, it can lead to frustrating gameplay and seems to do little more than artificially extend the game. The camcorder mechanic is an interesting aspect of Blair Witch. Clearly an homage to the original movie, this device has some implications for helping Ellis navigate through the forest. The camcorder can be used to play found footage that can give insight to what the player needs to do next. The camcorder does have a night vision function to help Ellis see his surroundings more clearly when the flashlight is not a viable option. More interestingly, and also getting into is this mental instability or supernatural forces, rewinding tapes can actually manipulate the environment.

Bullet is one of the best things about Blair Witch. One of the most enjoyable things about having the companion dog is being able to pet him and give him snacks. In a game that is based on fear and anxiety, Bullet cannot be killed in the game so that is one major point of anxiety that the player doesn’t need to be concerned with. Besides the simple joy of having a virtual pet, Bullet can assist in Ellis in looking for items, pointing him in the right direction or show him where he should shine his flashlight in combat sequences. 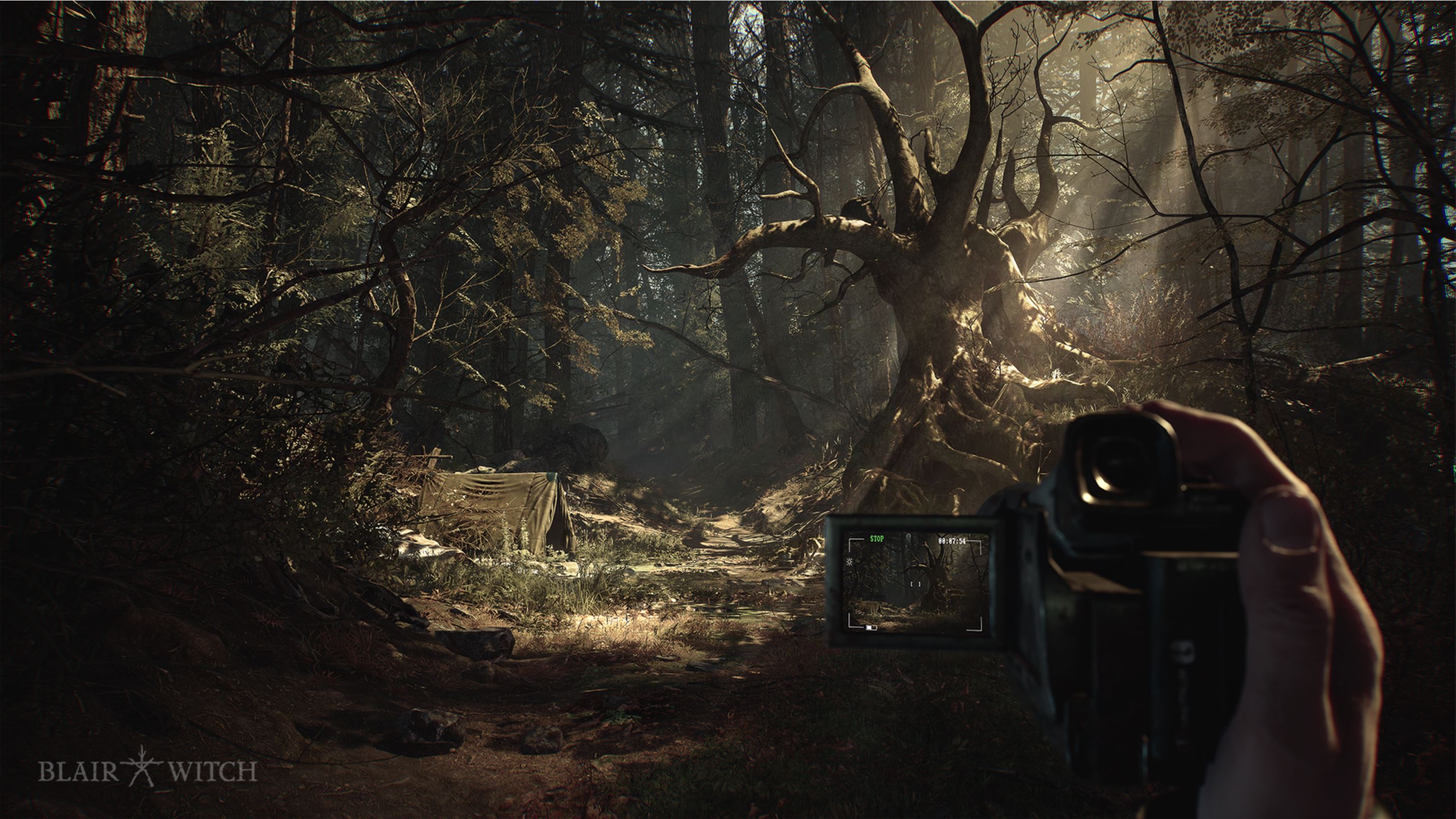 Combat is not one of the stronger points of Blair Witch. The titular witch is enigmatic but it’s easy to figure out where her minions get their appearance. Early on in the game they seem to behave like the gremlins from a 1980s movie and can easily be dispatched of with the flashlight, which Bullet can assist the player in where to shine that flashlight. Later on they build up an immunity to the flashlight, forcing Ellis to take a much more challenging stealth approach. The stealth sequences can be demanding in how precise they require the player to be, especially in the later portions of the game.

The overall presentation in Blair Witch is appropriate for psychological horror but doesn’t always hit the mark. There are a few jump scares in the game that almost detract from the unsettling atmosphere. There are some puzzles but these are generally quick affairs to solve and a few hidden items to uncover. The biggest problem is the pacing. There are moments that are interesting in exploring Ellis’ backstory and dealing with the lore of the Blair Witch, but there’s a lot of downtime in between these moments which can make exploring Black Hills Forest as exciting as wandering down a path in a local forest preserve.

The sound design is excellent, and playing Blair Witch with a high-end headset in recommended to pick up all the nuances of the ambient soundscape. The chilling audio paired with the grim forest is a perfect recreation of the feel the movie was trying to create. While the artistic presentation excels there are still some bugs on the technical level. Various glitches happened more often than is desirable during the review; one of the stranger ones was the screen was flashing green. Initially I thought this was part of the curse of the Blair Witch, but the screenshots revealed that this was a mistake. 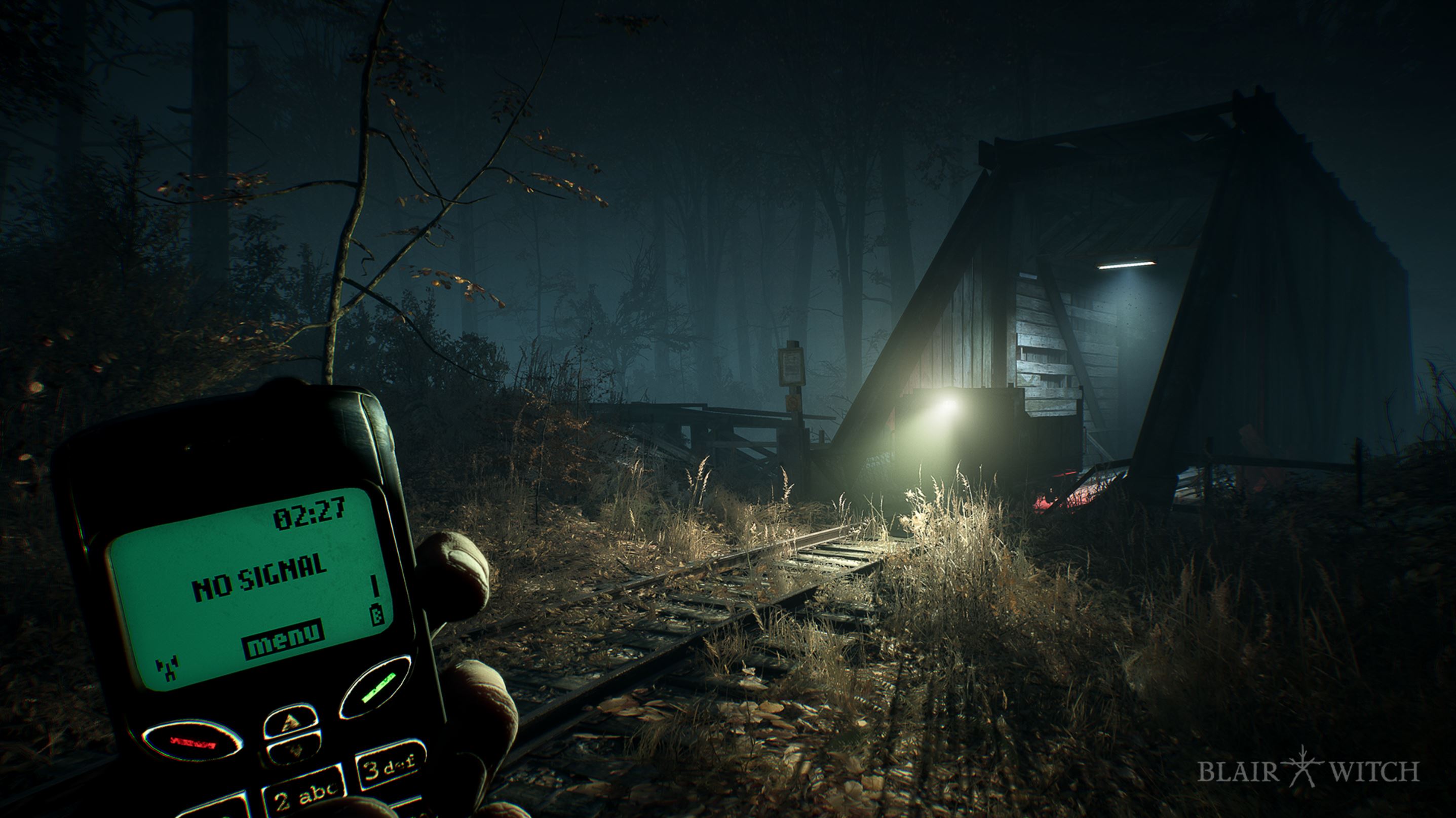 Blair Witch makes a valiant effort to revive the franchise, and while it won’t generate the hype of the 1999 film, it’s a worthwhile horror title despite some flaws discussed above. Its biggest problem is that the execution of a lot of its ideas fall short of their potential. Bullet is a great addition to the experience, but poor pacing and not the greatest game mechanics hold this one back from being a must-play title. For hardcore horror fans or people who are really into the Blair Witch franchise, this title is worth checking out.