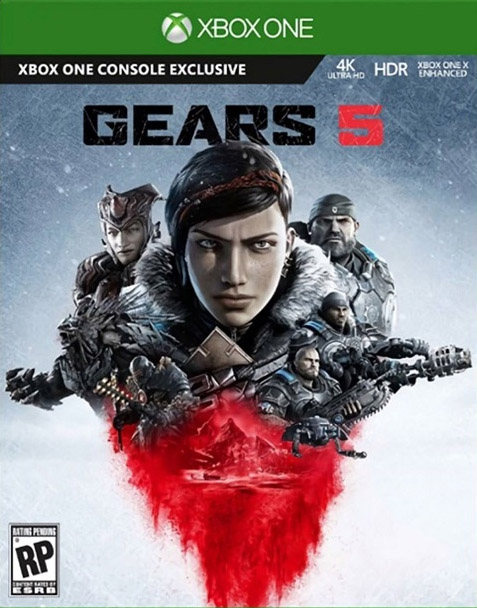 While the Halo franchise solidified the original Xbox as a true competitor, one could argue that it was Gears of War that helped define the Xbox 360. It was a bro shooter that sold millions worldwide and claimed numerous Game of the Year nominations over its run on the last generation console. It was clear that Microsoft had another winner on their hands, and thus they acquired the rights to the series and continued forth with their own vision. With The Coalition at the helm, we received a solid, but less profound adventure as we went on a journey with Marcus Fenix’s son, JD Fenix. It felt like a Gears of War for a new generation of players, while maintaining most of what we’ve come to love from the franchise. Considering the last installment left off on quite a cliffhanger, it was only natural that the developers were hard at work creating a sequel. Considering the current video game landscape has grown immensely with even more competition on the market and expectations through the roof, has The Coalition done enough to naturally evolve Gears 5 into the monumental shooter it grew from or is this just the same old formula we’ve come to see?

Story has never been a large bullet point for the franchise, but it’s a clear focus for Gears 5. Sure, there were tidbits of the universe spread across collectibles and quick pieces of dialogue, but we learn more about Sera’s past than ever before. While we still have a difficult time putting together a cohesive map of the world, we do learn about warring countries and ideologies, some of which were clearly influenced by America’s history. I’m not going to sit here and tell you it’s a meaningful and perfectly-executed plot, but it’s a clear improvement over its predecessors that sheds more light on the elements fans had burning questions about, along with plot holes that needed filling. This is almost entirely Kait Diaz’s story, with the revelation at the end of Gears of War 4 playing a significant role in her mental status. She is having nightmares and hallucinations to the point she decides to go on a journey to learn what’s happening to her. It’s a decently paced ten-hour adventure that brings us across the world, from sandy dunes to the frigid tundra. 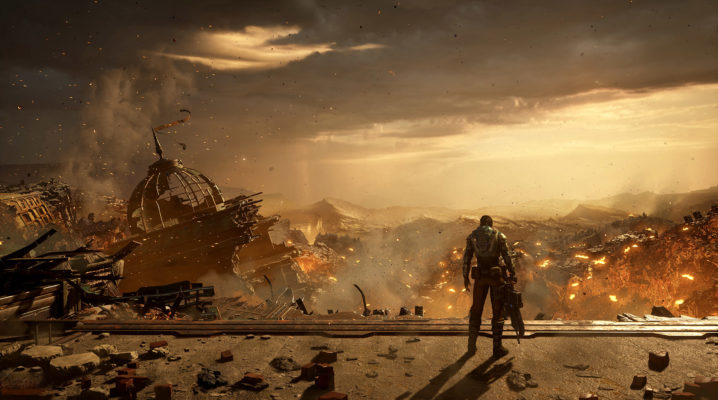 Unfortunately, one aspect of the story that feels oddly tacked on is a choice you make near the end of the campaign. Just as ever before, for the vast majority of Gears 5, you’re going through a directed path with small deviations that primarily open up more lore about the world thanks to the surprisingly decent dialogue exchanges between characters (at least after the first Act). That changes abruptly in the final chapter where you’re given a choice that alters around three short cutscenes, taking up maybe a minute worth of time. It feels thrown in but affects the story moving forward in a way you have to question what The Coalition will do and how they will handle it going into Gears 6, because this is very much the Halo 2 of the Gears. Because of this, it put a bad taste in our mouth despite the rest of the journey being a fantastic and memorable experience. It felt sudden and unnecessary; it’s not like you’re making choices throughout the entire campaign, so why throw in this unforeseen moment that would have consequences that divide future games in an unnecessary manner?

Inspired by games such as Resident Evil 4 and Kill Switch, the Gears of War franchise perfected the third-person cover-based shooter. This continues forth with Gears 5 as The Coalition has created a mechanically iterative version of the beloved combat system. While you can still rev up your chainsaw Lancer, there’s an even greater arsenal at your disposal and that’s only exemplified with the latest version of the Lancer which now shoots rockets. In fact, I don’t think I ever was on the butt end of a chainsaw in the entirety of the campaign, but this is probably because most of the firefights were done from afar, unlike the multiplayer component. What has changed significantly is the progression. While it’s still very much a linear corridor shooter, this is only primarily true for the beginning and end of the game. The core section is filled with vast open areas to explore with even side quests to partake in. These give a whole new breath of life to the traditional Gears formula that’s needed. Sadly, the open area format does feel like a half measure. There isn’t an RPG element to Kait or your character, but instead Jack, your little helper robot. You can find components around the world and complete side quests in order to gain abilities to better enhance Jack’s capabilities. It’s something we hope to see expanded to the characters themselves, as we found ourselves forgetting our helper robot was even in the fight most of the time. 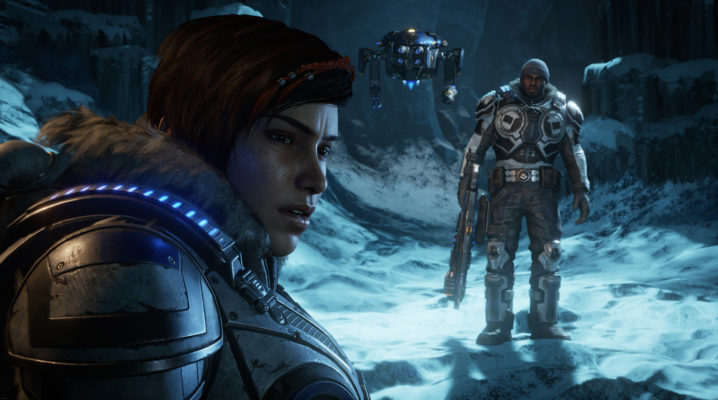 While the single player portion has always been a large component to Gears of War — the first game originally was going to ship without any competitive modes, after all — it’s the multiplayer that really sells the full experience. For Gears 5, we are treated to three distinct options: traditional Versus, Horde and the new Escape. Versus is absolutely stacked, with twelve starting maps that can played within nine different modes. This includes the already-established Arms Race, Dodgeball, Escalation, Execution, Guardian, King of the Hill, Team Deathmatch and Warzone, but we also receive a brand new Arcade Deathmatch. This a variant on the standard Team Deathmatch where you will be able to buy randomized weapons based in-match currency you rack up with kills. The more you contribute to your team’s victory, the more weapons you’re able to purchase. Because there’s an RNG aspect to it, it does somewhat rely on luck. Sometimes you’ll get a decent assault rifle, other times you’ll get a tri-shot chain gun. You have to be careful with this, though, as if you die with that weapon, anyone, including the other team, can pick it up, so it can be a double-edged sword. Regardless, Versus offers an incredible amount of value along, not to mention the others.

Escape is the brand new cooperative mode that contains a strong survival element. There are four templates to choose from, although most of them feel similar to the other. These are roughly fifteen to thirty minutes in length (depending on difficulty) where you and two others detonate a bomb in a Swarm nest and need to make it to extraction before the gas kills you (that or the Swarm). There’s a level of tension that you don’t normally get in Gears as it’s a race against the clock. It also ties into leveling characters who have unique special abilities that can aid your party; some will be able to put up shields while others can restock ammunition. The latter is important because you only start off with a pistol and any weapons you find in the world come with little ammunition. Because of this, you’ll be robbing the dead of their projectile treasure quite a bit. There’s also a means to create your own maps, which should offer a little more variation if you decide to keep playing this mode. It’s an entertaining mode while it lasts, but ultimately a distraction from the real attractions. 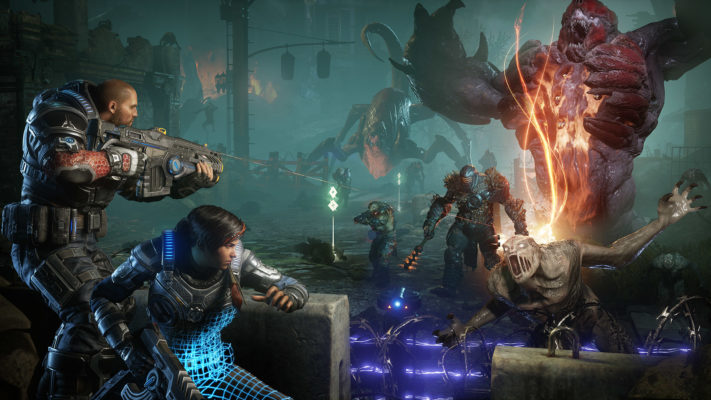 Lastly, we have Horde. Really, anyone who has played Gears before, especially the last one, will know exactly what you’re in for. This is a cooperative mode where you’re defending a Fabricator from wave after wave of increasingly difficult enemies, with main attractions coming every five stages. You never know what they will throw at you, especially when it comes to bosses. Want two giant enemies with clubs that can one-hit you? Well best of luck. Luckily the fabricator can create weapons and barriers for you to slow down these creatures. Similar to Escape, your character’s level and abilities are carried over to aid you in your endeavor. My only real complaint would be that even on the second (of many) difficulties, it gets shockingly difficult after twenty rounds, even with a full crew of five. You’re technically able to modify the difficulty to your liking, but just be prepared to strategize quite a bit. Regardless, Horde is just as good as ever. If you’re someone who favors cooperative play over competitive, this will no doubt take up more time than you’d realize.

Now let’s talk about the presentation. The musical score in Gears of War has always been fantastic, to a point where I feel it’s a little underappreciated, and Gears 5 does not disappoint. Fast-paced action is treated to a heart-pounding rhythm while the sadder moment containing somber tones. There’s a good amount of variety and it’s aided by the sound effects, even though they are more or less what we’ve come to hear from past games. As for the visuals, Gears 5 is the best in the series. The first and final acts are handcrafted set pieces that will leave a lasting impression, while the core open areas are stunning. There are segments that look better in motion than they do up close, but you’ll be too busy admiring everything passing you by as you ride your Skiff to see the irregularities. There’s also an incredible amount of variety as we travel the world to witness structures we didn’t think we’d see in the universe. Suffice to say, The Coalition has put a lot of work in the presentation and it goes a long way. 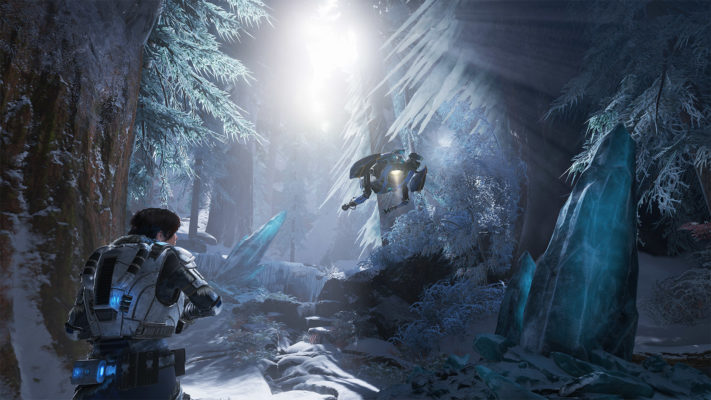 The Coalition is clearly making substantial strides to evolve Gears into a bigger and better shooter, but the fifth installment is only half a step in the right direction. The open areas that make up the core of the experience are a welcome addition, but they are primarily made for upgrading Jack, who is a small part of combat (although it does help expand the universe ever so slightly). Escape, while entertaining, likely won’t make a lasting impression on most players as I found myself moving back to vastly superior Versus or Horde. Lastly, the choice you’re able to make at the end of the campaign feels abrupt and unnecessary for a series that has, for nearly sixty hours, been telling a very specific story. I may sound negative, but the fact is Gears 5 is the best cooperative and competitive third-person shooter, at least mechanically speaking. Combat remains exquisitely satisfying, the sound and visual departments have upped their game, the multiplayer is once more highly addicting and the lore of the world has never been so compelling. Gears 5 doesn’t quite reinvent the genre, but instead acts as a stepping stone for a better future.