LA-MULANA was originally released on PC and was made to emulate MSX titles of the past and was well known for its puzzles and difficulty. Later down the line it got a proper remake and a sequel funded by Kickstarter. Now LA-MULANA is on its way to all platforms in a collection featuring both the games for players to experience again or for the first time ever. We had a chance to sit down with Takumi Naramura, who did most of the work on the titles, and learn a little bit more about these games once more.

[Hardcore Gamer] Would you mind giving our readers a brief introduction of yourself and your work on LA-MULANA?

[Takumi Naramura] I worked on the art, directed LA-MULANA and did basically everything aside from the programming.

Do you feel like LA-MULANA has been successful in giving players a difficult yet satisfying gaming experience?

The most interesting thing about the difficulty is the region players are from. In Japan, players found it to be too difficult most of the time and wanted it to be easier. But in North America players thought it was too easy and were wanting it to be harder. It’s hard to please everyone, but I think there’s a fairly good balance.

What do you think is the most important element to playing LA-MULANA?

I’ve watched a lot of people play LA-MULANA and many end quitting because it seems too difficult. They often don’t pay enough attention to the hints or think they’re just cryptic nonsense. Players should really be taking notes, as they’ll likely get lost otherwise and won’t understand puzzles they run into. It’s very much an old-styled game where clues are important, so it’s important to be aware of all the messages left behind.

What kind of videos do you watch for LA-MULANA? Speed running or playthroughs?

I watch quite a few playthroughs to see how players handle the difficulty. I especially like watching the ones when whoever is playing has a good scream or yell. 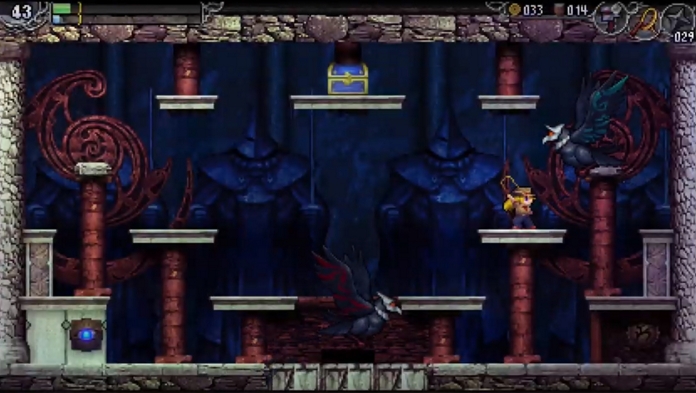 The visuals of the original release are incredibly adorable. Have you considered releasing the original on console with a similar demade version of LA-MULANA 2?

When the original game came out I considered myself an amateur at making games. But as time has gone on I’ve improved and so has my work. I think the best version of LA-MULANA is the one we have now since I’m no longer an amateur, and I’m much happier with how it’s become so there aren’t any plans to bring back the old version. As technology improves, I want to improve with it so it’s important to always try and make things better.

What’s your favorite weapon from either game?

There’s no one weapon I consider my absolute favorite, but I really like the whip since it’s the most iconic one in the game as it’s always with you.

Is there anything you’d like to tell fans looking forward to the LA-MULANA Collection?

I hope that old fans and new players enjoy the LA-MULANA collection. In the future I’d like to get the opportunity to re-release even more of my games so people can play them so please enjoy them when I do as well.

Thanks very much to NIS America and Takumi Naramura for sitting down with us. Be sure to check out the LA-MULANA 1 & 2 Collection when it launches early next year.