The N64 was a haven for all kinds of 3D platforming action. From the system’s launch with Super Mario 64 to the collectathon nature of Banjo-Kazooie and Banjo-Tooie, every major base was covered. Rare itself found a new golden age with the system and found itself at a crossroads towards the end of the platform’s life. They created a lot of light-hearted fare and infused it with comedy, but hadn’t really done anything bold on the platform. Enter Conker’s Bad Fur Day, a revamped version of what was originally going to be a kid-friendly 3D romp. This mature take on platforming featured a ton of bloodshed and swearing that wasn’t normally seen on Nintendo consoles and the infusion of Rare’s signature British humor helped it stand out even more.

It was a cutting edge game on the N64, but its visuals didn’t age well into even the next generation. This led to a desire for a remake of the game on the Xbox when Microsoft bought Rare in 2002 and that finally got a release in 2005. The original release was set to be Live and Uncut before the name change and that led to quite a bit of controversy. Despite the Xbox being the “mature” system of its day alongside the PS2, Microsoft released a censored version of the N64 classic. This kept the violence intact, but reduced the swearing – which also hurt some of the game’s musical numbers. It was a weird move at the time and one that led to the Xbox version not receiving nearly as much critical acclaim. 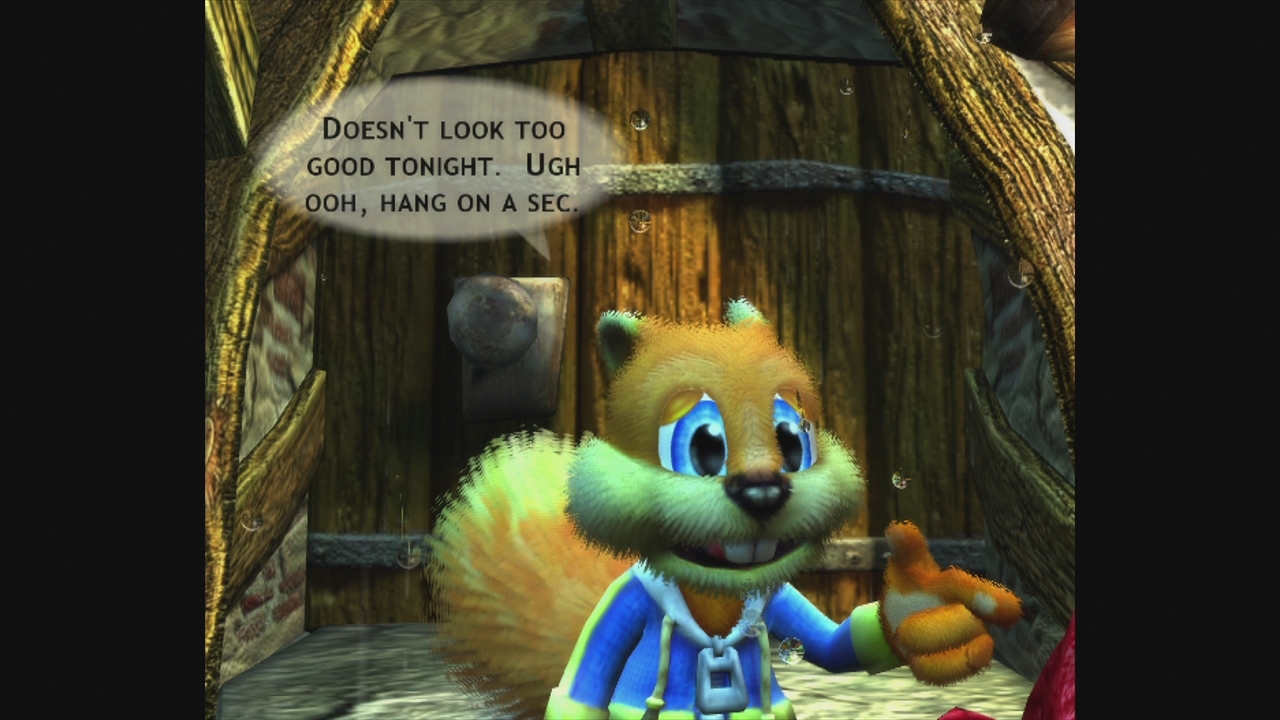 With so much time passing between then and now, however, it’s interesting to take a look back and see if those changes cripple the experience or merely hobble it. In going through the game again, it’s clear that a lot of care was put into the remake — and with this modern era of remasters and remakes becoming a bit of a blur, having something that completely rebuilds things from the ground up still stands out in 2019. The voice work was redone a bit as well and sounds cleaner with higher-quality samples being used alongside some button prompt changes. Seeing so much effort put into every aspect is refreshing and it shows a level of care that is rarely seen with remakes.

The tale being told winds up standing out a bit more now because instead of hardware trying to struggle to keep up with what’s going on, the hardware can run everything smoothly and with stunning graphics and smooth framerates. The N64 version was incredible given its hardware, but blurry textures hurt it even if it did have the most detailed facial expressions ever seen on that platform. The original Xbox was known for delivering best-in-class console graphics in its day, but Rare really worked some magic delivering something that still looks good in 2019. 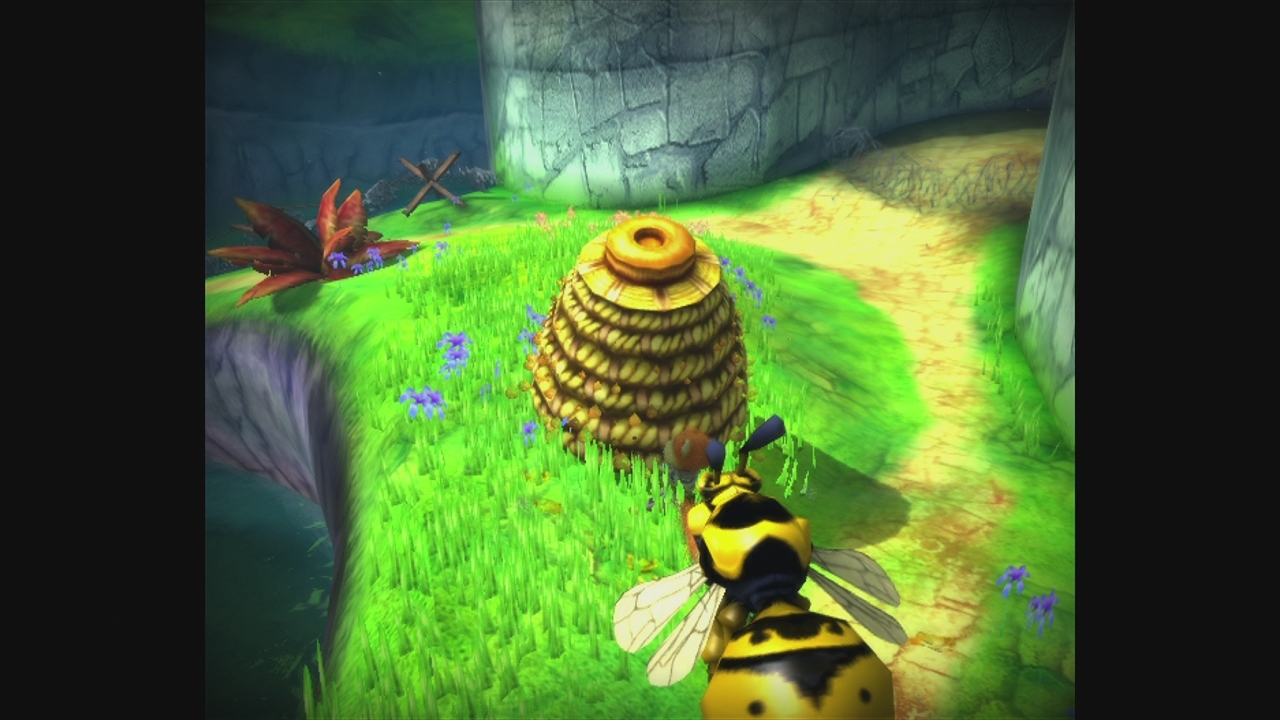 The fur on Conker and all of the other characters with it remains impressive now. It has an intricate design and while it doesn’t move like fur would move naturally, it does at least look like a patch of fur should and it really hasn’t been topped now. The already-good facial expressions are even better in Reloaded, with more detail that helps drive the comedy home better. Environments still look good, with things appearing a tad muddy at times, while things like wood grain still look good with a healthy amount of color variety to keep things interesting. Rare getting character animation right the first time means that they didn’t have to do much for the remake. Conker walking around drunk looks great in both versions, while attacks have been given a bit of a boost and look smoother without being changed so radically that it messes up the timing of things.

Reloaded changed the controls a bit, but did so for the better. While the N64 pad worked fine, it wasn’t ideal for 3D platforming due to how cramped things could feel. The Xbox family of controllers always felt like a more natural fit for it. The original Xbox’s pad worked well, while the 360 pad was an improvement, and the Xbox One controller feels like the best way to possibly play this game with the controls being fully optimized for an Xbox layout. Everything is responsive and it’s a joy to control.

One of the best parts about Bad Fur Day was its comedy and while it does get a huge upgrade visually from things like goofy facial expressions being more detailed, it is hurt by the censorship imposed on the Xbox version. The N64 version had all but the worst of words uncensored — allowing things like the Great Mighty Poo’s song to be heard as originally intended. The Xbox version changes things with audio and subtitle censorship that changes the flow of songs or even just jokes in general. As a result, the game just isn’t as funny in remake form as it was in the original. Fortunately, with Rare Replay and Reloaded being backwards compatible, Xbox One owners can play both versions, but it’s a shame that any censorship changes were made. It’s especially puzzling when the you consider that the Xbox was seen as the most adult-oriented system of its day. 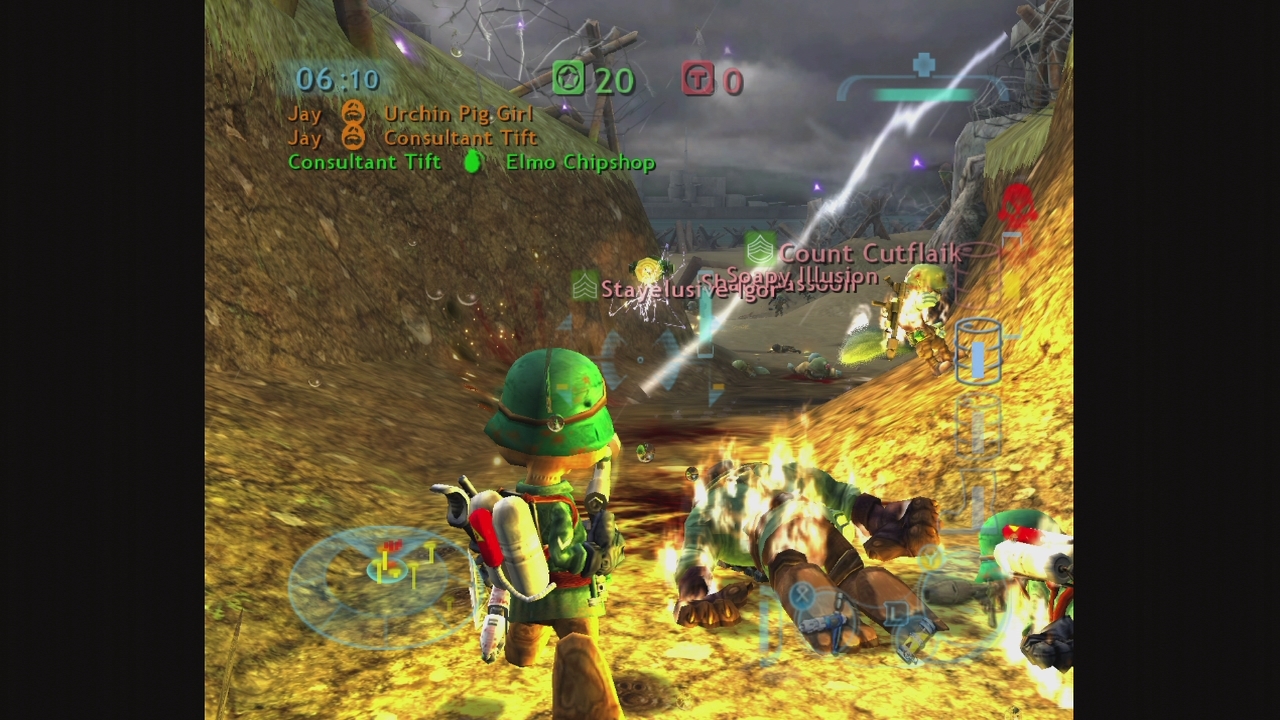 The Live portion of the name focused on Xbox Live functionality, and while that part of the game should in theory be completely worthless now with the original version of Xbox Live being gone for well over a decade, it isn’t. You can still play the multiplayer modes with bots and while it isn’t quite the same, it does add some value that the overwhelming majority of original Xbox Live games no longer have. The multiplayer deathmatch-style modes are fun and let you control things like tanks and turrets you can’t use during the main game — so it still offers up a different kind of experience and it’s fun to play.

Conker: Live and Reloaded may not be perfect, but it’s still an absolute blast to play. The game was originally limited to a physical Xbox release that could be played on the Xbox 360, but as of mid-2018, you can also get it digitally on the Xbox storefront. This is probably the most convenient way to enjoy the game, and if you want the original, then it’s a part of Rare Replay. You can get that either with Game Pass or on its own with a ton of games — and it’s one of the best retro collections ever made no matter what.