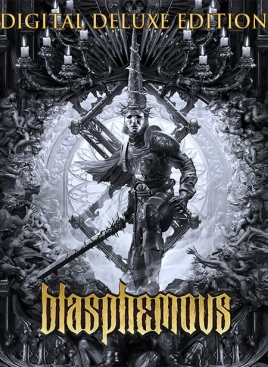 Peanut butter and chocolate. The universal symbol of two great tastes being mixed together in an attempt to create something even more delicious. And when it comes to indie games, it also acts as a tried and true formula at times, as genre hybrids do tend to draw a lot of attention. So given the popularity of hard-as-nails souls-like games and classic metroidvania adventures, a mix of the two (which I shall call “soulstroidvania” games) feels like a recipe for success. And true enough, titles like Salt and Sanctuary and Dark Devotion have tried it out, with varying degrees of success. But now we have one the most anticipated soulstroidvania games in quite a while, The Game Kitchen’s Blasphemous. So does it end up being another terrific — if extremely bleak — treat?

Blasphemous takes place in the land of Cvstodia, which has been hit hard by a plague simply known as The Miracle. It hasn’t exactly been a pretty sight, with monstrous creatures popping up everywhere, religion being twisted into an abomination and mounds of bodies to be found in several areas. This is where The Penitent One wakes up, being the only survivor of a gigantic massacre. And armed with giant, thorny sword called the Mea Culpa and having undergone a baptism of blood, it’s now time to slash your way through the land, figure out what happened, and hopefully stop all of the suffering.

And while it may be suffering, it sure is quite the impressive sight to behold. Blasphemous goes all in on the imagery of religious horror, with scarred nuns, impaled and bleeding angels, cross-wielding bodies sliced in half and several other sights worthy of adorning the finest death metal albums. It’s a grotesque and gory delight, and the superb pixel art only enhances it even further. Not that it’s only for window dressing, as practically every item you encounter has a notable chunk of lore tied into it, which paints the portrait of a world that seems to have been already messed up even before the game began. 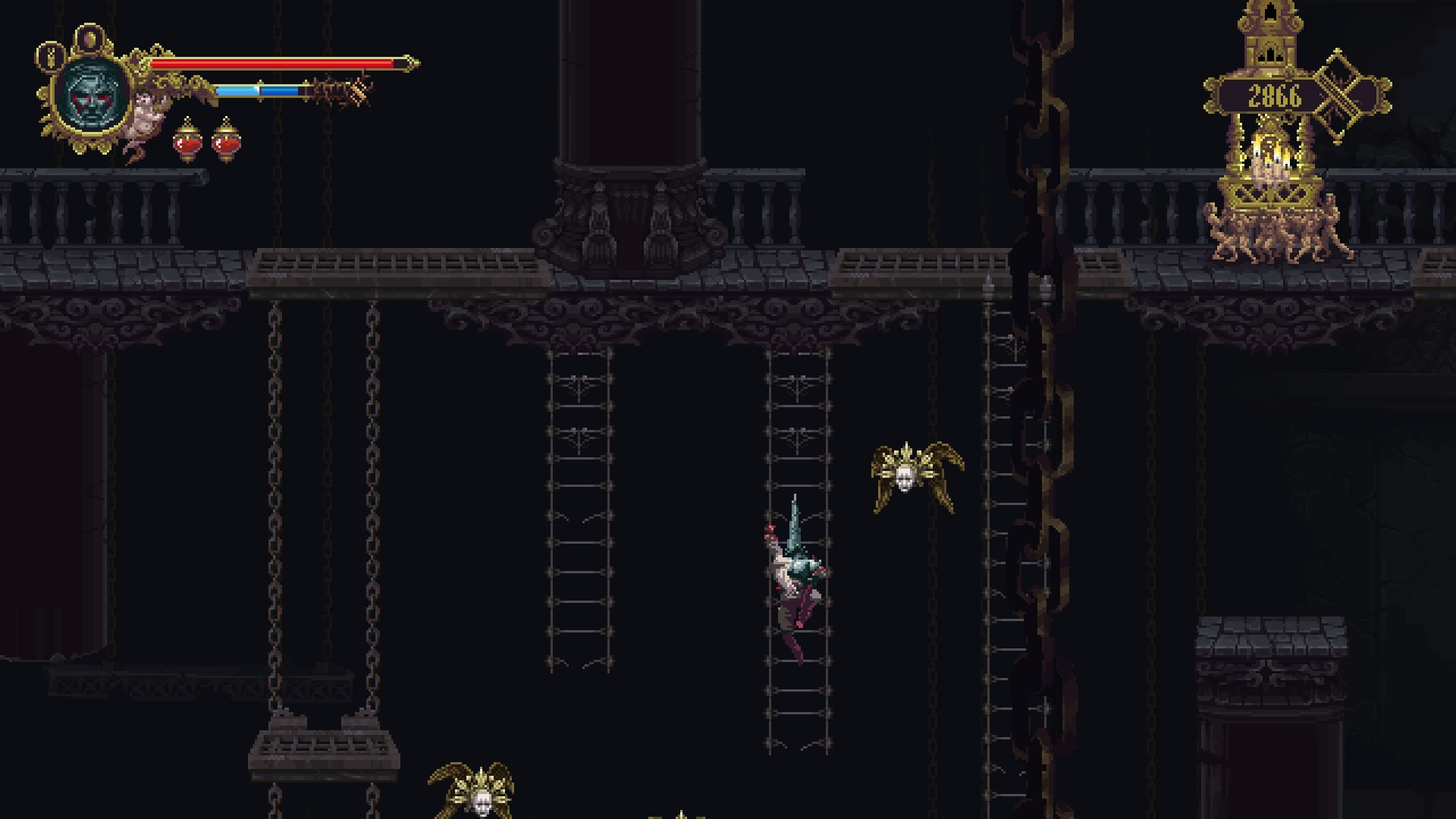 So there’s a lot of sights in Cvstodia to go exploring for, and as this is a metroidvania game, exploration is basically the norm anyway. There are quite a few twisting, maze-like paths to come across, meaning that mere trips from Point A to Point B tend to include a fair amount of detours. Actually, you may not even be heading to Point B anyway, since Blasphemous tends to be quite open. There’s a surprising amount to uncover just from the word “go,” to the point where it turns out the very first boss I tackled and the levels preceding it seem to have actually been recommended for later parts of the game instead, according to more than a few guides. So while there are some restrictions (such as the second half of the world being walled off until you take down three bosses), there is a nice feeling of being able to get lost in the game’s world.

But yes, there will be certain areas you can’t access until later, per metroidvania tradition. Blasphemous feels a bit different in handling this, though. The typical formula is that there’s an obstacle preventing you from proceeding, and you need a new skill to get past it. There’s a high ledge, so you need a double jump, et cetera. And there are several moments like that here where you need to equip relics to gain skills like being able to survive in poisonous miasma, seeing hidden ledges that you can jump on and getting to grow huge roots that you can climb, which are all fun to unlock and use. But oddly, these parts rarely ever surface when it comes to following the path towards the main story, which has more gates and mechanisms to unlock. Instead, relics are mainly used for secrets. 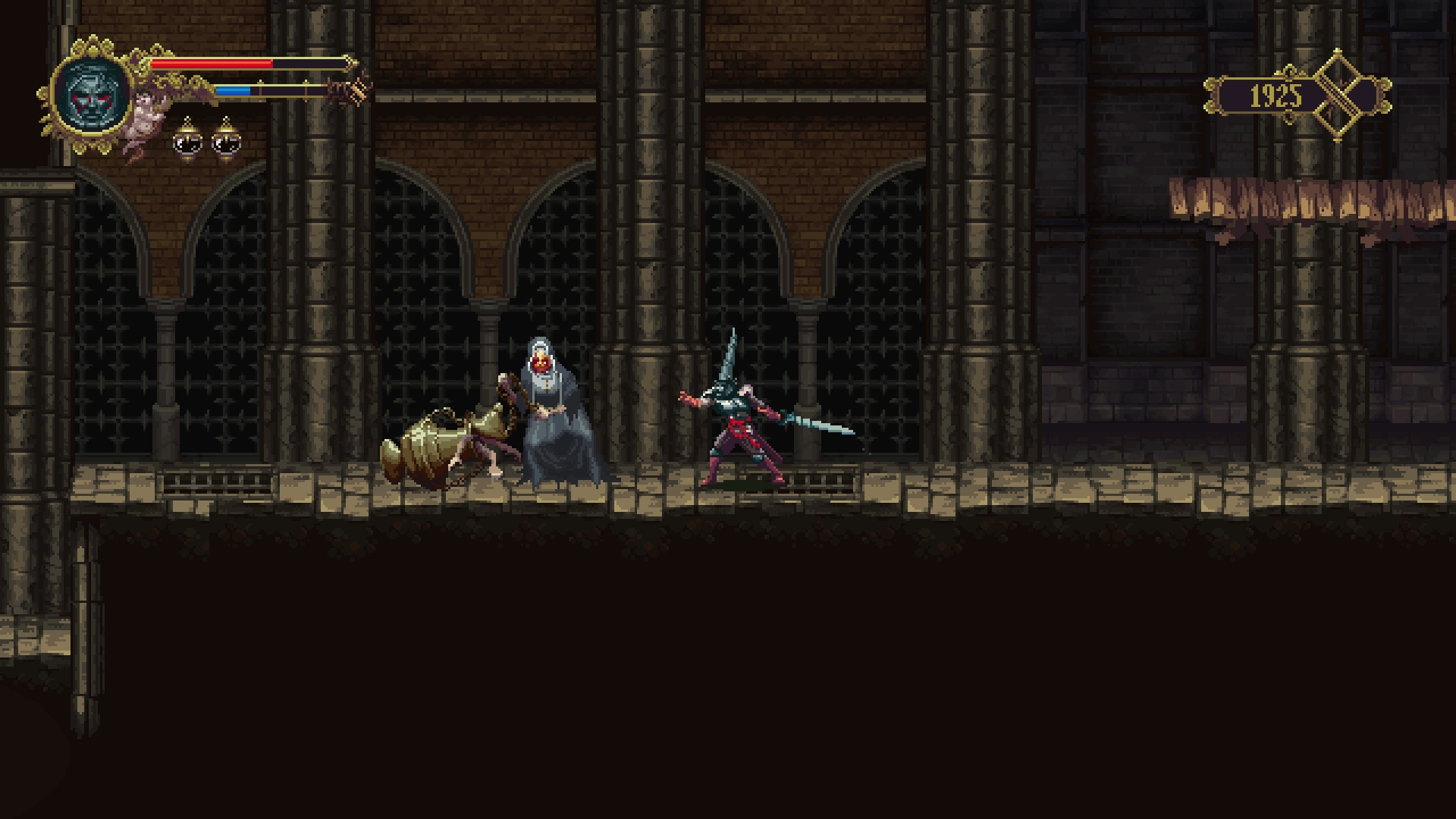 And there are a lot of secrets. As mentioned before, they’re a treat to discover just for the lore alone, including collectibles that are actually the bones of various notable figures, but there’s a lot to find that helps beef you up as well. Rosary beads that provide passive abilities, prayers that allow for powerful special moves, sword hearts that enhance Mea Culpa’s abilities at a cost, and a fair amount of quest items, even for quests you haven’t fully come across yet. You never know exactly what you’ll come across, but with a keen eye and an urge to seek anything interesting out, every small possible hunt becomes a quick thrill.

The quests in Blasphemous are intriguing as well, requiring you to decode a fair chunk of the game’s lore, remember areas of interest and even work out the occasional puzzle in order to earn your various rewards. They’re tricky, but can be enjoyable. Plus, it’s always nice to see a game such as this challenge you in other areas aside from combat. Not that the combat is lacking, mind you. A lot of it is simple swordplay, but easy to pull of and hard to master, especially when it comes to knowing the exact time to parry an attack. Plus, you can upgrade the Mea Culpa at various shrines, earning new abilities such as dodge attacks and charged slashes. Getting these costs tears that you earn from enemies which act as currency, though, and they don’t come easy.

Actually, let me correct that: they do come easy when taking out enemies, for the most part, but you may find yourself spending the tears on necessary assists instead. You can guilt each time you die, which infects the fervor that you can earn and hampers you from pulling off special attacks. And if you can’t track down the ghost you’ve left behind in the area where you died, then you have to find an area where you can pay tears to absolve guilt. And in order to avoid this fate, you have bile vessels that you can collect and fill to drink to restore health, which you can refill along with your whole health at a prie dieu, which also acts as your checkpoint where you can save (so bonfires and Estus flasks, really). So Blasphemous presents itself with a good balance of challenge while being fair…for the most part. 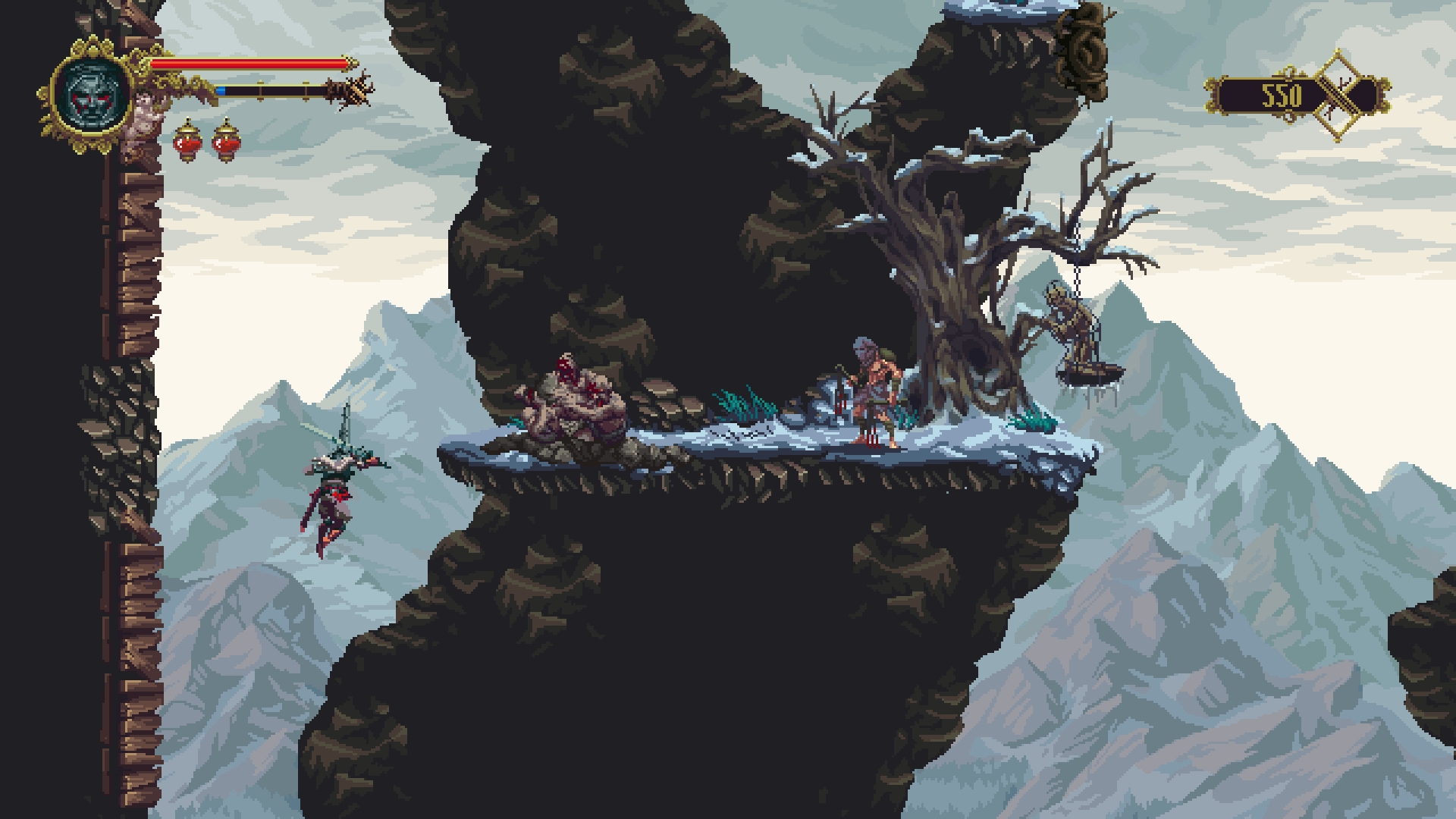 There’s one thing the average fan of metroidvania games and titles inspired by Dark Souls desire, and that’s a nice and meaty challenge. But even those of us who crave challenge still have to call bull at anything that feels especially cheap. If you’re as well-versed in TV Tropes as I am, then you may be familiar with Goddamned Bats and Demonic Spiders, the types of regular enemies that are the bane of one’s existence. Well, it feels like Blasphemous has no shortage of those. More than a few enemies easily seem capable of draining a good half of your health with just one blow, not helped by some ludicrous hitboxes in some cases.

As mentioned earlier, I basically skipped ahead to what’s supposed to be the area with about the second or third boss you fight, so one could say that maybe the enemies were just too tough because I wasn’t appropriately prepared with additional Mea Culpa skills or extra Bile Vessels that I could have picked up. But that didn’t feel like the case (besides, apparently you have to beat Our Lady of the Charred Visage first in order to avoid being locked out of a side quest, so damned if you do, damned if you don’t). Instead it feels like it comes down to sloppy level design and enemy placement at times. A level that might work perfectly in metroidvania games doesn’t always work perfectly with souls-likes, it seems.

To elaborate, the level in Blasphemous that I ended up cursing at for a while was the Graveyard of the Peaks. It’s a snowy, mostly vertical stretch of mountain areas that you have to climb up. It also has platforms that can vanish beneath your feet after a while, winds that can blow you in different directions and bottomless pits that instantly kill you. Basically, it has a lot of small platforms that can require precision. And in this area, you’re expected to deal with living walls that slash with little area to dodge on and reaper-esque enemies that float away from you until they’re ready to dash into you, taking away more health, each requiring at least five hits to take down, and in both cases they are capable of knocking you into the aforementioned bottomless pits. 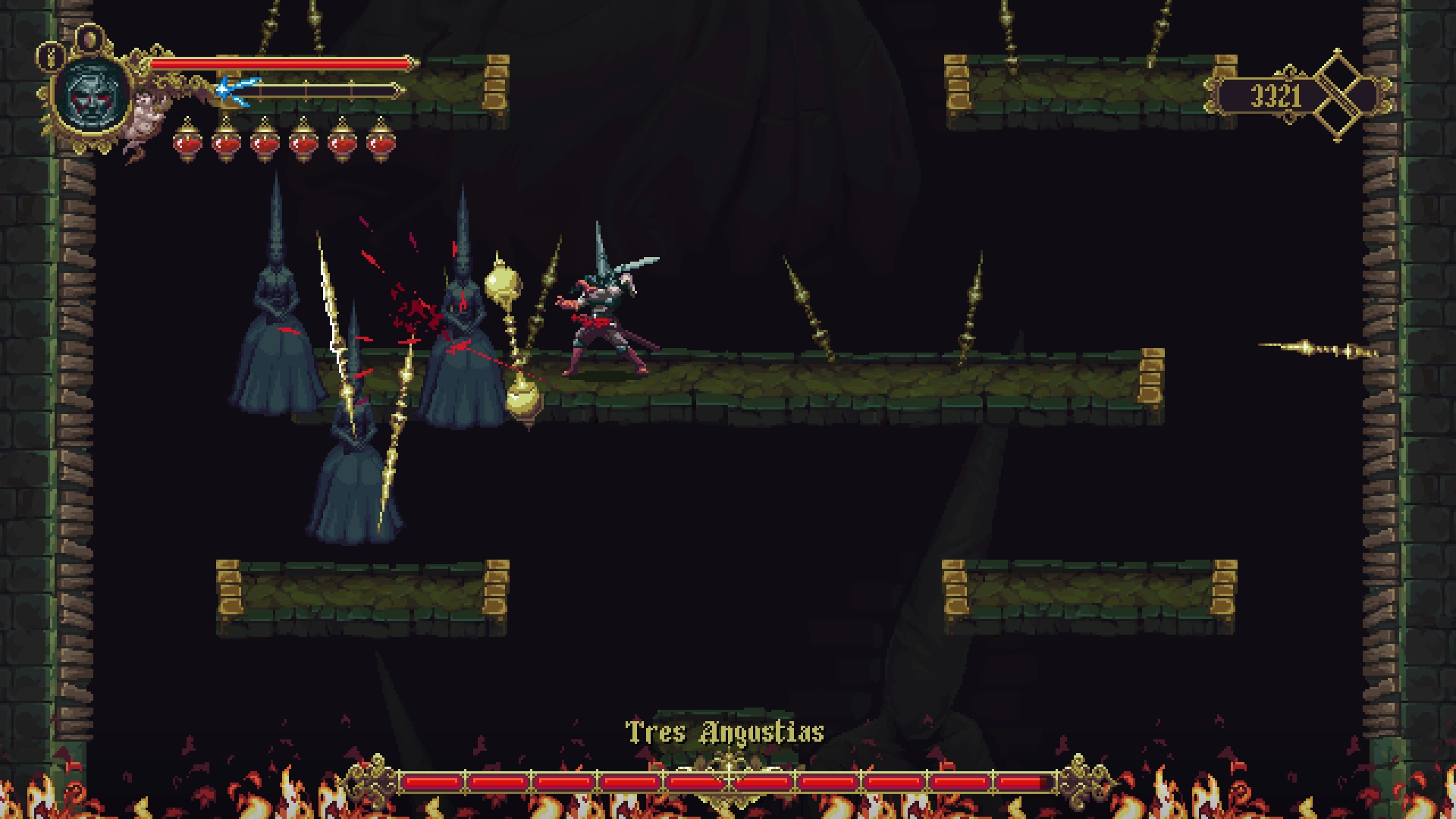 Basically, it felt like the hazards in the level’s environment, including the emphasis on climbing upward, didn’t mesh as well with the enemies they included. It also didn’t help that the level right after it, the Convent of Our Lady of the Charred Visage, was much better in its enemies and level design, giving you wide areas with a lot of room to dodge and move around during combat (even skipping it if you desire), and the signature hazard here, boiling oil that fell from the ceiling, didn’t intervene as much.

And the Graveyard wasn’t the only level with similar issues. Areas like Jondo and Grievance Ascends also had moments where an enemy can knock you into spikes or a miasma-filled pit, as well as multiple enemies that can basically chain attacks with almost no time for recovery. Not helping is that the action doesn’t pause when using Bile Vessels, so you can take one during a boss battle when you need it, only for one attack during this time to basically nullify the health gained.

Also not helping? The fact that there are limited fast travel areas and that a death knocks you all the way back to the last prie dieu you activated. Meaning there are long stretches where you will have to deal with these enemies and hazards again and it can just get a bit tedious at times. Sure, we need a way to gather tears from enemies in order to purchase upgrades, items and other things, but there do seem to be too many times where one misstep or a sucker punch means having to go through a lot to get back to where you are. Blasphemous may have a grotesque yet incredible world, but it could stand to be structured better. 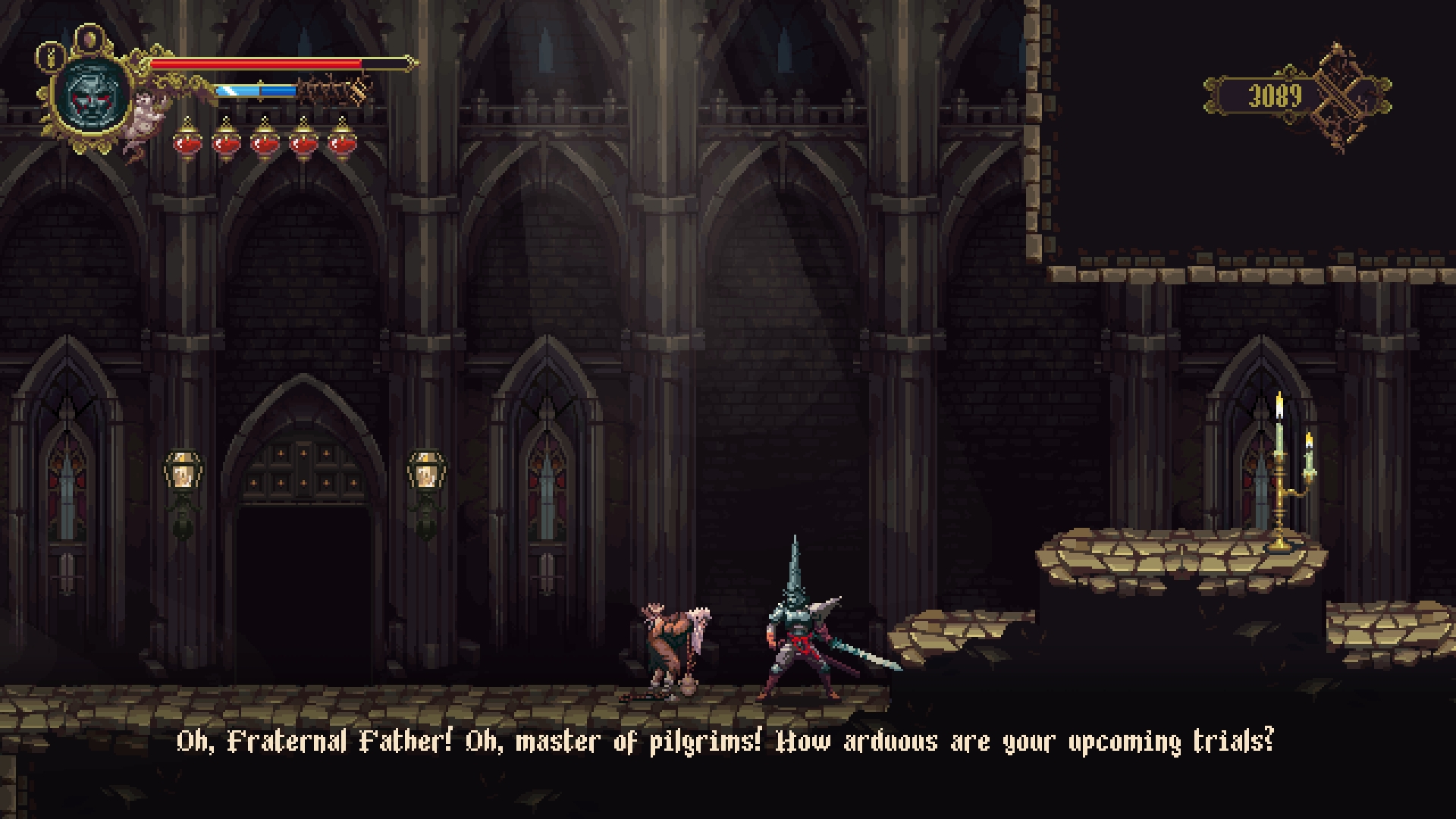 Praise be to Blasphemous, for it’s an impressive game that has truly joined together the peanut-butter-and-chocolate-style union that is souls-likes and metroidvania games. While certain levels and enemies could benefit from a bit more polish, the end result is still a sinful delight filled with heavily-enjoyable combat, tons of areas to explore and secrets to uncover, and some jaw-dropping (if brutal) sights. It may be a game filled with countless unholy terrors, but it also oddly has a lot of love put into it as well, so don’t miss out on it (if you don’t mind the occasional nightmare).