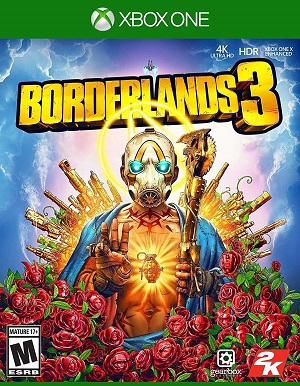 It’s hard to believe that Borderlands launched ten years ago in 2009. Gearbox Software’s pet project launched among hotly-anticipated sequels like Call of Duty: Modern Warfare 2, Uncharted 2: Among Thieves and Assassin’s Creed II, but managed to stand out with its unique brand of humor, looting and co-op action. Fast-forward to 2019 and Borderlands is its own mega-franchise with a sequel, a Pre-Sequel and critically-acclaimed spin-off. It’s been a long wait for the grand finale and Borderlands 3 has finally arrived at a time when the industry has changed mightily since 2014’s Borderlands: The Pre-Sequel. Does Borderlands 3 re-capture the magic of the earlier entries or does it belong locked away in one of Pandora’s Vaults?

Borderlands 3 takes place seven years after the events of Borderlands 2. Pandora remains as desolate a place as ever, but things are changing for the worse. The Calypso Twins, Tyreen and Troy, have moved in and used their streaming capabilities to coalesce all the various Psycho clans into a single cult, the Children of the Vault. You play as one of four new Vault Hunters (Zane, Amara, Moze and FL4K) who answer the call of the Crimson Raiders. Working with series mainstays like Lilith, Claptrap and Dr. Tannis, you travel the galaxy to put a stop to the Calypso Twins’ plans to open legendary Vaults.

Borderlands’ narrative has progressively gained more importance with each new entry. Borderlands presented itself with a rather straightforward plot about hunters looking for a Vault. Borderlands 2 expanded upon that premise with a great villain, plenty of plot twists, and expanding the backstories of old and new characters. The Pre-Sequel developed Handsome Jack’s story and introduced characters that would become villains in Borderlands 2. Finally, Tales from the Borderlands crafted the most competent narrative the series has seen to date. Unfortunately, Borderlands 3’s story gets lost in the noise of the game’s other activities. 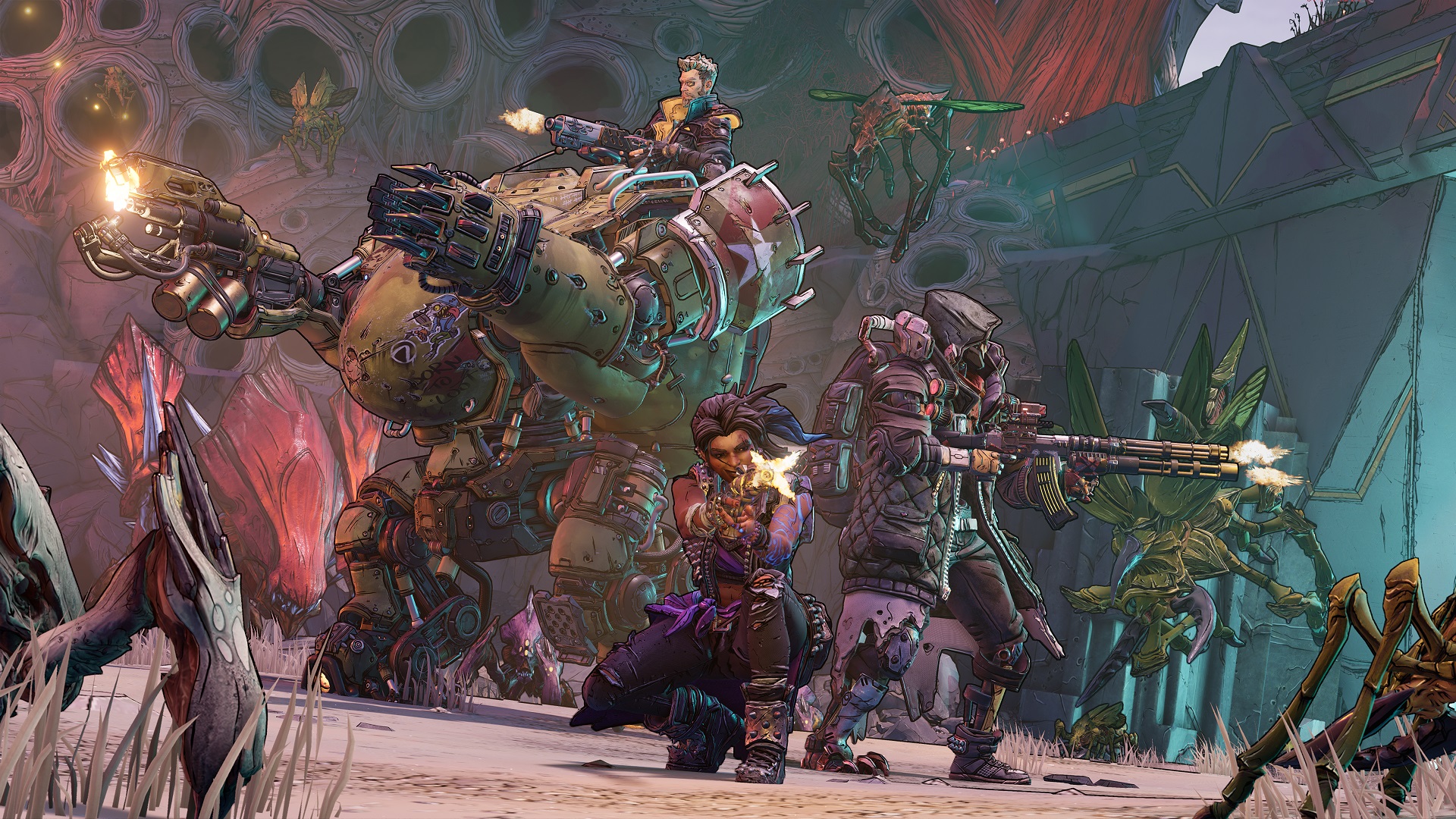 The story is, once again, a hunt for a Vault. In many ways, Borderlands 3 feels like a Greatest Hits collection, with missions used mostly to reintroduce fan-favorite characters from previous games. It’s nice seeing characters like Tina, Sir Hammerlock, Aurelia, and Rhys pop up, but they rarely stick around long enough. Instead, they’re quickly dropped in favor of some of the franchise’s less exciting characters.

Probably Borderlands 3’s greatest narrative weakness is the lack of a robust central antagonist. It was always going to be difficult to escape the shadow of Handsome Jack, and the Calypso Twins don’t manage to get close. Presented as a commentary on today’s culture, the Calypso Twins would have been perfect for dissecting streaming culture, fandom and corporate obsessiveness with chasing popular trends. The commentary never materializes, however, and once the Twins’ motivations are revealed, they come off as generic bad guys.

As for humor, most of Borderlands 3’s falls flat. In many ways, Borderlands 3’s humorless jokes fall into the same hole as Battleborn. The game tries hard to be badass and funny, but rarely comes across as either. Pretty much all the jokes feel crass and crude and are often obnoxious. Borderlands 3’s writing is at its best during side quests, which often play up pop culture references and lead to fantastic Easter Eggs. While not all strike comedic gold, they’re far more consistent than the main missions. 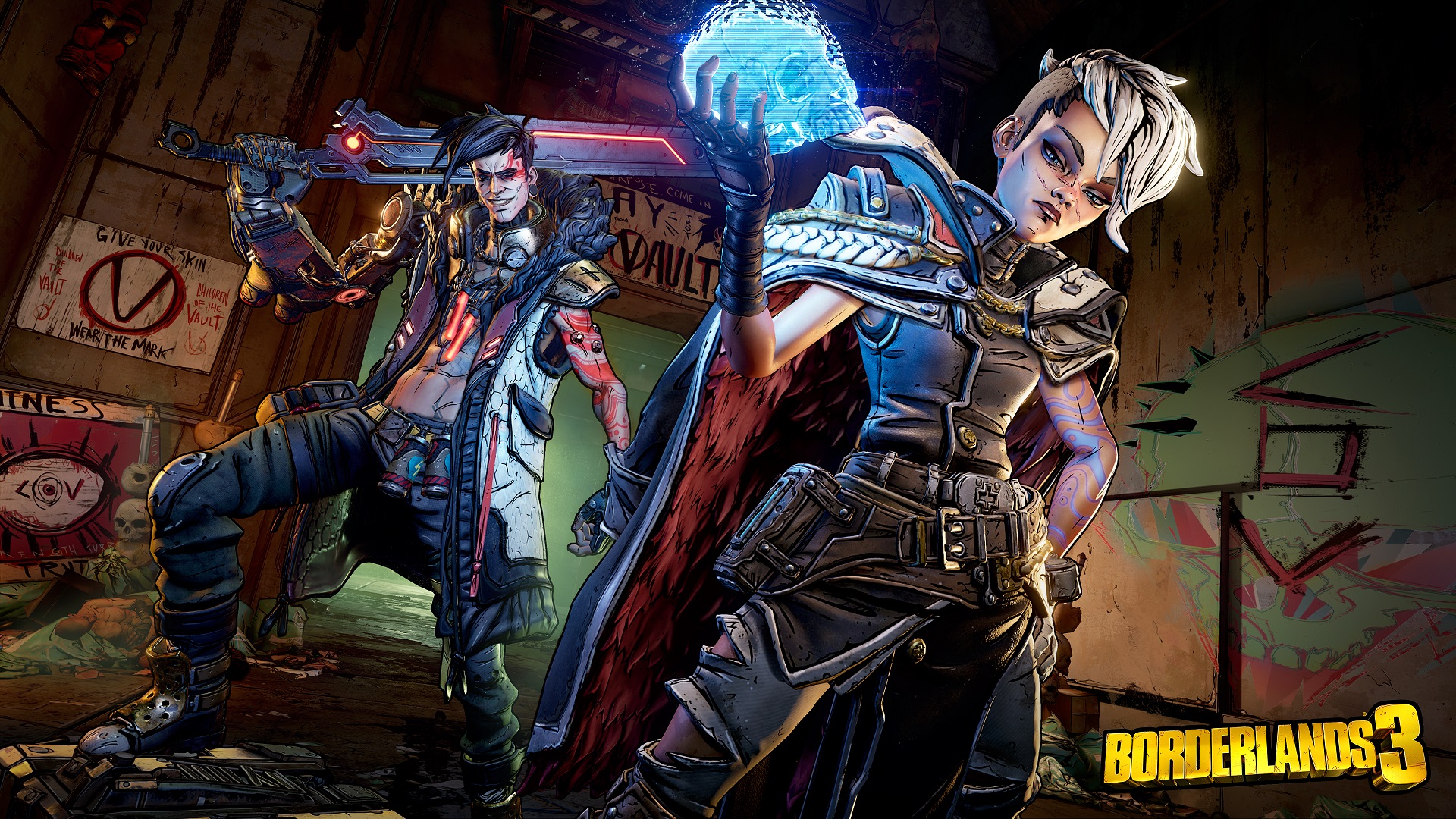 What Borderlands 3 lacks in story it makes up for with its gameplay. The game doesn’t do anything particularly new with the shooting mechanics but does tighten things up while expanding how players interact with the game world and their Vault Hunter. Gearbox has done an excellent job tightening up the shooting controls. Taking shots, whether from the hip or down the sight, feels accurate, and the feedback satisfying. It’s the new changes to the movement system, however, that makes the most significant difference. Being able to slide and clamber over objects vastly increases the player’s mobility and allows for greater maneuverability around the battlefield.

Players are given even more control over their Vault Hunters than previous games. Whereas past Vault Hunters got one ultimate ability, Borderlands 3 provides each Vault Hunter with three Action Skills. The new system gives players more latitude to customize their character, especially since only one or two Action Skills can be taken into battle. A more defensive player may want to use Zane’s Digi-Clone and Barrier. An offensive player that likes to dominate enemies could consider Moze’s railgun to destroy shields and minigun to decimate the defenseless foes. Each Action Skill can be further altered through Augments unlocked as you progress through the skill tree. 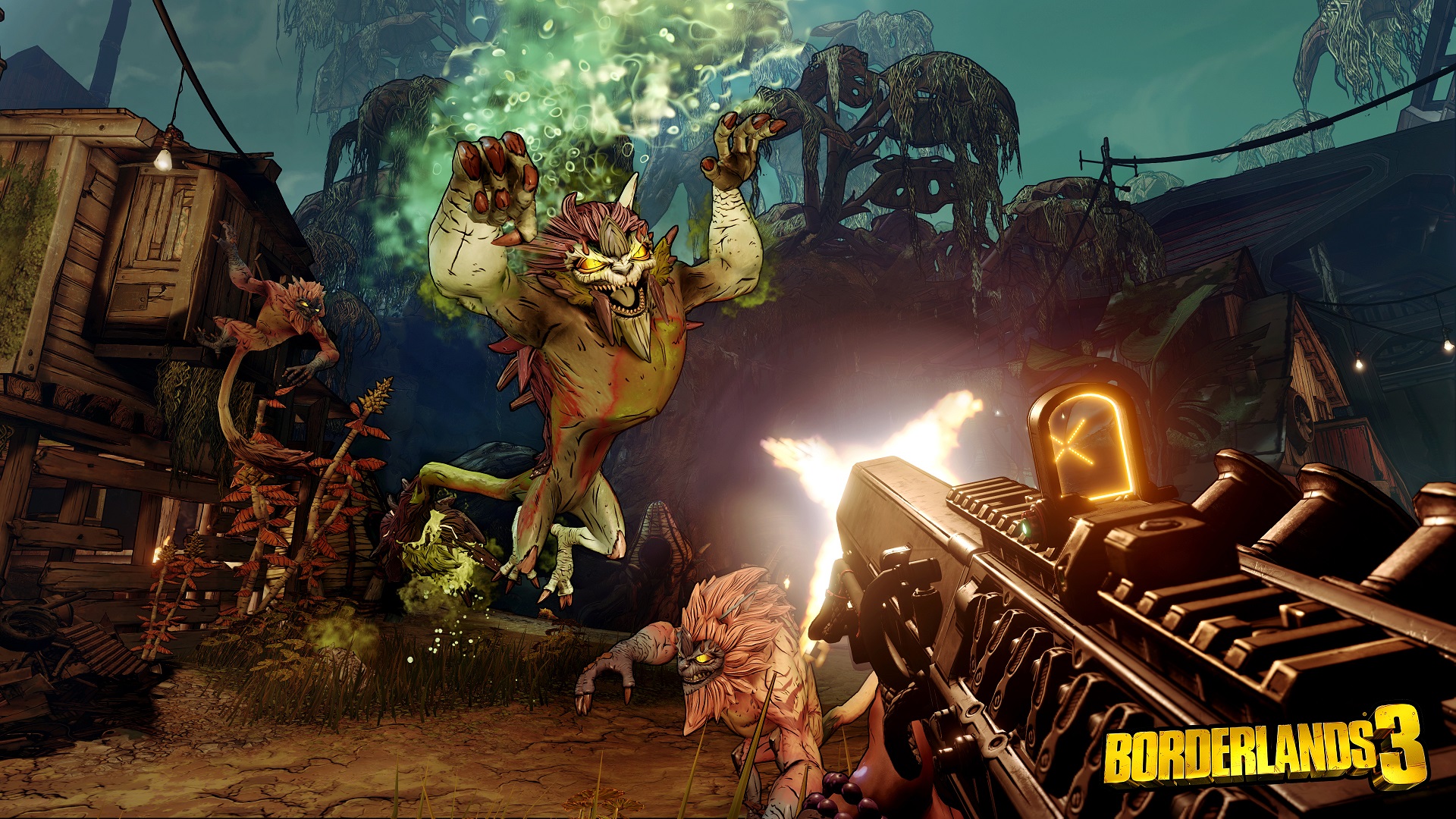 It’s the guns, however, that still steal the show. The sheer amount of weaponry available to players is insane and new additions like alternate fire modes make collecting guns even more exciting. Borderland’s variety and number of weapons is something no other looter shooter has managed to replicate to this day. It can get a bit overwhelming, but it’s fantastic when you find that right combination of weaponry.

Borderlands 3 offers up a big amount of customization and weaponry to keep fights interesting. Each character feels unique, and it’s especially fun working with a whole squad and seeing how all the powers mesh together. Like previous games, Borderlands 3 is playabale with up to four-players online. PS4 and Xbox One both support two-player split-screen, which is, unfortunately, a downgrade from four-player split-screen in Borderlands: The Handsome Collection. Borderlands 3 is at its best when playing with friends. Those looking for a solo experience, however, can still have a good time. 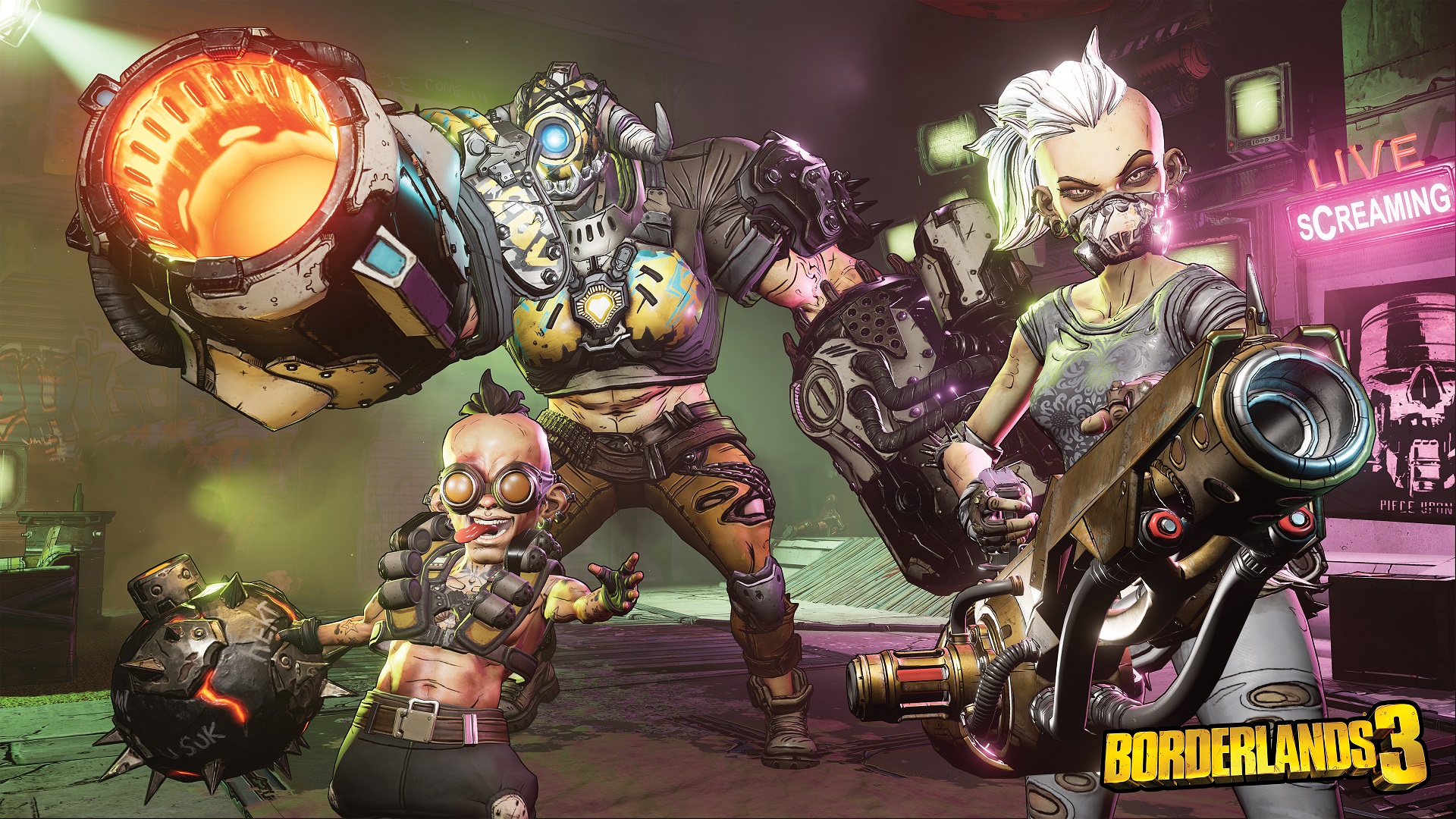 As fun as it is to play Borderlands 3, the play areas and mission design do hamper the experience. Despite traveling to other planets, there are minimal changes outside the scenery. Eden-6 may be a swamp and Promethea might be a city, but functionally they’re just like Pandora. You have small corridor areas and then big areas to drive vehicles around in. The locales, enemy names and NPCs may change, but a gunfight on Pandora feels exactly like a gunfight on Eden-6.

Missions also start to get tedious as the game progresses. Towards the end of the game, it’s common to fight waves of enemies in a single area, push forward and then fight waves of enemies in the next area. Battles never evolve in any meaningful way, nor does the difficulty ramp up over time. Add-on continuous back-tracking, loading screens between regions, bullet-sponge bosses, and a laggy menu system, and you have a game that tends to drag towards the end.

Borderlands 3 drops Unreal 3 and embraces Unreal 4 to deliver a visual experience that’s leaps and bounds above previous titles. Character models in particular have received an obvious upgrade with more noticeable details. The switch to Unreal 4 has also allowed for the creation of more creative play spaces. These are the most extensive and most detailed locales in any Borderlands game. It was a much-needed upgrade after all these years. The game also delivers a solid audio experience with a good score and solid voice acting. While it’s disappointing that certain voice actors didn’t reprise their roles, the voice cast on hand does an admirable job with the material. 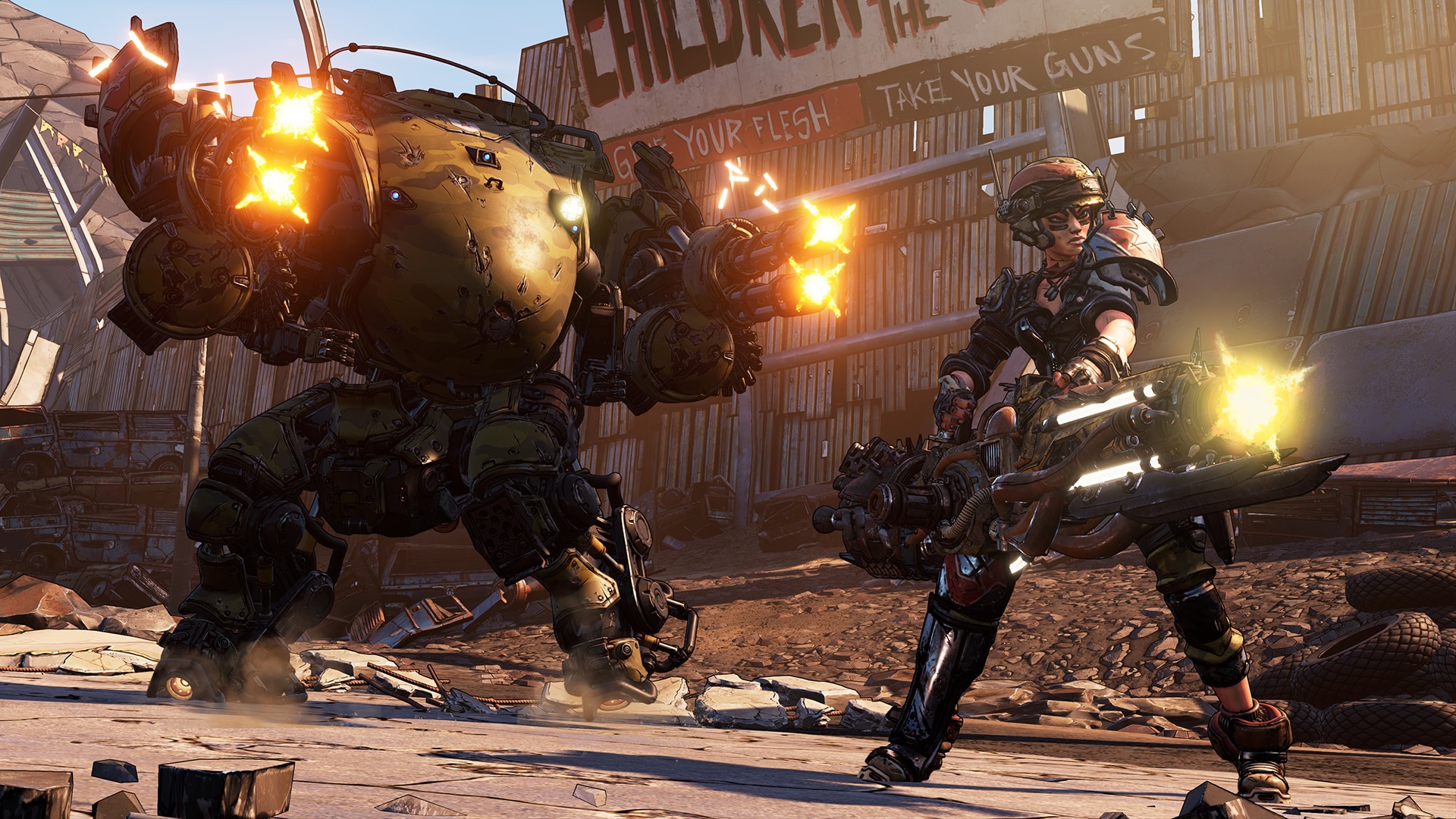 What can’t be overlooked about Borderlands 3 are the technical issues. The framerate continuously sputters (especially when riding in vehicles) regardless of platform, audio frequently cuts in and out, and texture pop-in continually distracts from the visuals. The enhanced consoles get hit the hardest with neither the included Performance or Resolution modes turning in solid performances. There were even times where the game caused the Xbox One X to overheat and shut down.

Unfortunately the technical problems run deeper than that; deep enough to affect the game experience. The performance craters whenever you open and try to navigate the Echo menus, a problem that’s exacerbated by how many people you play with. Considering how often you must use the Echo to track quests, check the map, compare and equip new weapons, and upgrade your character, it quickly becomes a huge pain. It’s disappointing to see technical issues harm an otherwise excellent presentation. 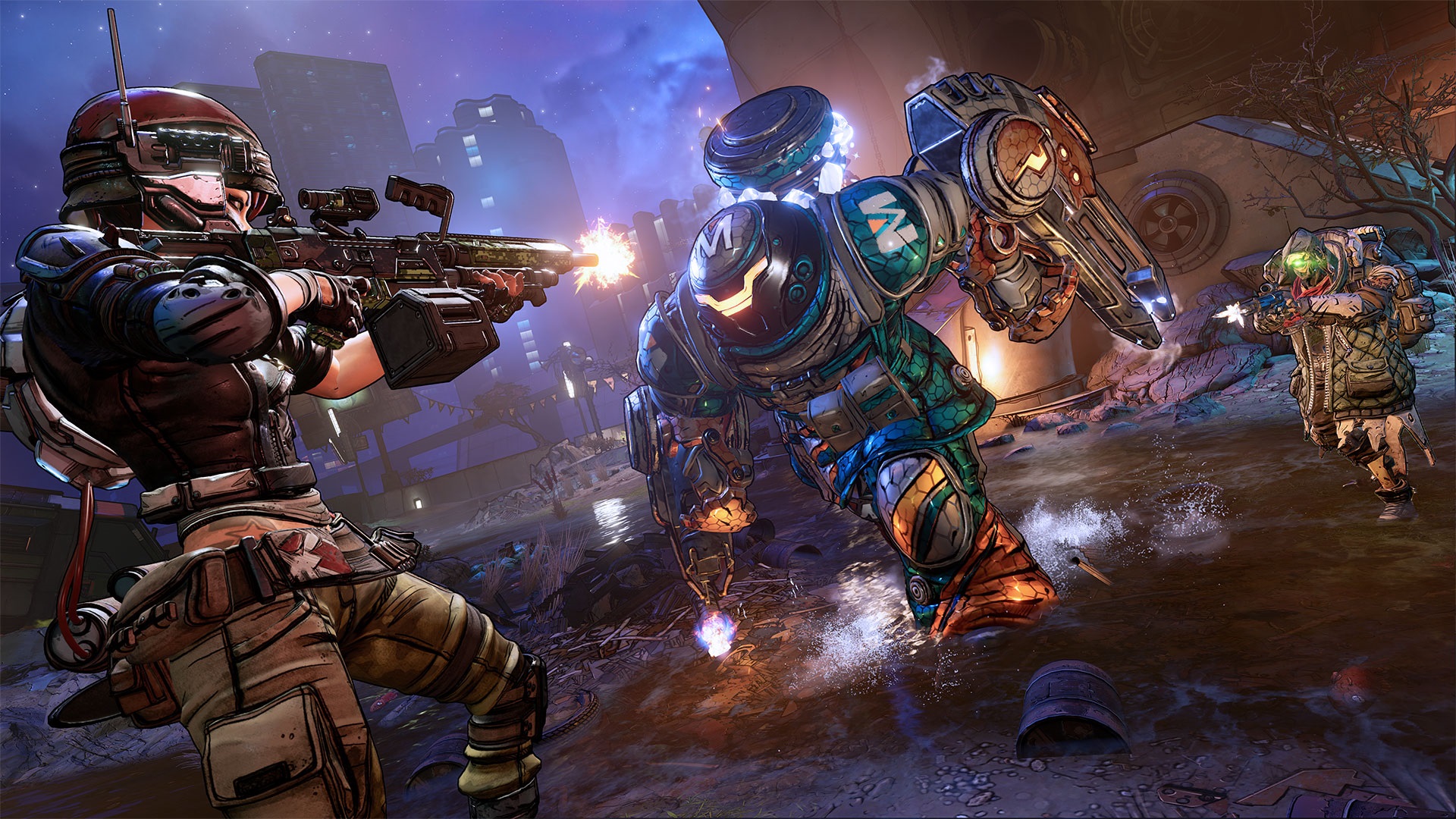 The phrase, “doesn’t do anything particularly new,” is apt to describe Borderlands 3. It’s more Borderlands and that’s just fine for fans of the franchise. Gearbox has done an excellent job crafting an experience fans will feel familiar with. Additional touches, like the increased maneuverability and in-depth Vault Hunter customization, help improve the experience and bring Borderlands 3 more in line with current standards. The core looting and shooting are as fun as ever and playing around with the character’s different skill trees rarely gets old. Exploring new worlds is novel, though it would have been nice to see them differentiated more from Pandora. The story and missions never quite hit the same highs as the previous game, but the core gameplay loop is more than enough to suck you in. Unfortunately, it’s hard to ignore the technical issues, which persist throughout the entire experience and hamper it. Borderlands 3 is a fun, looting experience — just don’t expect a fresh or completely polished adventure.