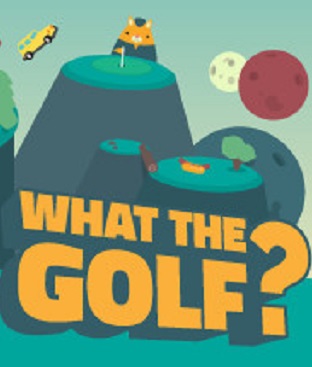 While realistic, licensed sports games may often be the big sellers, arcade-style, over-the top sports have also grown a fond reputation for taking the core fundamentals of a well-known activity and pushing them to their extreme. From the retro hits of NFL Blitz and NBA Jam, to Mario’s various ventures into tennis, baseball and the like, to cult classics like Lethal League and Videoball, these titles often have the opportunity to garner a wider, more casual audience thanks to their easy-to-pick up nature and short runtimes. Although all of the aforementioned games are usually associated with their multiplayer components, there’s a space out there for smaller single player sports titles as well, and the five person Denmark-based developer Triband is looking to capitalize on that market with their own bizarre take on golf. Featuring a variety of themed levels that consistently surprise and amuse, a jolly artstyle and solid golfing mechanics, What the Golf is a chuckle-inducing journey that breaks the limits on the definition of the internationally-renowned sport.

While story elements are usually restricted to the secondary mode of most sports titles, if they’re present at all, What the Golf does have a rather loose plot surrounding its golf-related antics, as the player-controlled ball explores an abandoned science lab that was conducting experiments surrounding the titular sport. These tests represent the levels of the campaign, which are spread throughout the lab overworld and separated by the occasional puzzle, secret or path-blocking computers that represent the boss levels. Traversing this hub is often as close as the game comes to a legitimate golf experience, with an arrow that represents the strength and direction that the player intends to hit the controlled object. As simplistic as this mechanic may seem, it remains a core element of nearly every level no matter how outlandish it gets, and fortunately enough it stays intuitive and mostly predictable in beneficial ways throughout the three hour campaign. While the mouse controls worked well enough for the majority of levels, some of the more frantic challenges benefited from switching to the touch screen, which isn’t necessarily an option considering which platform players end up experiencing the title on. 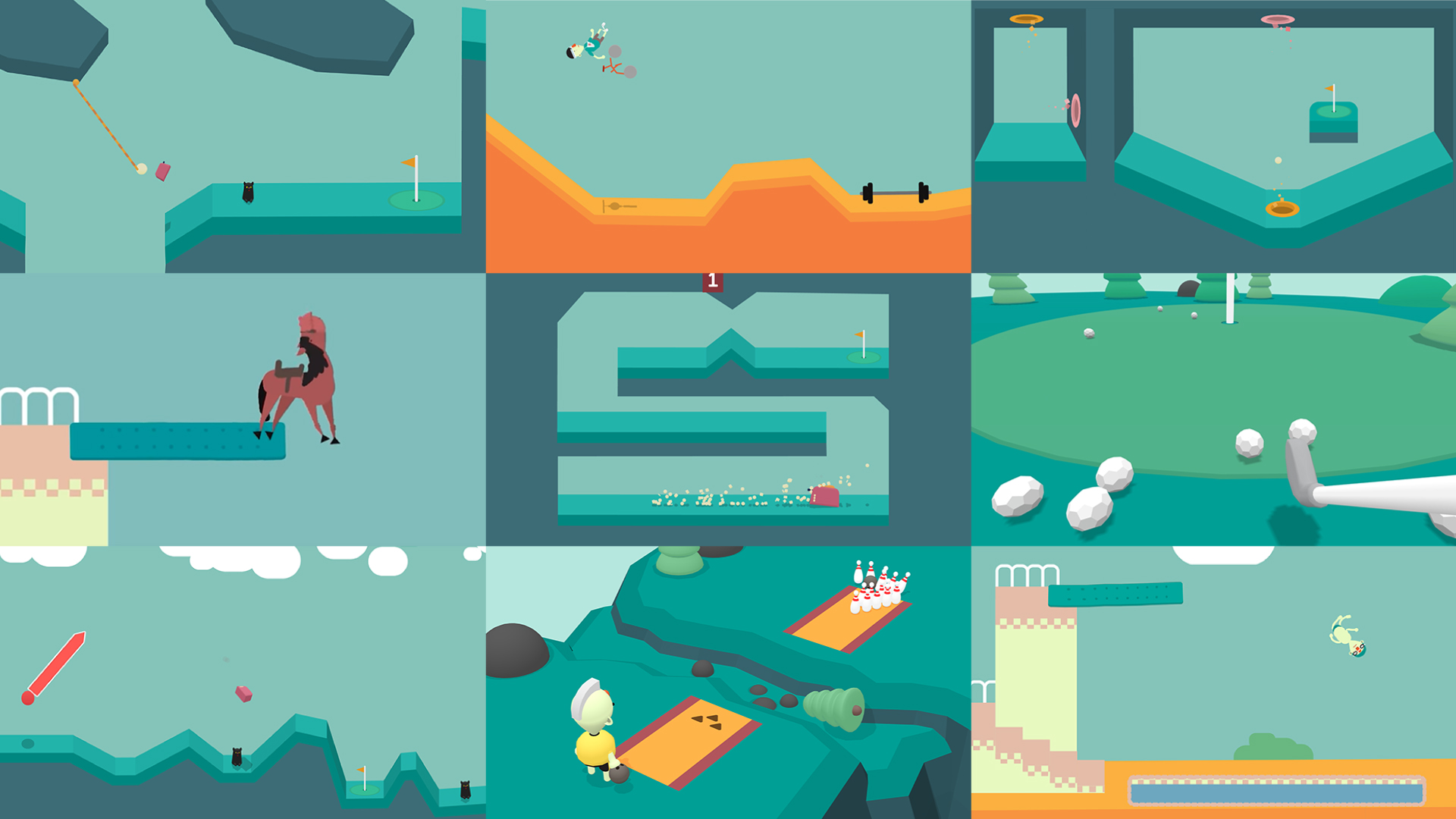 If you’re wondering why I just used the word “frantic” to describe this notoriously calm sport, What the Golf makes it clear within its opening minutes that this is far from a traditional golfing title. Outside of the hub, the player is not usually controlling a golf ball, with the opening levels tasking players with using golf-style mechanics to move a golf club, human and entire house towards the flag, with the completion of these goals often resulting in a “punny” exclamation filling the screen. Each of the dozens of golf-able objects that the player will send flying throughout the adventure have their own physics that become familiar after repeated encounters, allowing for the ability to overcome new obstacles in frequently interesting ways and resulting in a memorable final encounter. The opening moments of every level represent the highest points of enjoyment from What the Golf, as the player attempts to determine what object they will be controlling with the game still managing to surprise even hours after its first level. These curveballs continue to arise thanks to well-implemented references to other games, changes in the player’s perspective or perceivable dimension and even a number of situations where other sports are construed using the golf-centric mechanics in comedic ways.

While the select few musical tracks are relatively simple compositions with the occasional light harmonization of the words “What the Golf” by background singers, the bright, colorful art style drives home the amusing atmosphere that the golf-filled worlds presents, with a nice variety of themed levels and assets across a number of perspectives that set the tone for the coming challenge. Despite one severe bug that happened during the final section of the final level, the game is mostly technically solid even with a high number of objects on the screen, which should make it relatively simple to run across a variety of PCs. While the core adventure can be completed in a number of hours, each level offers three different playthroughs, with the optional secondary and tertiary objectives often representing some of the game’s more skill-heavy moments, such as finishing under a certain number of strokes, as well as some of the most bizarre tasks that stretch the meaning of golf to its fullest. Additional replayability also comes in the form of daily challenges with leaderboards and the promise of additional content updates post-launch. 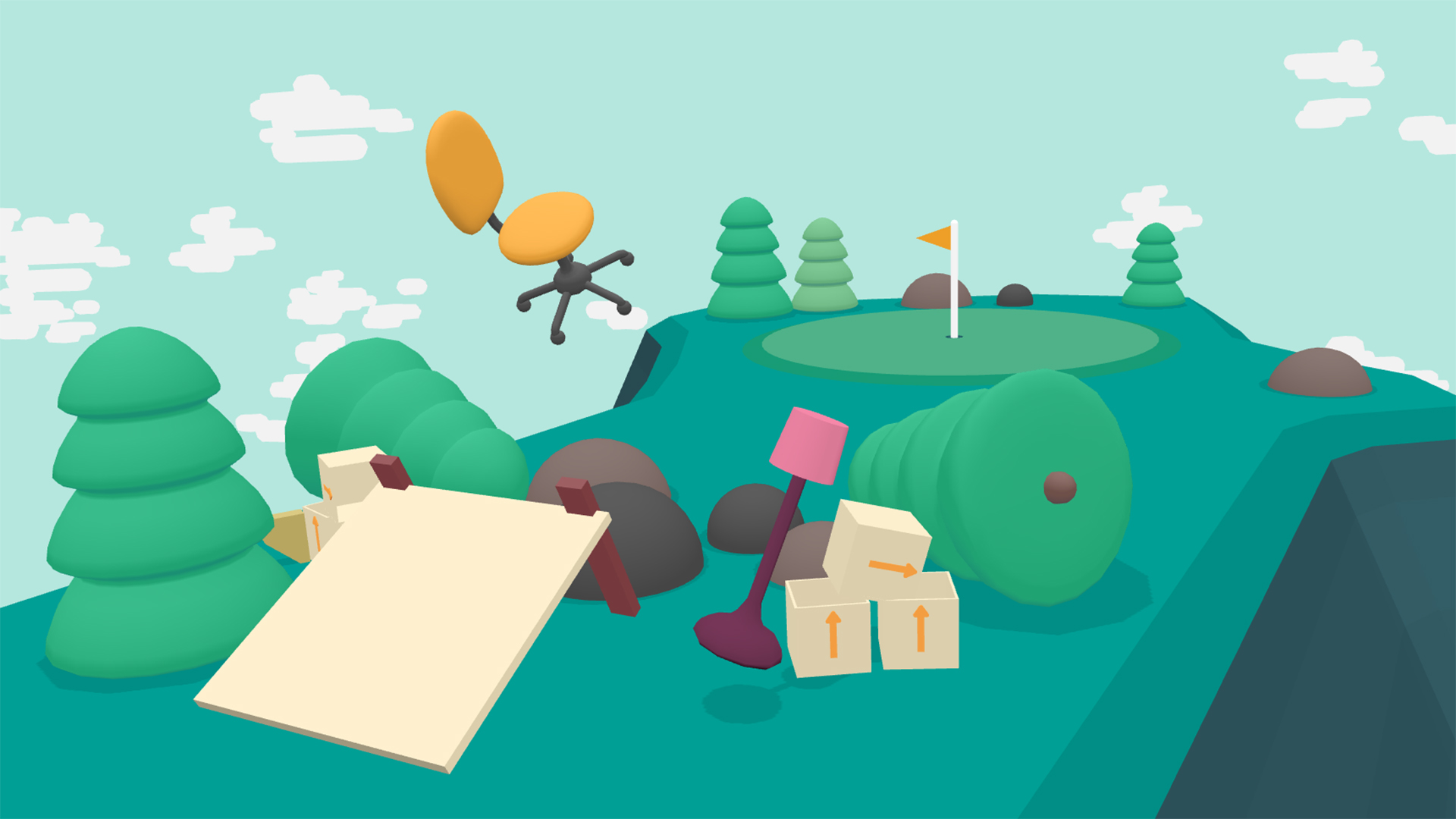 What the Golf is the ultimate parody of the titular sport by boiling it down to its fundamentals and constantly upending the player’s expectations to create a humorous and memorable game. With smart and infrequent references to other games, an appealing aesthetic and reliable mechanics, the relatively brief campaign works well as either a pick-up-and-play title or a fun undertaking to blaze through in an afternoon. Thanks to a core concept that should appeal to sports, puzzle or comedy fans, What the Golf is a promising debut from the small team at Triband that is sure to please gamers of all ages.