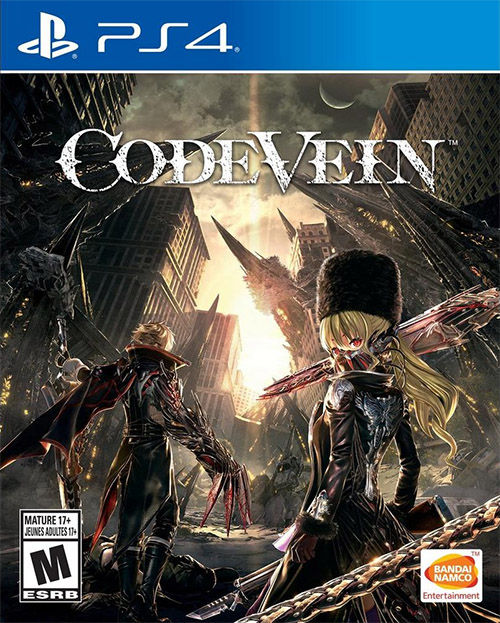 Challenging, but rewarding, games have been around for decades, but it feels like over the past ten years it has been FromSoftware that has perfected the formula. Souls-like titles have been popping up all over the industry, with many trying to replicate what the Japanese studio has established in the action RPG genre. There have been some successes, such as Nioh and Hollow Knight, and others that are not as well regarded, such as Lords of the Fallen and The Surge. Bandai Namco has crafted a new game under the title Code Vein that falls right in the middle, having a decently-challenging adventure that focuses on cooperative play, but is plagued with a handful of flaws as well. Be prepared for an abundance of comparisons to FromSoftware games throughout this review, as Code Vein uses plenty of the same tropes and even plot progressions of their past games. It isn’t binary as there are certain traits Code Vein takes and makes it its own, but there are quite a few elements that mirror Souls games that aren’t as well executed.

The story of Code Vein starts off vague as you awake to a world that’s completely in ruin and roaming deviants are taking people hostage to make them fight monsters in order to find Blood Beads. Unlike Souls games, this is told in a more traditional manner with plenty of cutscenes and expositions to help the player understand what’s going on and why they’re fighting these colossal beings. The world has had a catastrophe of epic proportions which essentially has the undead (Revenants) roaming the world in search of human blood. If they’re unable to feed on a poor soul, they’ll turn frenzied and become uncontrollable monsters. You are special somehow so it’s up to you to find out what has happened in the past and try to lift the curse. Sound familiar? Just as the visuals represent, Code Vein is also very much an anime, with all the unfortunate components that come with it. This includes awkward dialogue, long drawn out cutscenes for no good reason and ridiculously gravity-defying action scenes that are generally cut short. Sometimes it works in its favor, but most of the time it only serves to drag the experience down. Despite this, storytelling and world building is still gratifying as you’ll be able to relive memories of those killed, and can even change the events in the campaign – namely you can save some individuals based on what you have seen. There are plenty of unfortunate souls in here that have experienced less than ideal lives and Code Vein does a fantastic job highlighting their stories. 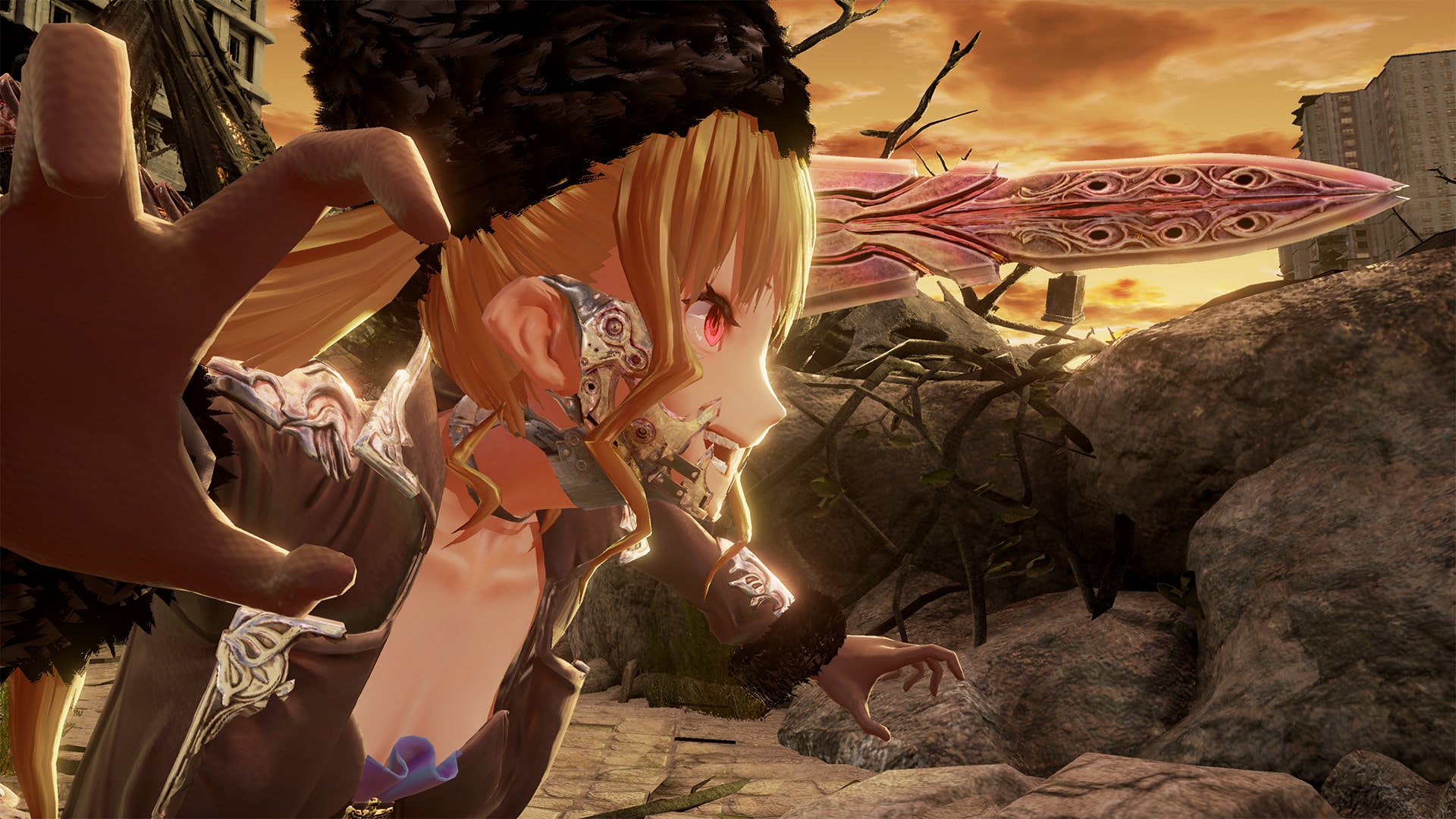 Combat is, well, Souls-esque. You won’t be bringing along a shield, but instead will be able to equip numerous weapon types, each being upgradable with special components found throughout the world. It’s a little more like Bloodborne in a sense, as while you can block, it slowly chips away at your health; more times than not you’re timing dodges, parrying when possible and getting behind an enemy to perform a devastating backstab. Combat is a little clunky, though, as it’s not as refined as it should be. It’s not on the levels of say Lords of the Fallen where it’s overly stiff, but there just doesn’t feel like there’s much of a weight to your actions. For example, hit reactions can be questionable as enemies take a couple strikes before acknowledging they’re taking damage, versus you who will almost always stagger with one blow. This can lead to some unfortunate situations, such as when facing a shield bearer. Even if you get behind him, you can wail on his backside, but he will still slowly turn around, absorbing everything you throw at him, and because he can parry with a single strike, you will find yourself in a compromising position that you shouldn’t have been in the first place. It doesn’t help that the enemy AI patterns are all designated as hunters, meaning they will aggressively chase you down until your last breath, not giving you time to run away or heal. This adds to the level of challenge and ensures suicide runs are less successful, but it can get frustrating when every enemy type is the exact same in this regard.

Speaking of which, we can’t talk about Code Vein without mentioning the difficulty. Unlike Souls games, Code Vein isn’t actually too bad when it comes to challenging scenarios. There were only a couple of bosses that needed a second or third attempt, with the vast majority of them are somewhat predictable. Even in the exploration component, it felt like most of the traps and ambushes occurs in the first two acts of the campaign, with the rest being relatively straightforward. Enemies do still hit hard, with bosses taking anywhere between 25 and 75% of your HP in one fell swoop, but these attacks are not too difficult to predict. With that said, cooperative play is a huge emphasis, even giving you an AI party member to have at all time. The AI for this character is generally incredibly smart and will make your adventures far easier. Because of this, though, I would recommend going solo if you want a bit of a challenge as he does make fights a lot easier. Plus, you never have to hear their annoying, repetitive chatter ever again. 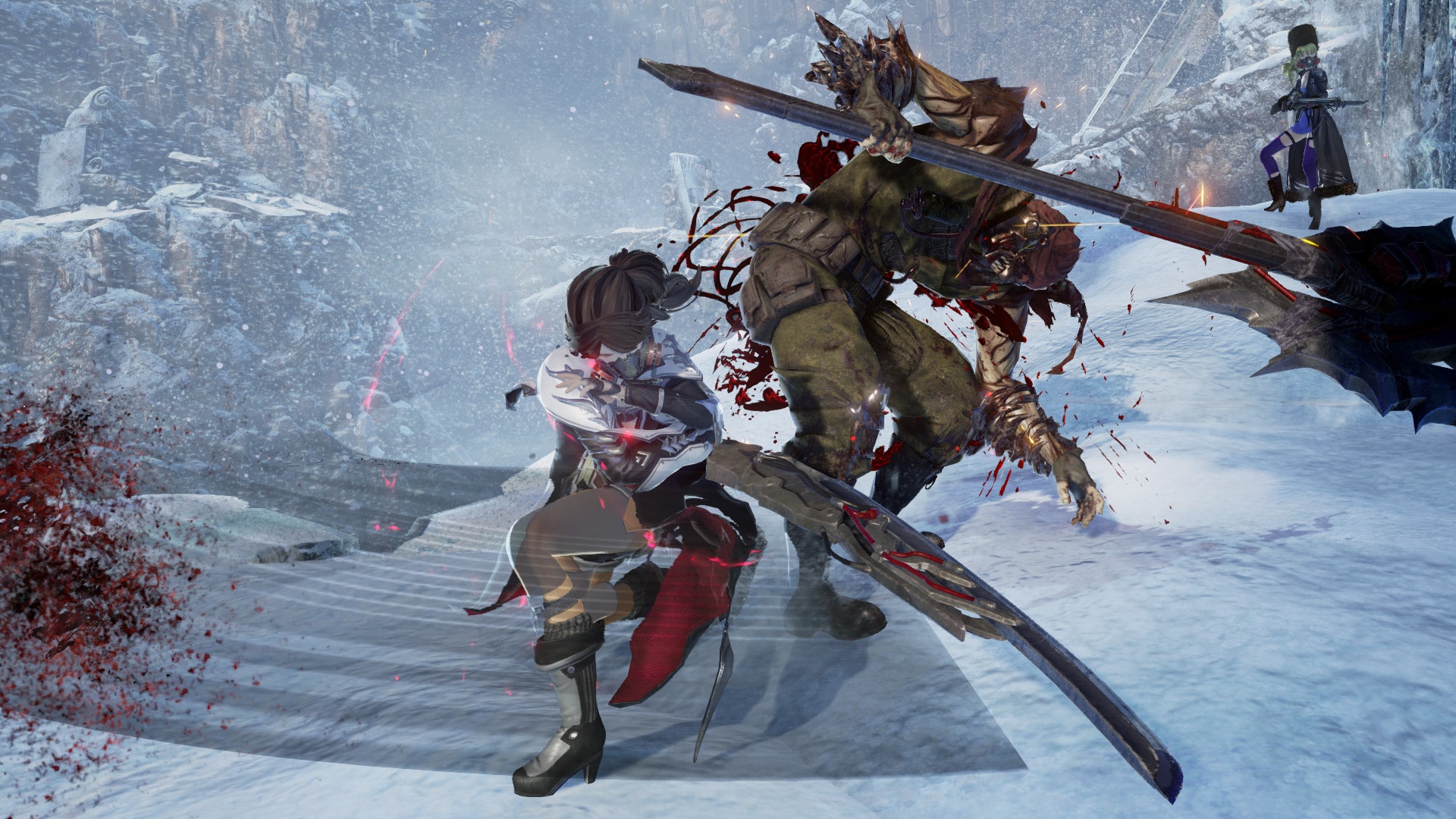 What the Code Vein does incredibly well, though, is not locking you into a specific play style. While you will upgrade your character through individual levels, you aren’t spending points in specific categories. Instead, you’ll be able to earn Blood Codes from your companions and those who died in the world, and inherit their passive and active abilities. The more memories you find, the more abilities you’re able to purchase and use to your advantage. Each Blood Code also comes with their own unique set of attributes, some being great for ranged battle while others might be good for defense and heavy weapons. By the time you want to try something new, you shouldn’t have much trouble transitioning as the EXP and weapon upgrade items scale relatively well. It makes combat all the more creative and encourages experimentation without limiting you based on what path you originally decided on going down. That’s not to mention some of the abilities can be transferred over to different Codes after they are mastered. While the mechanics aren’t as refined as we’ve become accustomed to, this is one of the better systems Bandai Namco has implemented.

The world of Code Vein isn’t as open as you may think. At the beginning you will be given two distinct directions you can take at your own leisure, but after you’ve completed both, which is only a few hours into the story, progress merges into a narrow path. There isn’t anything wrong with a guided story, but it’s the illusion of freedom that’s given. There’s nothing more discouraging in a seemingly vast world where you’re told you can now open a new set of doors, only to realize that two of the three have locked doors behind them. That’s not the biggest problem, though. While there’s a wide variety of locations, the map consistency is put into question. They are decently designed with shortcuts and hidden paths spread across each area, some with ambushes and even, what I will call Invasion events, but while some are sizable, others are short. Take for example the Cathedral location. It’s intricate to the point I became lost on more than one occasion, because there’s a factor of elevation and dead ends. It’s also about three times larger than any other area, so it becomes a lengthy trek to get through. I wish more time was spent in say the snowy area where it has a beautiful design with numerous traps and vicious enemies, but concluded way too soon. 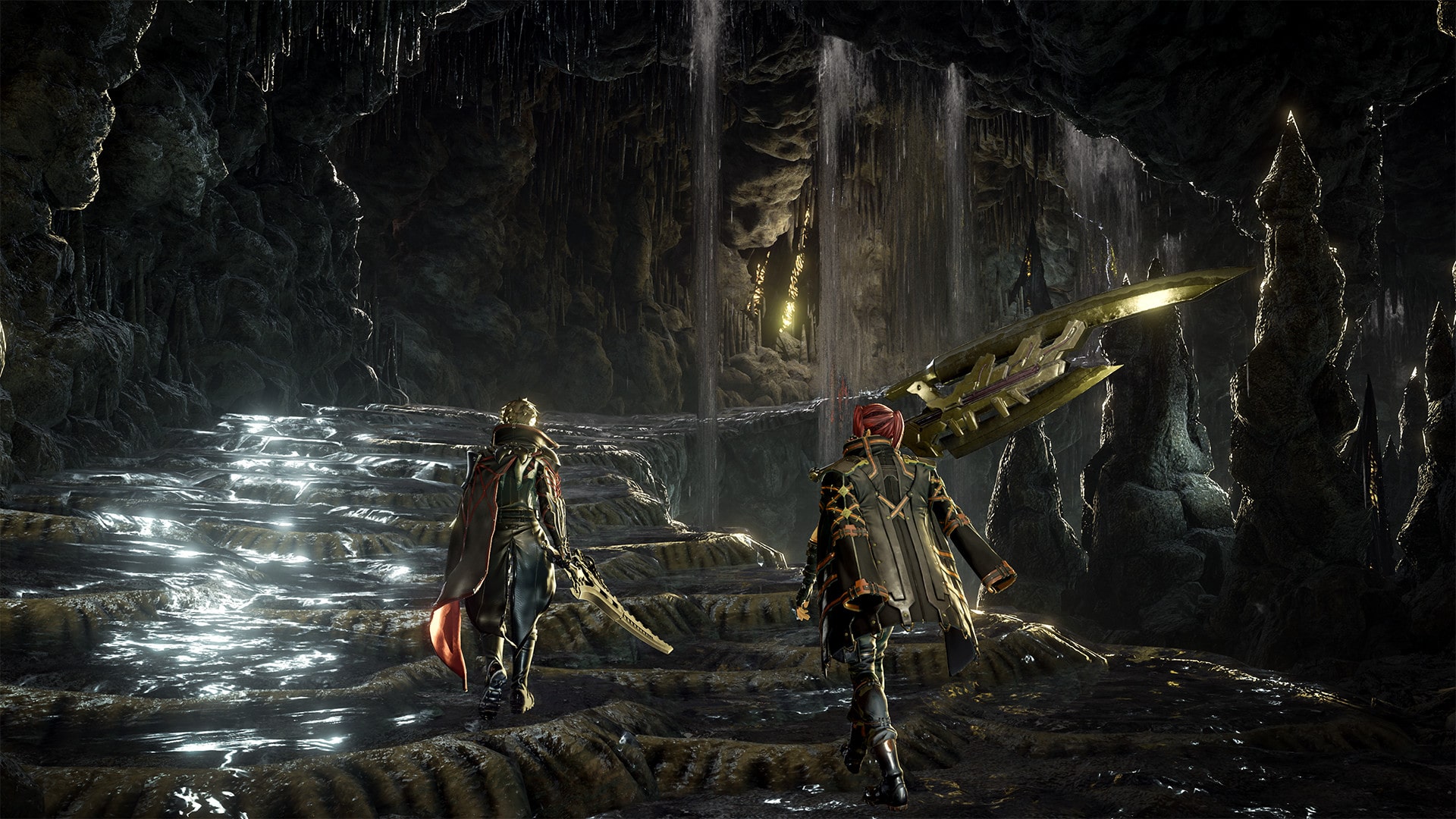 Finally, the save system is also something to quickly touch upon. The auto-save function is questionable at best as Code Vein doesn’t save as often as it should. For example, we defeated a boss, watched a long cutscene, went back to base, interacted with a couple of NPCs, exited and came back to an unsaved game. There’s nothing more infuriating than losing progress, especially in a game that prides itself on challenging boss fights (which again, thankfully most aren’t all that bad). Better yet, the game crashed at least twice on us shortly after two separate boss fights, only adding to the frustration. Mind you, for the former occurrence, we didn’t use the return to title screen and save option in the menu, but one would expect an auto-save immediately after a boss fight or a lengthy cutscene.

If there’s one aspect that stands out the the most it’s the art design. Code Vein looks like an anime in video game form, at least in terms of the characters. I hate using the word fan-service in this regard, but that’s exactly what Bandai Namco has done as the vast majority of the female cast are well endowed and show quite a bit of skin. You can take it for what it is, but it can get distracting at times. The environments are bleak and full of destruction, but a little more realistic in comparison. They offer a surprising amount of variety, from the beautiful snowy mountains to the disgusting swamps. There’s a strong amount of variety even though the largest area in the game, the Cathedral, lacks a diversity of design and lightning, making it boring to look at. From a technical standpoint, there are some hiccups in terms of texture streaming, at least on the console we’ve played it on. Transitioning between each location is also clear as the frame rate will drop like a rock in these areas, presumably having the assets loading in the background. It’s a sacrifice to have a seamless world, but at the same time, these caverns generally feel longer than the load times themselves. Overall, the visuals contain a strong variety in the environments and an overemphasis on character designs, but I do wish there were more enemy types. 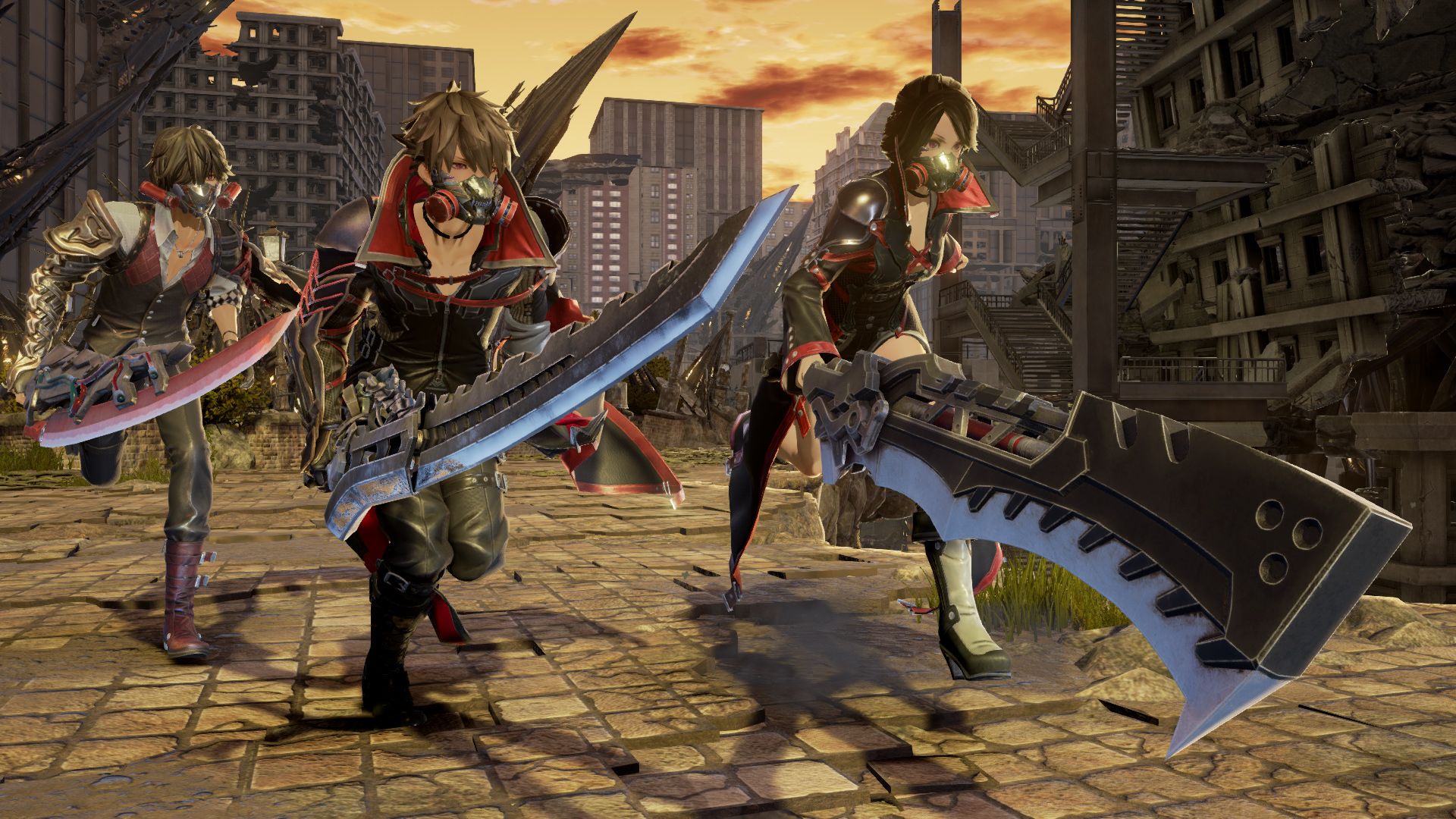 I’m of two minds when it comes to Code Vein. On one hand, it’s a serviceable and surprisingly delightful Souls-like game that comes with its own flair. On the other hand, the story, combat, difficulty, visuals and world all suffer from a variety of issues. The mechanics are far from refined in comparison to other action RPGs on the market, but thanks to the Blood Codes, it allows for plenty of experimentation without any sacrifice. The average story is well represented through a plethora of cutscenes and even has alternate scenario outcomes based on your exploration efforts, even though it brings with it numerous anime tropes and long drawn out scenes. There’s a broad number of locations to visit with their own creative designs, but their size and complexity are inconsistent. There’s so much holding Code Vein back, yet I felt entranced and excited to continue playing all the way through. While it will continue to live in the shadow of Souls games, it doesn’t mean that it’s some cheap knockoff, as the number of distinctions allows for it to differentiate itself from the herd.