Over the last few years, Inti Creates has started to make a big name for themselves on their original published titles. Blaster Master Zero, Dragon Marked for Death and of course the Gunvolt series helped put them on the map moreso than ever before. The Gunvolt series started back in 2014 on the 3DS where it gained a moderate following and was recognized for its wonderful visuals and fun play style. Gunvolt Chronicles is the latest in the franchise and moves from the previous protagonist Gunvolt in favor of Copen, also known as the Luminous Avenger iX. While the key protagonist has changed, the gameplay and style of Gunvolt Chronicles has stayed true in many ways.

In the world of Gunvolt there are many people in the world known as Adepts who possess special powers known as Septimas. Not everyone is blessed with these powers and those who aren’t are being actively hunted down by an organization known as the Sumeragi. Copen has become the savior of the Minos, or people without Septimas, and is known as the Luminous Avenger iX who defends them. On his path to defeat Sumeragi, Copen meets one of their subordinates known as Blade who bests him in a fight. When just about to be defeated, a young girl saves his life in the nick of time and takes him back to her hideout. Here he meets a group of young children who are all Minos trying to survive being killed by the Sumeragi. Copen decides to make their hideout his base of operations,and promises to do everything in his power to keep them safe while taking down the Sumeragi who stand in his way.

One of the big draws of Gunvolt is its combat and variety. It’s very much a run and gun style of gameplay, but with one unique gimmick being the characters’ ability to lock on. In Copen’s case, he needs to dash into an enemy to lock on to them and is then able to fire freely while all the bullets automatically lock on. Copen is able to dash freely when on the ground, but his specialty is being able to dash while airborne and even reflect off of walls or enemies to get through a stage faster. The catch is he’s unable to dash in the air if he doesn’t have any bullits. Bullits are showcased in the bottom left of the screen and Copen only starts with three at the very beginning. These Bullits are what allow Copen to both air dash and prevent him from taking damage. Taking a hit from an enemy will eat away at his Bullits, and he will begin to take damage once they’re gone. They can be replenished over time or manually all at once. Bullits are key to fighting bosses and progressing through stages quickly, so making sure Copen stays on top of it is important. 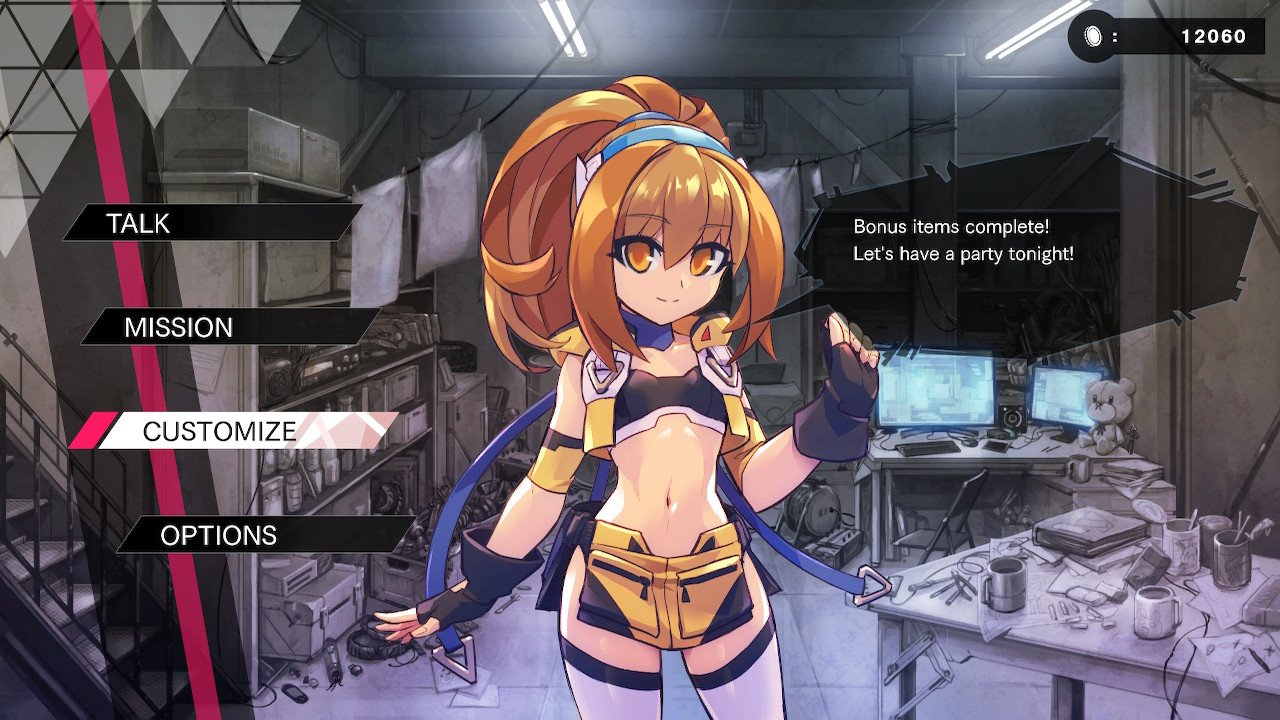 Although his main way of attacking is dashing and shooting, that isn’t the only power at Copen’s disposal. Copen works alongside his AI partner known as Lola. She allows Copen the use of many other abilities he earns along the way, such as his EX Weapons and special ability. EX Weapons are obtained by defeating other Septima users, which in turn allows him to use some of their attacks in combat. EX Weapons do require energy to use, but this refills quickly over time. They can also be swapped through at any time using the shoulder buttons or registered to the right analog stick for quick access. EX Weapons are also extremely important when fighting bosses and they will likely have a weakness to one he’s obtained or will later obtain in order to drain their health faster. Lola also has a special ability she can also perform with Copen, but it must be charged up through combat. Once unleashed it will deal a good chunk of damage, making it especially useful on bosses or if stuck against a challenging wave of enemies.

Much like previous Gunvolt titles, action sequences are split up into missions. Missions are unlocked by progressing the story and can be completed in any order once available. Defeating a stage will have Copen ranked on his score and time, with the best way to rack up score being to avoid getting damaged while comboing enemies by dashing into them. Replayability is one of the major elements in Gunvolt, as trying to beat records and get high scores is a great challenge that may just be worth completing. Most missions will also contain four bonus collectible tokens. Collecting all of these or gaining a certain combo score will automatically put Copen into his anthem mode with Lola, where his bullits will not decrease unless he’s hit making him a force to be reckoned with. 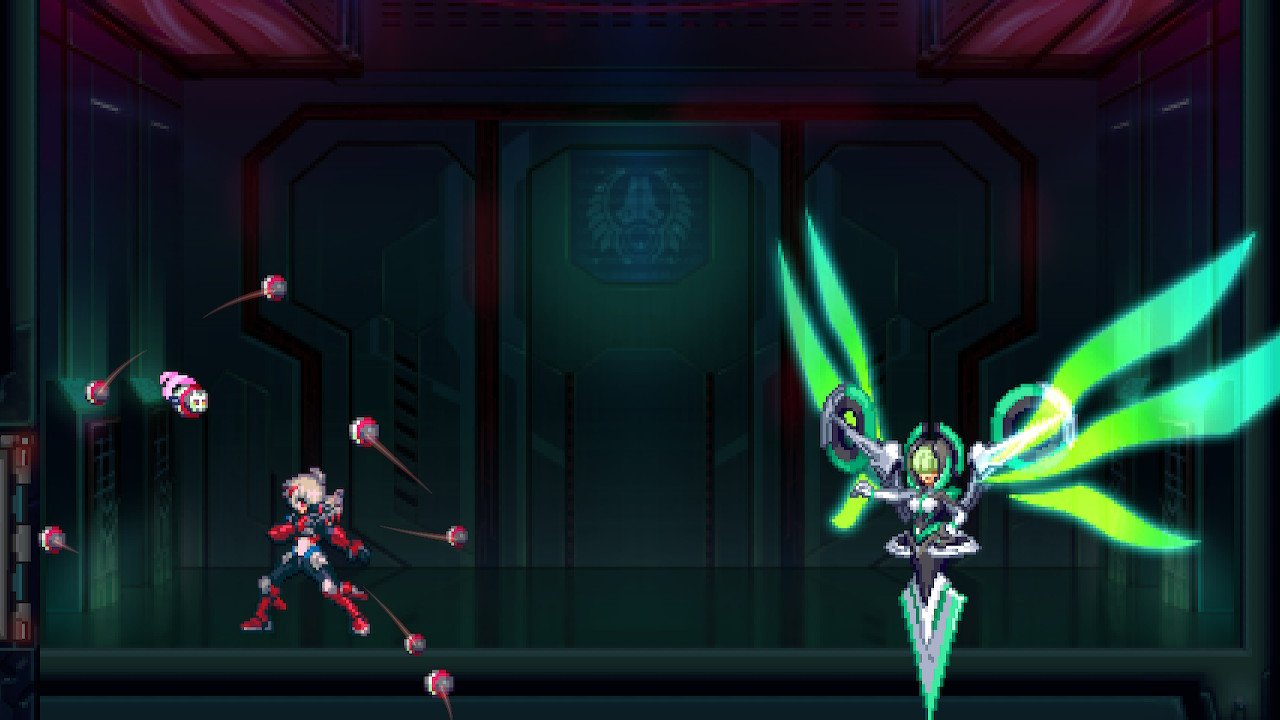 Gunvolt Chronicles is not a necessarily a long title, as the story can be easily finished in just a short sitting, but what it lacks in story length it makes up for in massive amounts of replayability and post-story content. There’s tons of reason to visit missions whether players would like to get a better score, grab collectibles or just replay their favorite. A store offers optional abilities where Copen can both improve himself or make his time more challenging. Both positive and negative add-ons can be toggled at any time for an easy way to make any kind of adventure for Copen. Although the third title in the series, playing the previous two isn’t necessary to fully enjoy the story although it does help fill in some history. Perhaps the one drawback for Gunvolt Chronicles is that it doesn’t have a strong tutorial and those unfamiliar might be confused on all of the controls. Fortunately all the controls are listed in the configuration menu and almost every button can even be fully modified to fit any player’s style.

The art style of Gunvolt is a mix of beautifully-detailed backgrounds and pixelated characters. Each design is memorable from enemies to allies. Combat itself feels fantastic and smooth, with Copen’s move set allowing for some creative movement across each stage. The soundtrack is fantastic, never feeling out of place and just right in each stage or while in-between missions. Cutscenes are few and far between, but this keeps getting to the action much quicker. It would be nice if all cutscenes had character names present over the text box since the spoken dialogue is entirely in Japanese, it’s occasionally confusing to determine which character is talking. 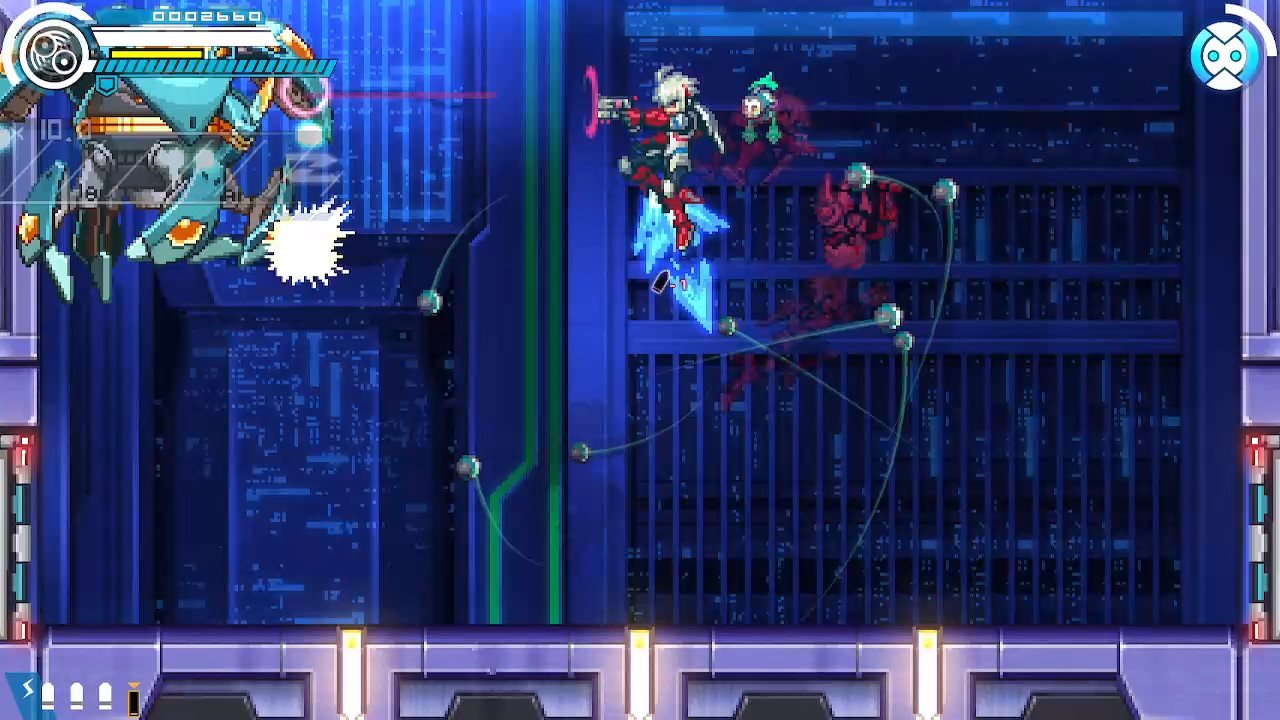 Copen was originally featured as a playable character in Azure Striker Gunvolt 2, but being given his own title has made him shine amazingly. His moveset is fully fleshed out, making him feel even more fluid to play with than before. The replayability in this title is near endless, and with missions being so short it makes them fun to dive into over and over while trying to perfect navigation and get the best score possible. There’s tons of ways to challenge different stages and lots of experimentation with weapons to figure out what works best. Anyone looking for a fast-paced run and gun title to traverse through shouldn’t pass up on Gunvolt Chronicles: Luminous Avenger iX as it’s well worth anyone’s time.