Waves NX 3D Audio has been a rising trend in game headsets this past year, so it should come as no surprise that Turtle Beach decided to ride the 3D audio wave. The Elite Atlas Aero is Turtle Beach’s newest headset which combines Waves NX technology with the features Turtle Beach has become known for. The Elite Atlas Aero is a wireless PC headset but can be used with any platform that supports 3.5 mm input, although certain features will not be available in wired mode. The bulk of the review will be focused on its wireless PC mode, which is really what sets this headset apart.

For the uninitiated, the Elite Atlas Aero boasts many features that are standard on Turtle Beach’s higher-end products. These include 50mm Nanoclear speakers, a high sensitivity noise-cancelling removable microphone with TruSpeak technology, Superhuman Hearing and independent game audio and chat controls. Features like Dynamic Chat Boost increase chat volume at louder portions of gameplay so there is no communication break and remappable on-ear controls make it easy to set up your preferred control system for real time adjustments. The durable metal frame is designed to withstand the hazards of travel. This headset is optimized for comfort over extended playing with cooling gel-infused memory foam ear cushions and the proprietary ProSpecs Glasses Relief System so this headset can be worn with comfort with any pair of glasses. The battery can last about thirty hours on a single charge so having to stop and recharge in a gaming session isn’t a major concern. 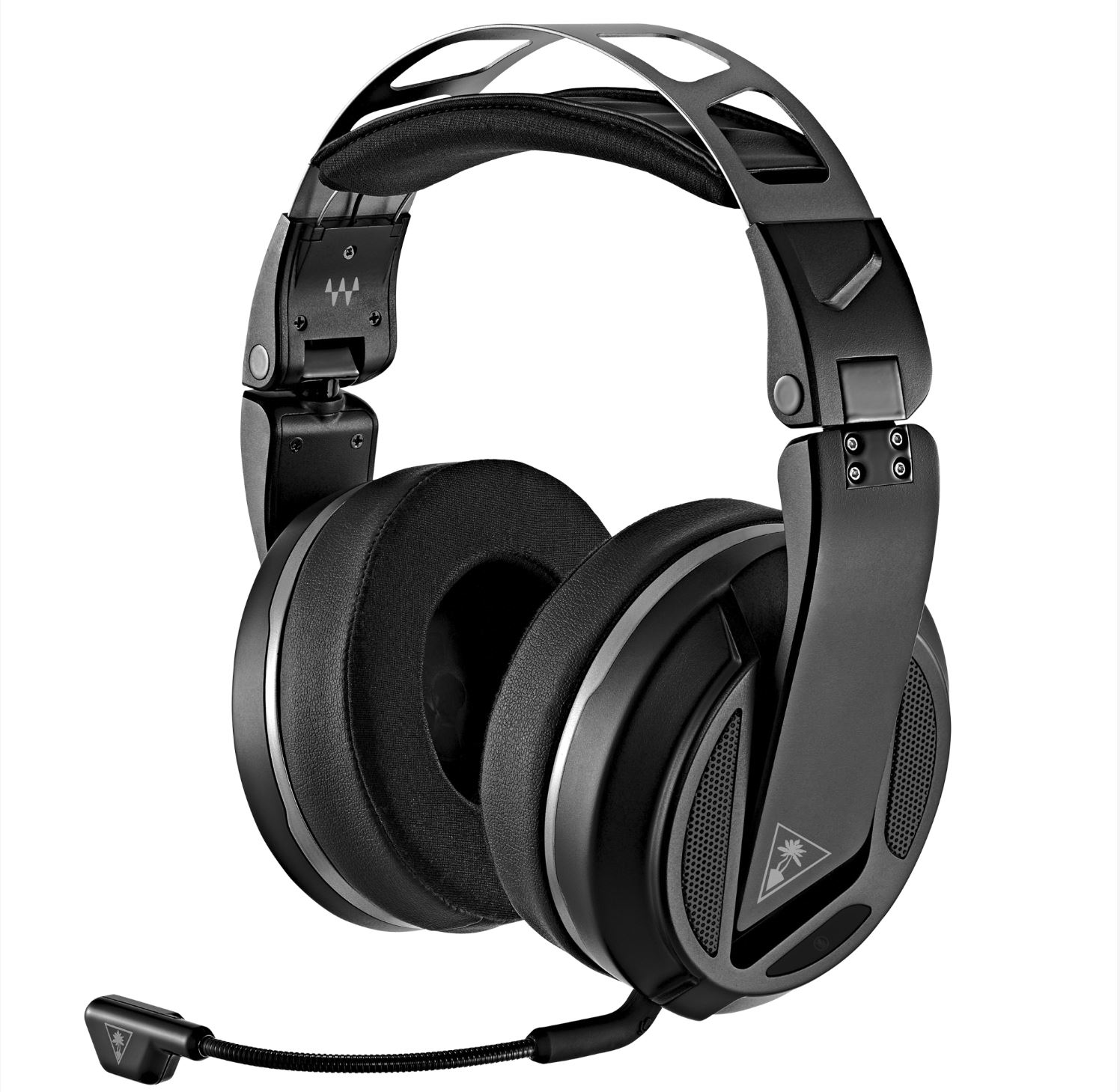 This isn’t the first Waves NX 3D Audio headset Hardcore Gamer has checked out but this is the first time Turtle Beach is using the technology. To steal from myself from another article with an analogy I stole from someone else, Waves NX 3D Audio is to your ears what a virtual reality headset is your eyes. In gaming, the sound will come from its relative point of origin to the player, so if there is a threat to the player’s rear right flank that is where the sound will originate and follow the player’s movement, such as moving to in front of the player when they do an about face to eliminate said threat. The feature is primarily designed for gaming but does have some interesting applications with movies and music.

It is recommended that users download the Turtle Beach Control Studio to maximize their experience with the Elite Atlas Aero. This is a convenient hub to adjust the EQ using preset configurations of customize your own mix. This also has controls for Superhuman Hearing and Waves NX. Something cool about this app is the different setting for Superhuman Hearing, such as emphasizing bullets or footsteps depending on which might be more useful in a particular game. Having Waves NX and Superhuman Hearing on at the same time does create quite the immersive environment and can give an edge at enemy location in games. 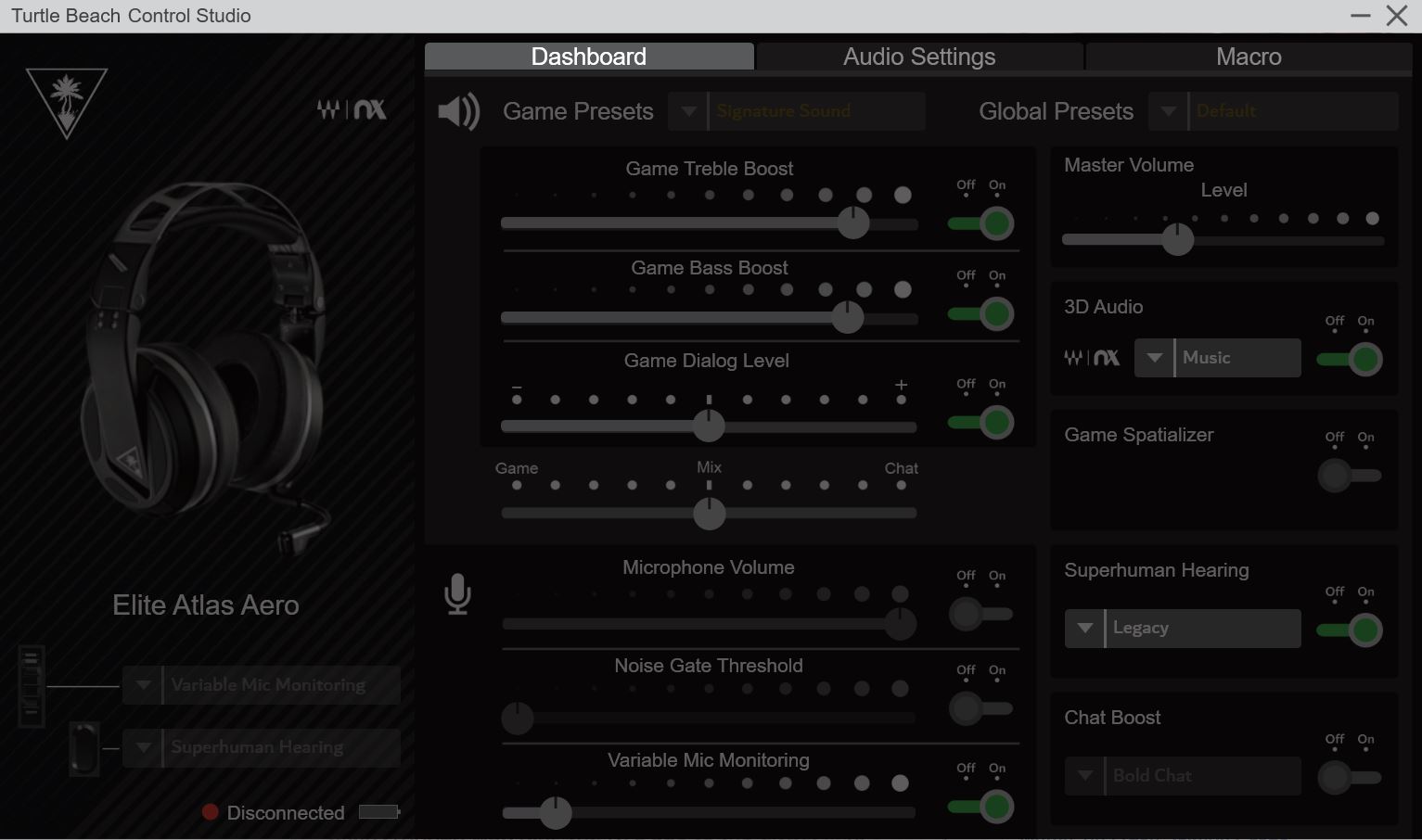 The Elite Atlas Aero is specifically a wireless PC headset. It connects to the computer through a USB dongle that can be stored in the right earcuff in a compartment under the memory foam cushion. The sound quality is nothing short of amazing, and with the Control Studio app the user has the freedom to customize the mix to suit their own personal tastes. 3D Audio and Superhuman Hearing have always provided an edge in competitive gaming on their own but combined the result is being able to hear exactly where more subtle noises are originating. The Dynamic Chat Boost is a useful feature when things get chaotic and works well even when surrounded by the walls of sound created by the immersive nature of this headset’s sound delivery. For PC gaming (and PC movies and music as well) the Elite Atlas Aero is going to be a tough wireless headset to beat at the price point, and currently one of the more inexpensive 3D Audio headsets on the market.

The Elite Atlas Aero does work in a wired mode with anything with a 3.5mm input. The downsides to this are the Control Studio software, noise cancelling  microphone and other active features such as Waves NX are not supported on these platforms. There is an inline mic on the 3.5mm cable that can be used for chat. What you’re left with is a headset that has good sound quality but not on the level you’d get with the PC and mixing software. With that in mind, this headset would only really be recommended for PC gamers, but having it available for headphones for console games on other platforms or other devices isn’t a bad secondary use for it. 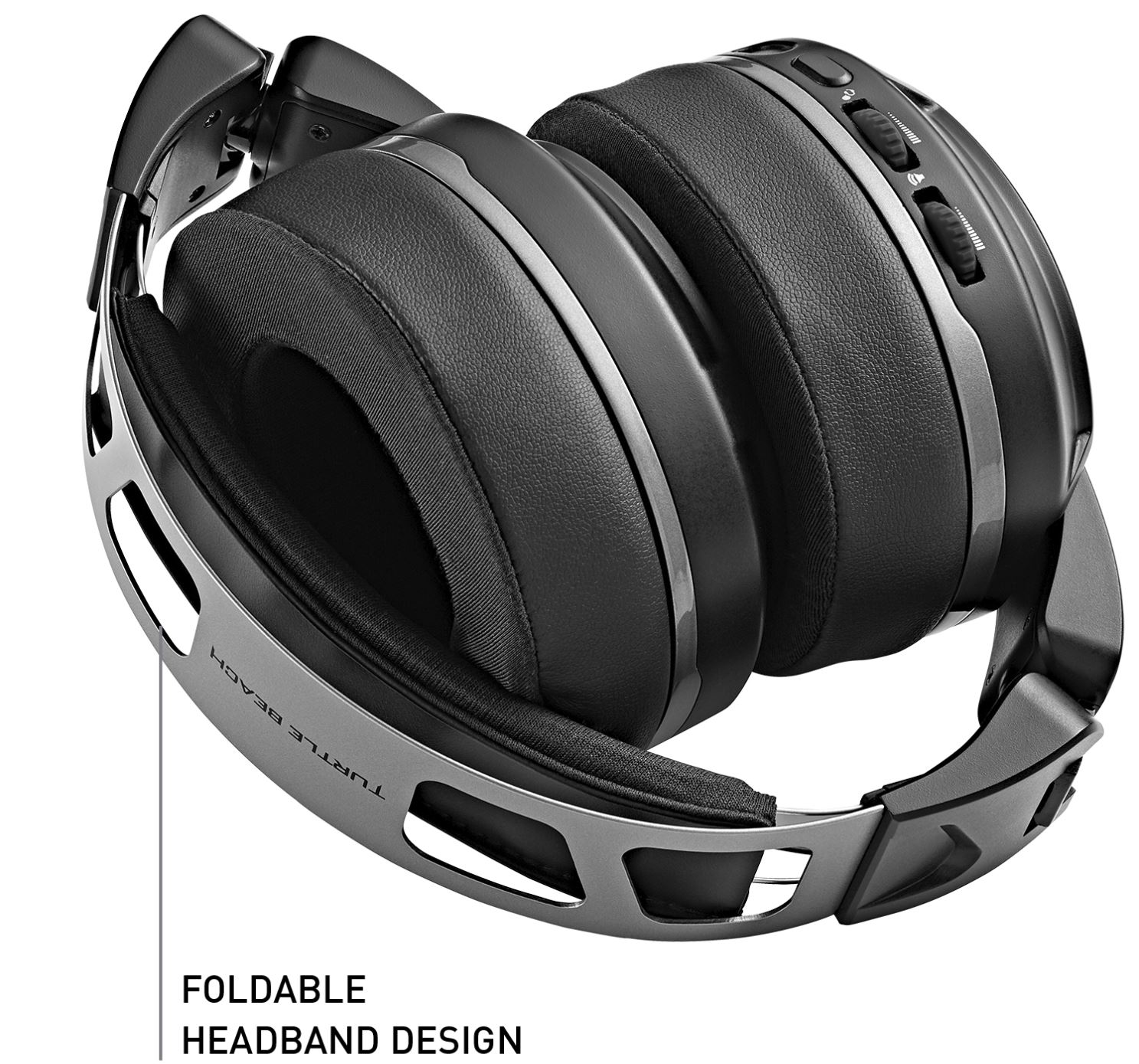 On PC the Elite Atlas Aero excels as a gaming headset, and with the MSRP of $149.95 it’s a relatively affordable entry point into 3D audio. The functionality is more limited on consoles, but having the option for a secondary use as a no frills headset for other platforms is an added value. The addition of 3D and the Control Studio to familiar Turtle Beach features make this the current front runner of Turtle Beach’s products I would recommend for PC gaming. The 3D audio and Superhuman Hearing create an immersive gaming experience and can give the user an edge, but with the mixing software this is also a great headset for movies and music from the PC.