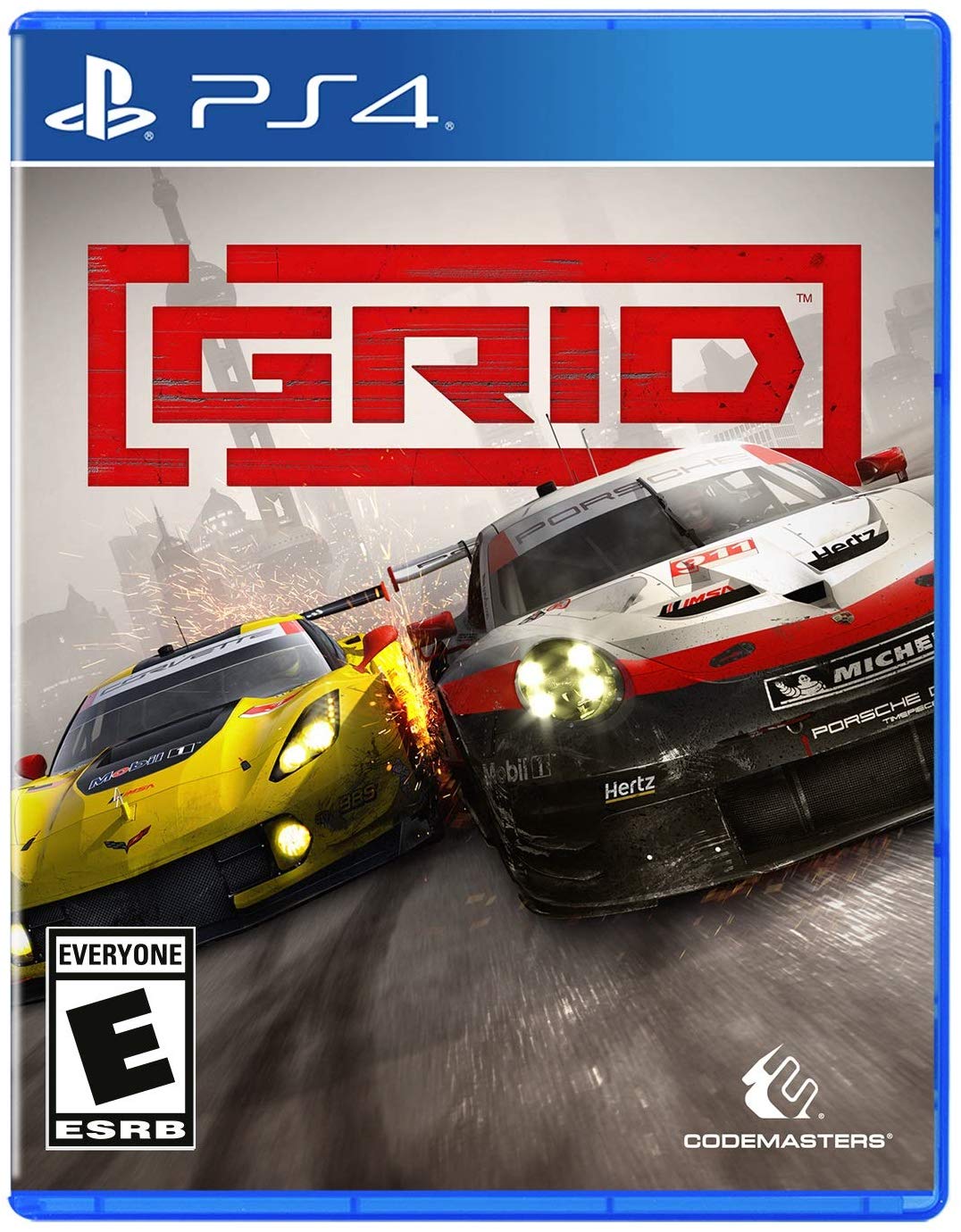 Codemasters has clearly had a focus on its Formula One and DiRT series of games this generation. One of its oldest series, GRID, has been ultimately left dormant for the past five years with no releases this generation. GRID actually dates back to the TOCA Racing Series games of the late 90’s as it has evolved into something completely different. The original GRID launched in 2008 and now Codemasters is looking to reboot the series with a game of the same name. This GRID takes what made the original game special and brought it to modern day. You never realized you missed GRID until you take the wheel again. There are a few design issues, however, that make it feel like GRID is still stuck in the past.

What GRID focuses on is a blend of simulation and arcade racing aspects. Arcade racers such as the Forza Horizon series and The Crew have tried to expand the genre by going open world. Codemasters laid out a big fat no on this as GRID continues its traditional GRID World Series setup. To be more precise, GRID takes the simulation aspects of racing and exaggerates them. The handling model has been rebuilt for the newest game, but it’s geared more towards the original game. The focus of the racing is on controlling the immense raw power of fast cars from different genres. Drifting is key but it isn’t easy as the tires on the cars feel like they lack grip so getting them sideways to go through corners while maintaining speed is the key to winning. While there are variable degrees of assists to help ease the difficulty, the best way to experience GRID is with the assists off. It’s a marvelous balance of gameplay that isn’t duplicated by any other racing game. The best way to describe GRID is that someone took the aspects of racing and wrote a Hollywood script for it.

Players will be able to setup their cars to their liking as it’s fairly simple and straightforward. There are enough options to vary some differing feel when racing and this will also vary based on the car. As for cars, GRID features sixty cars that spread across multiple classes and ages. These can range from a Plymouth Hemi Cuda and a Ford GT40 to a Porsche 911 GT4 and McLaren M8D. The game has also included stock cars and stock trucks, although there are no manufacturers behind those. The results are a wide variety of fan favorite cars from over the ages that any car nut will drool over. If you happened to purchase the Ultimate Edition, there will be more cars and tracks down the road as well. Each car has a variety of liveries to choose from or players are free to paint whatever they’d like. To get a better idea, the car classes include Touring, GT, Tuners, Stock and Protoype. 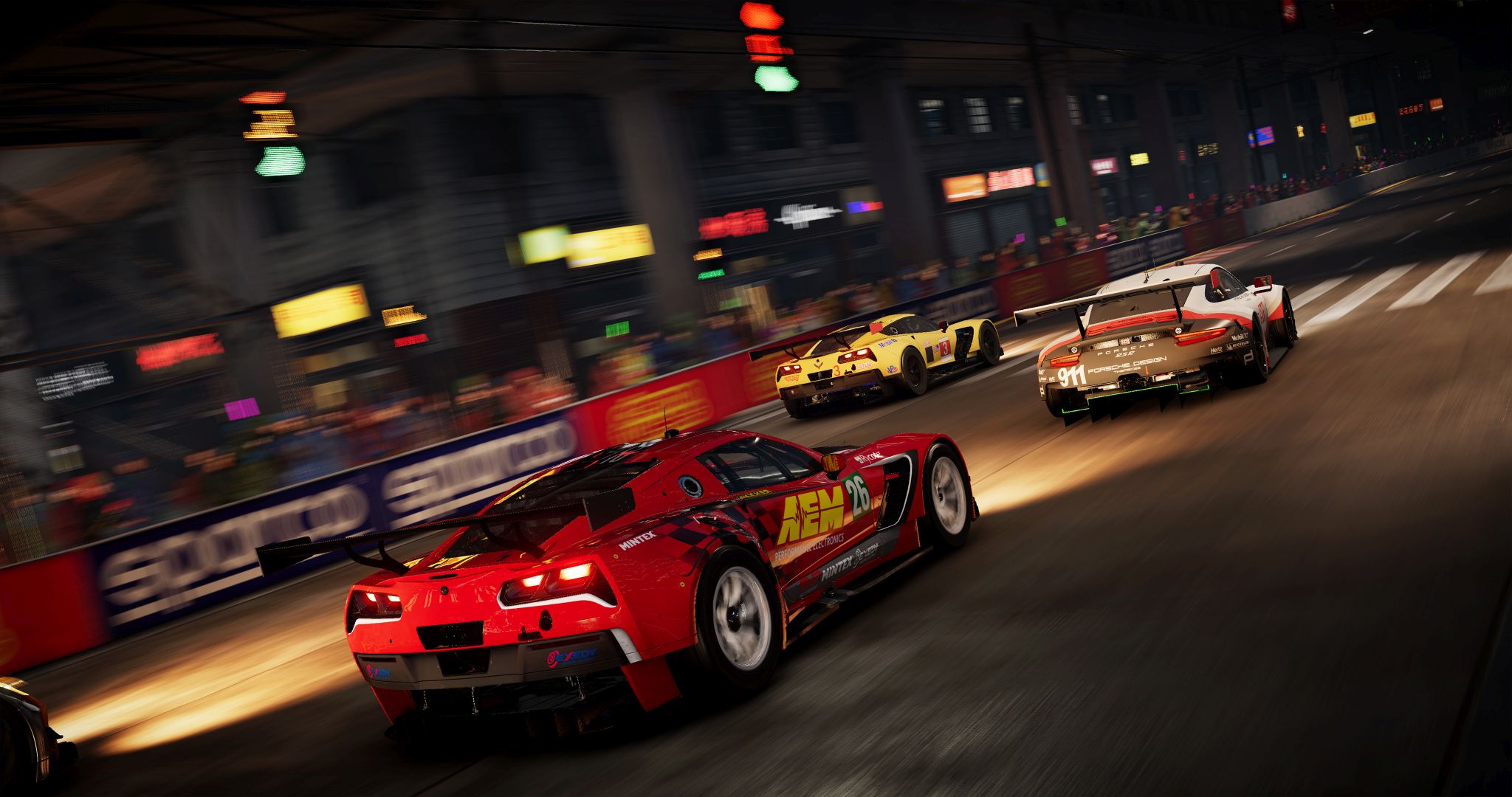 Another huge addition is the inclusion of the game’s consultant Fernando Alonso. A world champion driver across many sports, Fernando Alonso has a maxed-out profile in the game. You will race against him at times, especially in multiplayer if the field needs to be filled out. The AI is something that Codemasters has went outside the box with dating back to the original game. The Nemesis system returns and preys on the bumping and rubbing that GRID’s racing offers. Contact with other vehicles is a thing of enjoyment as metal smashes metal and the damage can be seen after the race. GRID features 400 different AI drivers each with varying ability levels and personalities. Anger another driver enough and they will come gunning for you. Codemasters hopes to create drama with this but it only sticks with one race even in career. You will see the AI get aggressive towards one another but these individual battles can hamper the racing experience. The AI will bunch up to a snails pace through corners as every car seems able to stop on a dime and accelerate with no issues. This makes it hard to pass and navigating through traffic is a frustrating experience especially on a narrow track. There are times where you simply won’t catch the lead car or you’ll blow away the competition. It’s hard to say if its rubberbanding or not, but it just lacks consistency. The pacing issues don’t resolve themselves when you take on higher level opposing drivers either.

The Career Mode consists of 104 events that span a combination of 12 real world cities and real world circuits. GRID even includes Indianapolis Motor Speedway along with Silverstone, Brands Hatch and Malaysia. The city circuits include the likes of Havana, San Francisco and Shanghai to name a few. The city circuits are extremely narrow and can be a bit hard to see down the track due to the sense of speed the game has. Track memorization is a must and the game also includes not only night racing but wet weather racing that changes how the car handles. It offers quite a bit of varying racing experiences to try and keep things fresh even though the game is limited in its game modes. Players will grind through the Career Mode race series after race series just to get to the GRID World Series event. Invitational Events exist, as well, to throw a couple of change ups in there. Players can chain together combos in races that earn XP points to level up their driver while unlocking badges. The varying race experiences mask the redundant grind as players will win money to buy the other cars and these purchases do carry over to the limited multiplayer that is there. Outside of that, there is a free race mode where players can customize a race. 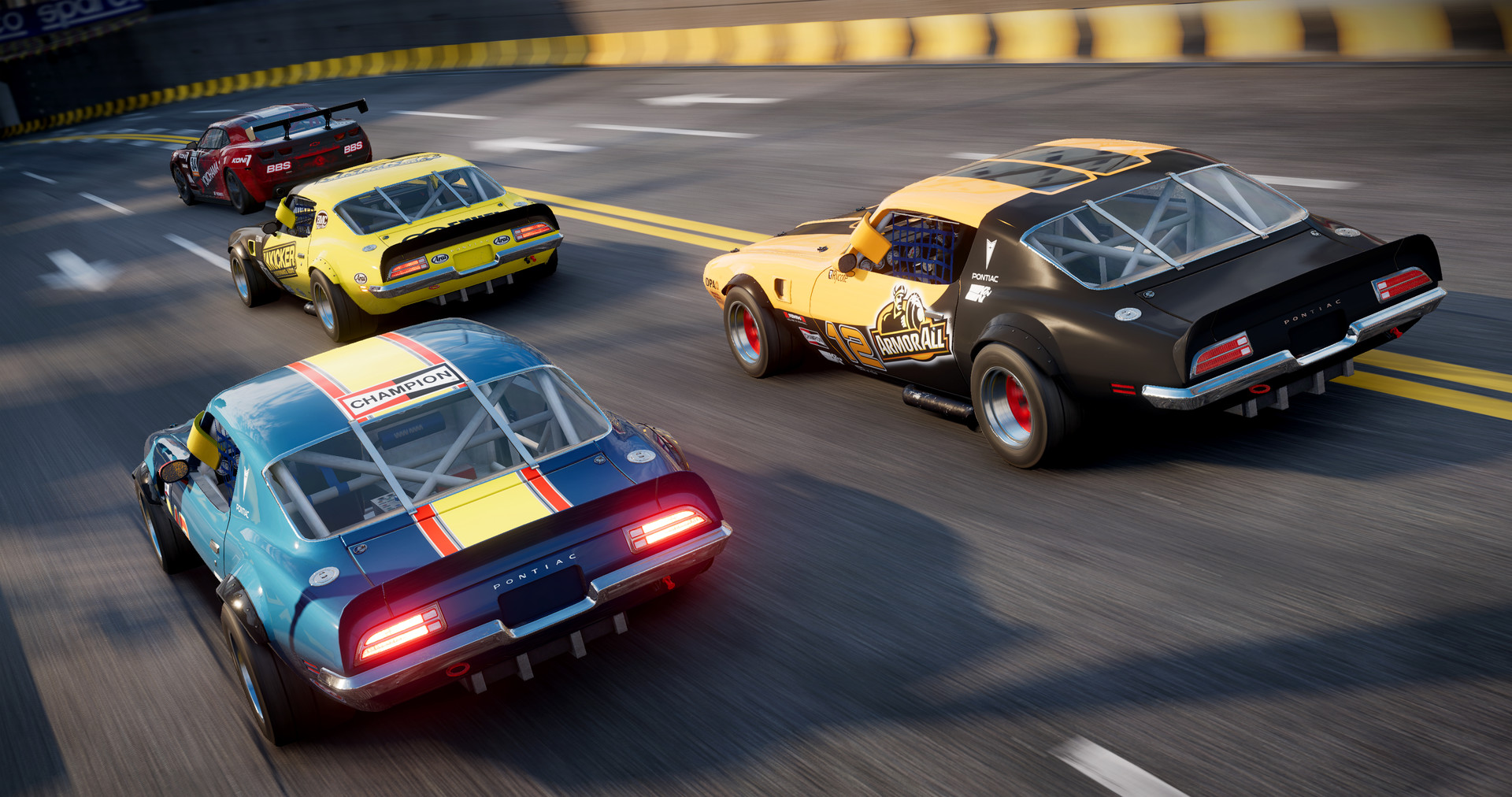 While the car selection and handling physics truly shine in GRID, the visuals sit atop the podium. Using Codemasters’ EGO Engine 3.0, the best and brightest aspect of the visuals are the lighting. The way the sun hits the track or the city lights at night from skyscrapers in the background, GRID is truly a game to marvel at in motion. For the most part, GRID runs at 60 FPS with some dynamic drops when a ton of action mixed with rain is occurring at once. These drops are few and far between and while the sense of speed on the track may not fall off, it seems the surrounding area might. There is some magic at work here to achieve this 60 FPS as players may notice trees in the distance or the grass look pixelated, but it’s not crippling. The cars look mostly fantastic and the cockpit views are spot on. The damage details are as fantastic as you remember. Bumpers and hoods will fall off while dents and scrapes are visually gratifying. When players work for a race, they’ll see the results. The sense of speed in GRID is simply fantastic and it’s more noticeable within the car. There’s no question that Codemasters can properly replicate the sound of cars in racing games. While the sound from the cars in Formula One have fallen off in recent years, Codemasters has done a great job with those and an even better job on the historic cars in those games. Then there’s the blaring sounds from the rally cars in the DiRT series, which has gone mostly unmatched. That is until now. Simply put, there are no better sounding cars in any racing game than there is in GRID. No matter the engine or the type of car, these sounds are so glorious that you don’t need an in-race soundtrack. That would just be the machines themselves. Sure the cars basically backfire after every shift and those goes back to that exaggeration, but it creates such an immense feeling of immersion that completely encapsulates the entire racing experience.

The one elephant in the room in this game is the multiplayer. Players have the choice between a quick online match and setting up private matches. There are no lobbies and if the room is empty, you’ll be sitting in that room by yourself. You won’t know who’s in the room until after it loads in. You also have no choice about the type of race and will either need to buy a car or get a loaner to compete in the race. This is all controlled by who’s the room’s host, but that all comes down to seniority in the room if they decide to leave. In between races, players can enter a destruction derby to pass the time known as Skirmish. As for the online racing itself, there are some issues and this was with limited capacity rooms. The AI will fill out the field if needed, but lag is an issue with opposing cars. There are times where cars down the track would just disappear for a second then reappear. There were no issues with how my car responded, but this may get worse at launch as rooms get more full. There is more that could have been expanded on with multiplayer. 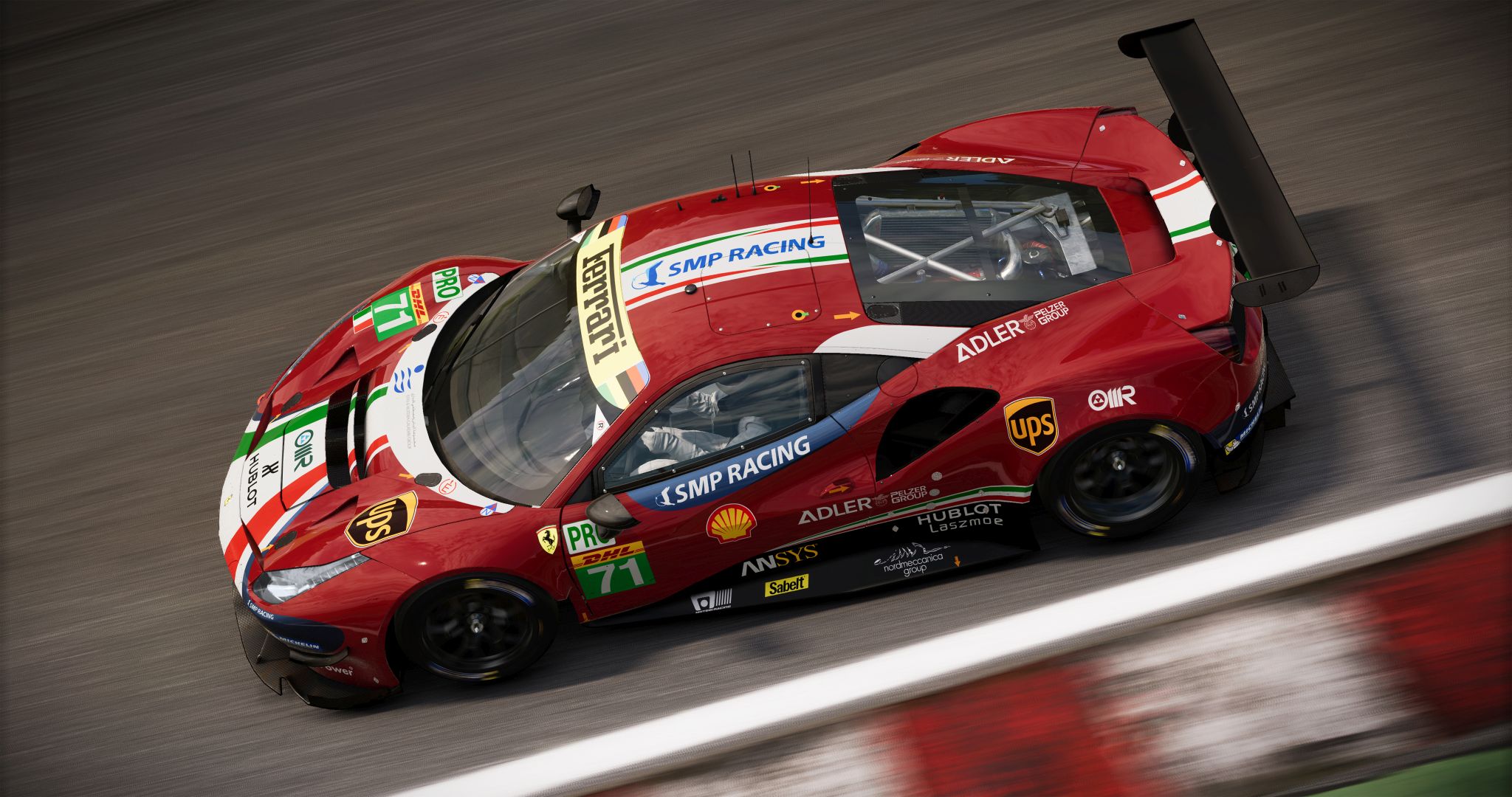 What this reboot of the GRID franchise does well, it does really well. Stunning visuals with great car models and lighting mixed with a 60 FPS experience and an excellent sense of speed goes almost unrivaled. The engine sounds are an orchestra to car enthusiasts’ ears and the handling engine is the perfect blend of arcade and simulation. These aspects of the game feel up to date, but while I respect the desire to keep the game mostly a single player experience and negate the open world flavor of recent arcade titles, most of the game outside of the racing feels like something that launched in 2008. The Nemesis system really hasn’t evolved and the AI is frustrating at times. Once the feel of the grind of the Career Mode begins, the initial appeal starts to wear off even though the varying race experiences try to hide it. The multiplayer experience is seemingly just an afterthought with something that could have had so much potential. But with beautiful visuals and impressive gameplay, fans of the original GRID will find that this modern version will suit them on the track.