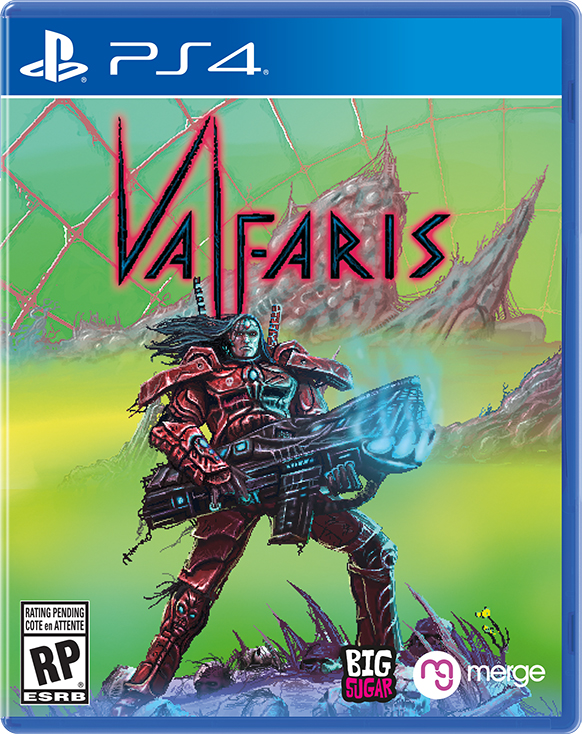 The space-fortress of Valfaris disappeared a few decades ago, slipping into darkness without a trace.  Those who remembered it were left with nothing but unanswered questions and no choice but to get on with their lives, until one day Valfaris returned as suddenly as it vanished.  The fortress was nothing like its old self, now little more than a breeding ground for darkness and the creatures that feed off the suffering it brings.  Dangerous as it is there are answers to be found in its ruined halls, and Therion is armed to the teeth and comfortable wreaking an endless stream of destruction on the creatures who oppose him.  There are mysteries deep in the fortress’ heart, but they’re nothing that can’t be solved with hot lead, plasma and a crunching guitar soundtrack.

Valfaris is a 2D run and gun heavy metal (music) Heavy Metal (magazine) platforming action-fest that would have been right at home on the Genesis or possibly Sega CD so Celtic Frost guitarist Curt Victor Bryant’s soundtrack wouldn’t have to be trimmed down to size.  The game has just enough narrative to get things moving and then gets out of the way so you can tear through an endless succession of freaks, mutations and bio-nightmares that are all more than capable of killing an overconfident warrior.  Valfaris is not an easy game but also rarely unfair and Therion always has the right tools to clear the most brutal hazards if only you can use them right.

The two main weapons in Therion’s arsenal are a pistol and sword, but there’s also a secondary heavy gun plus a shield to guard against incoming fire.  The pistol and sword can be used as much as you like and will do the bulk of the killing along the way, while the heavy gun and shield feed off an energy meter.  All the systems tie together neatly, though, and that meter is there to be constantly used rather than hoarded for a special occasion.  While killing an enemy with the pistol simply knocks it out of the way, cutting it down with the sword releases blue energy orbs to replenish the power supply. 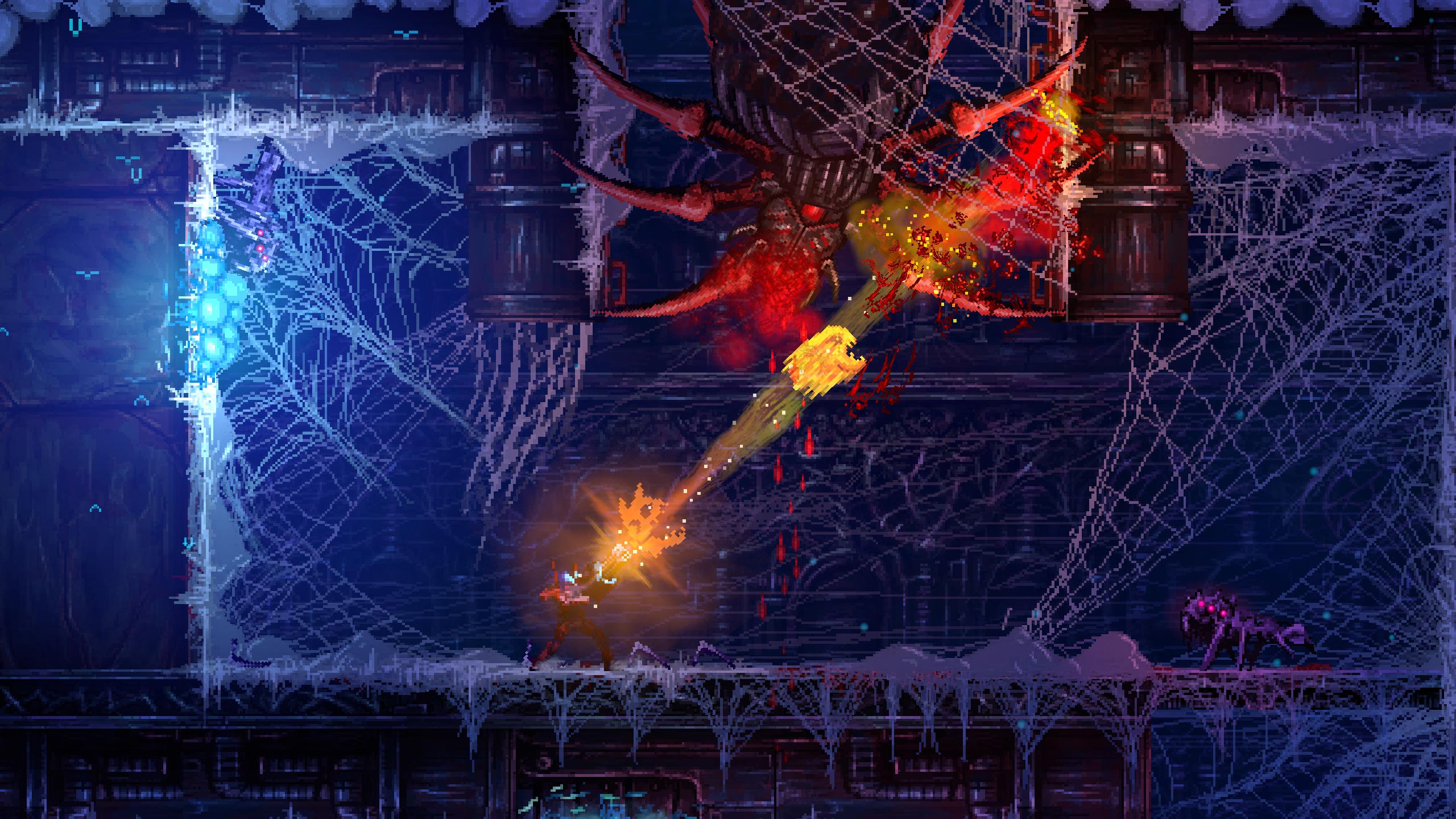 While the heavy gun is nice to clear out tougher beasts, the most common use for the energy meter is from the shield.  The shield blocks incoming fire, sure, but when timed correctly it catches the bullets and can send them back where they came from.  It doesn’t take long to start juggling the various tools, leaning on the sword for the less dangerous enemies while keeping the shield active to ward off projectiles, popping out the pistol when energy is full, and breaking out the big gun when you just want something to not be there any more.  Other than the twice-per-level boss fights it’s easy to keep the energy reserves high, making all combat options available at all times.

Which by no means makes Valfaris easy, of course.  Death is common and quick, and while most creatures don’t deal a huge amount of damage they still contribute to an empty health bar worryingly quickly.  Creatures attack from multiple sides, thorns and other environmental hazards litter the paths, and enemies change often enough that just as you nail the timing on one type another shows up with a different attack pattern.  It also doesn’t help survivability that Therion can’t move while the shield is active, so playing turtle simply isn’t an option.  The shield may be an excellent defense but Valfaris is about leaving a huge pile of monster corpses in your wake, dying and respawning until you can practically dance through the next section of the level. 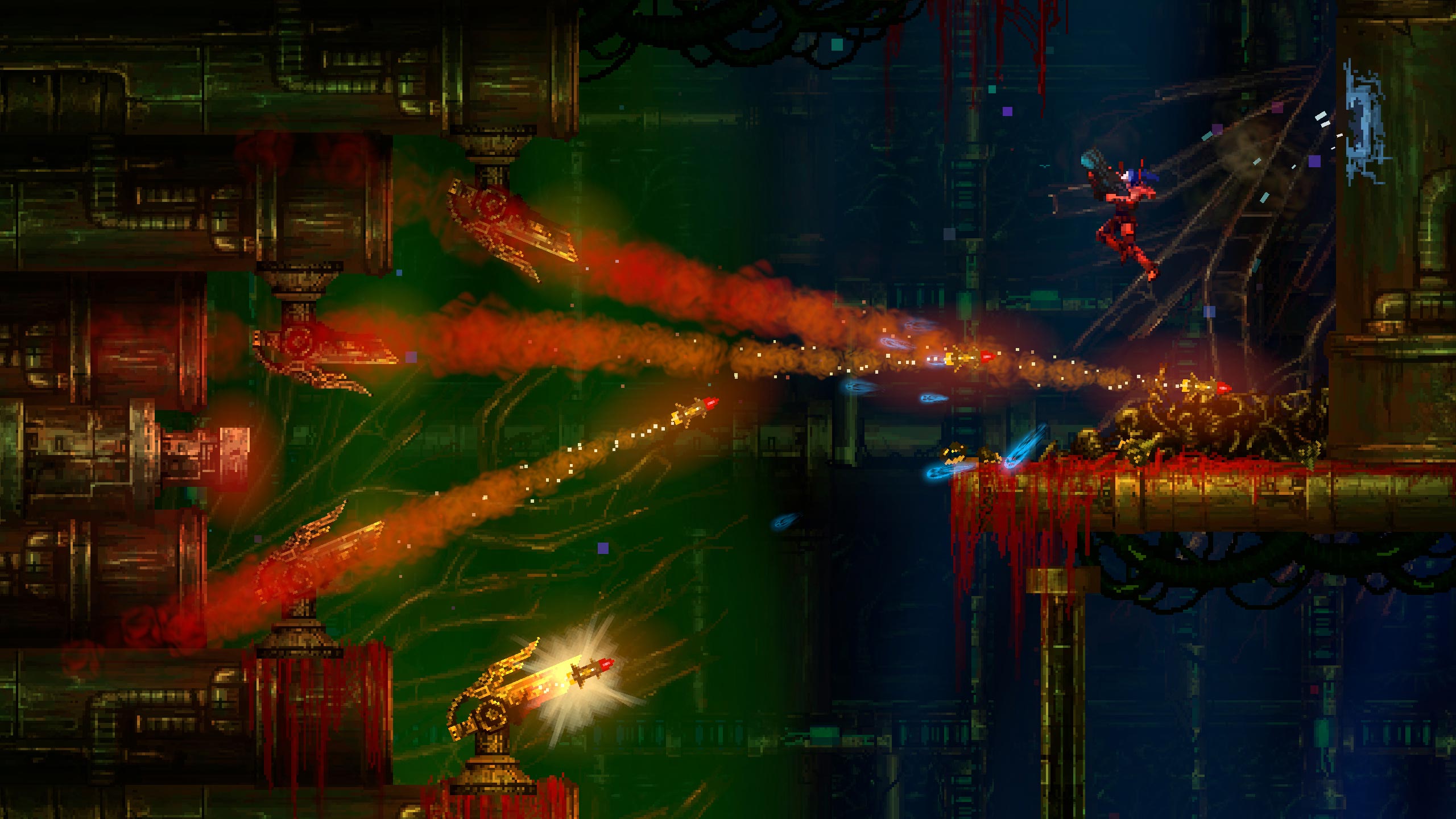 Checkpoints are scattered through each level a reasonable distance apart and while it’s possible to activate each one in turn there are rewards for pushing onwards.  Checkpoints are activated by spending a green icon and these are generally found hanging out in plain sight in each section.  Therion can only hold a set number of them, so there’s not a lot of point in trying to horde every single one and at the end of the level there’s a dispenser the icons can be spent at to buy valuable blood metal.  Blood metal is a rare pickup generally hidden in out-of-the-way areas and it’s used to power up Therion’s arsenal at the activated checkpoints.  Guns fire faster, the swords get more reach and everything packs a bigger punch as it levels up.  Which is nice, but also a bit problematic due to the way new weapons show up.

Going from a tier one to tier two weapon costs three blood metal, which isn’t too difficult to accumulate.  Leveling up to tier three costs an additional five, which is a little harder to get thanks to new guns and swords showing up on a semi-regular basis, and it only gets more expensive after that.  Experimenting with a new loadout is fun, of course, but is the rapid-fire pistol better than the wolf-gun?  Rapid fire puts out a lot of bullets quickly but wolf-pistol lets loose an energy stream that, on enemy death, also sends out a weak homing wolf-head projectile.  Obviously wolf-pistol is cooler and therefore better, but another pistol will show up next level that might be better than that, so it’s hard to justify spending the upgrade points.  The solution to this is new game plus mode, but that’s not coming to Valfaris until after release so can’t be part of this review.  The only practical solution for the moment is to choose a weapon and stick with it, which kind of defeats the purpose of all those lovely new toys of destruction found along the way. 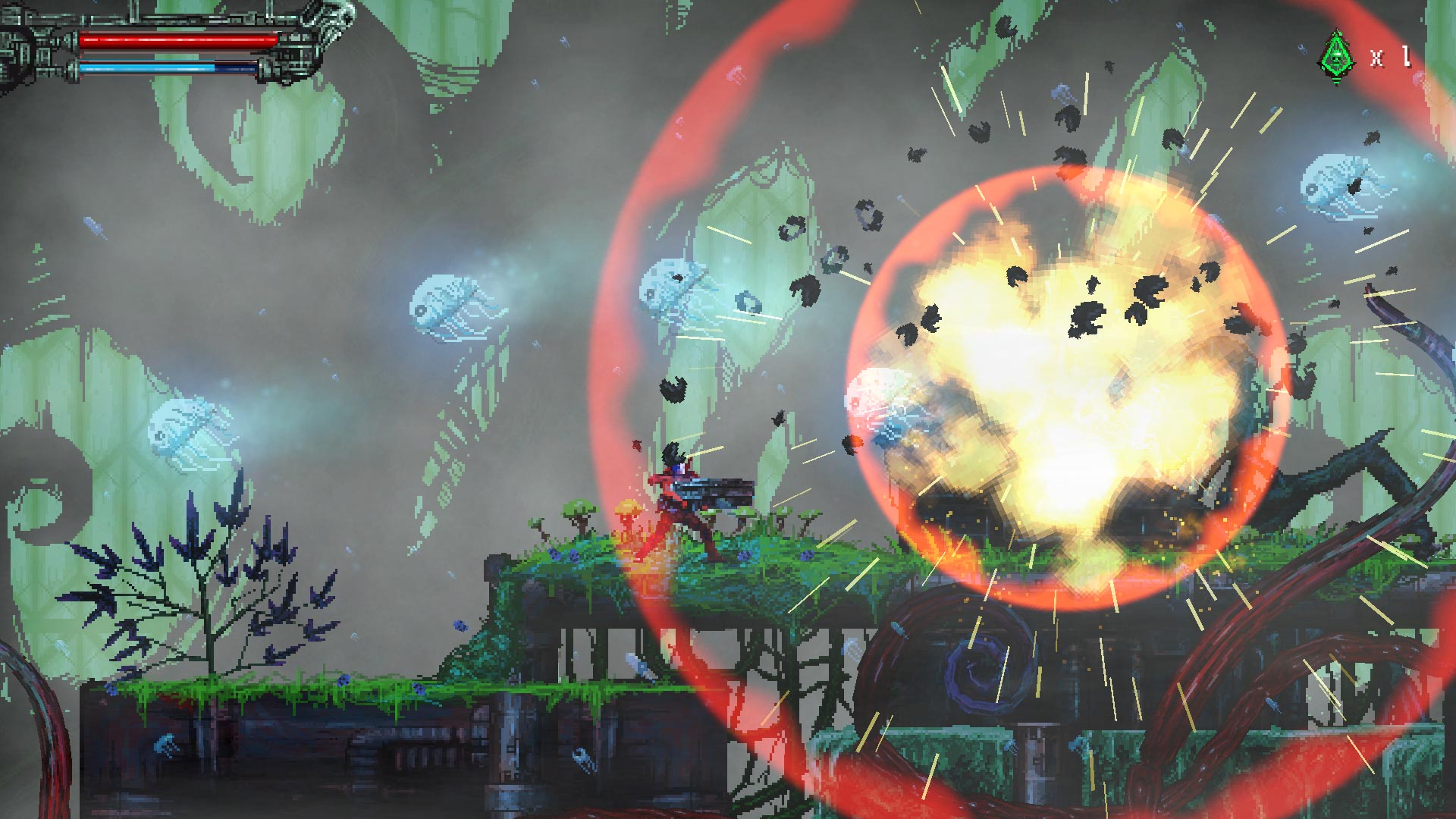 Valfaris is a dark, mean sci-fi trek through a corrupted landscape that can only be cleansed through fire.  Or firepower, at least, and with the right weaponry it can be both at the same time.  The large levels are stocked with a host of creatures ranging from small and swarming to large and vicious, and you’ll frequently have to deal with both at once.  Therion’s arsenal is nicely balanced to deal with the madness and the weapons are quick and responsive so each of the many deaths is theoretically preventable.  Most of all, though, Valfaris is pure badassery in every level, from its brutal environments, the monstrous abominations of its bosses and of course the driving guitar soundtrack pushing the action forwards.  It’s hardcore run & gun action from the very start and exactly what we dreamed 16-bit gaming would grow into back in the day.