Video game headsets will soon outnumber the grains of sand in the Sahara Desert, which is evidenced by the fact this is probably not the first time that feeble attempt at humor has appeared in a Hardcore Gamer headset review. Creative sent us a Sound BlasterX H6 to test out, which is a versatile 7.1 surround sound wired headset. This headset works with both USB and 3.5mm connection and is compatible with PC, Mac, PlayStation 4, Switch and Xbox One and has a MSRP of $79.99 which is on the lower end for surround sound headsets. The Sound BlasterX H6 is by design a value headset. It’s significantly less expensive than some other 7.1 headsets on the market and it will work with all current gen consoles along with PC and Mac. With that in mind there will not be all the bells and whistles that there would be on platform-specific headsets costing roughly twice as much but overall this is a good headset.

Some basic specs of the Sound BlasterX H6 include 50mm Neodymium drivers that can deliver loud audio with clarity, detachable noise-reducing ClearComms microphone, three EQ profiles, breathable and replaceable fabric earpads and customizable Aurora Reactive RGB Lighting. An audio enhancement that is available is Scout Mode, which is a sound setting that is designed to hear and locate your enemies before they hear you. This is similar to some other sound profiles we’ve seen in other headsets that are designed to elevate the player’s hearing beyond the realm of what the average person would normally pick up.

To maximize the potential of the Sound BlasterX H6 one needs to download the Sound Blaster Connect PC software. This is where the user can adjust elements such as stereo, 5.1 or 7.1 surround sound virtualization and features like Smart Volume or Scout Mode. The bass and treble can be adjusted between but this is done in a separate screen than some of the other settings. There are three EQ settings optimized for gaming, movies and music which can be quickly switched with the press of a headset button which can be done when the headset is not using this program. The interface for this software isn’t great but it gets the job done in tweaking the sound to the user’s personal preferences and there are enough options to play around with where the user can get their ideal mix. This is also where the controls for the RGB lighting, which for people who don’t care about that can opt to turn them off. For those that do care, there are a few different light cycle options that can span 16 million colors. 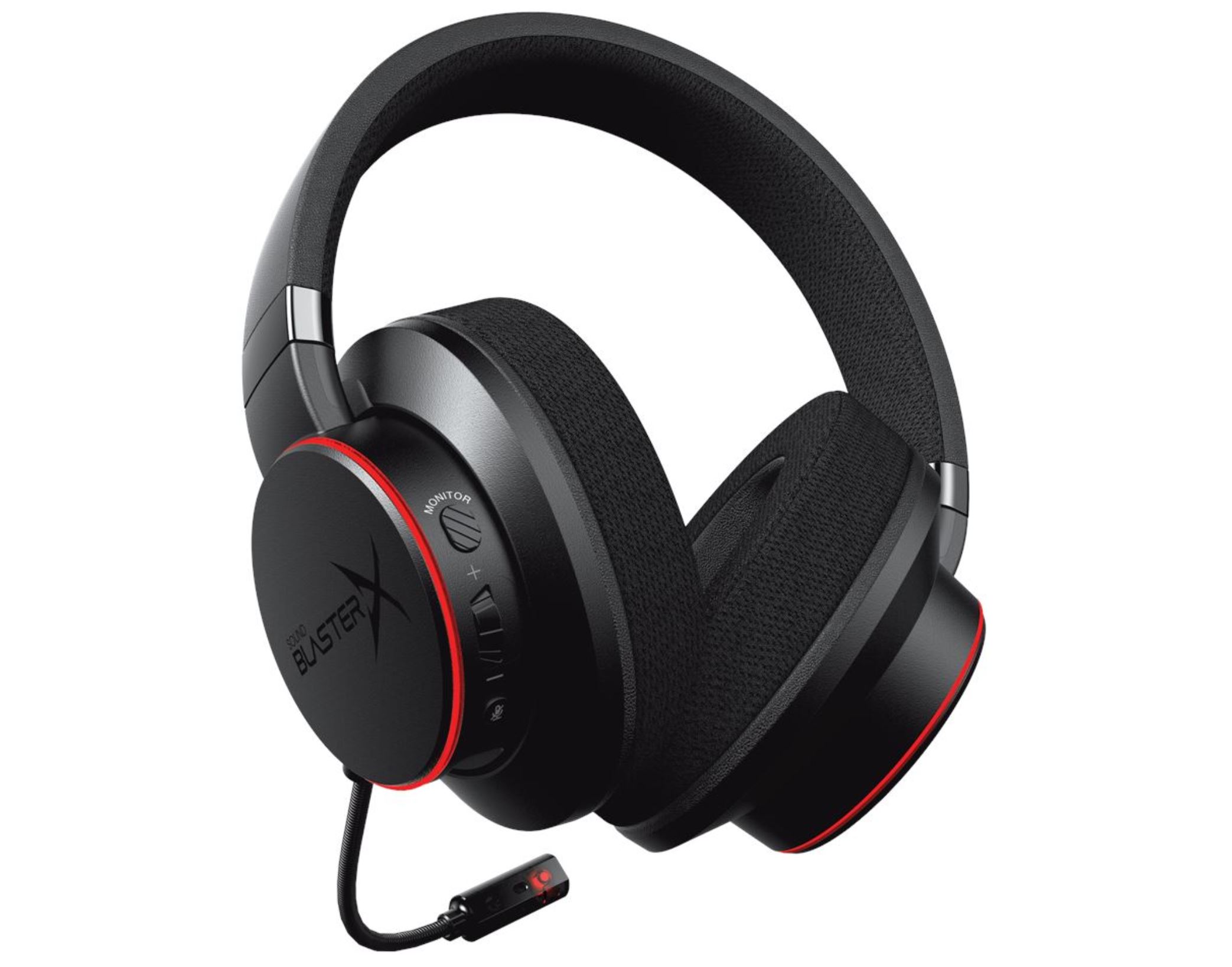 One feature that was particularly interesting was the Ambient Monitoring feature, which is a fancy way of saying mute button. It seems like a minor thing but if something is going on outside of the video game that warrants attention (it could happen) a press of the button on an earcuff silences the source audio until the button is pressed again. It’s a minor feature but it’s convenient if you’re one of those people who tends to have multiple tabs open at once and the audio source is going to take a second to find.

The measure of any gaming headset ultimately comes down to sound quality and communication ability. In this regard the Sound BlasterX H6 had no issues, there were no communication snafus in online play and the audio and chat sounds were balanced so communication wasn’t buried in the gameplay audio plus the immersive qualities of the 7.1 surround sound does provide a different experience in gaming than regular stereo sound. The overall sound quality of the Sound BlasterX H6 was better than anticipated based on the price point and console versatility. If you want to spend some money, there are better surround sound headsets out there but most of them are going to cost around twice as much and will be more limited in which platforms are compatible. It is nice to have one headset that can sound great on PC, PlayStation 4 and Switch, and the USB and 3.5mm assist with the versatility factor. The standard album test that every surround sound headset has to undertake showed that the Sound BlasterX H6 brings out the subtler tones that are more audible in this format. While the headset is primarily designed for gaming, the music EQ preset does make a difference if you want to take a break from games and hang out on Spotify for a bit. 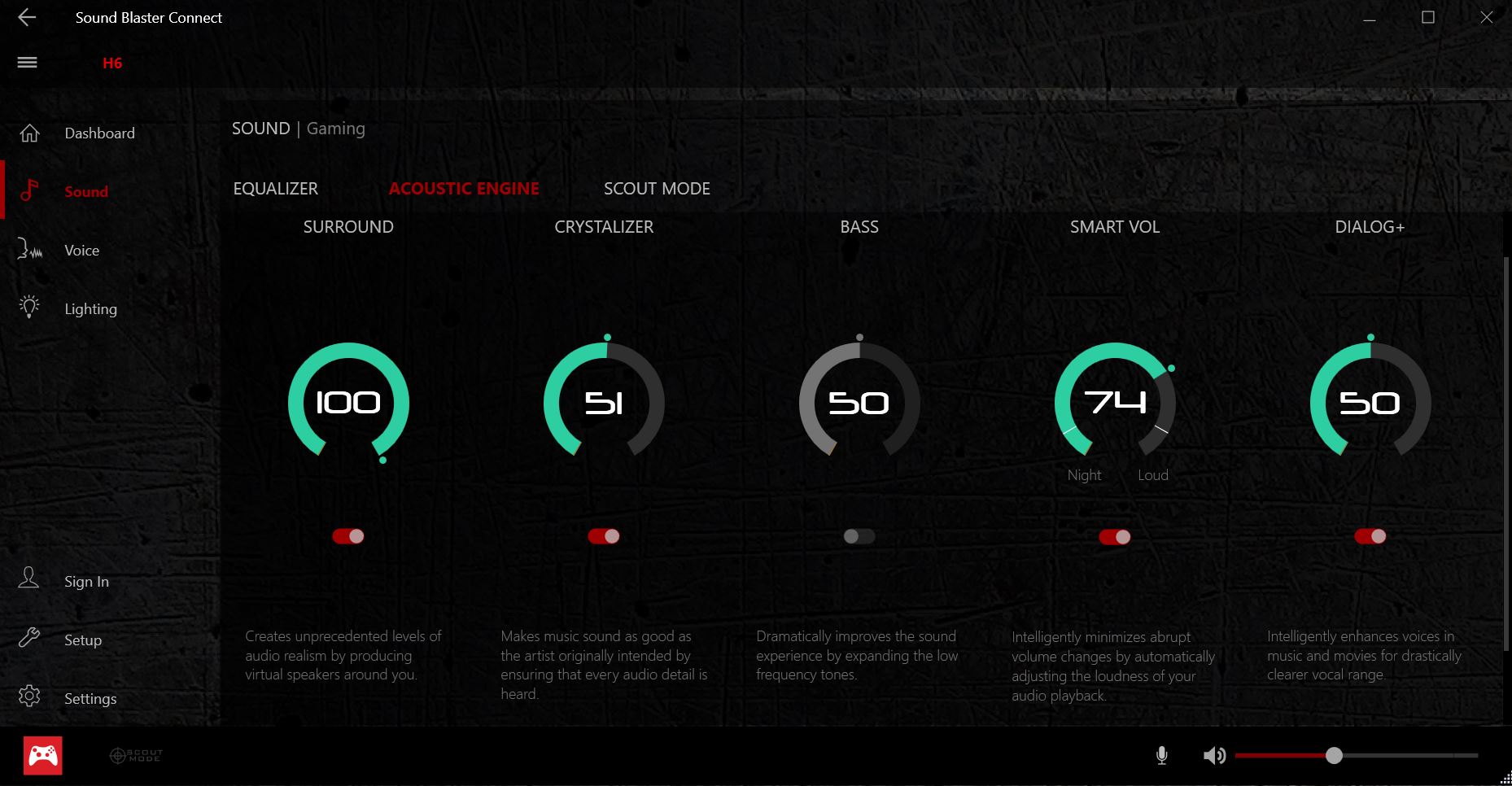 The Sound BlasterX H6 is a great option for a gamer who wants the 7.1 sound but wants to keep the price tag in the double digit range. Finding a higher quality headset for under a hundred bucks is going to be tough and the fact that this will work with everything makes it a great value. This is an ideal headset for someone who wants something that is a cut above average and offers some cool features like surround sound and scout mode. This headset is not necessarily the best at any one area, but its overall quality and how it can used on multiple consoles makes it one of the better values on the market.