The Crazy Taxi series began as an arcade hit that quickly gained a huge audience on the Dreamcast. There, its fast-paced race against time gameplay and Offspring and Bad Religion soundtrack became the stuff of legend. While the core game may have been simplistic, it was also fun and has remained an enjoyable romp for twenty years. A Dreamcast-only sequel was released that introduced a New York City setting that fit in nicely with the first game’s San Francisco one and added in not only the ability to jump, but also pick up multiple fares at a time to double up on your bonus points.

With the death of the Dreamcast in 2001, it left the series’ future in a state of flux. It was a niche series after the first game and a third entry would have to compete with far grander-scale games like GTA and the emerging open-world genre. Instead of trying to make the series something it wasn’t, they opted to create the biggest overall experience they could. The new area would be based on Las Vegas, and as a bonus that helps make CT 3 the definitive experience for the franchise, both cities from the first two entries are featured. The West Coast area from CT 1 is kept fully intact as it was, with some new areas added in. The Small Apple area from the second was given a night time makeover. 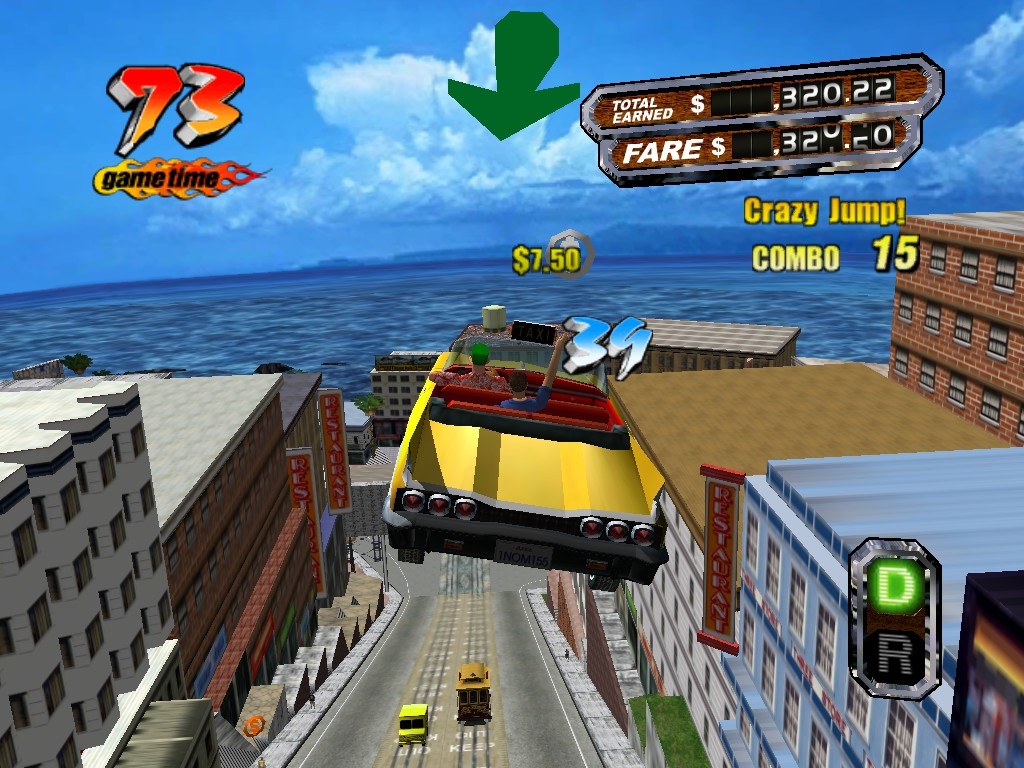 The end result is one that manages to create a must-play experience not only for Crazy Taxi veterans, but newcomers alike. The inclusion of all three core cities, sans the DC-exclusive remixed city of the first game and the remixed city of the second) gives you a lot of areas to run through. Going game to game, the West Coast area benefits the most from the improvements seen in 2. The jumping ability allows you to not only avoid tight spots in the city’s map, but also make huge money right away from the San Fran-style hills and cable cars as you can leap over things and boost your fares. The multi-passenger option allows allows those who have mastered the map to enjoy more efficient money-making as you don’t have to search around for fares and a few new areas have been added in.

The jump also changes the mechanics of getting from the first part of the city to the second half of it with the large bridge as it’s now got a large barricade around it so you don’t fly over and wind up SOL without a way to progress. New areas are attached to the ever-popular stadium area, like a theme park. These areas add something new for veteran players to enjoy and also add a bit of challenge because getting to and from them is a little tougher due to the jumping mechanic. It’s a great mechanic when you have a lot of room to move around, but a tricky one when you don’t. 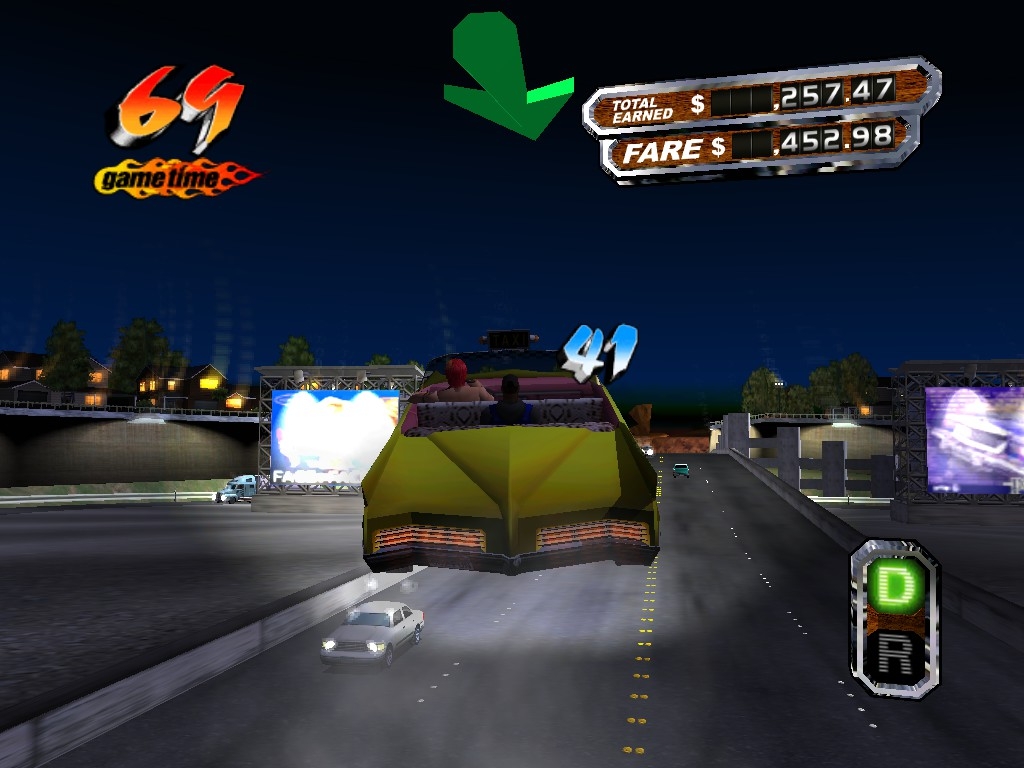 The West Coast area had to be retrofitted for it, so things like tunnels are an area you want to avoid jumping in while most parts of the map are just fine with it. The Small Apple area was great because it had a mixture of wide turns and distinct areas to play in and felt totally different from the West Coast map. The night time shift in CT 3 gives it a completely different feel and also makes it a little harder to navigate since it can be a lot harder to see obstacles in your path or make out exact signage for buildings. The biggest issue seems to be since the map was made with day time in mind, it just doesn’t translate well to night time playback.

The original area for Crazy Taxi 3 is the Glitter Oasis based on Las Vegas and it looks gorgeous — when it works properly. This locale features a lot of desert, a nice canyon and a lush strip area that evokes Vegas wonderfully. This setting was perfect for showing off all of the bloom lighting that was the rage at the time and it’s still an impressive area to look at. Unfortunately, it does cause the game to chug when you combine all the lighting with various speed blurring effects. The map itself is a lot of fun to explore and it’s probably the hardest one to learn due to how complex it is. There are a lot of areas you can get lost in and the in-game arrow navigation has never been ideal. 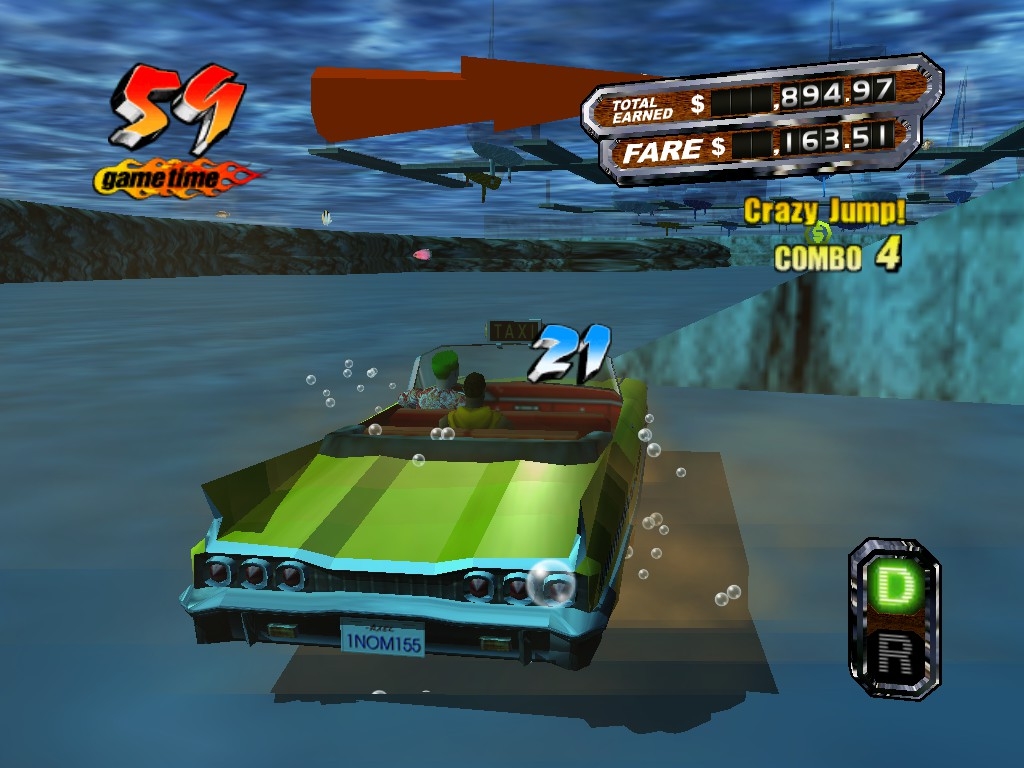 Slowdown aside, the overall visual presentation of Crazy Taxi 3 is good. It doesn’t look on-par with the highest-end of original Xbox games, but it does have some graphical flourishes that couldn’t have been done on the Dreamcast. The revamped lighting helps the Vegas area feel like the real deal, while the New York-esque area benefits visually from the night time view on a sheer surface level — but it does hurt the core action because of how much harder it is to see it instead of the daytime version in CT 2. Ideally, day/night variants of each stage would have been put in to help with this, but that didn’t happen.

The Crazy Taxi series was known for its hard rock soundtrack and that was retained in the third entry – at least on Xbox. There, you’ve got your usual mix of The Offspring alongside some Vegas-themed songs for the Glitter Oasis. Generally, the OST gets bits and pieces from the first two with some new wrinkles thrown in for Vegas. The Xbox version of CT 3 doesn’t keep every song from the first two games, but you get enough of the flavor of what they had that you don’t lose much. On PC, the soundtrack is changed to much livelier fare and it’s just ill-fitting. The songs themselves are fine, but cheery ’70s music doesn’t fit the late ’90s setting of the game at all and takes you out of things. Fortunately, you can always just turn the in-game OST and put the original OST on in the background. 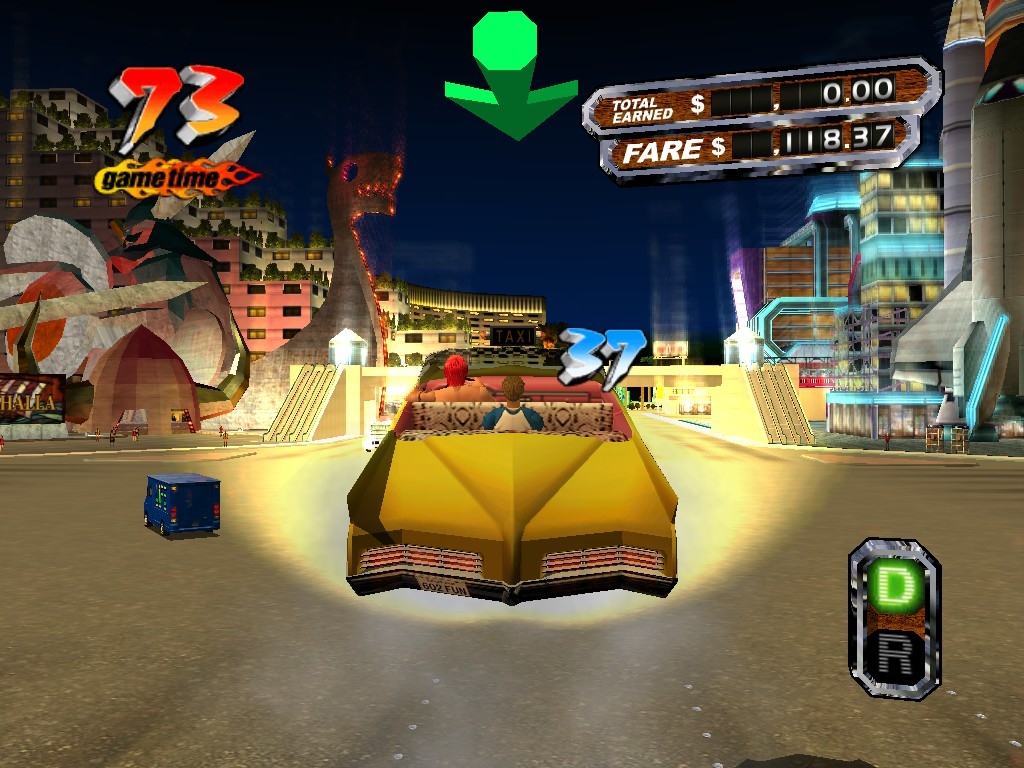 Crazy Taxi 3 isn’t perfect, but it remains the most fun entry in the series — at least on the Xbox. Unfortunately, playing the game on modern hardware is tough as the game was never part of the Xbox 360’s backwards compatible lineup, nor was it added to the Xbox One’s BC program. With the 360, videos showcasing OG Xbox games running on an unlocked version of the Xbox emulator show that it didn’t run well — and it ran poorly enough to where it is fully understood why it wouldn’t hit. On modern consoles, the music licensing alone would cause issues and it’s unlikely the game would sell well enough to warrant it. Ideally, a re-release could be done.

If you still have an original Xbox and its DVD drive isn’t shot, give Crazy Taxi 3 a chance. It’s only around $15 or so now and with a nice set of HDMI-compatible cables, it allows this game’s lighting to shine in ways it couldn’t do with component video. The PC version in disc form is nearly impossible to play on modern PCs, but if you can extract the data from it, you should be able to play it with a Windows 10 PC with the terrible OST. It’s still better than nothing and does have support for modern controls thanks to its config setup. No matter how you enjoy it, Crazy Taxi 3 is a must-play for anyone who loved the original game and wants to see that game’s city in its best possible light.