It has been nearly a decade since the last single player-only Star Wars title. Although 2017’s Battlefront II included a brief solo campaign, EA has been largely unsuccessful when attempting to develop offline adventures based on the popular science fantasy franchise since the publisher acquired the license in 2013. After several disclosed attempts, including a cancelled title from the now defunct Visceral Games, EA seems to have finally found a developer it’s willing to trust with the license in a single player capacity in Titanfall and Apex Legends developer Respawn Entertainment. Since 2016, a team led by God of War III director Stig Asmussen has been hard at work on an original Star Wars adventure, and we were recently provided the opportunity to spend some time with the fruits of their labor as the title preps for launch next month.

The vast majority of the story details are still being kept under wraps, but for those unfamiliar with the general premise, Star Wars Jedi: Fallen Order takes place between the events of Episodes III and IV, after Order 66 wipes out the vast majority of Jedis and kicks off the rise of the Galactic Empire. One of those Jedi who has thus far managed to remain hidden is Cal Kestis, an unfinished padawan who is attempting to remain undercover until he is thrust into an interplanetary adventure with great implications. During our time with the game, we got to meet several of Cal’s crewmembers that will be assisting him in his journey aboard the Mantis ship; Cere and Greeze, both of which bring their fair share of personality in cutscenes and optional conversations to help deepen Cal’s tale. In addition to chatting, the Mantis serves as a sort of hub that gives Cal the opportunity to upgrade his lightsaber, check on collectibles and choose his next planetary destination. 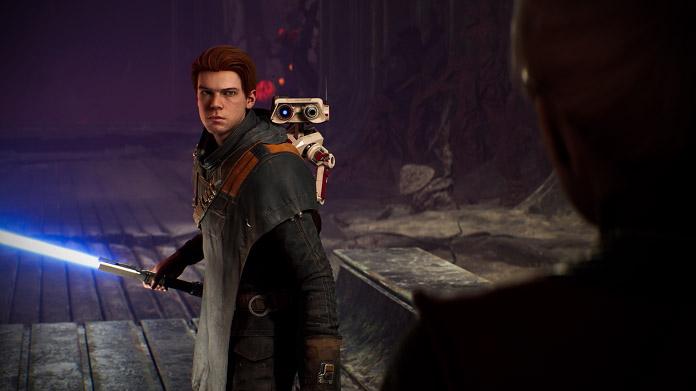 This slice of gameplay takes place on the original planet of Zeffo, which houses the ruins of an ancient civilization known as the Zeffarians. This section is from early on in the overall campaign, so Cal’s abilities were rather limited, both for lightsaber attacks and Force powers, allowing the core combat to be more properly observed. While one enemy will rarely present too much of a challenge, even a relatively small group of stormtroopers, alien creatures or both can be surprisingly taxing, as the player attempts to keep track of both ranged and close strikes from enemies. Even in the couple hours of gameplay, the variety of enemy types was readily apparent, including Stormtroopers with gatling guns and RPGs in addition to larger beasts that charge down Cal with no hesitation.

Fortunately, the core combat feels smooth and responsive, as the controls allow for simple but effective combinations of Cal’s abilities in addition to a lock-on system that helps players easily keep track of larger encounters. While dodging is a valid means of defense, well-timed blocking is key to surviving these battles, allowing for deflected blasters that return to their target and parry opportunities to quickly take down nearby foes. Offensively, Cal’s light and heavy attacks can chip away at an enemy’s stamina bar even when blows don’t fully connect, similar to Sekiro’s posture system, while Force Slow can halt faraway enemies and Force Pushing can interrupt incoming charges (or send opponents flying off a nearby cliff). As a result, each encounter brings a variety of ways to approach it, and makes them feel rewarding to complete and overcome for both low and high-challenge fights. 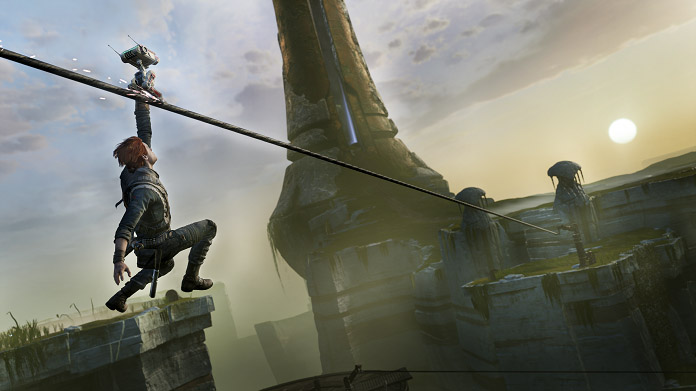 In-between bouts of combat, Cal’s traversal of the planet brings its own set of obstacles. In addition to relatively basic means of traversal including climbing, jumping and sliding, Cal’s Force abilities also come in handy by slowing down the blades of a fan or blasting down weaker walls. Zeffo’s open spaces allow for plenty of opportunities for exploration, rewarding curious fans with new bits of lore, customization options and even upgrades, which are often spotted by the beeps and scanning lights of Cal’s companion droid BD-1. BD-1 also houses the holographic map of the planet, which helps players keep track of unexplored paths and areas they need to return to later on after receiving new abilities. The planet is interspersed with meditation spots which offer the player the opportunity to spend skill points and regain health and health pods, although the latter mechanic will also respawn enemies that aren’t in the immediate area.

Zeffo’s main attraction is an underground temple that houses some creative level design that serves as a proper introduction to the Force Push ability. Featuring a mysterious and foreboding atmosphere, the area regularly introduces new uses for familiar mechanics both for combat encounters and puzzles. The exploration of the temple ultimately culminates in a large-scale puzzle that takes advantage of the newly-learned Force power, utilizing wind tunnels and pushable balls alongside Force abilities, which can be utilized without restriction unlike in combat. While the moving contraptions and physics manipulation would feel right at home in a Tomb Raider adventure, there’s an undeniable Star Wars vibe coursing throughout and BD-1 is accessible at any time to assist players who need a push in the right direction. This promise of a memorable set-piece as the third act of every planet is truly intriguing, particularly when considering visits to both familiar and wholly new Star Wars planets. 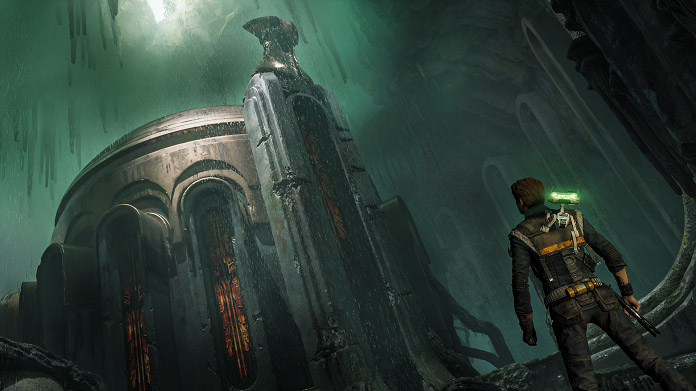 After a high-stakes final encounter before Cal returns to his ship and crew, we were provided the opportunity to view a late-game combat encounter on the Jedi Master difficulty, with both Cal and his main opponent utilizing a number of new abilities. The showdown was an engaging experience even as a viewer, as the two traded blows and barbs with equal parts speed and strategy. The promise of the ability to overcome such a challenge in the later stages of Cal’s journey offers a peek at the high potential that Star Wars Jedi: Fallen Order has to offer, and if the rewarding exploration and well-designed puzzles can match that same tempo in the hours that follow, the full title could be a return to form for Star Wars in video games. Star Wars Jedi: Fallen Order is set to launch on November 15 for PS4, Xbox One and PC.