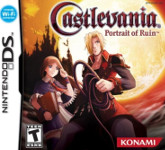 In the 22 years between Castlevania: Symphony of the Night and Bloodstained: Ritual of the Night Nintendo handheld consoles were the only place to get a new Castlevania game in this style. Each of these titles had their own quirks that made them unique enough among each other but everyone knew these were just new iterations of the Symphony formula which is really what we wanted. Castlevania: Portrait of Ruin was the second entry for the DS and introduced some interesting ideas to the format without changing things up too much. By 2006 we were accustomed to expecting our Igavanias to be on a handheld and while we wanted a proper Symphony follow up on a home console it’s hard to argue how great these Handheldvanias are.

Castlevania: Portrait of Ruin is a continuation of Castlevania: Bloodlines. Set in Europe in 1944, our heroes are fighting to keep Dracula from resurrecting again while the rest of the world is dealing with the fact the globe has turned into a Risk map, though one could make the argument battling the Prince of Darkness is a better excuse not to go to war than bone spurs. The two playable characters are Johnathan Morris, son of John Morris from Bloodlines, and Charlotte Aulin who is descended from the Belnades clan that was in Castlevania III: Dracula’s Curse. Johnathan is currently in possession of the legendary whip Vampire Killer, given to him by his father. Unfortunately since he’s not of the Belmont bloodline he cannot unlock its full power. Charlotte is mage, and while per video game archetype rules prevent her from wielding the heavy equipment, she does have access to a variety of powerful spells. This is also the first Castlevania to include co-op mode via Wi-Fi. 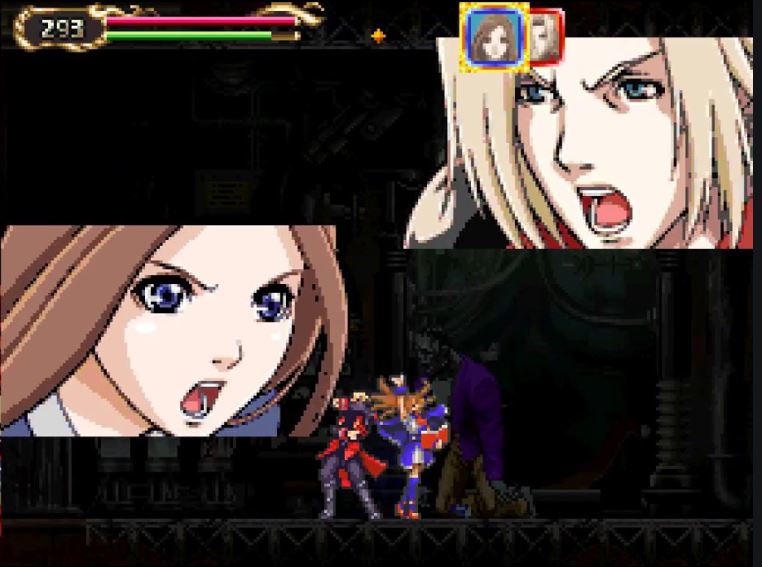 Dracula being revived and ruling over Castlevania is a common theme in these games but there are a few other problematic vampires to address here. The current main vampiric threat is one by the name of Brauner who is currently in control of this castle and actually wants to interfere with the revival in order to strengthen himself by absorbing Dracula’s power. Brauner is loosely based on a real artist who was active during the time of Portrait of Ruin’s setting named Victor Brauner. The other two are Eric Lecarde’s daughters Stella and Loretta. The two sisters came in search of their father and had an unfortunate run in with Brauner who did what vampires generally do to meddlesome humans.

Different masters tend to run their houses differently from each other and Brauner’s rule over Castlevania has some design choices that vary from Dracula. Brauner recreated Dracula’s power using the souls of those killed in World War II, with the ultimate goal of eradicating humanity. In comparison to some other Castlevania titles Brauner’s castle is much more modest in size. This is deception. Brauner is able to create paintings that serve as portals to different dimensions within the castle, many which seem like entirely different worlds that what would find by exploring a wing of a castle even if it is created and controlled by a highly-powered vampire. Going through these portraits is necessary to uncover all the secrets and artifacts, not to mention becoming powerful enough to defeat Brauner and put an end to his curse which will grant rest for his legion of the undead. 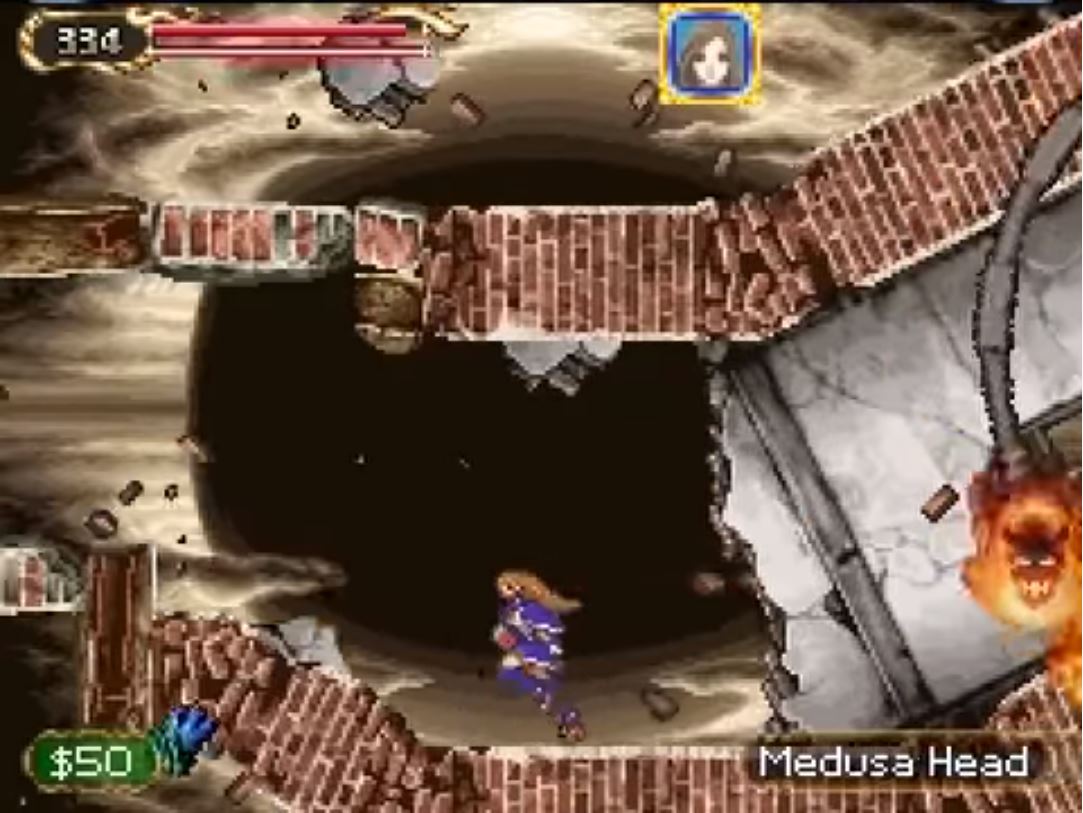 Even with the story focusing away from Dracula being the main villain and the new gameplay mechanics involving the option of having both playable characters on screen at once this is classic Igavania gameplay. The format is familiar, explore the different parts of the castle with some linear progressive limits enforced by needed to acquire special traversal abilities. The use of portraits opens up some environmental design freedom since the developers weren’t limited as much by having to make each area look like part of a castle, and even though the game is contained within the confines of the castle and its linked interdimensional portraits it had a sense of being a larger game world than it really was. Castlevania titles are known for memorable boss battles which Portrait of Ruin delivered and using the AI teamwork helped make the boss fights more interesting.

Having two vampire hunters double teaming everyone in Dracula’s castle might seem a bit unfair but this is not always one sided. After thirteen years the spoiler statute of limitations has expired, but just to be nice here comes a spoiler. After Brauner is defeated in combat, the expected surprise twist is the game is not over. Death shows up to deliver the killing blow and once again Dracula is revived. Fighting death prior to Dracula has been a standard convention in more than one Castlevania game as Death and Dracula are some of the more challenging boss fights in the franchise. The final showdown is John and Charlotte pitted against Death and Dracula in a team battle. Fighting two iconic franchise bosses in a single battle makes for a challenging but climactic battle even if it does put the DS at risk for being a projectile. 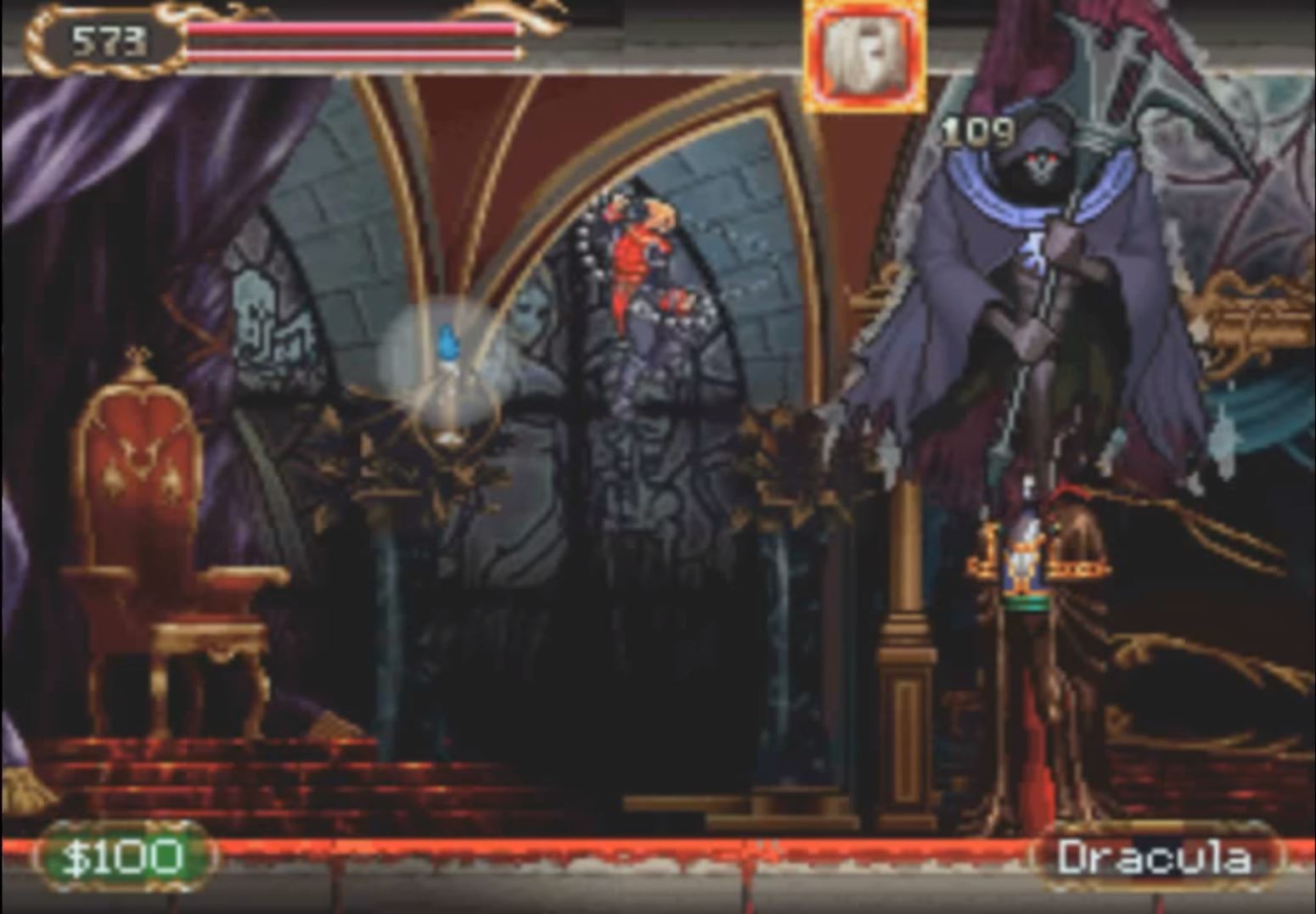 Castlevania: Portrait of Ruin brought some new ideas to this type of Castlevania but respected the adage of if it ain’t broke don’t fix it. The new portrait and box art in the game helped set it apart from the Symphony art style that was seen in the Sorrow and Harmony titles which seemed fitting due to this game taking on a slightly different tone. When this title was announced pre-orders came in a special edition that among some other goodies included a small artbook and Castlevania game soundtrack sampler with assorted tracks from various games to commemorate twenty years of Castlevania. The teamwork aspect between John and Charlotte does make this entry unique among the six GBA and DS Castlevania handhelds, but more importantly it’s overall one of the best games in the DS library.