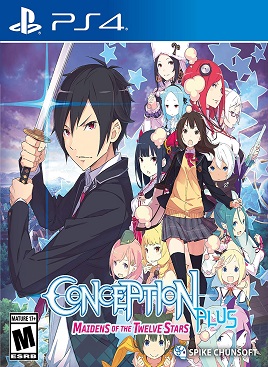 Conception PLUS: Maidens of the Twelve Stars

Spike Chunsoft’s Conception series is a series that almost feels like it was created to capture befuddlement from the world. Of course, if that was the plan, it kind of backfired as the PSP original never got an English translation when it released in 2012. It wasn’t until a couple of years later when the sequel to the JRPG/Child Spawning/Dating sim hybrid, Conception II: Children of the Seven Stars, finally ventured over to the Vitas and 3DS’ of those that don’t brave the import scene. The result was a decent portable title, perfect to confuse incredulous friends while out and about or to clear a dungeon floor while stuck doing laundry. It proved to be a minor success, and Spike has finally deemed it time to bring the original title over with updated graphics with Conception PLUS: Maidens of the Twelve Stars. It’s still weird.

It’s a story as old as time: friends Itsuki and Mahiru are chilling on the roof of their high school when Mahiru confesses that she believes she might be pregnant. Considering that she’s a virgin, this seems unlikely, but everything else matches. The sky then opens up, sucking the pair into a strange world. Mahiru pukes up a monster, Itsuki kills it, then a fur fairy traipses along and informs them that they are God’s Gift, destined to save the world by locking away impurities that are manifesting in the Star Labyrinths. Well, more specifically, Itsuki is. Mahiru is a woman, so she gets relegated to breeding stock. It’s… not an enlightened game at first glance. We’ll get to that in a moment.

The thing with being a God’s Gift is that he has the power to “Classmate” with one of the twelve Star Maidens, which gives birth to a Star Child that can be used in the pursuit of clearing the Labyrinths and the Impurities within. So, it’s up to God’s Gift to develop relationships with the various ladies, as the progeny of the ritual becomes more powerful based on the strength of the relationships. It’s up to the player to meet up with the Maidens to develop bonds, occasionally make conversational choices and try not to behave too much like a boor in order to save the world of Granvania so that Mahiru and Itsuki can return home. 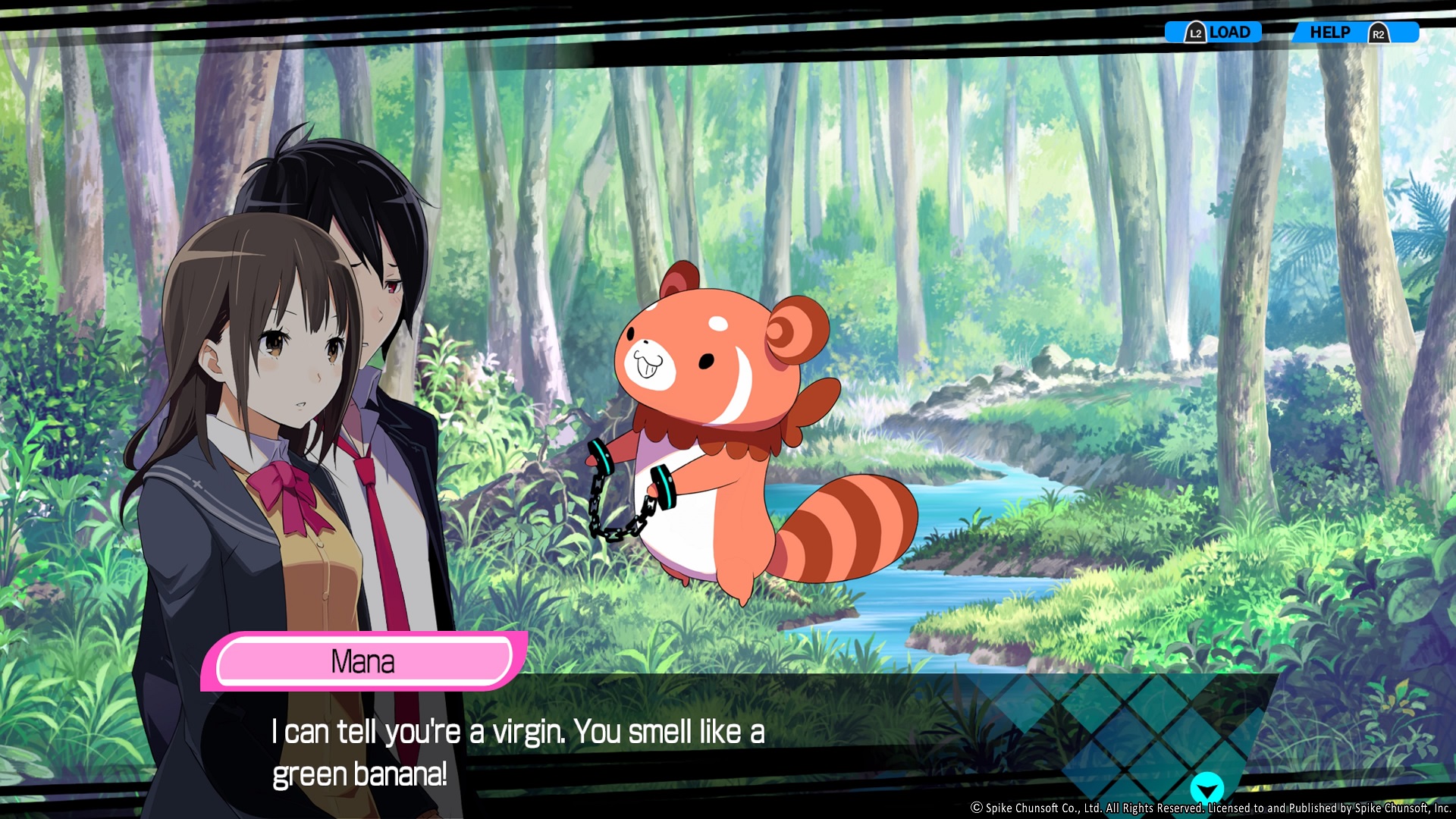 At first blush, the game appears to be a manifestation of the pubescent and immature fantasy of being able to *ahem* mate with a multitude of ladies with no repercussions. It seems piggish and more than a little yuck. In fact, the writing goes places to make the player feel more than a little skeevy for enjoying it, and it’s a great way to prompt an uncomfortable conversation with a spouse that happens to be witnessing huge swaths of this. However, there are actually personalities with dimension behind some of the ladies.

They have hopes and dreams. They have fears, wants and desires. Some are better written than others, but the game goes to great lengths to build most of the ladies into real people and encourages the player to behave respectfully and honestly. Unlike some other dating sims, it’s not always about choosing the response that the players believes they want to hear. It’s about choosing the most appropriate response. Also, they hate it if the player checks their voicemail in the middle of a conversion. It helps that Itsuki is a leering letch and that the ladies put him through every conceivable shade of hell when the player misbehaves. Unfortunately, what was fleshed out works, but there needed to be more dialogue choices in play. 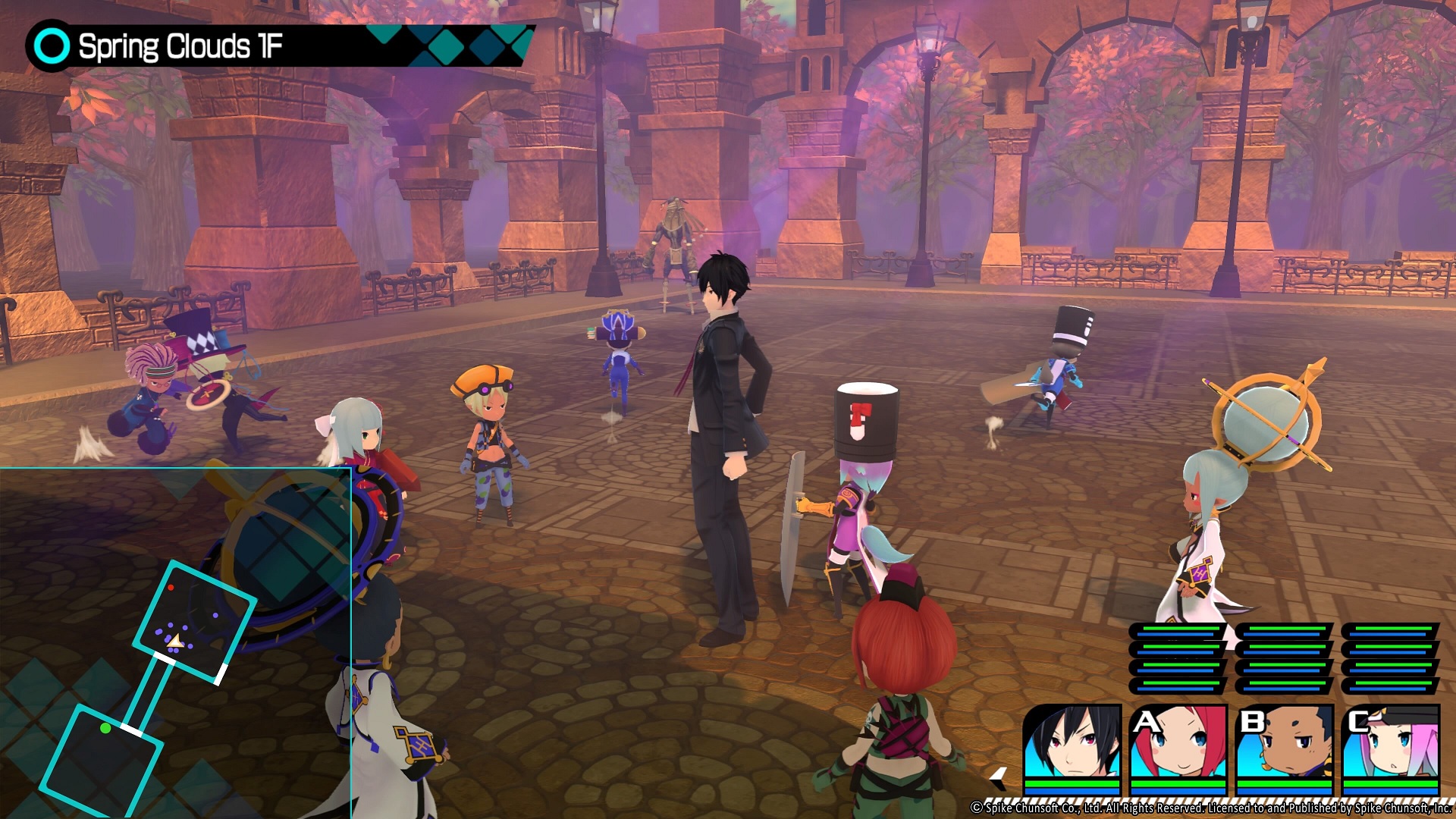 Once the sexy stuff and dating is stripped away, what remains is a competent, but altogether uninspiring JRPG in the vein of Persona 3. Players build up three teams of four Star Children and go traipsing around the Star Labyrinth to get to one of twelve end points, kill a boss and drop a seal. Building the teams does require some planning, as one wants to balance the healing of a cleric against the defense of a paladin or the boost to luck a merchant can bring, but the actual dungeon crawling is dull. Contributing to the grind is a lackluster tile set that is randomly generated each time one enters the dungeon. Mix this with a handful of palate swapped enemies that are repeated to a staggering degree, and the fact that most of the loot found within never feels rewarding, and the actual meat of the game, the goal behind all of the stuff Conception PLUS does feel undercooked. Considering that the Star Children are intended to be disposable, with a goal of releasing them into the city to level it up, unlocking new items and features, expect to have to explore earlier areas often to even stand a chance at the ones lower in the depths.

Contributing to the tedium is the fact that each of the many battles are protracted affairs. The fight starts, the player jockeys for position to hit the weak spots while avoiding the danger zones until the basic mobs with health bars that manage to be about twice what they should be finally fall. It gets to the point where the player will turn on the auto-battle option, set it to fast forward, go to use the bathroom and possibly varnish that piece of antique furniture they’ve been putting off, and the fight will be almost done by the time they return. This is even when choosing the “just use all of the MP to finish this” option. Fortunately, the auto-battle AI is smart with self preservation, and will use healing spells judiciously if things look dire without going overboard. 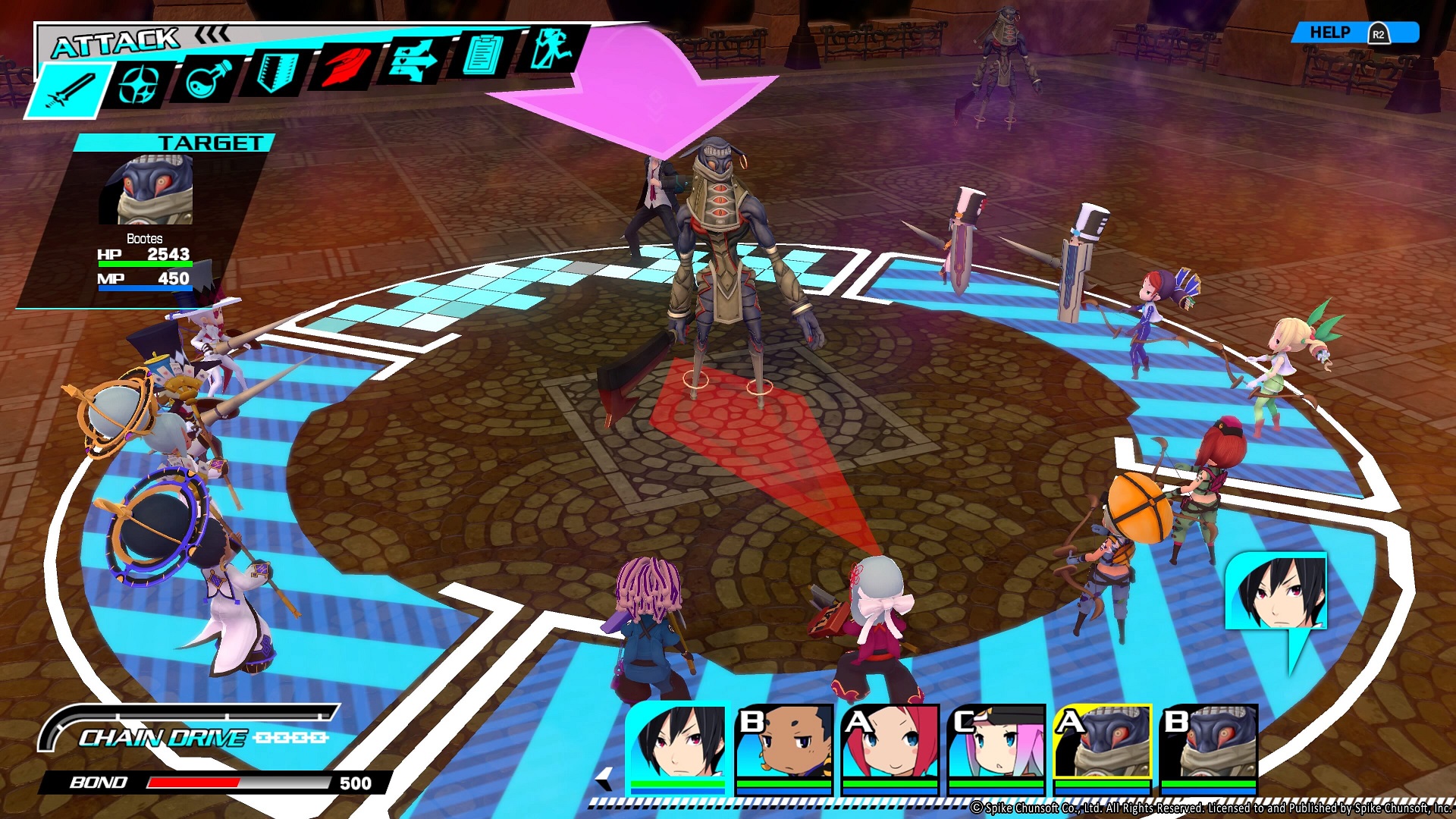 When a boss does come up, the lengthy battles are at least excused. This is where the real challenge is supposed to lie, after all. Players can build a Chain Meter to lock down the opponent, delaying their turn and earning extra experience. In dire moments, one of the teams of kids can form a Mecunite, a mecha-like being with powerful spells and attacks, to help wiggle out of a tight spot. This tends to be rarely used, though, as the bosses tend to be pushovers compared to the never ending slog of the normal foes.

It’s possible that these complaints stem from Conception PLUS’ status as a remake of a Japan-only PSP title. After all, what works for portable might not work as well for extended play sessions on the big screen. Speaking from personal experience, I played quite a bit of the second Conception title which was released stateside on PS Vita when it came out a few years ago, and had a grand time with it, despite the fact that the mechanics and gameplay are pretty much identical. This is a game best played in bite sized chunks, which the portable format that it was originally created for excelled at. 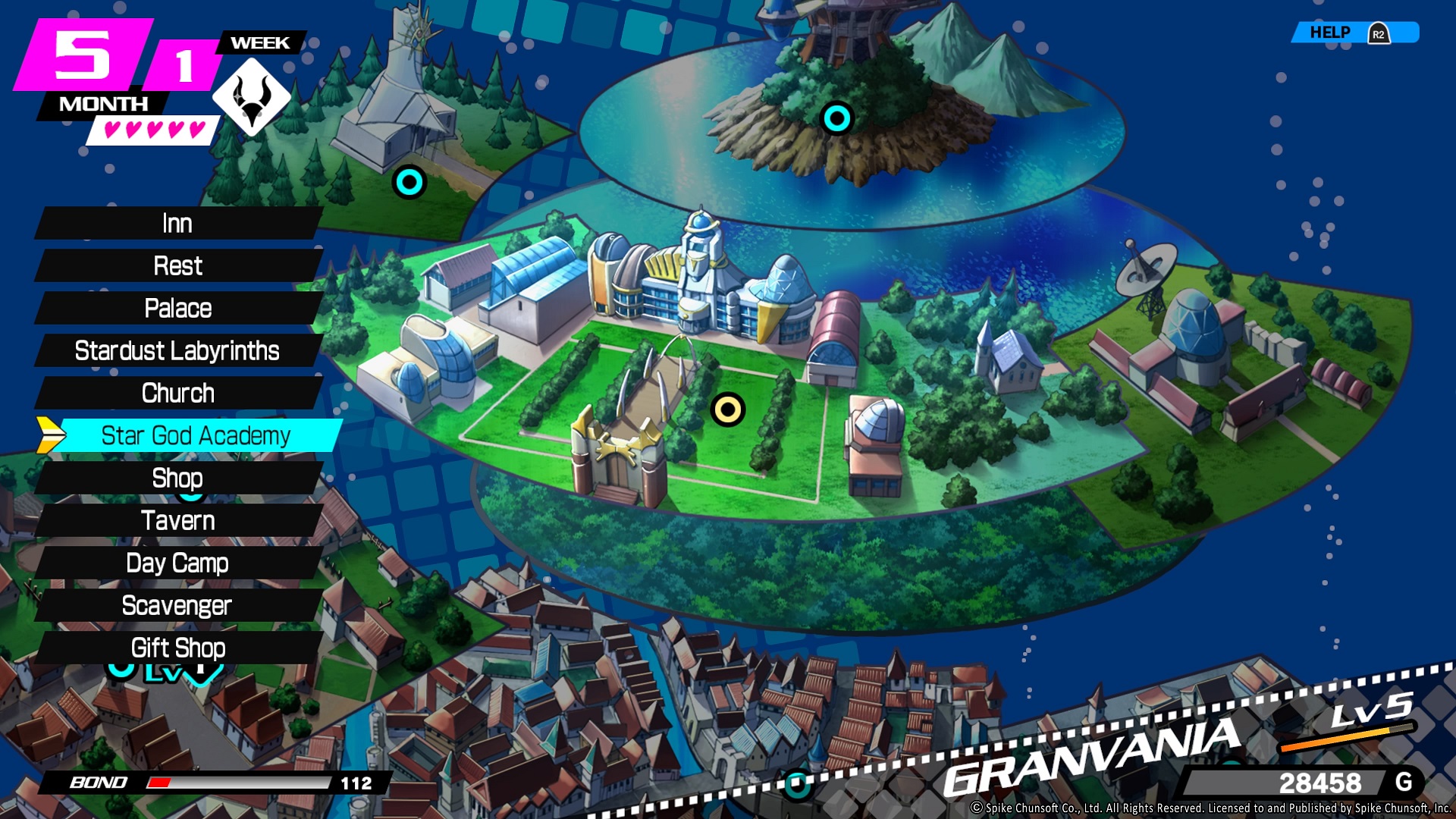 It’s not that Conception Plus: Maidens of the Twelve Stars is a terrible game. In small bits, it can be fun to progress through the story and make the numbers get bigger. The problem is that, once the weirdness wears off, it’s an achingly average to below average JRPG. So much feels padded for the sake of prolonging the run time, the environments of the dungeons never feel interesting, and the challenge is to the player’s patience, not their brain. Spike Chunsoft have a concept here, but it’s one that needs a little more time gestating. Considering how great Spike Chunsoft is as a developer and publisher, we should hope for better than Conception Plus: Maidens of the Twelve Stars.