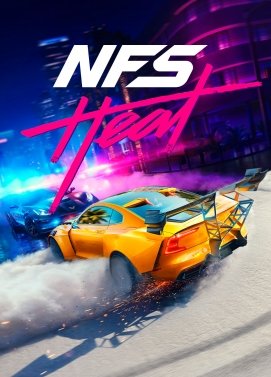 After 25 years and almost as many titles, Need for Speed has cemented itself as one of the predominant racing franchises in gaming thanks to its fondness for high octane racing in real world locations while evading (or occasionally becoming) the law. Unfortunately, the series’ reception during the course of this most recent generation of consoles has been less favorable. After the promising Need for Speed: Rivals launched alongside the PS4 and Xbox One, the franchise has stumbled with a 2015 subtitle-free and FMV-focused reboot and 2017’s Need for Speed Payback both being lambasted among fans and critics. With Forza Motorsport and Horizon both taking big steps forward to help evolve the racing genre, Need for Speed has one last chance this generation to prove to fans that the series is still relevant over two decades later while also taking advantage of the rare off-year from Microsoft’s flagship racer. Even with this opportunity at hand, EA has been reluctant to advertise this year’s edition, Need for Speed Heat, foregoing the chance to show off the game at E3 and releasing only reveal and launch trailers for the game since its debut three months ago, stirring caution in fans about the potential of the latest open world racer from Ghost Games. Despite poorly-balanced AI racers and an overly-serious story, Need for Speed Heat’s packed open world, rewarding upgrade system and high-stakes day/night dynamic makes for a mostly enjoyable trip to Palm City.

For the third entry in a row, Ghost Games is once again attempting to implement a story into Need for Speed, likely to separate the series from the mostly non-existent plots that are found in its competitors. Need for Speed Heat takes players to Palm City, where a police force led by LT Frank Mercer are cracking down on illegal street racing, with the opening story moments making it immediately clear how far the officers are willing to go to prevent the crews from partaking in their illicit activity of choice. Although the three main representatives of the Palm City police that continue to reappear in the plot can almost be comically evil at certain points, they make for a formidable opponent as the nameless Player joins fellow racer Ana as she looks to rebuild her crew and take on The League, the predominant group of underground racers, much to the chagrin of her brother Lucas. The story rarely steps outside of unfamiliar territory as far as underground racing tales go, and it has a tendency to take itself far too seriously at times, but the serviceable writing and performances offer a decent motivation to continue checking out campaign missions for solo players.

The potential of any racing title can only go as far as its driving mechanics will allow and fortunately Heat has some solid core gameplay to back it up. At its fastest, Heat offers the same exhilaration that has carried this franchise for years, even if the winding roads don’t always accommodate for your desire for high acceleration. At its early stages, the turbo has been noticeably reduced and contains a substantial cooldown, forcing players to more carefully consider when to take advantage of these key bursts of speed. The precision required for drifting has also been increased, forcing players to rely solely on the gas pedal to pull off tight turns while maintaining speed. These constraints go a long way toward making the handling feel a bit more grounded, even though Palm City and its courses still offer plenty of opportunities to fly off of ramps and go off the beaten path. Hardcore racing fans can also fine-tune their setups on the fly to make minute but key changes that aren’t necessary by any means, but bring some welcome depth to the already plentiful customization options. 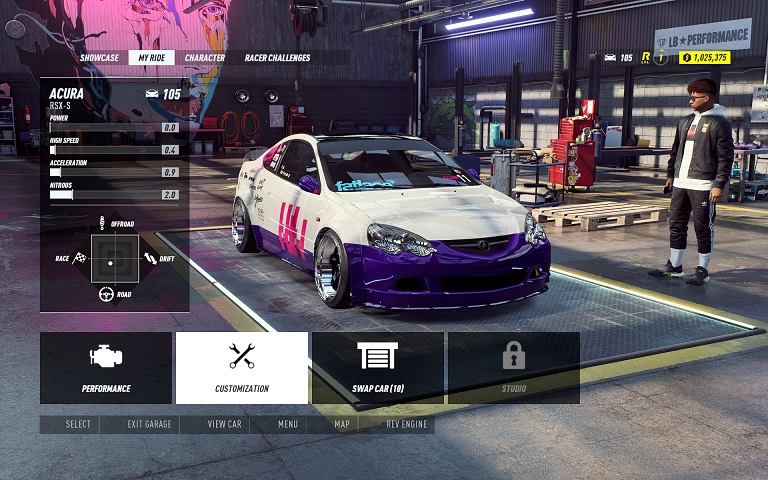 Outside of campaign and side missions, the core gameplay loop consists of alternating between day and night while attending races, completing challenges and discovering open world activities to conquer. Both day and night largely feature the same opportunities, primarily consisting of circuit and sprint races that arise as the player upgrades their vehicle of choice. Unfortunately, despite the player’s individual vehicle level, the AI racers are poorly optimized to handle any strategies that don’t involve sticking to the track at hand, so players that take shortcuts of any length can often easily claim first place with little extra effort. This downside continues to surface even when playing online, since although online play makes for a more populated open world driving experience, the relatively small lobby of players are the only ones considered when matchmaking for a specific race, often leaving AI racers as the predominant opponents in most events. Although this setback will hopefully be further adjusted in the weeks after launch, it can feel somewhat repetitive to win races with little to no opposition during the early stages of the campaign.

Easily the most interesting addition that Need for Speed Heat brings to the table is the juxtaposition when playing during the day or during the night, which is the final choice upon leaving the garage as the player starts their next session. The daytime offers a more traditional Need for Speed experience, as players are rewarded with Bank, which can be used to purchase performance upgrades, new vehicles and customization options for both your car and avatar, as well as a minimal amount of Rep, which is utilized to unlock new events and items for purchase. Despite the seemingly large number of items that players can spend Bank on, players will often house large amounts of Bank with little to spend it on, which is primarily due to the fact that upgrading vehicles is far more lucrative for increasing vehicle levels than starting at the beginning with a brand new car. This gradual realization is unfortunate considering the large variety of vehicles present within the game at launch and feels vastly different from the franchise’s competitors which often feel overly willing to increase the player’s available cars. 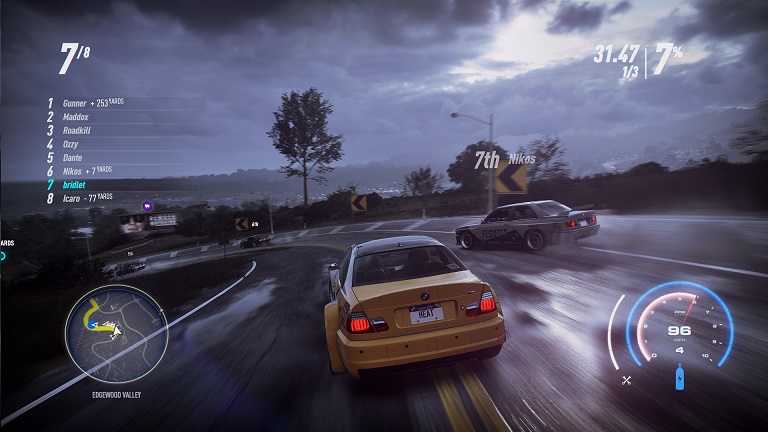 As a result, players are strongly encouraged both directly and indirectly to spend most of their playtime during the night, where successful race and open world activity completions will net players much more Rep. The police, however, which will not chase racers during the day unless provoked, are much more aggressive in the dark and will actively seek players out as your Heat meter increases, which raises as you engage in activities and pursuits during the night. Police will even interfere mid-race, adding a greater sense of stress as you balance both those trying to race you and those trying to bust you. The player’s heat level is directly tied to a multiplier that will increase the total rep earned when the player visits the garage at the end of the night, but greedy players who stay out too long can only visit repair stops three times to fix their vehicle, and risk dealing with more powerful police opposition that will eliminate the vast majority of any earned Rep and Bank upon wrecking or capturing you. This high-stakes playstyle effortlessly creates some of the most memorable moments while playing, as you desperately try to evade the law and take advantage of the Rep you worked so hard to earn, leading to sequences of great relief or disappointment.

The fictionalized Miami-based world of Need for Speed Heat known as Palm City is a worthwhile if unambitious environment to explore and race through. The open world is largely comprised of several cities along the edges, while the interior features more natural and off-road spaces accompanied by long highways. The lack of noteworthy landmarks or unique characteristics can make traversing the eighteen districts feel largely similar, but fortunately this reasonably-sized world is filled to the brim with open world activities. From strategically placed ramps that challenge players to cross great distances in the air or break billboards, to long stretches of road that task players with building up speed or performing a large number of drifts, to hidden flamingoes and street art to uncover, Palm City is rarely lacking in things to do even when players aren’t racing. Completing each group of activities within a district as well as reaching 100% within each district offers its own aesthetic reward, leading to a lengthy and worthwhile diversion that should keep completionists occupied for plenty of hours.

Although the visual presentation of Need for Speed Heat is simply content with doing what’s necessary, the bright colors go a long way towards setting the vibes of Palm City, as the bright blues and pinks shine during the nighttime and loading screens to create a distinctive atmosphere among racing games. The soundtrack further bolsters the tropical vibes of Heat with a selection of hip hop, Hispanic and electronic tracks that align with the fast-paced energy of the on-screen racing, and is coupled alongside a powerful original piece that plays during police pursuits that easily adds to the stressful challenge of evasion. The game largely feels polished, with no online issues to speak of during the pre-launch phase and only a small amount of texture pop-in to speak of during the faster-paced moments, with nothing too egregious that would ruin any momentum. Although not specifically a glitch, some open world conversations do have a tendency to repeat themselves when players spend long chunks of time not competing in races or story missions, which feels annoying and odd considering the large amount of open world activities the game regularly encourages you to do. 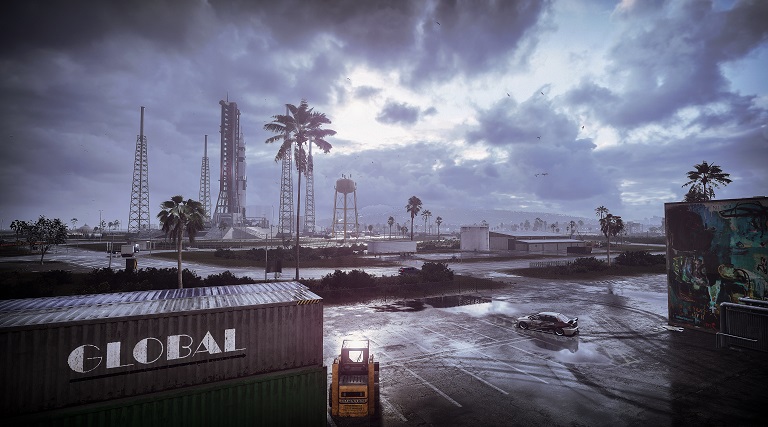 The adrenaline-inducing, high stakes nightlife of Need for Speed Heat is an exciting idea that pushes the franchise forward after years of stagnation. The packed, vibrant world of Palm City and solid driving mechanics go a long way towards helping as well, but the poorly-balanced AI opponents, middling story and barebones online integration hold Heat back from standing among the best in the series. Nonetheless, Need for Speed Heat features plenty of hours worth of high octane racing while representing an encouraging return to form for the franchise as it heads into the next generation.