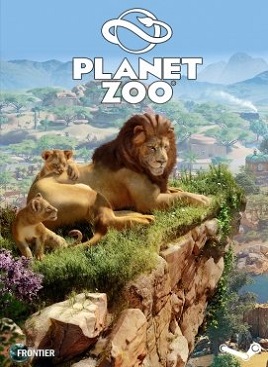 While this could be credibly argued, there’s no games genre that better captures the late 90s/early 2000s than the “Silly Business Sim.” Titles like Theme Hospital and RollerCoaster Tycoon dominated the landscape of PC gaming, serving as a conduit to create some truly horrifying/funny scenarios that provided longer-lasting amusement than simply shooting a demon in the face. Unfortunately, those were harder to translate to consoles, so the style remained mostly PC and failed to have as much of a long-lasting impact on gaming as a whole (as an aside, after spending stupid amounts of time on the Atari Jaguar version of Theme Park, this reviewer can attest that there were good reasons to keep it on PC). Sadly, the genre lost its luster, languishing forgotten. The studio Frontier Developments has had plenty to say about that in recent years, working to almost single-handedly resurrect the style for modern audiences. Planet Coaster is regarded as the perfection of RollerCoaster Tycoon and Jurassic World: Evolution is at least competent. Other developers who took a swing at the dinosaur park building thing can’t claim that. Now, the studio has released the highly-anticipated Planet Zoo. While there are myriad rough edges that need to be sanded down in the upcoming weeks and months, Planet Zoo is the superior version of Zoo Tycoon that fans have been craving.

In this monster of a game, the player is tasked with building up and running a zoo, as the title would suggest. Donning many different hats, it’s up to the player to build a collection of animals, tweak their habitats for maximum enjoyment for both the creatures and the visitors, keep on top of maintenance and run a successful conservation program while bringing in enough of a profit to be able to expand and contribute more. It is a constant balancing act of spend and take, trying to decide what corners to be cut and how to get the most bang for the funds available. In essence, it’s the quintessential business management game for animal lovers and genre fans alike.

With all of the options available, and there are a dizzying amount that can be done, a good tutorial is a must. For the most part, Planet Zoo handles this well. Starting off in England, the game walks the player through step by step on building, maintaining and perfecting exhibits. It offers a simple, step-by-step goal list that breaks down an overwhelming interface into an understandable layout allowing for creative design. Filled with lame dad jokes and jam packed with information, this is one of the best-written tutorials out there, managing to avoid talking down to the player while handling even the most basic concepts. Underneath the light-hearted veneer, however, lies a game that takes its subject matter seriously, delving into aspects that the average zoo visitor would never think about. 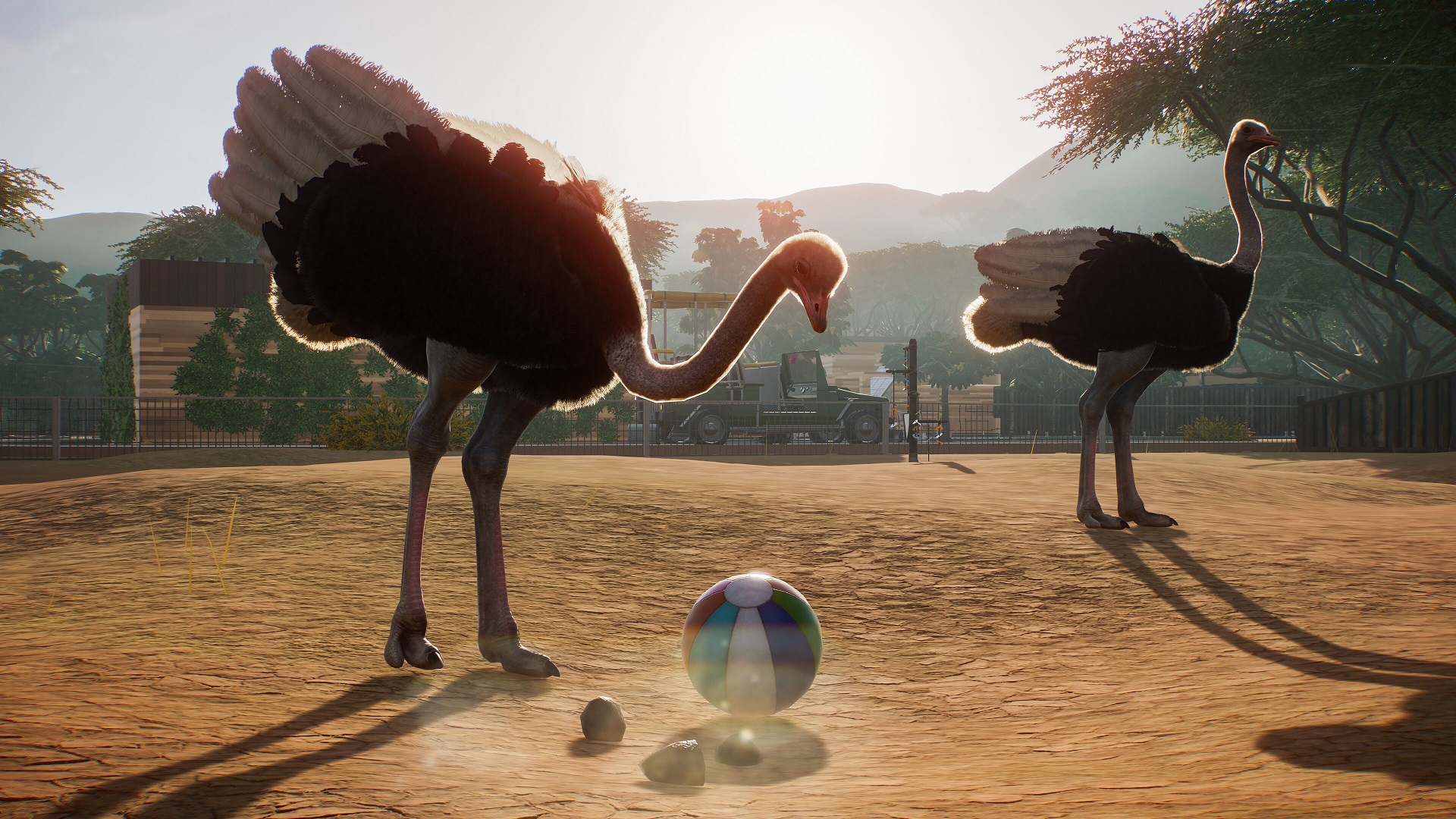 For example, each animal has their own happiness chart. In it, players can see its current state. So, let’s say a zebra is reported as being less than satisfied and is behaving in a rather unzebra-like fashion. Checking the chart will give a general overview of the situation. It’s well fed, there’s plenty of water, but it’s put off by the plantlife that isn’t native to its home and it’s freaking bored. Further investigation reveals that the birch trees scattered around the enclosure are making it uneasy. That’s simple: remove the birch trees. To handle the boredom, the player will then need to look into enrichment items. Does it need food enrichment, such as some sort of specialized feeder to make it work for its chow, or does it need some toys to play with? Is the zebra herd just plain too small? All of this information is a few clicks away, in logical places. It’s almost as though the game is trying to teach the player about how this stuff works in real life without beating them over the head with a specific diatribe.

Also heavily deserving of praise is the system for conservation. In effect, there are two currencies, cash money and Conservation Points. Cash is earned through donations, entrance fees, gift shop purchases and concessions. This is used for most everything, from building paths to paying workers. To earn more cash, the player will want to have better animals. The higher-quality specimens are purchased with Conservation Points that are earned by releasing suitable subjects in the wild. So, there’s a balancing act where the player needs to curate strong and virile examples of the creatures on display, the kind that brings the visitors to the zoo, and knowing when to set them free so that points can be earned to get new critters. This system illustrates the purpose of modern zoos and the work that they do to fight man-made extinction, and serves as an intriguing gameplay element that forces some tough decisions for helping a zoo flourish. 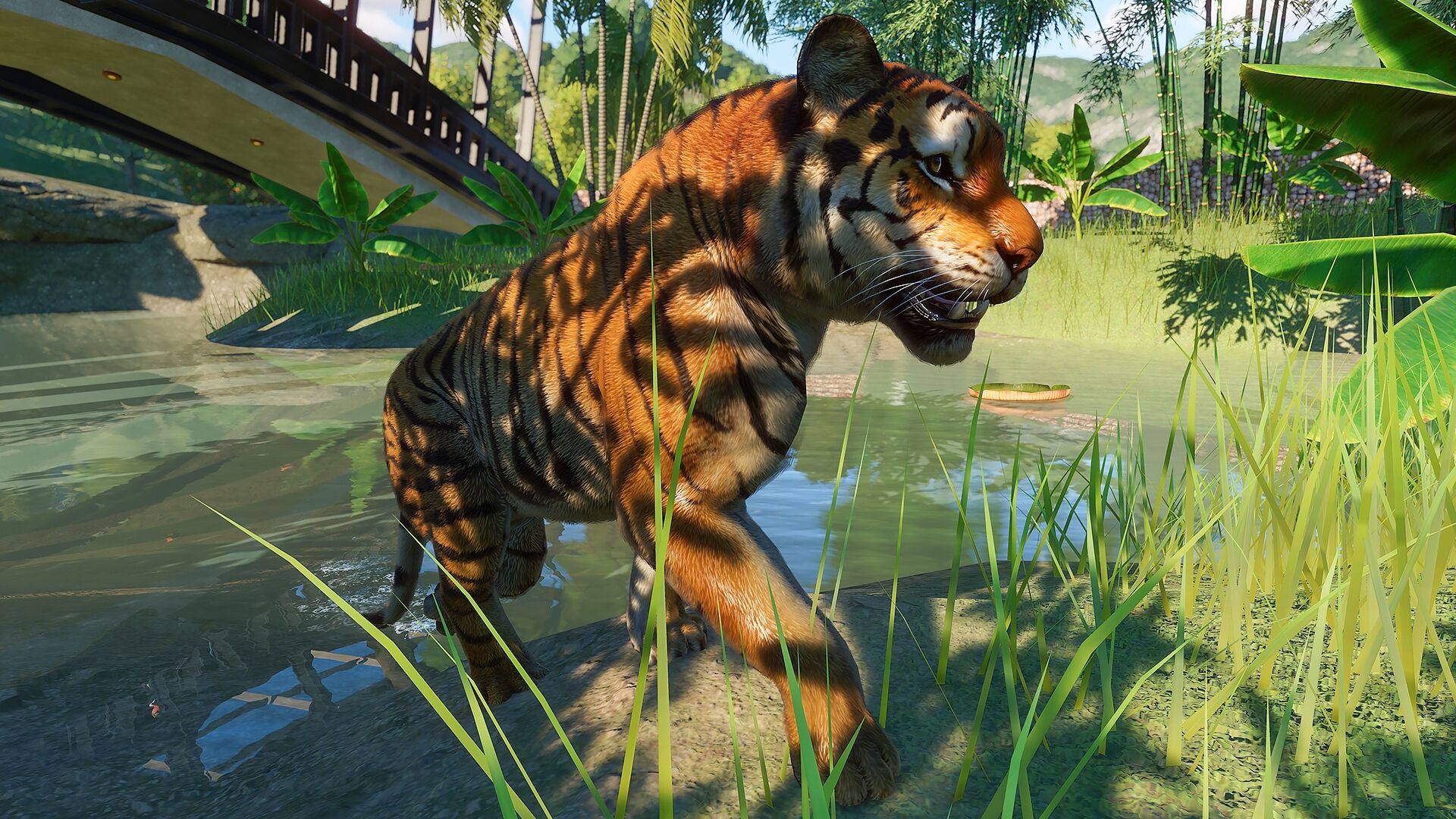 To support all of this, Frontier Developments have crafted a gorgeous-looking title. All of the humans are silly, stylized cartoon characters to that look decent. This decision was made to free up resources to put the emphasis on the real stars of the show, the animals. Each creature is loving rendered. The mud cakes on them, their fur ripples and their eyes exhibit some real personality. While it’s not the same as seeing them in person, the care that went into the graphics resulted in situations where the player is perfectly happy to just sit and watch the animals do their thing. To the best of my knowledge, their behavior sees the same level of detail, acting as they would in real life, and wreaking havoc if they aren’t properly cared for. Considering that this was running on a mid-range 1070 with 8G Ram, and the only time there was ever a frame rate hitch was when I forgot to close another intensive process before opening the game, the engine optimization is rather impressive.

While Planet Zoo is a brilliant game, it’s not without some major issues. At the time of this writing, there are real bugs, and not just the Madagascar Hissing Cockroaches. These range from small but highly noticeable, such as the hind quarters of a lioness clipping through the earth to make it look like some sort of monstrous burrowing groundcat, to scenario-breaking situations. Late in the Madagascar scenario, the player is tasked to utilize what was learned during the past two missions to build the zoo’s collection and raise the satisfaction level of the animals. For some reason, the red-ruffed lemur exhibit was constantly reported as being dirty to the point of being a disease risk. A stream of keepers being sent to clean the enclosure wasn’t making much headway. The camera filter that shows the water cleanliness showed that this looked good. To be safe, I hired a veritable army of keepers and assigned that habitat as their sole responsibility. This didn’t work. Then I hired a bunch of veterinarians. There seemed to be a clean bill of health there, so I threw them into disease research to see if there might be a solution that the zoo doesn’t know yet. Mechanics checked the water systems. Nothing indicated where the cause for the warning might be. Frustrated, I considered the theory that Andrew Wakefield had figured out how to transmogrify himself into a ring tailed lemur and was spreading debunked psuedoscience to the other lemurs, creating a health crises, but realized that lemurs don’t have money, so they can’t purchase his “alternative” products. After looking it up, it turns out that it was a bug. Best to just exit and go into another scenario. 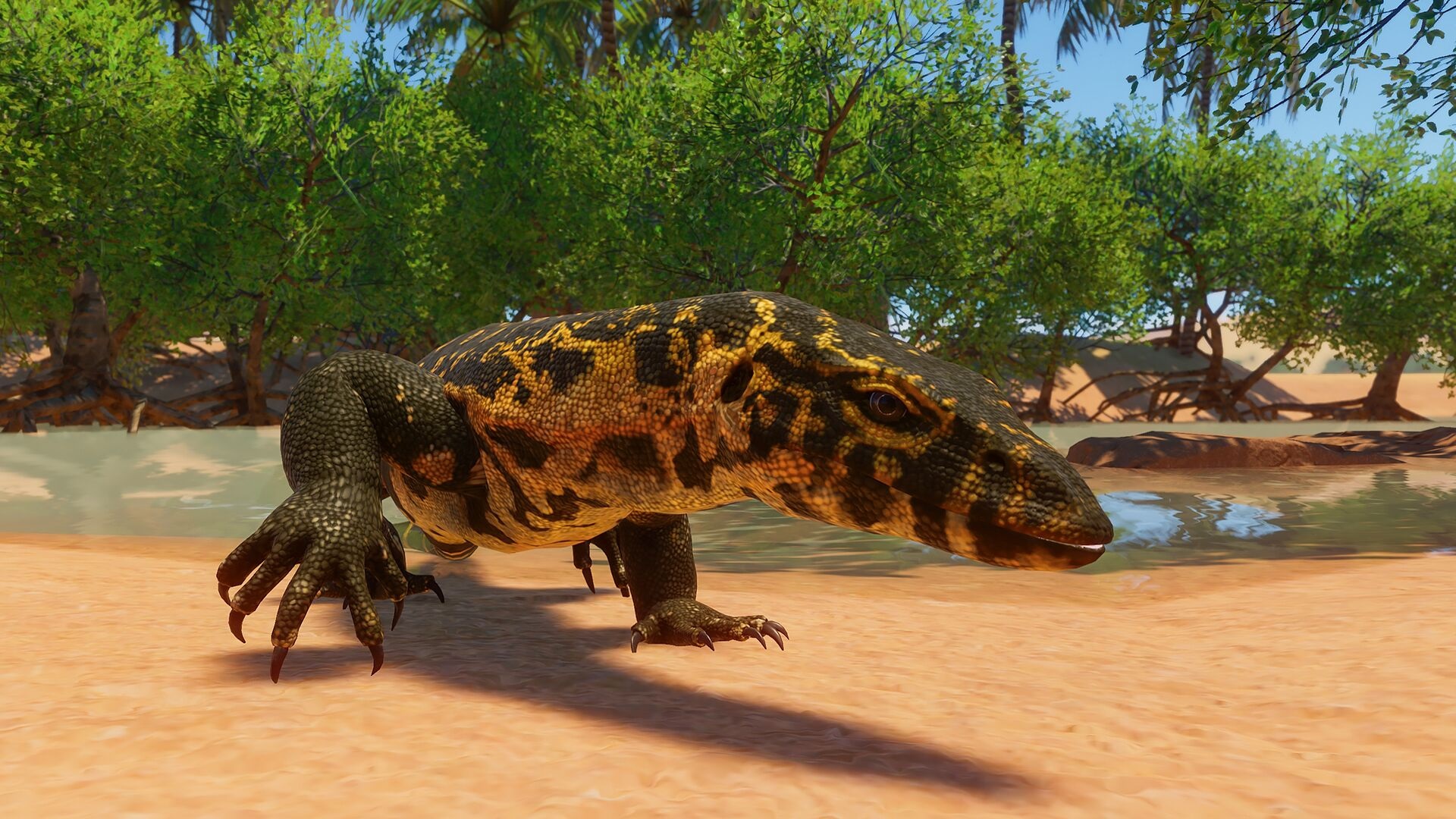 There’s also some issues with the building interface. One of the best examples was a time where I took the effort to create the outline for an enclosure exactly as I wanted it to be. Then, since the keepers in Planet Zoo don’t like walking on grass, I went to build a path to the keeper access gate. I couldn’t quite get it there. It was either too short or it went over, preventing building. Something like this has been solved in much older games. In fact, the solution is in this exact game, where a toggle can be clicked to snap an educational sign onto an exhibit without any fiddling. If there was something like this for paths, it was well hidden. Plus, there are times when things, such as an errant barrier, need to be deleted but won’t get trashed no matter which option is used to tell the game it needs to go. This latter very well could be user error. If so, an unobtrusive pop-up explaining would go a long way to alleviating frustration. It’s odd that a game with so much detail slips on a banana peel on such a basic concept.

Finally, there is the obligatory “where is this animal” speech. Frontier, my friends, how could you have left out Pallas Cats? They are snow and rock loving kitties that don’t need much space, and are absolutely adorable. Plus, they despise people, growling at onlookers with the message “I hate you for existing.” The onlookers tend to react, creating a fun exchange where the kitty feels it has established dominance and the visitors had direct interaction with a dangerous animal. They are the best animal that every any non-specialized zoo should have, but I digress. 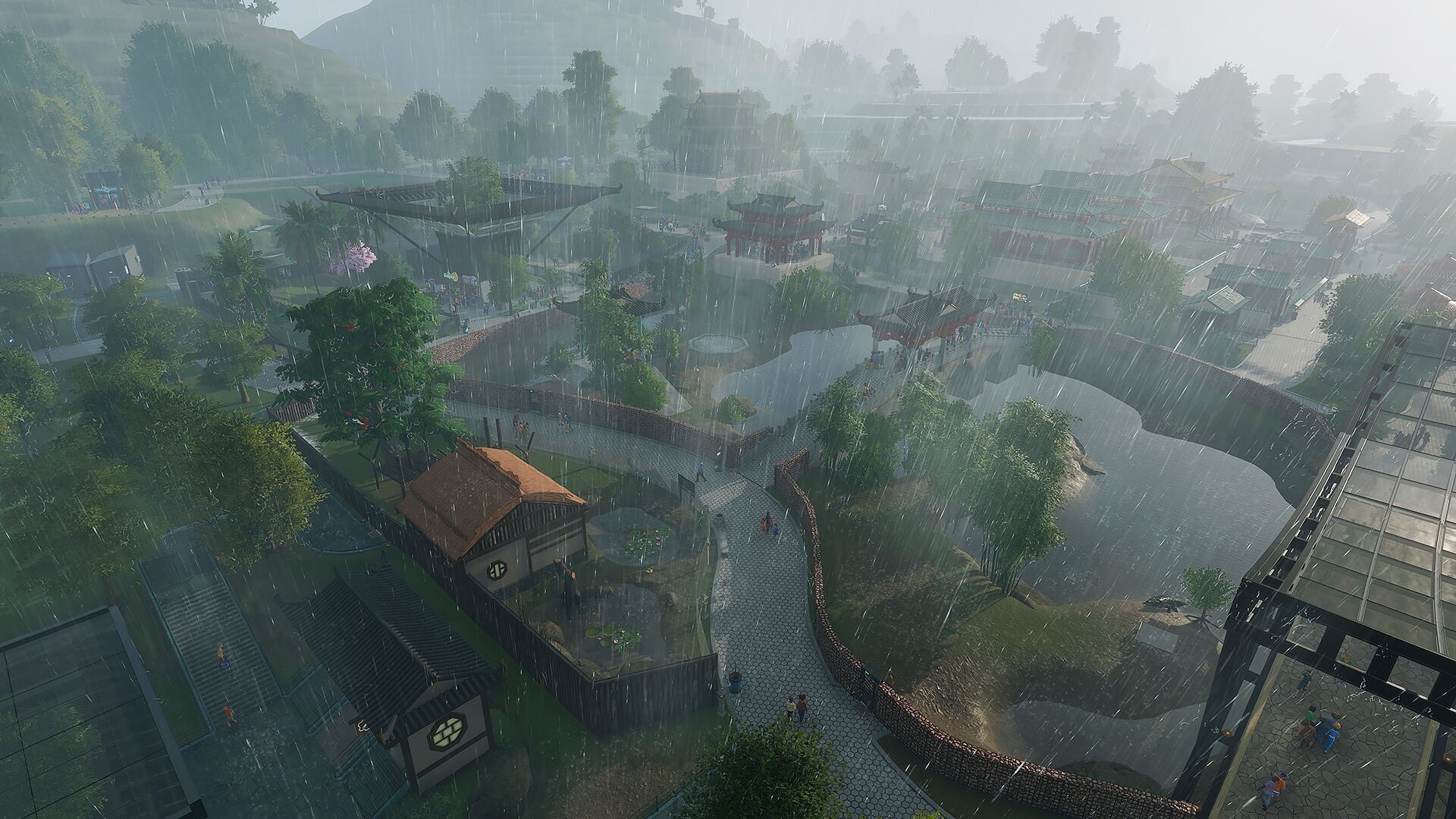 When creating a business sim that attempts to capture the subject matter, a fine line needs to be walked. It can’t get too deep in the weeds of minutia without offering real explanations, nor can it make those explanations boring. On the other hand, it can’t make it too simple, as the subject matter is a huge draw to a specific audience. Planet Zoo pulls off the act and manages to be a great time for it. Plus, people will accidentally learn about the subject matter without ever feeling like they are playing a dreaded “educational” game. There are myriad technical issues that keep the title from being perfect and some of them are biggies. Based on Frontier Developments’ track record, these will be smoothed out in the coming weeks and months. Once this is done, Planet Zoo is arguably the best of this type of game to date.