A single person alone can only accomplish so much. There are only so many hours in the day, and even if eating and sleeping weren’t necessary, time ticks by at a set rate that feels no mercy for the amount of work that needs to be done within it. A new settler on a pristine planet can either work itself to the bone for years on end or use amazing future-tech to build an army of robots. One person can’t do much, but one person and dozens of programmable bots can make a new planet a home for its pampered colonists.

Autonauts is a cute game about how simple actions can snowball into deeply-complicated systems. A lone astronaut lands on a peaceful planet with nothing but its own two hands to work with and then proceeds to turn the conveniently-flat landscape into a colonist-satisfying machine. Starting with gathering up rocks and sticks, the worker soon builds a crafting table that allows it to create tools.  Hatchets and shovels are little more than shaped rocks on sticks, not particularly durable but they get the job done, and once they’ve been built that opens up forestry.  Logs turn into planks, planks can be further divided into poles, and trees drop acorns and sticks when chopped down.  Build a pick to mine rocks and that’s six separate resources available right at the start, which is more than enough to build your first helper robot. 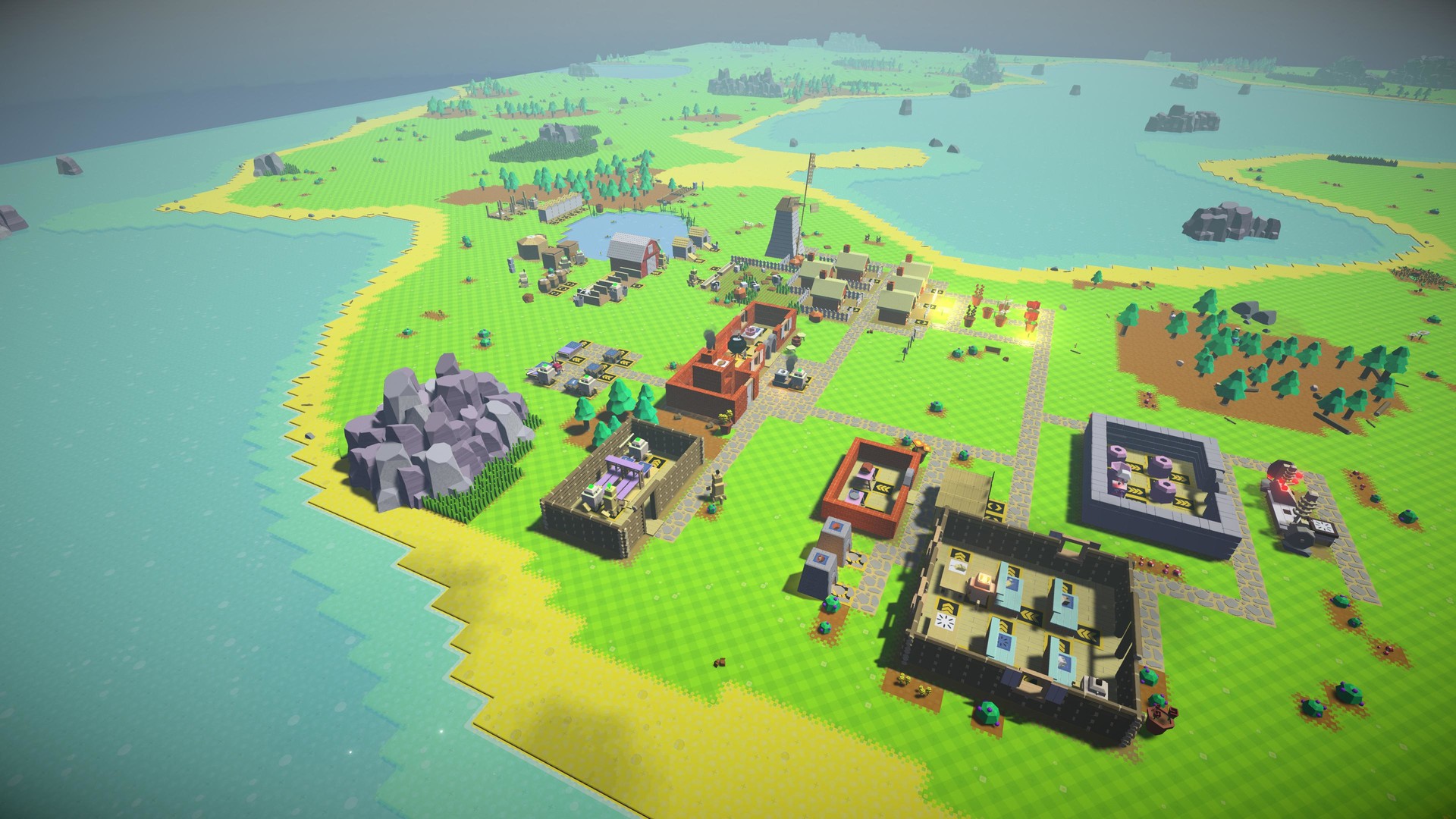 More to do than can ever be done may be part of the circle of life, but robots aren’t alive so they’re exempt from this issue.  Anything you can do a robot can do too and all it needs is the correct programming to get to work.  The very first series of bots aren’t particularly capable, seeing as they run down quickly and their memory is small so can only hold a handful of instructions, but “chop down trees in this area” doesn’t take a lot of lines.  Programming is as easy as getting a robot’s attention, hitting Record and then performing an action.  Once done you can then eliminate any extra actions you took that the bot doesn’t need to do, set a few parameters such as slapping a Repeat bracket around the “chop down tree” lines and adjusting the size of the area the robot will work in, and then it’s just a matter of hitting Play and watching it get to work.  It’s a simple, flexible process to get a bot moving, although like the best “simple” things the programming has depths that don’t become apparent until later.  For now, though, the first robot is busy and all is good with the world, until the realization sinks in that there’s far more work to do.

So, robot number two gets built to dig up the stumps, robot three gathers acorns and plants them in the holes left behind by robot two.  Robot four gathers up the logs and brings them to a pallet that you built to store them, while robots five and six patrol the area to wind up any bots that run out of energy.  This is now a mostly self-sustaining system, except for the tools wearing out, so it’s time to build crates to hold axes, shovels and picks, and six more robots divided evenly between building the three types of tools and stocking the crates.  Plus maybe another winder-bot to deal with the one supplying rocks, because it’s most likely not close enough to the trees to be covered by the ones roaming there.  It’s a good start to the new world and an efficient system that feels good to watch in action.  It also helps that Autonauts has been tossing out goals and tutorials the whole time to make learning all this an orderly, logical process. 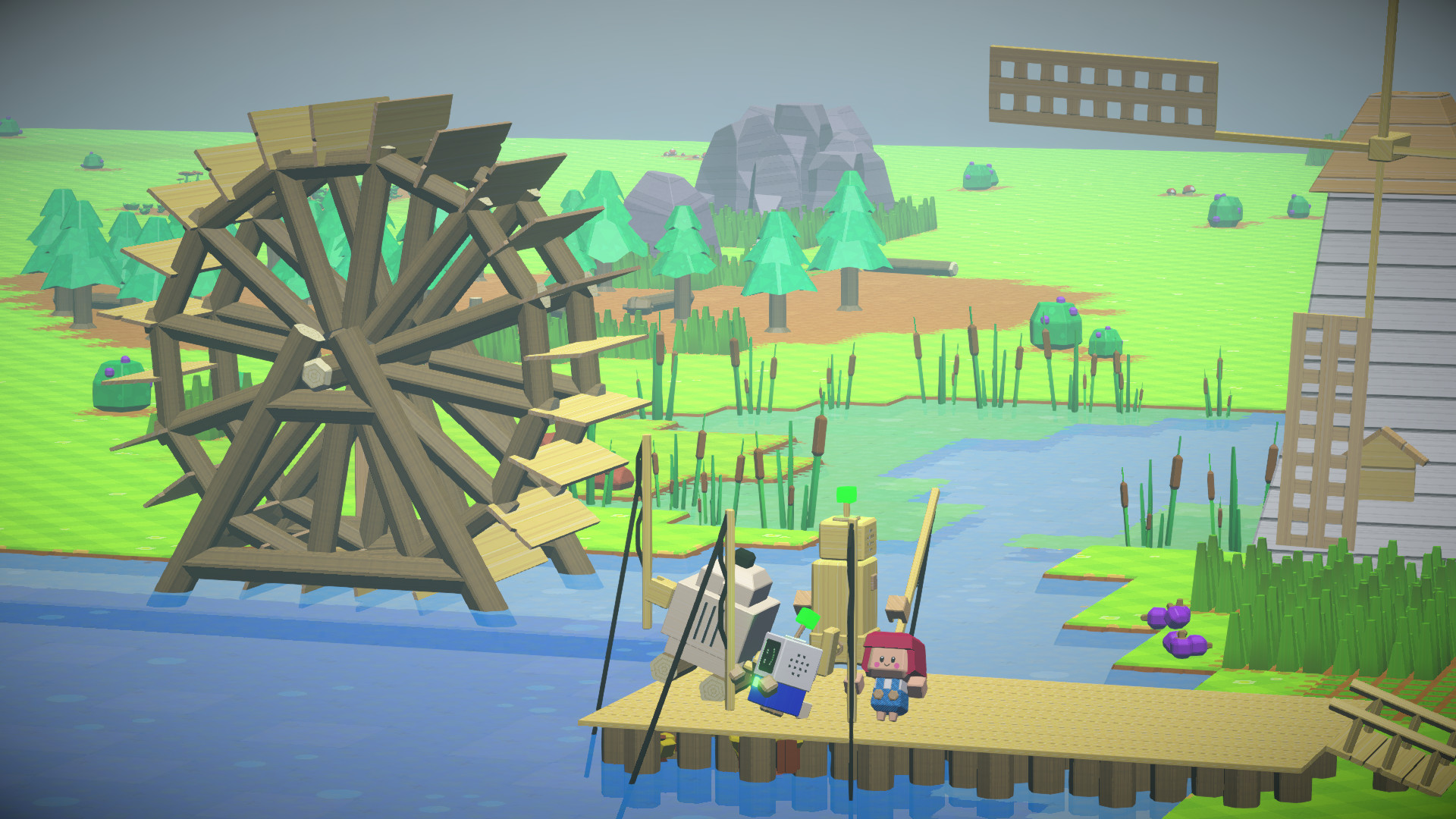 Even so, this is only the start.  You’ll want more pallets for planks and slats, stacking them three-high to fit the most items in the smallest space.  As more goals are met a few basic technologies are unlocked, leading to roads, new crafting stations, a Mark 1 robot that can take more complicated command-chains and run longer than the initial small-bots, robot upgrades for enhanced abilities and eventually colonists.  The colonists are the whole reason for building everything in the first place, after all, and while they want a lot of attention it pays off in advanced tech.  Which, of course, leads to newer, bigger crafting opportunities that need a whole new fleet of robots to build.  All while maintaining the current systems, of course, because in a game about creating processes that should take care of themselves there will always be near-constant debugging as the thing you think you told a robot to do turns out to not be quite what it was supposed to be.

While Autonauts is a cute and incredibly playable game that can worm its way into your skull and take up residence, filled with far more systems than can reasonably be covered here (food, clothing, animal care, shelter, etc.), it’s worth noting the game is a work in progress.  I got this as a reviewable and simply put this can’t be reviewed, unless it receives a 1 out of 5 for being incomplete.  The game is out, its Steam page gives no indication of the in-progress status, but Autonauts is about halfway done, maybe. Colonists, for example, start as babies and get older as they level up, which is done by you providing them with better quality food, shelter, clothing and other needs, but while there’s a chart showing progress it’s only possible to advance halfway.  Resources like coal are available but serve no purpose yet, tech like mine carts has been teased, and regular updates squash bugs while adding new features.  This would be excellent progression for an Early Access game but Autonauts is supposed to be a full-release title and that’s simply unacceptable.  While gaming does have a problem with players getting easily upset over the realities of game development, it’s a legitimate concern when a title is deceptively sold as a full release despite being nowhere near a complete product. 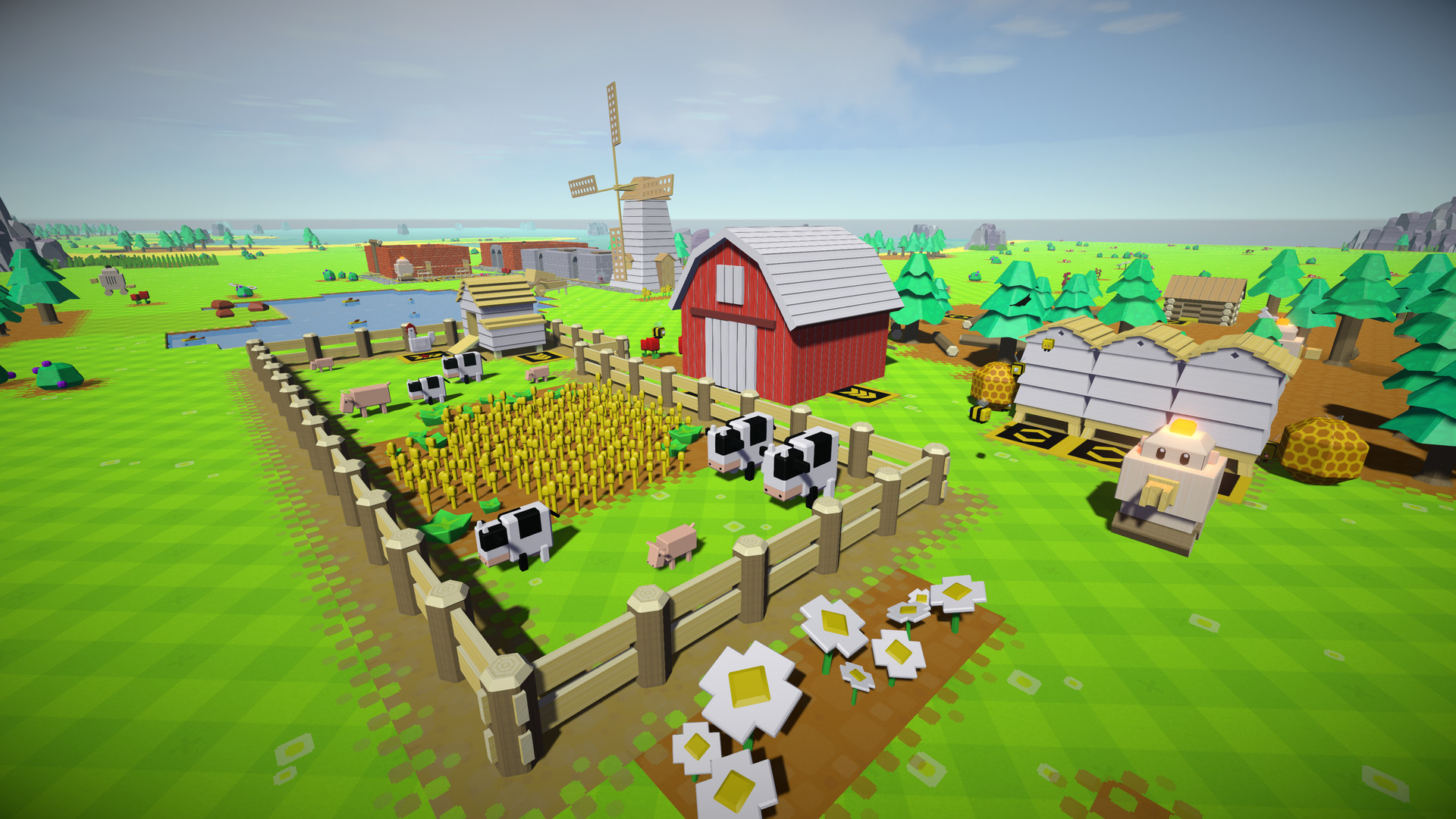 Thankfully there’s one small mitigating factor that saves the whole thing from disaster, and that’s just how fun and satisfying the huge amount of content that’s already available is.  When it’s done Autonauts is going to be a monster of a game, packed full of systems to make the costs of each new tier of technology more accessible if only you can create an efficient bot network to simplify the process.  Even now players are experimenting with the programming, finding new and clever ways to wring the greatest amount of work out of the fewest amount of lines.  It’s satisfying to build a production line, watching the bots gather berries, build houses, milk cows and perform all the tasks necessary to turn a new planet into the colonist’s paradise.  It’s a huge undertaking for a single overworked astronaut, but with an efficient mind overseeing an automated horde of robot helpers, Autonaut‘s planet can turn into a nice industrious homestead after all.