There’s a fine line between moderation and indulgence when it comes to visuals. While no one, myself included, will deny there’s a veritable degree of relevance as to a game’s graphical fidelity specifically — minus any and all artistic stride or aesthetic thread present — in the interactive medium of video games, visuals are just that: a “face” with which content is presented. A grounds to which form, shape and more importantly, interactive can emerge. As much as it may be easy pickings to focus squarely on big-budget AAA efforts — particularly, since we’re getting close to that period once more, launch/near-launch titles that often push graphical fidelity above all else — it’s vital we also put the opposite end of that spectrum under the same lens of scrutiny. The “lesser” games, the independent releases whom, artistically or thematically, prefer big, chunky, bold pixels as their defined form. If anything, it’s these games that are more likely to be more heavily scrutinized; a consequence of their bigger-budget counterparts, in a world where HDR, ray-tracing and such are the go-to buzz-words, there’s always going to be that nagging thought, willing or otherwise, that there should be more. Not even some gracious replicating the look/feel of 8-bit/16-bit era releases — simply pandering to one’s nostalgia.

It’s easy, and understandable, to already have that thought when turning one’s attention to a game like Bleak Sword. Published by Devolver Digital no less (because what eye-catching, smaller-budget, independent title with a greater focus on gameplay, isn’t these days?), developer More8Bit’s hyper-simplified, action RPG (technically) already gets all the regular precursors going. Oh it’s one of those games: a peculiar aesthetic for the sake of a peculiar aesthetic. And if you were to go one better (or should that be worse): oh so because it primarily consists of closed-off, bite-size segments of relatively-familiar mechanics, it must have some overbearing roguelike implementation, right? Ah yes…one of those games. As much as I have sympathy for creators whom get lumped into this same generalizing perception, nor do I blame onlookers for immediately, naturally, offering skepticism. Maybe it’s the push by certain corners of the industry for a game to merely look good, as opposed to play good, that has cultivated this cynical reflex of assumptions and quick dejection. There will always be those of us fascinated with such an extreme take on visual aesthetics as Bleak Sword’s, but it’s clear not everyone demonstrates that same open-mindedness. For those of you the least bit curious as to this game’s end result, already subscribed to the Apple Arcade service or not, Bleak Sword should be on your radar. It’s brilliant. 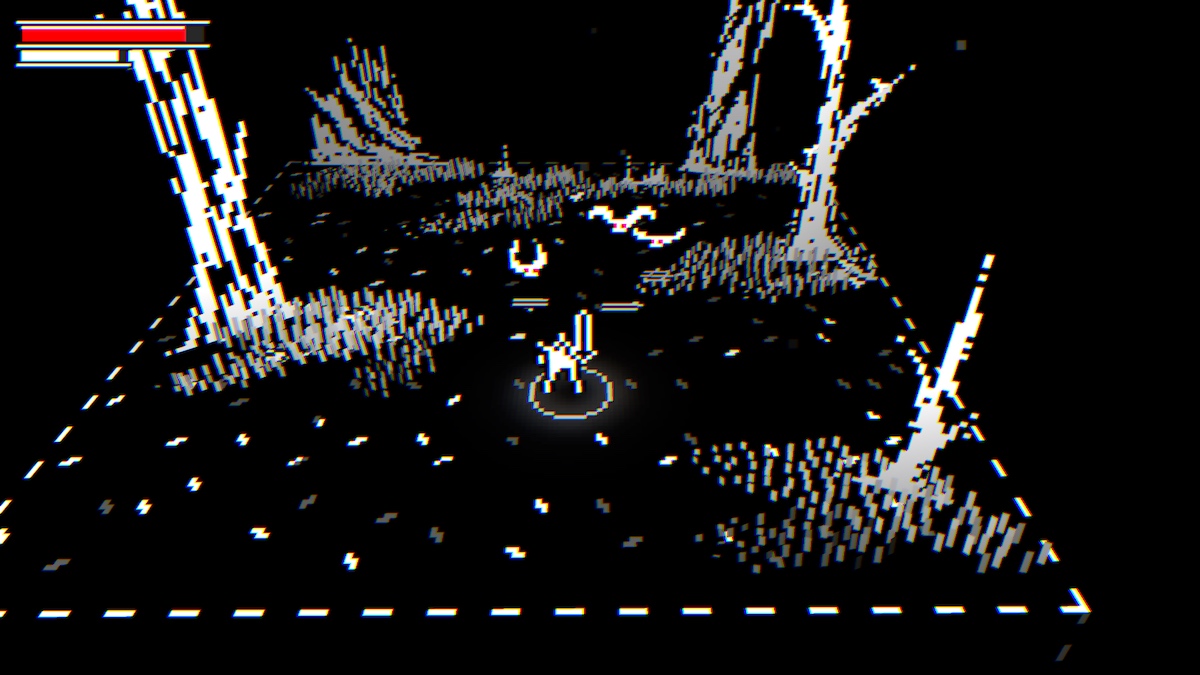 Only a few chapters into Bleak Sword’s ten-chapter, dark fantasy tale across its myriad of diorama-like, square-shaped settings, and already there are flash-backs. Games, not five years old, whose frontal minimalism hides a deeper, evocative, at the very least entertaining, core. Downwell, Pony Island; both these games, conflicted in their delivery and of their intentions they may be, are prime examples of how first impressions can not only be disproved, but subverted. Bleak Sword does both of these within the same interval. The gameplay’s primarily grueling, uncharitable loop of attack-and-defend combat, even the self-aware absurdity that is its miniaturized sprites playing out during the more cinematic cutscenes in-between worlds and prior to boss fights alike. Your hero, if this were some big-budget Hollywood production, appearing to look out towards the middle-distance…represented by no more than four, maybe five white pixels on-screen.

It’s despite the visual front put forth, where Bleak Sword deserves praise as a result. Like so many other studios/developers that don’t mistake appeasement/acceptance for success, much like the ingenious Baba Is You, Bleak Sword doesn’t simply rest at the novelty of its imagery. Instead, over its ten worlds whose stages are denoted as no more than that most classic of numeric designators (1-1, 1-2, 1-3…2-1, 2-2, 2-3 etc.), Bleak Sword offers up a pocket-size slew of mechanics that all revel in that most universal of circumstances: risk and reward. There’s a parry move that requires you to act only at the right time, there’s the very restricted space you’re dropped into — at points, restricted more so with out-of-shot enemies firing off projectiles in the near foreground — and then there’s the simple, general feeling that the monsters you must slay, aren’t mindlessly walking/flying/crawling to their doom. That this, in actuality, won’t be a walk in the park by any stretch. 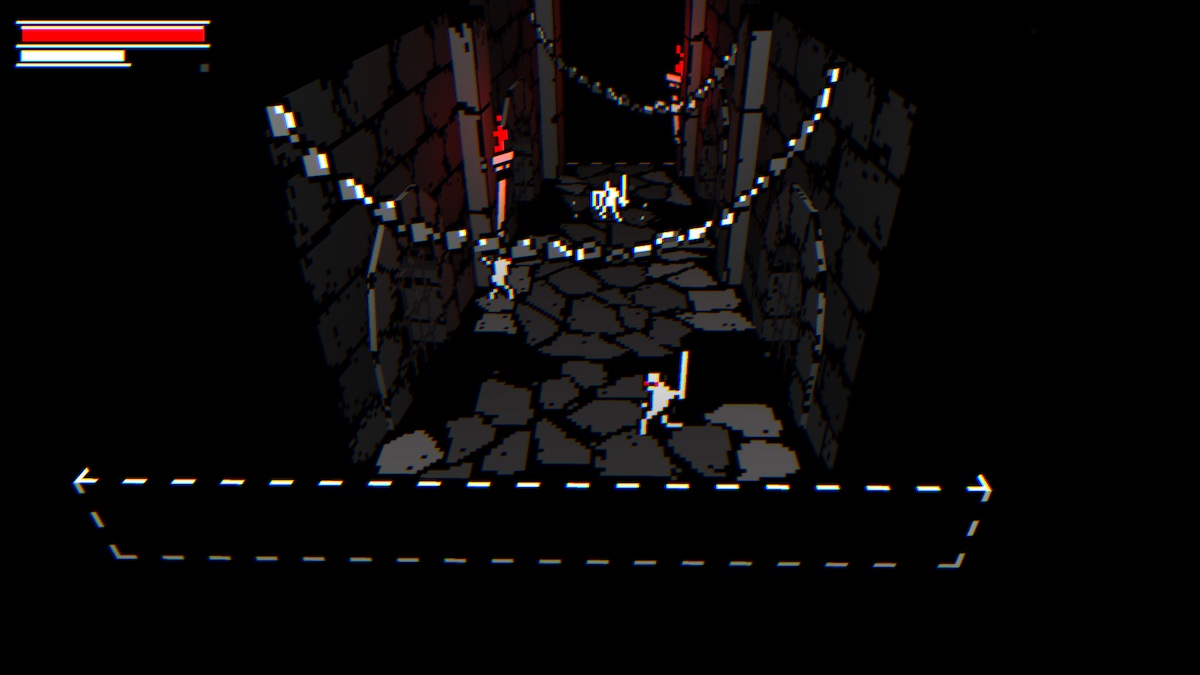 Action RPGs of course revel in that requirement to working out attack patterns — of the inevitability that you will die because of a lack of knowledge, as much a lack of skill in the moment — and for sure, Bleak Sword ticks all those boxes. Enemies that dive-bomb your position, enemies that strike from a further distance to then retreat back to safety, enemies that are only vulnerable when they themselves — exactly as you will do — commit to an attack. Again, on the surface, nothing here is original or necessarily worth highlighting…except that, in tandem with the controls, it absolutely is. Not in the sense that the mechanics provide some deeper well of potential or advanced flexibility (your move-set is essentially attack/block/parry/dodge…that’s it), rather Bleak Sword presents this, has this all played out, almost in a turn-based, strategically-minded foray.

Often feeling like it’s occupying, discovered more so, some hypothetical slip-space between turn-based and real-time combat. Of course everything is still playing out in real-time — there are no “turns” to speak of — but it’s the way the game poses such heavy importance in the moves you commit to, the choices you take, that gives the game that turn-based flair. You decided to attack and miss…now watch as you suffer the consequence of that lapse in focus. Or maybe you decided to dodge sideways…now watch as the enemy adapts and closes in on your new position. Decide simply against attacking…then the enemy will keep their distance, similarly looking for an opening to strike as well. It may feel rudimentary, annoyingly so with such an intention, but much like a game such as Dandara, there’s intrigue and joy to be had with this alternative approach to player liberty. Though present, it must always be measured rather than so passively taken for granted. 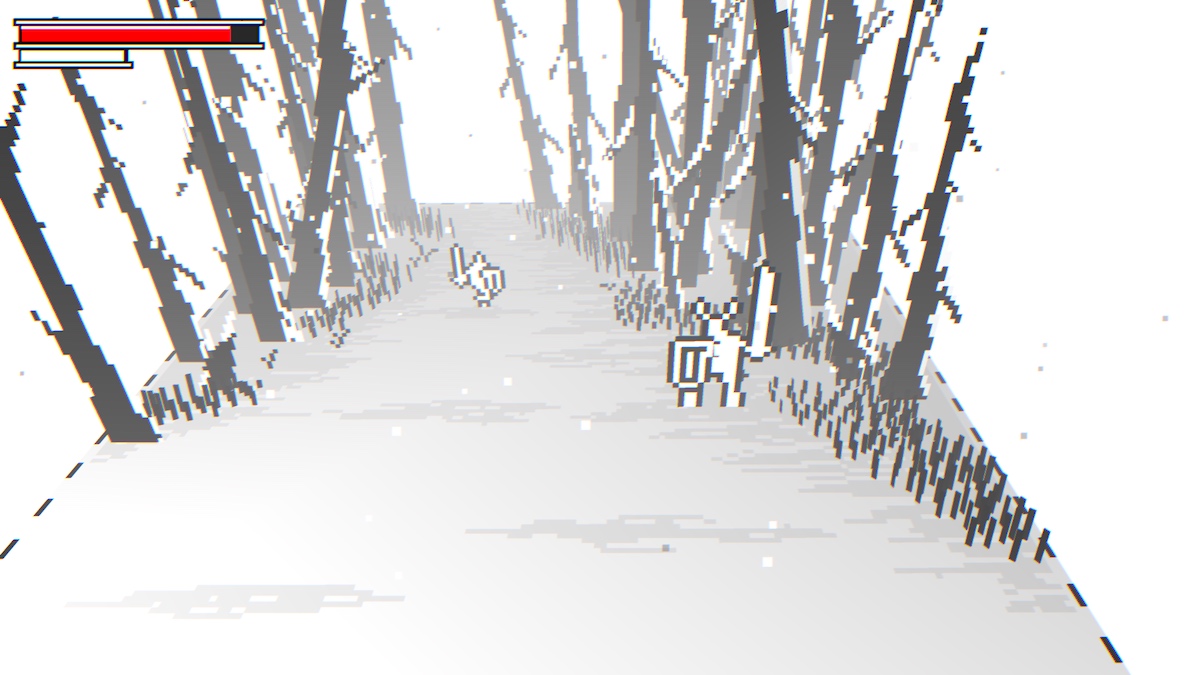 For many, Bleak Sword’s controls and pacing may seem slow, restrictive. That the game is, on some technical level, having trouble registering your every input and move. After all, the process of simply attacking requires you to hold down a button and aim in the direction you want to strike, as opposed to a simple button tap. Likewise, players must be mindful of time and positioning should they look to charge a heavier hitting attack — consumption to one’s stamina bar and all. But the key thing here is, again, in Bleak Sword’s interpretation of how that attack-and-defend loop is rendered. A consequence of the mobile space this may well be, Bleak Sword’s smartphone-consigned delivery is by no means detrimental to its enjoyment. If anything, the triumph of beating a stage or slaying one of the many bosses — where picking the absolute right time to attack and dodge (most times, doing both in quick succession one after the other) is front-and-center — ends up far more gratifying. Gratifying because of how deliberately restrictive and methodical one must be in one’s movement. No longer a case of wildly spamming attacks and dodge-rolling in a fit of panic. Aided by the feeling stamina is a lot more costly here, Bleak Sword’s dance-like arranging of risk and peril makes the whole procedure feel less like beating away a slew of hollow AI sprites…and more like beating back an opponent trying every trick in the book to beat you.

The feeling only exemplifies when the game throws you into an even more restricted environment. The once square-shaped sampling of an environment, now cut in half. At times, the only playing field being a bridge or vertical corridor whereupon enemies can spawn from both ends, at the same time. When it wants to, Bleak Sword has no quarrel with throwing in an unexpected dilemma or two, yet there’s nothing to suggest that the game is (or has been) keeping to some formula or predicted sequencing of events. The elation of victory stems from many a moment as a result and it’s the way Bleak Sword dabbles in the strategic, and as mentioned, that turn-based styled mannerism of events playing out in evenly dished-out attempts to get one over the opponent. Whether it’s you the player baiting a monster to strike so that that heavier attack lands or the enemy themselves hoping you stick to that more conservative long-game so that they can easily surround you when you do eventually slip up. 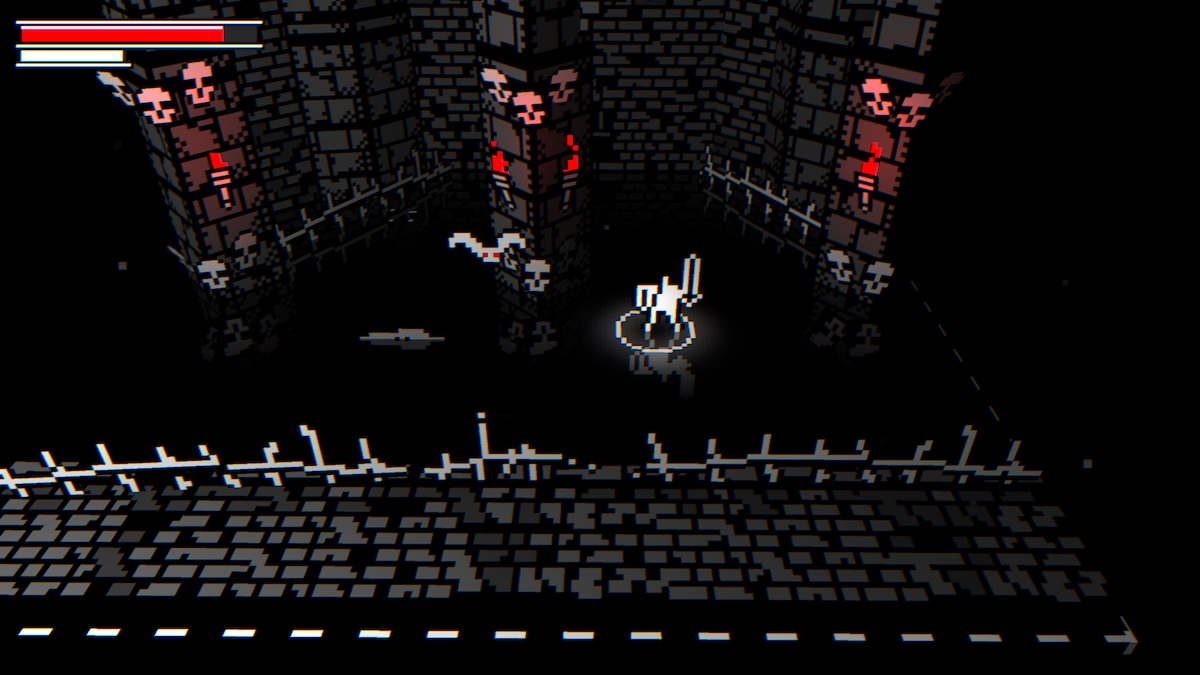 It’s remarkable just how involved, how engrossed one can be for a game whose action RPG leanings and mistakenly-unremarkable visual presentation could be regarded as the only real defining points here. But that’s precisely why Bleak Sword is such a brilliant example of how not to assume purely on face value on our end, and — on developer More8Bit’s end — how indeed one manifests the purest, most tangible kind of satisfaction in its players. Of seeing victory claimed after so many frustrating attempts. Better still, it’s nice to see a game of this delivery, this ilk, that isn’t afraid (or even embarrassed) to remark upon the absurdity of its stripped-back, minimal stylings. The idea that a cutscene meant to reflect the foreboding tone of its premise, can be comprised of little more than a few blocks of white set against a void of black. To say Bleak Sword’s self-awareness is the least of its accomplishments should prove just how fantastic an advertisement this is for the Apple Arcade service. Let’s hope More8Bit and Devolver alike decide against shackling this title down to a mere subscription model. Whatever platform or console it may hopefully come to in 2020, be on the look out for this sinister, strategic and simply well-realized rendition of action RPG gameplay that is Bleak Sword.