The Samurai Shodown reboot delivered the goods when it came to modernizing the classic Neo-Geo weapons-based fighter, but did leave people wanting more. While it was a great console experience, it was also something that seemed great on the go – and with a lot of ACA Neo-Geo games hitting the Switch including some of the best entries in the SamSho franchise, it felt like a natural fit. The Switch version will support tabletop mode – so if you want to play with a single Joycon, you can – although I would definitely recommend getting some Joycon grips for that. Those who pre-order the Switch version will get a port of Samurai Shodown 2 for the Neo-Geo Pocket Color as well. 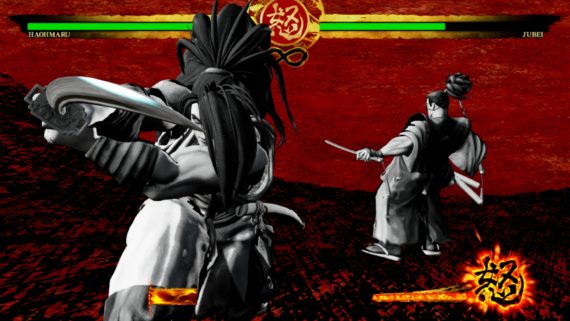 The reboot wasn’t a perfect game – but was a ton of fun and exactly what the series needed. The prior game SamSho Sen was an absolute nightmare and reeked of shovelware – and the kind that was devoid of any redeeming value. It was a black mark on the series and one that was thankfully learned from as a lot of time and effort was put into the reboot and it led to the best entry in many years. With the series on the upswing and at its greatest point in both critical acclaim and sheer availability thanks to the classic games being on every platform imaginable with ACA Neo-Geo releases, this game being put on Switch offers up the chance to greatly expand its fanbase as there aren’t a ton of high-end polygonal fighters on the platform. There doesn’t appear to be much of a loss in graphical detail too, which is probably aided by the game going for a highly-stylized visual approach and those tend to translate nicely to the Switch.