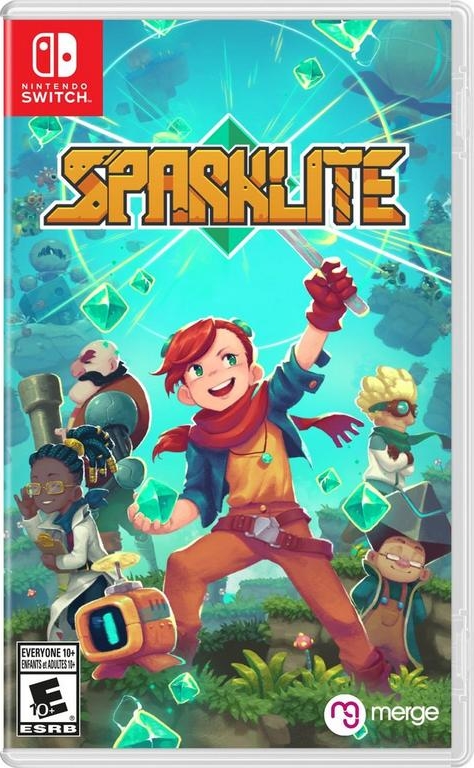 When it comes to memorable adventures, there’s often nothing better than an overhead action title about fighting through tons of enemies to get to giant bosses. Sparklite is just that kind of title, with a mix of roguelike to shake things up along the way. In appearance it reminds a lot of older SNES titles that helped define the genre, but in execution it goes its own way that gives it a unique personality while trying to help save the world. Just how well does Sparklite deliver on its adventure, and is it worth diving into this brand new indie adventure?

The story of Sparklite follows a young adventurer by the name of Ada and her robot companion. Things begin in a storm as things are going awry and their flying ship is falling apart. They set up an escape ship but someone has to stay on the button to keep it activated, so Ada is forced to go while the ship crashes with her companion on board. After crash landing below, Ada begins looking around and finds her family heirloom necklace. She discovers that this necklace can activate mysterious shrines and inside uncovers a tool that she can reverse engineer for later. After traveling further in, her journey comes to a halt when she meets a dangerous man inside a mech who defeats her in combat, but Ada is luckily rescued by a flying city above. The group of people here live above the dangerous lands that shift and change with every quake below. This can be stopped if all five sources of evil are stopped, and they’re ready to help Ada any way they can on her journey. After meeting everybody she goes back down to start her adventure again.

Sparklite is on first appearance a roguelike that will have players adventuring a constantly changing world. Ada’s main form of combat is attacking with her wrench, but over time will gain new abilities and temporary help along the way. The source of money in this world is called sparklite, and each time Ada falls in combat it will stay with her when she’s picked up by the sky city while the world below changes its layout. In the sky city she can spend it on upgrades or helping the inhabitants expand their shops to better her time. The key to getting better equipment is saving up money to get better gear and continue exploring even further. Enemies are all fun and challenging to fight at first, as Ada must learn their moves in order to take as little damage as possible in order to progress. Healing items are not common in the overworld, so getting used to enemies is a must if Ada wants to survive. Outside of simply exploring the overworld Ada will find a few different kinds of dungeons. The first is a puzzle dungeon with a new item Ada can learn how to use, which contains no enemies but challenges her to get through. The second is enemy strongholds which have deadly puzzles and enemies she will need to defeat in order to claim treasure at the end. Finally there are boss strongholds, which contain one of the five bosses Ada will need to defeat in order to progress the story and gain a new ability. The first of these rewards Ada’s robot companion who in turn will be able to assist her along her journey with his own various abilities and upgrades. There are also caverns which contain treasure she can find that will often require specific power ups in order to proceed through. 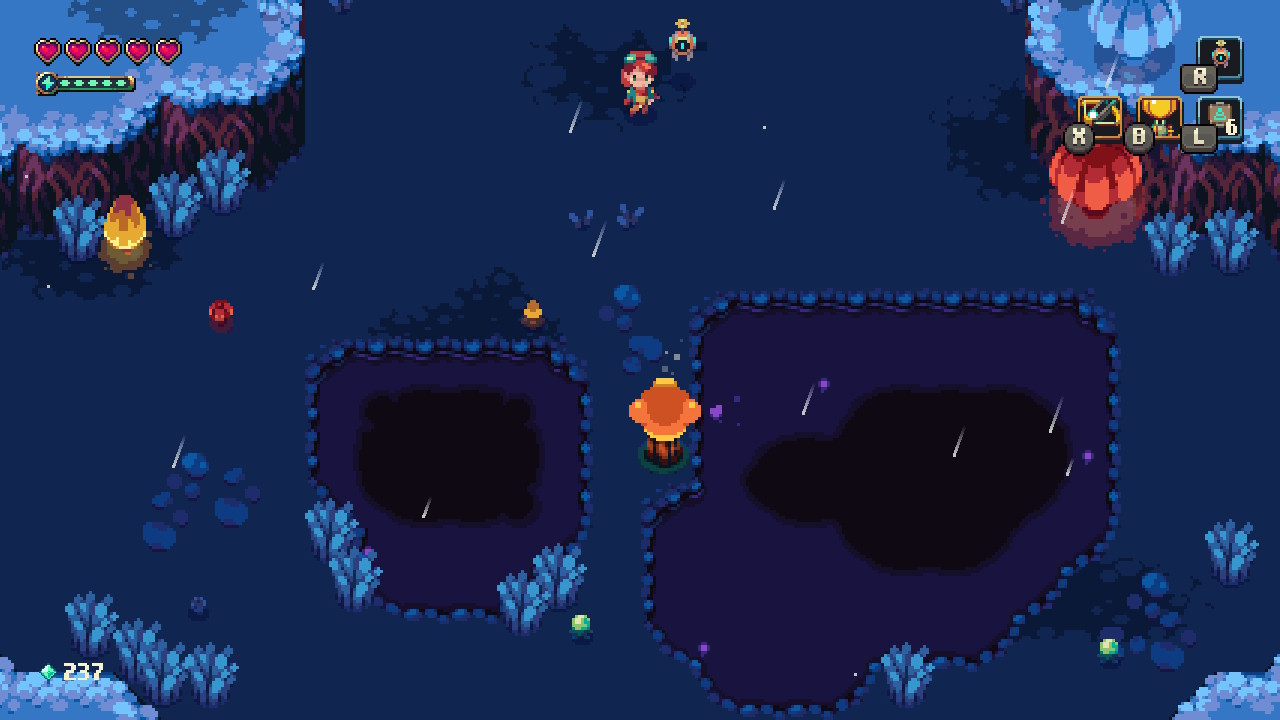 There are two main ways to make Ada stronger throughout her journey with the help of others and treasure chests. The first is temporary items that will stay until Ada falls in combat. These can give health, defense, special attacks or even speed boosts but have a temporary amount of uses. One of the people in the air city will also allow Ada to start with one of these every time she returns to ground level, but most will be found randomly while exploring along the way. The second and most important are badges. These badges can be equipped in the badge center and act as Ada’s way to gain permanent health and defense upgrades. The catch is that only a limited number of badges can be equipped. Health and Defense aren’t the only benefits either as badges can reveal maps, show boss locations and even reveal strongholds. Ada must arrange badges in a grid which can fit a minimum amount until she has upgraded it. Each badge has a different shape, so it will take come decision making to decide what will work best. Some badges can even be upgraded for a cost in order to make them better and help take up less space. Badges are truly key to making Ada more powerful as enemies only continue to get stronger, so Ada will need to be too.

The art style is Sparklite is a wonderfully detailed sprite-based world with tons of details. Enemy animals are fun to watch and they all showcase when their attacks are coming clearly for players to pick up on. The soundtrack is atmospheric by fitting the world and surroundings in a wonderful manner that makes it fun to explore. One of the biggest drawbacks for Sparklite is long load times between areas. Each big area loads individually all at once, which makes going between areas take a little bit to fully load in. This can be annoying when quickly traveling to multiple areas, especially later when more continue to be unlocked and wanting to move on to the next one right away. Long time roguelike players might also find Sparklite on the easy side when it comes to boss battles, as most of them don’t have a ton of attacks and they’re easy to avoid, but it makes it more of a welcoming challenge to those who are new to the genre. 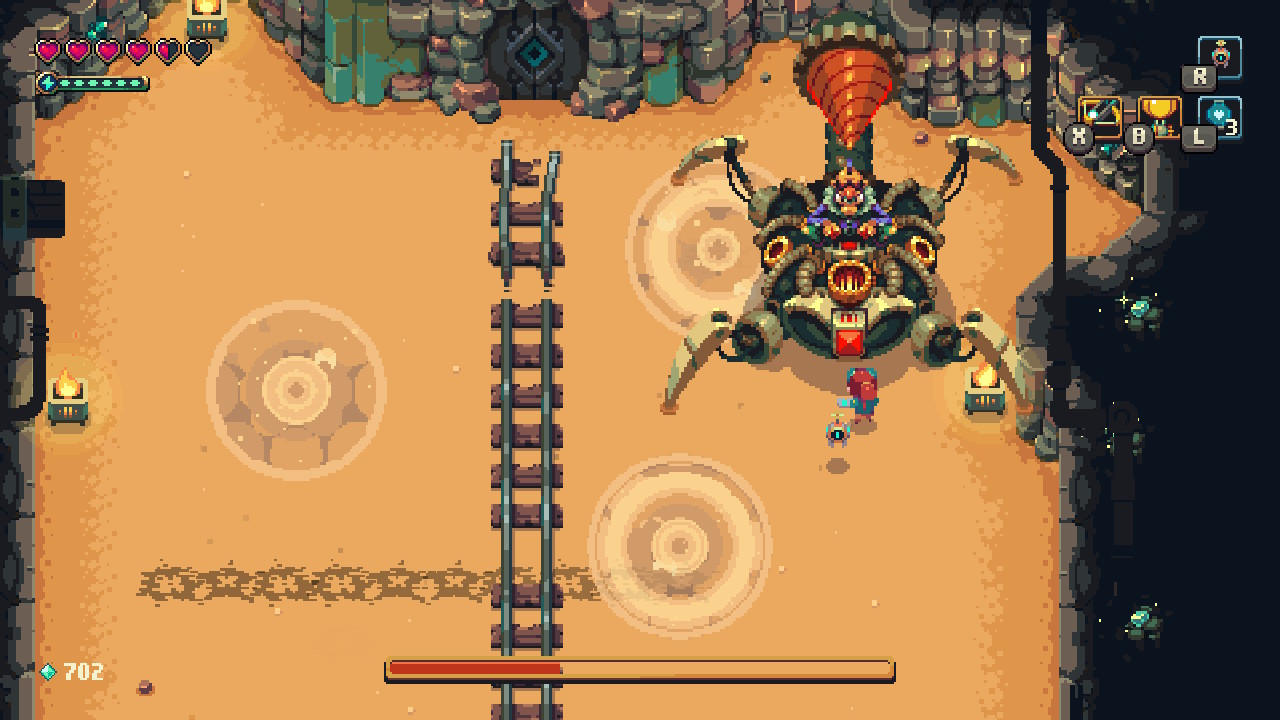 Sparklite is a wonderful adventure that may be a bit short for those who have played lots of roguelikes before, but has wonderfully unique mechanics that make it well worth trying out. It’s an absolute wonderful romp through a creatively built world that allows for players to really pick and choose how they want to take on each challenge. The loading times can drag things down a bit for extended periods of player, but the satisfaction of overcoming each challenge is rewarding every step of the way. The wonderful art style, music and general ramping challenge make it fun for those with any level of experience to really dig deep into and enjoy all it has to offer.