Super Mario Land is one of the most important games in the Super Mario franchise’s history due to its status as the first portable entry. It also played completely unlike the SMB games due to a shift in settings and directors. You aren’t in the Mushroom Kingdom and have a completely different set of stages, enemies, and different power-ups. The fire flower now gives you a giant ball to shoot that ricochets around and can do more damage overall than the fireball. Now, a new fan-crafted remake is out using original assets inspired by the New Super Mario Bros. series – but playable on an SNES. With that factor in mind, it’s amazing just how good this looks using not only that art style, but also with original animation work that is right in line with the original.

Wall jumping has been added in from the NSMB games and that changes how things feel – both for the better and worse depending on where you’re at. Sometimes, it can be a saving grace and other times it sends you into the abyss. It’s one downside to that mechanic being added to a game that wasn’t designed with it in mind. Flaws and all, it looks good, runs smoothly, and plays great – and you can enjoy it now via Archive.org now on either original hardware or a SNES emulator of your choosing. 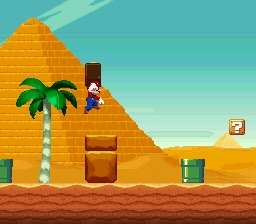