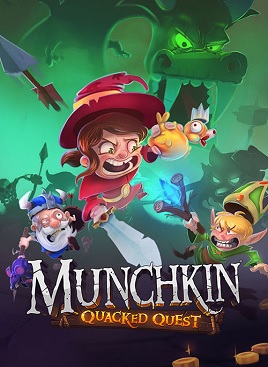 For those who haven’t had the joy of playing it yet, Munchkin is a dedicated deck card game from the good folks at Steve Jackson Games. At its most basic, it gleefully and lovingly mocks the standard RPG games. Players modify their starting characters with cards depicting a variety of races, classes, armor and accessories. They kick down doors, fight monsters, grab the loot and back stab fellow party members. This last bit is very important. While the original game takes place in a D&D-esque world, future expansions visited outer space, the Old West, the world of H.P. Lovecraft and Shakespeare, and major movie franchise universes, among others. Decks from any game can be combined, so yes, you can be a elf cowboy with a Russian accent and your pirate ship benefits from the ship modifying cards from the space version. Munchkin is an extremely popular, and much loved around these parts, game of skill and jerkery.

Munchkin: Quacked Quest is a video game adaptation of the vanilla edition of that tabletop game. Instead of digitizing the cards and relying on players to follow the honor system to not look at the screen when other players are looking that their hands, developers Asmodee Digital went in a completely different direction. Now, it is an overhead action/hack-and-slash party game that relies more on swinging the sword and breaking stuff than forethought. Imagine something like Gauntlet mixed with the Star hoarding of Mario Party and the result is kind of close. It’s not a terrible idea by any stretch, but the execution needed more work.

Before jumping into the dungeon, players will have a chance to set the time limit (five minutes to an hour), fill out the team with AI bots if needed, and select a race to dictate speed and health. Then it’s time to jump in. Before the fighting begins, a hand will dole out four cards dictating what is about to be experienced. The types of levels seen, monster types, loot type and the final boss are randomly drawn from these cards. For the duration of the time, players will compete to complete a handful of objective types in a random set of dungeon floors, earning gold, which acts as experience. Being the best at the floors objective will also grant the player a level. The idea is to be the highest level of all of the players in order to win. Just like Mario Party, victory can be cheaply stolen away at the end (this player triggered the most lines from the DM! That’s a level. He also bumbled into the most pits! That’s another level). Then, the host chooses one of two cards to add to their Dungeonarium, so that each game increases the amount of variety available. 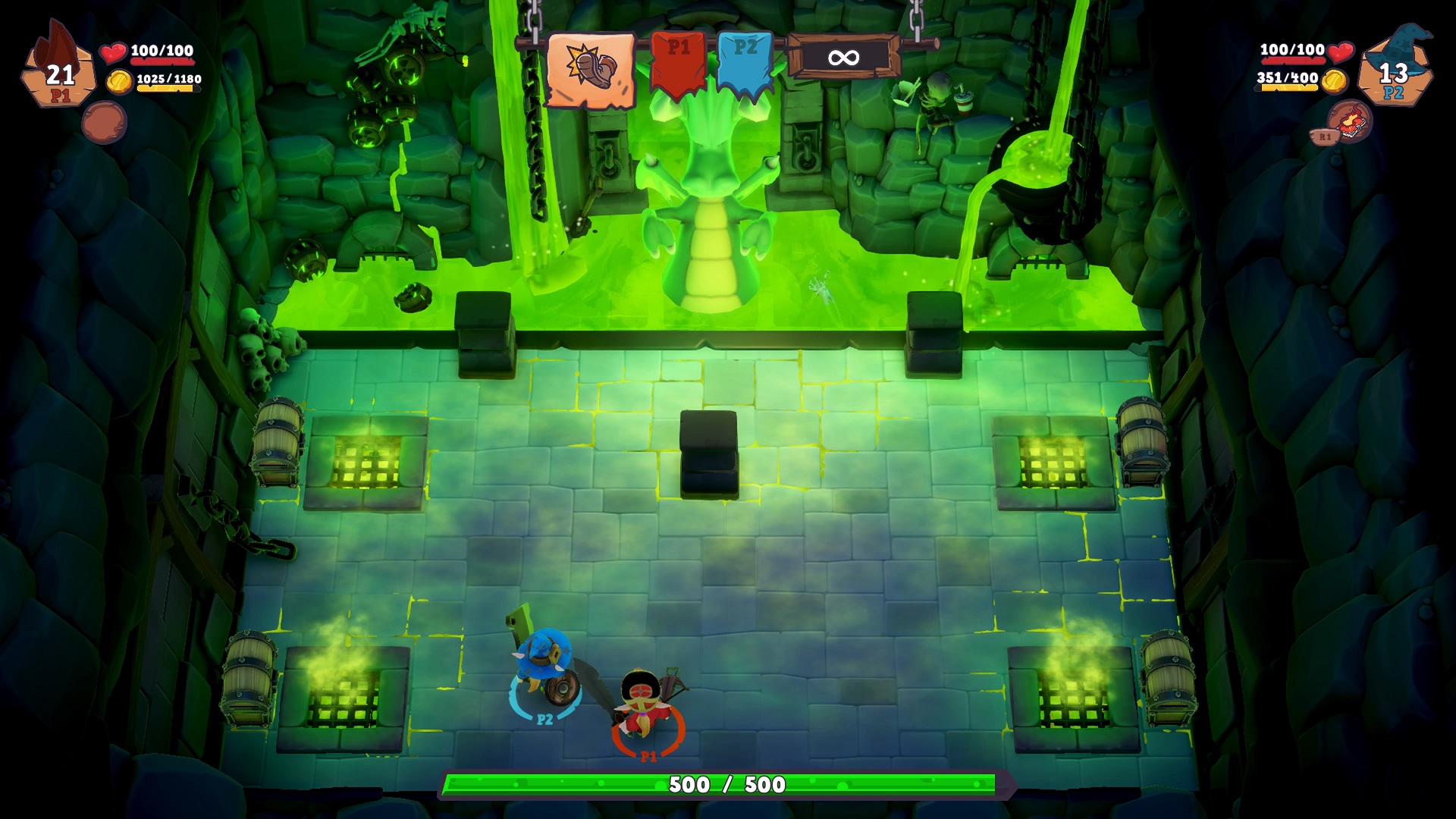 While the idea is cute, and rather smart, in practice, it falters in myriad ways. The focus on unlocking variety isn’t a terrible idea. Plenty of games have utilized this style to freshen each experience when making another run. Dead Cells and The Binding of Isaac both utilize this concept to create some fantastic, ever evolving gameplay. Sometimes, the players fight a lot of mice. Other times, it might be skeletons. This change doesn’t meaningfully alter the gameplay. The most effective way to fight still remains constant charge attacks and the occasional shield bash. The lack of variety is further hampered by the paltry amount of floor designs available. Even during a short round, groups can expect to see the same floor at least twice, which is disappointing.

Even the options that are there can be useless. Sure, the player can choose from different races, but using anyone other than the higher hit point carrying Orc or Dwarf is just kidding themselves. No matter the speed, the enemies still manage to be faster. Sure, the player might be able to briefly out run a competitor, but that distance is quickly closed with a tackle, which has the added benefit of knocking the other player briefly senseless. Hammers and daggers tend to be pointless in the face of the whirlwind attack of the sword. Even the differing classes tend not to have much meaning when the effects are short lived, and for players who don’t study the cards at the beginning of the playthrough, completely unknown. Seriously, there had to have been a way to provide a quick, short hand idea of what the equipment and skills could do beyond random guessing. Party games are meant to be easy to acclimate to and too much is obfuscated here. 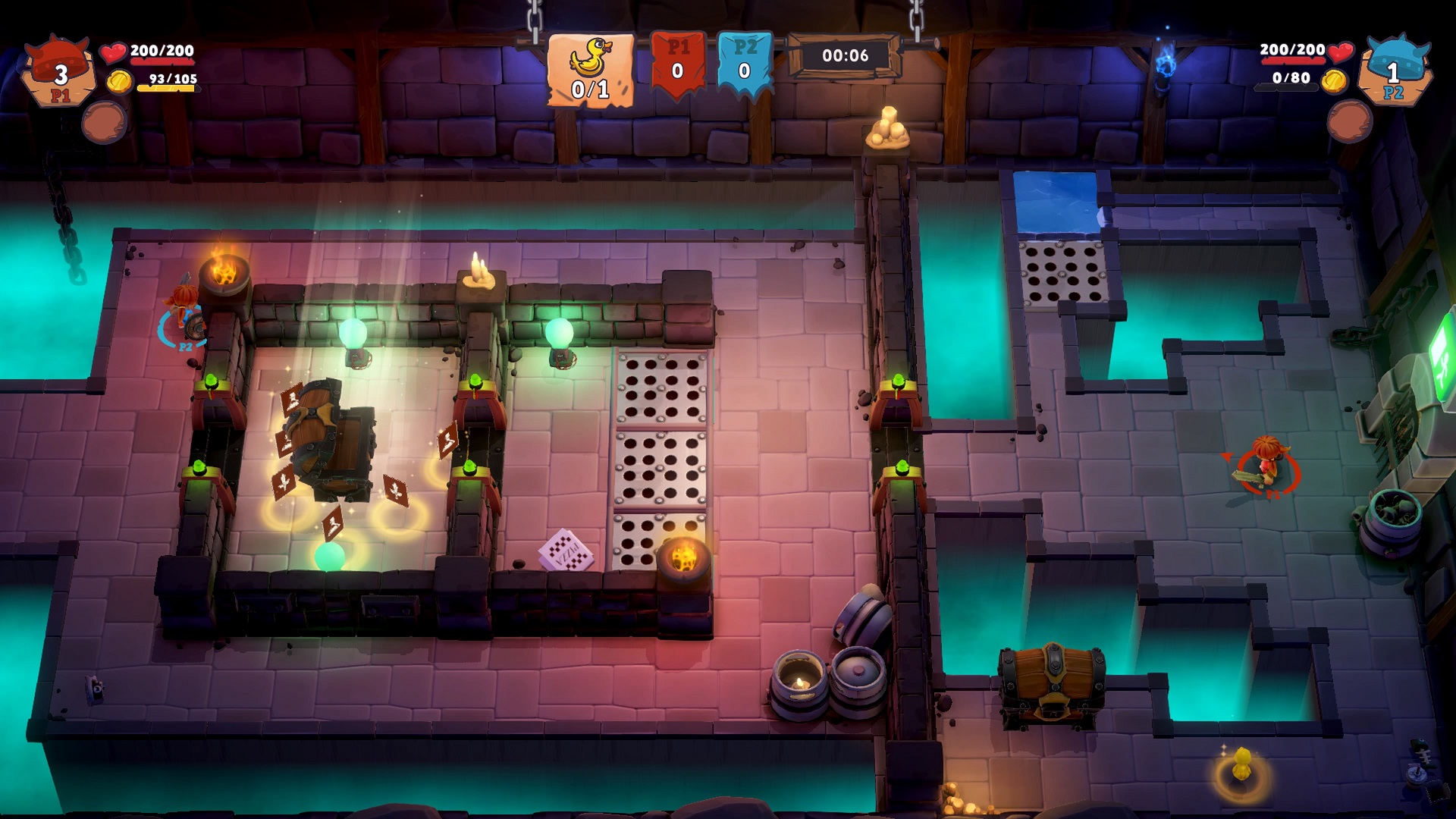 Also marring the experience is the less-than-stellar technical performance. Experienced gamers have developed a habit of flinching when the Unity logo pops up at the beginning of a new title. Unity has powered some great titles, but it’s also got more than it’s share of underlying issues that requires extremely talented programmers to side step. While Munchkin doesn’t commit some the most egregious sins possible, the are still major framerate issues, especially during bossfights where multiple things are spawning. The worst is during the BBQ Chicken boss battle, when dozens of chickens swarm the players. Environmental objects, especially barrels, have a tendency to float in midair.  The there is the input lag. In some cases, the is a full second delay between hitting the button and taking the action on screen. The only reason this isn’t unforgivable lies in the fact that everyone, except the AI, has the same handicap. That, and the unlimited lives.

Piling on the sins this game commits lies in the narrator. The board game version of Munchkin relies heavily on the humorous flavor text to set the tone. The DM, the narrator, is intended to take the place of that, since folks can actually read the cards in the dungeon, and it would destroy the pace if they could. The idea is sound. The recordings, however, sound like it was done on the mic that some random screaming YouTuber chewed on first, then it is mixed in way too loud in the sound effects hopper. It isn’t possible to turn just the narrator down. The lack of variety also rears its ugly head, with lines repeated to an absurd degree. Yes, I need a God mode when I’m getting pelted by an avalanche of slow spells and swords while having the misfortune of being stupid enough to accidentally pick the elf, a race that dies in one hit. It’s not funny the fifteenth time in thirty seconds. It wasn’t even funny the first.

While we’re discussing this game’s sense of humor, why is it that in 2019 we are still getting “the cake is a lie” jokes? Why would the developers want to remind us of a good game during the loading screen of this? Let’s put this another way: my wife is a bonafide Munchkin champion, having taken part in multiple tournaments sanctioned by the game’s creator, and coming home with a literal gold medal in one of them. She is the one who wrote the introductory paragraph explaining what the card game is. While one couldn’t describe her as an addict, she tends to snatch up Munchkin-related merchandise. She also loves fantasy based hack and slash games, playing things like Golden Axe long past after I get bored. I had to force her to play more than one round of this for review. 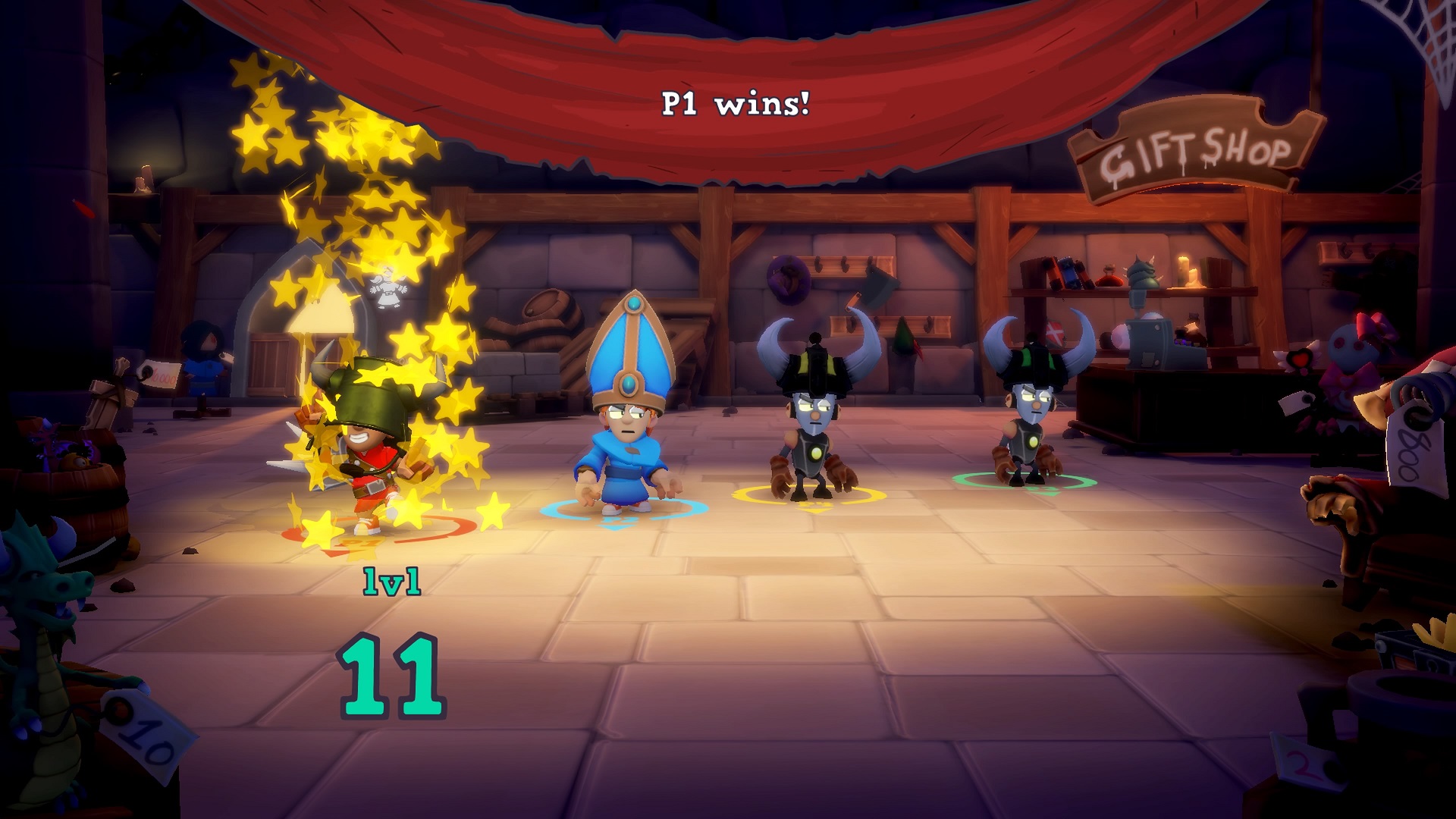 There is so much flawed with Munchkin: Quacked Quest. It’s a mess on the tech end and quickly becomes aggravating on the design end. It’s frustrating, because the idea is a really good one. With some more time in the hopper, this could have been a great way to break up Munchkin game night with a little something different while still indulging in Steve Jackson’s classic. There’s still hope for this thing to pull together with a hefty patch, but there’s no guarantee that this will happen. It’s unknown if this was the best the developer could do or if it was pushed out in advance of the holidays for desperate people looking for something to do with their families besides talk, but it isn’t quite worth the time right now.