On 11/11/11, Bethesda released The Elder Scrolls V: Skyrim for PC, PlayStation 3 and Xbox 360. Since then the game has been re-released and ported to every conceivable platform countless times, making it the most ported game of all time* that appears on more formats than any other game in history. During this time The Elder Scrolls have continued to evolve through The Elder Scrolls Online but there has been no single player title outside of the numerous incarnations of Skyrim. This is a shame, because not only would a new single player Elder Scrolls game be amazing but the other four games are worth acknowledgement. The Elder Scrolls IV: Oblivion was such a title, and while some long time Elder Scrolls fans consider it divisive with some of the modernized quality of life improvements, this was a game that was easy to sink well over 100 hours into.

Oblivion was released in early 2006 for Xbox 360 and PC, but didn’t see a release on PlayStation 3 until about a year and a half later. Released a few months after the launch of the Xbox 360 it was originally intended to be a launch title and would have been the standout title had that been the case. This is one of those games that is recommended to play for the first time on a day when you have no obligations since it is easy to get lost in the game world. Due to having a completionist mentality when it comes to gaming and the attention span of a squirrel I played several hours of Oblivion the first time I popped it in the 360 and completely neglected any relevant objective to advancing the story.

Oblivion is set in Cyrodiil six years after the events of The Elder Scrolls III: Morrowind. It’s not a sequel per se, but does take place in a new region of Tamriel with the same Elder Scrolls races and overall lore. The game begins with the character imprisoned where he’s visited by Uriel Septim VII, voiced by Patrick Stewart. The player is conveniently locked in the cell with the secret escape, so to escape the assassins the emperor enters the jail cell, pardoning the player in the process. The group escapes but unfortunately the emperor is cut down but entrusts the player with the Amulet of Kings with instructions to take it to Jauffre, grandmaster of the Blades. With Uriel’s sons slain there is no heir to the throne, and with the covenant broken portals to Oblivion have opened throughout Cyrodiil, always the demonic race of Daedra to invade. 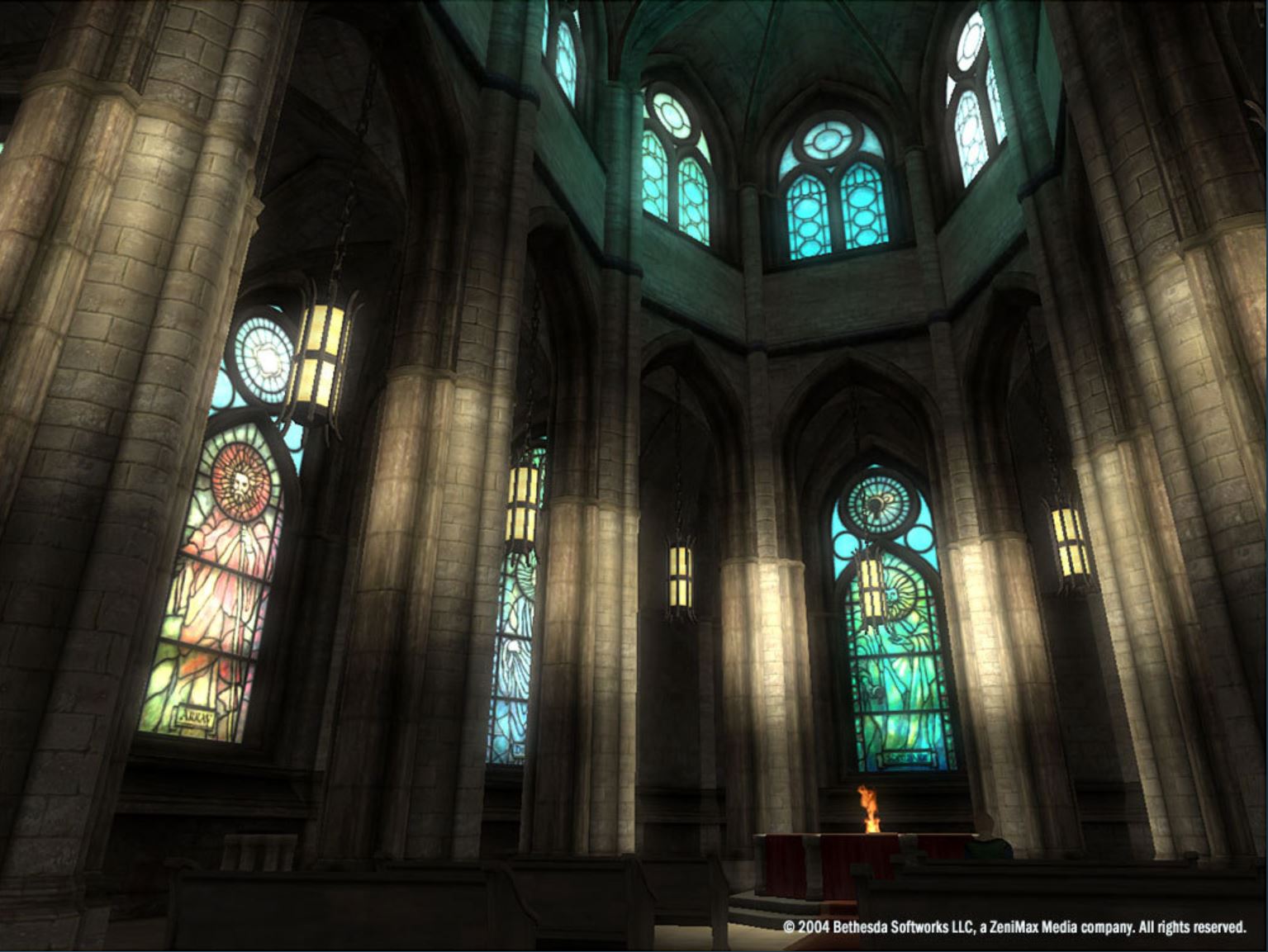 Upon completion of the introductory sequence the player is free to explore the vast game world. My experience, which I imagine was not unique to me, is I had one main quest marker that was ignored while several other side quests were collected and also ignored. Early on in the first play session I learned that kleptomania is a powerful force to contend with in Tamriel and everything was stolen, no matter how trivial in value. Books, letters, cheese wheels, random plants, clothing and just about anything else that my player could get their hands on was fair game. Most of these collectibles were lost when the guards came after me to receive justice for my crimes and the hubris of my level 3 character with no real battle equipment was no match for the town guards hellbent on collecting their debt.

Character creation and customization is a major part of Oblivion. Players can choose from a variety of races, including several human variations along with more fanciful options such as elves, orcs and khajiit. There aren’t character classes in the traditional sense but the player can select seven of 21 attributes to be considered major skills. The player gains an experience level whenever they increase their major skills by a total of ten points. The skills are divided into physical combat, stealth and magic so choose of major skills should factor into whether the player wants to play more like a fighter, rogue or wizard but there is the freedom to create a character the specializes in just about any class combination style. There are certain things players can do to cheat the system a little, such as raising their heavy armor skill by sliding the difficult to the lowest while letting mud crabs attack them while casting heal whenever their health gets too low. Increasing one’s jump skill to ridiculously high levels can also be fun since now the player can jump over houses. 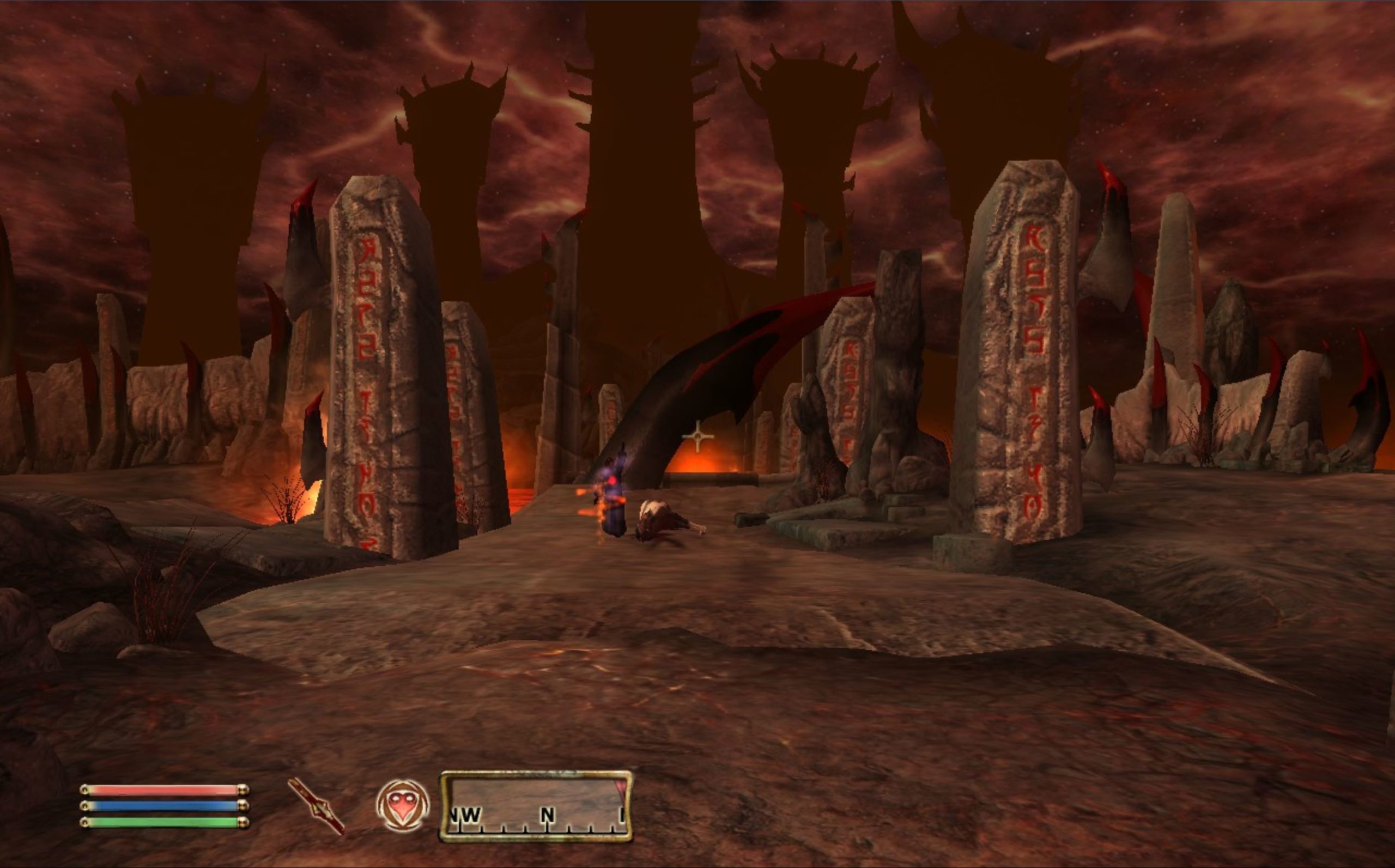 Among the vast world to explore and innumerable quests to complete, the player can become a member of various special interest clubs, such as the Dark Brotherhood or Fighter’s Guild. There are several other organizations to bond oneself to with other quests, and climbing the ranks can help the player feel like a bigger hero in the grand scheme of things in the world. If memory serves correctly rising to the top rank of every guild doesn’t really do anything as advancing the plot of the main objective but does provide hours of optional activity to do in Oblivion and get further involves in the lives of the Cyrodiil citizens. On the note of socialization, making an NPC react favorably to the player is done with an interesting speech game. The player is given dialog options in a wheel when conversing and reading the facial expression of the NPC can help predict how that particular choice will influence their feelings toward the player.

Part of the main quest in Oblivion requires, well, going into Oblivion. Oblivion is a different plane of existence, an evil place that is not too different from some popular conceptions of hell. Closing a few of the Oblivion gates is necessary to complete the main game but as the player progresses more and more Oblivion gates pop up over Cyrodiil. Most players will probably get bored of closing them and will complete the game without sealing every last gate but going into a few extra ones can be a fun and it’s a great place to experience challenging combat with Daedra and collect Daedric equipment. 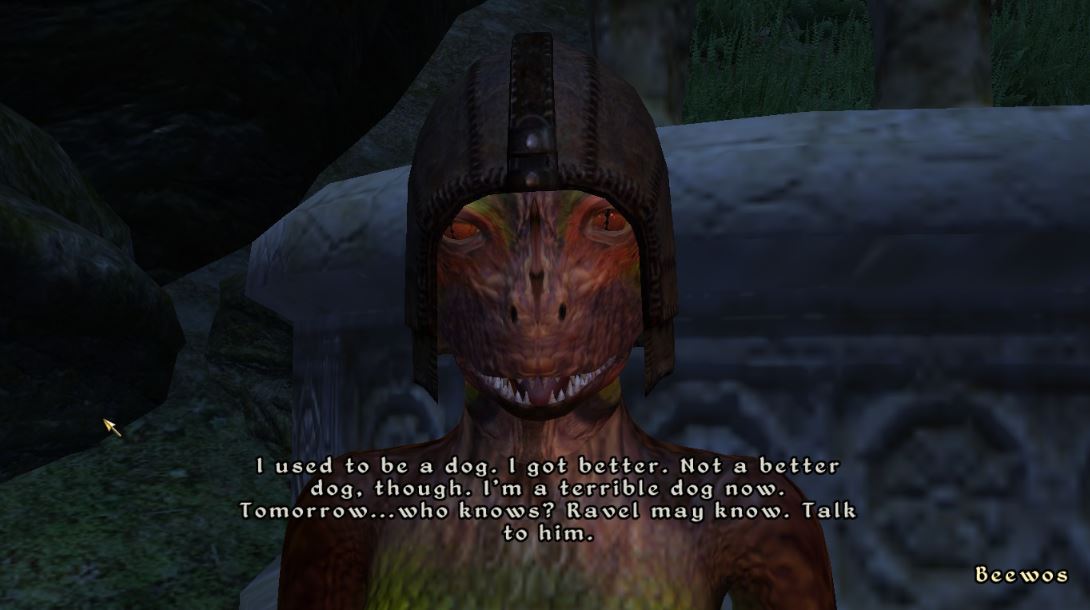 Even after sinking well over 150 hours in Oblivion it’s still possible to not have completed every quest the game has to offer. The assorted quests vary in how memorable they are, but there are couple ones that stick out even after a decade since I last played the game. One of these was a series of quests that involved shutting down a skooma operation. This quest line was done in a way that was fun to play through and seek out where the production and distribution was being handled but it was a good parallel to the world of narcotics addiction in the real world, showing that even in high fantasy settings the citizens are not immune to the problems of opioid addiction. Another memorable part was when I randomly stumbled upon a group of NPCs where none of them were wearing pants. My curiosity was piqued, so after talking them all the one constant among their nonsensical speech is they all were followers of Sheogorath, who ended up being the main focal point of the later released The Shivering Isle DLC.

Paid DLC for consoles was still relatively new and Oblivion is remembered for one of the greatest, significant and most useful pieces of DLC ever made available to consumers: Horse Armor. Actually, the opposite of that description is more accurate. This piece of digital content cost half the going rate for a chewy pretzel, or $2.49. This strictly cosmetic item went on the horse as decoration and as a somber reminder for half a pretzel that never was but would have been far more enjoyable. This was a simpler time, before the debate of whether or not loot boxes were gambling or if they devalued the precious. The horse armor will forever live on in infamy as a prime example of bad DLC. 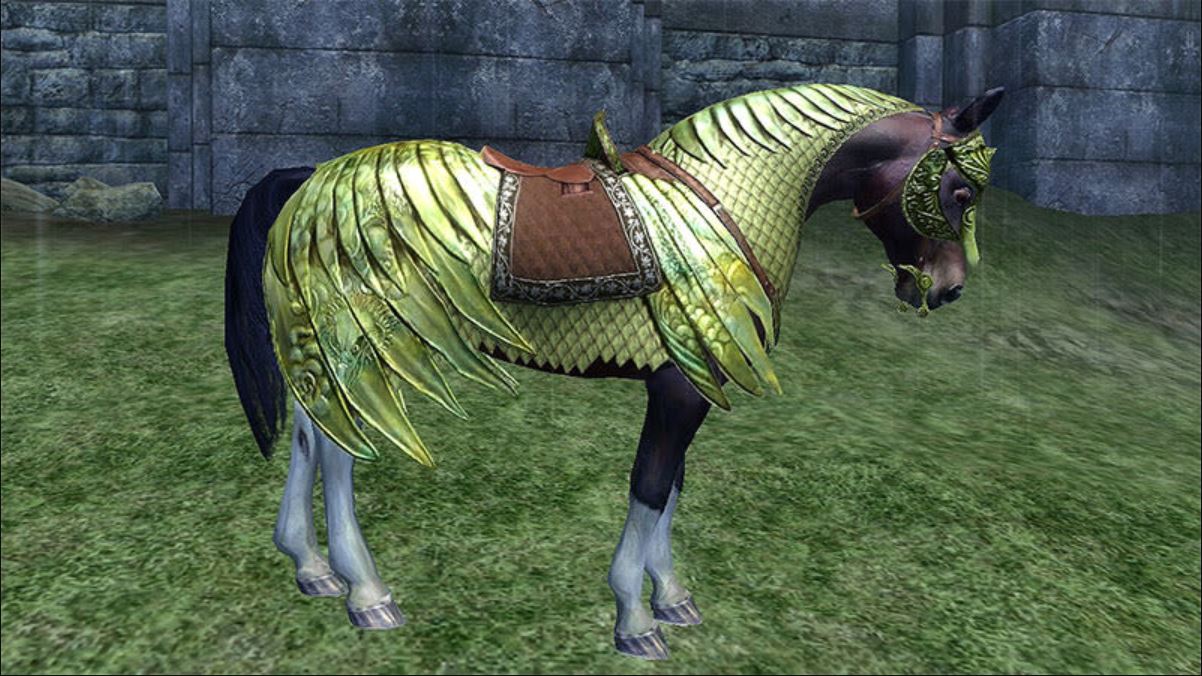 The Elder Scrolls IV: Oblivion may not be as fondly remembered and not as re-released as its successor Skyrim, but it was one of the more memorable games of 2006. It wasn’t without its flaws; the fact that enemies scaled in difficulty to match the player’s strength defeated the purpose of gaining levels, especially if the player was gaining levels quickly by making skills related to armor major skills, though that could be negated by lowering the difficulty. Elder Scrolls purists in some extreme cases denounced the fast travel system, though in this writer’s opinion that is a much appreciated quality of life time saving improvement. But even with these complaints, Oblivion is a game that can be played with hundreds of hours in a world so filled with wonder that the player will likely never run out of things to explore.

*Not a factually accurate statement.