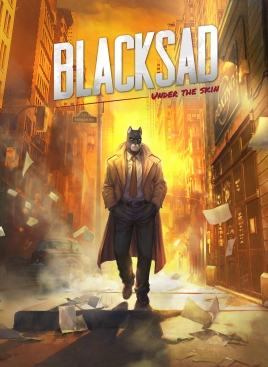 Blacksad: Under the Skin

Pendulo Studios is a developer that’s fascinated me in a certain way. In 2001, the Spanish team released their first major title, Runaway: A Road Adevnture, which was a point-and-click adventure game. It wouldn’t be until 2003 when in was released in North America, though, and by this point everyone here had considered the genre dead. Yet here was this developer still committed to it, still working on putting out graphic adventure games, despite potentially coming off as behind the times.

And now, in an era where traditional adventure games have made a comeback, here they are with Blacksad: Under the Skin, a game modeled more after modern adventures like The Walking Dead with its third-person controls, branching narrative, QTEs, emphasis on dialogue and more. Just as that subgenre has taken a heavy hit with Telltale’s fallout, again arguably leaving Pendulo behind the times. But if they could make interesting (if flawed) point-and-click adventure games, clearly they can do the same for a different breed of them, right?

Blacksad is based on the Eisner Award-winning Spanish comic of the same name, a film noir-inspired series set in a version of 1950s New York populated by anthropomorphic animals. The plot involves our titular hard-boiled feline private detective John Blacksad as he’s hired to investigate the disappearance of a prize fighter right before a big match and right after their manager seemingly committed suicide. Of course, as is expected for the genre, things aren’t as they appear, twists and turns are taken, and Blacksad soon discovers that there may be something larger going on here. 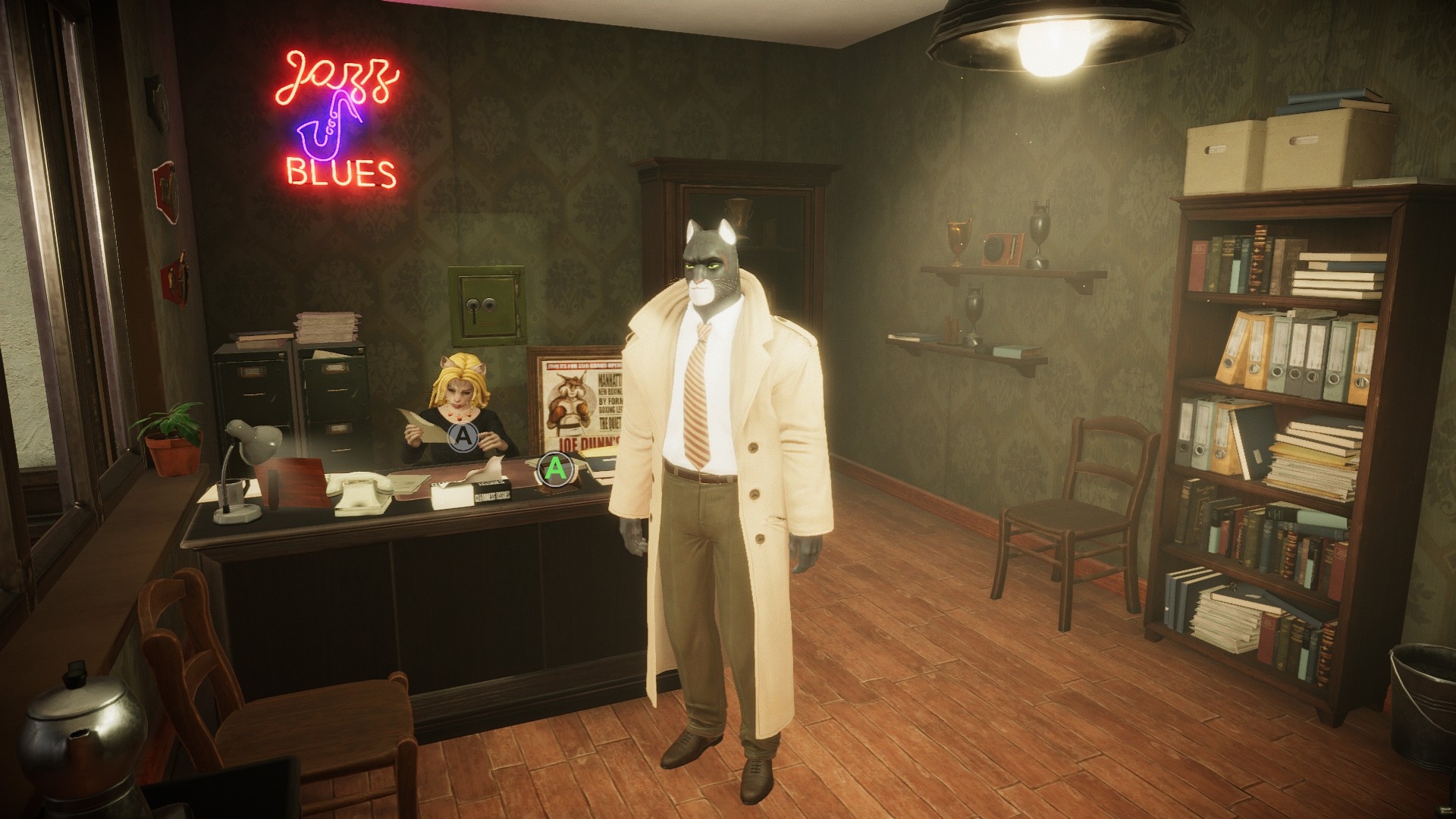 And I have to have to say that after diving into this tale, Blacksad impressed me. It started out with a QTE as you tackle an angry rhino you’re investigating, leading to the first big moral choice, establishing everything in a bit of a quick tutorial. Then I began the investigation proper, hunting for various clues and talking with people, as Blacksad made sure to take notes. And a lot of potential suspects were lined up, creating the basis for a good mystery. Then I had to leave for a moment, so I quit after an auto-save happened after a conversation. And then when I continued the game, the camera was permanently locked in a position as if the conversation were still happening, not allowing me to leave it, no matter how many times I reloaded.

And thus, Blacksad had impressed me. For I have been a professional game critic for over six years now, and as I can recall, not once during that time have I encountered a bug in any game which I reviewed that forced me to start all over. But Blacksad was the one that accomplished what no other game could in terms of performance.

I’m just going to make this clear right now: I cannot recommend Blacksad in its current state. It is way too much of a mess in the technical department and errors can keep getting in the way. Let me try and run down the list of what I had experienced: there was your standard clipping, a section where the graphics were stuck in black and white after a transition, bits of dialogue that were missing, QTEs that would actually speed up every time afterwards if you failed them the first time, notebook entries replaced with “ENTRY NOT FOUND,” one part where a QTE wouldn’t work at all and eventually froze the game, subtitles getting disabled on separate occasions…it goes on like that. Now, I could deal with one, maybe two of those errors being an accident, but I can’t ignore a list like that. 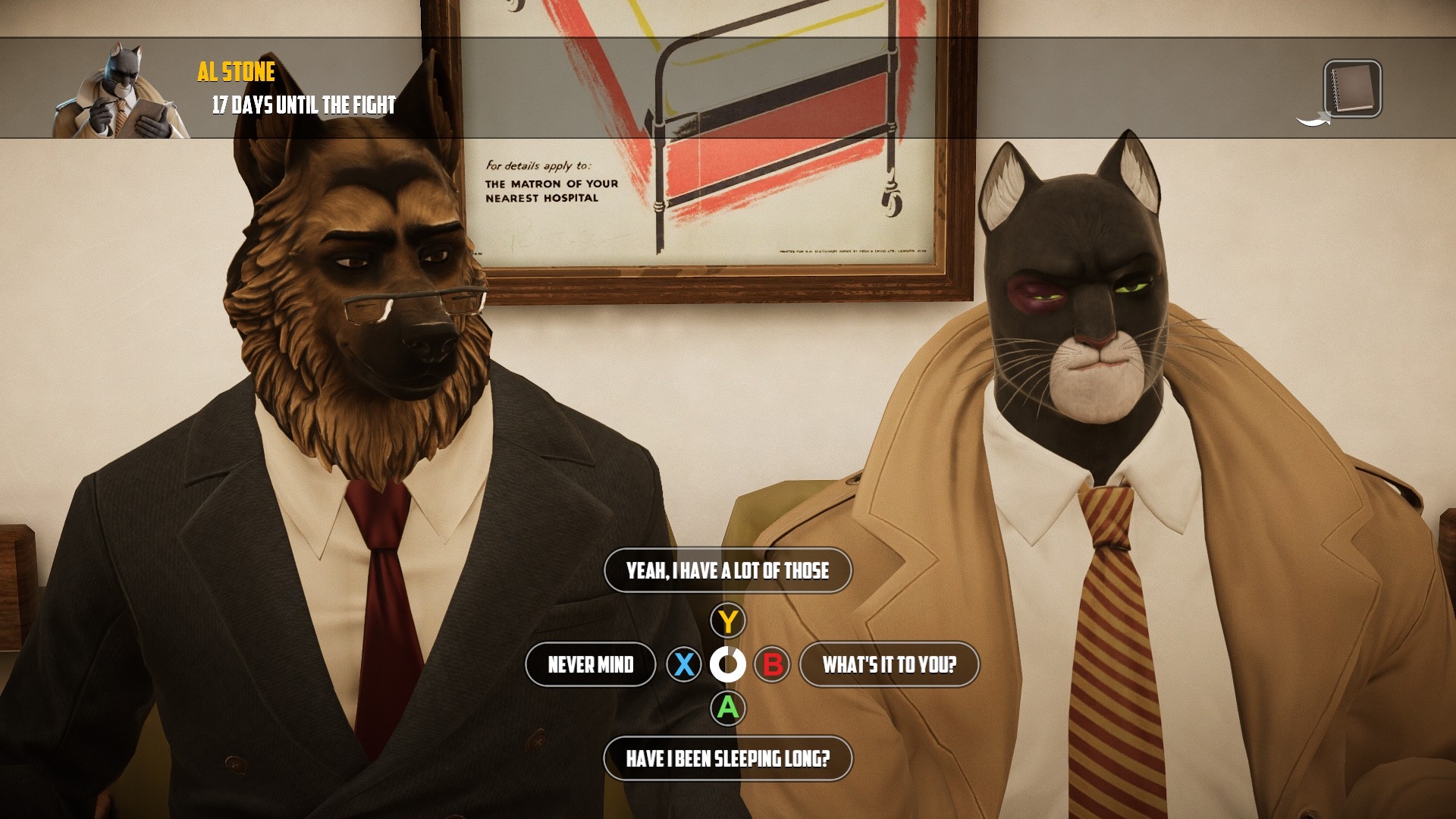 I wish I could say that Blacksad’s bugs were its only flaw, but alas, it also falters a bit in the gameplay department as well. The main issue that springs to mind here is that searching for clues and objects to interact with can require some of the most blatant pixel hunting I’ve seen, the type that would make an ’80s Sierra game blush with envy. Well, I suppose it’s more “hotspot hunting” than pixel hunting, but the game requires you to have Blacksad stand in extremely specific positions at times, regardless of how big the object is that you wish to interact with.

I spent at least five minutes trying to interact with an obviously visible pair of boots beneath a bed because every time I tried to get near them, the prompt would appear for a split second before disappearing as Blacksad’s walk animation finished. It was so bad that one fellow critic had stopped playing after a particularly frustrating timed moment in a darkened basement where you need to find a light source, almost writing it off as another bug. And I was ready to do the same, but then I happened to stumble across a non-visible flashlight high above a shelf in that area. Just awful pixel hunting like that throughout.

Beyond that, there are also some issues with how the investigation proceeds. I don’t know if it’s just another bug or not, but more than a few times, the game would alert me to new clues I had found before the current cutscene or bit of dialogue that actually explained what the clue was had actually finished. Blacksad’s notebook at one point even contained characters that seemingly had yet to be mentioned at all. It’s almost as if the game was too eager to get through everything. Not to mention awkward moments like one where I present a piece of jewelry to a character and explain its significance, only for the game to tell me “you failed to keep this the jewelry owner’s secret” despite never talking to them or promising any secret in the first place. 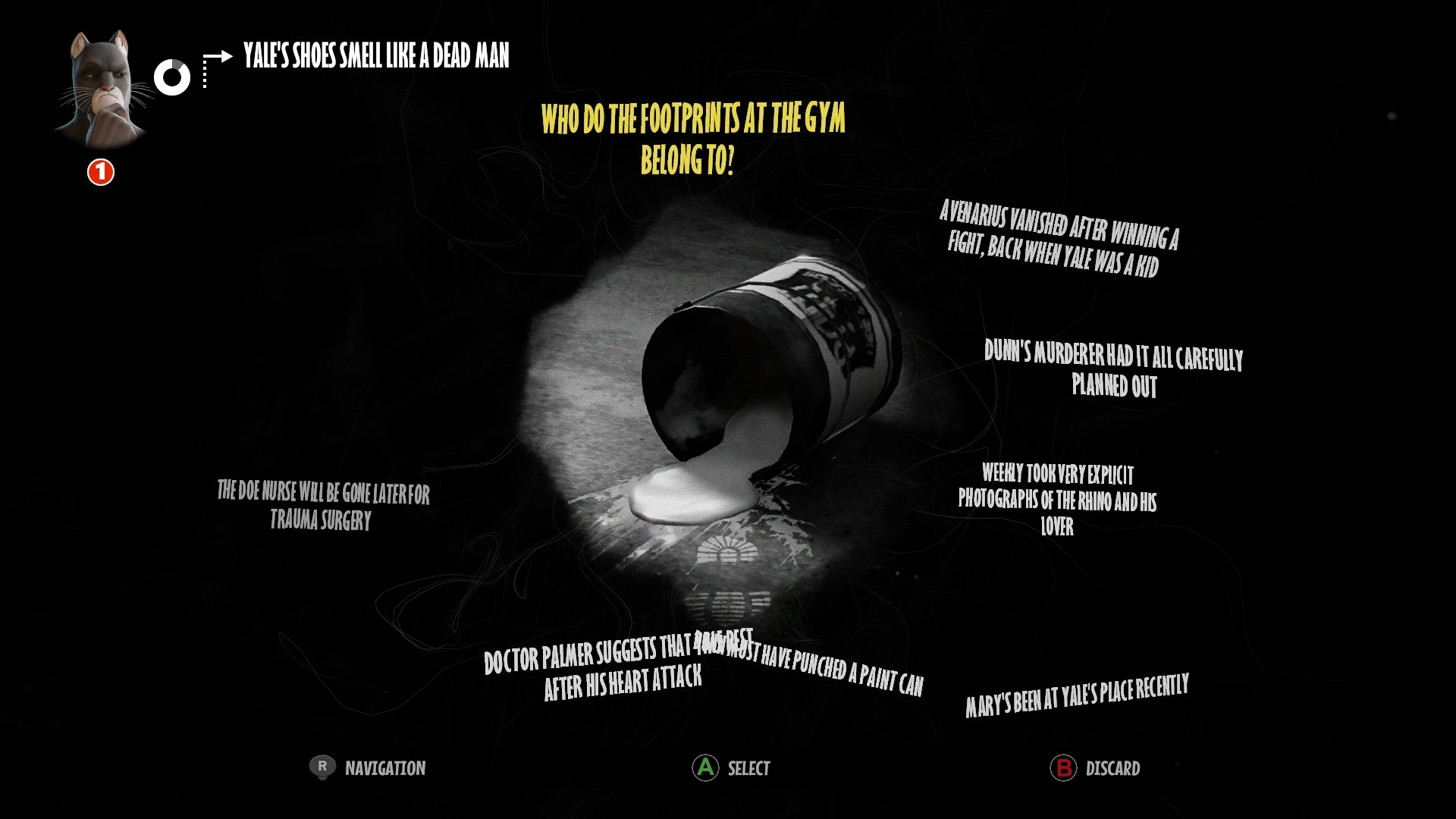 And this is all a shame, because everything else about Blacksad is executed quite well. I know I used interest in the plot earlier as a lead-up to the technical issues, but it legitimately is a well-crafted mystery. It’s obvious from the start that there’s deception afoot and it does a good job at throwing numerous red herrings and theories at you, making it seems as though there are indeed several possible explanations for what’s going on at any time, until the end where it all nicely clicks together, and it does even seem to branch in notable ways based on your choices. I haven’t actually read any of the comics before, but it does a good job introducing newbies like me to Blacksad’s world, setting up an interesting tale that stands up on its own.

There are also a couple of additional features that enhance things. One allows you to dive into Blacksad’s head and piece different clues together, reaching towards various conclusions, sometimes requiring you to string together three or more clues. The controls for selecting clues can be awkward at times, though, but it still works. And since Blacksad is a cat, on certain occasions you gain the ability to make use of his enhanced senses, switching to a black and white first-person view where you can use sight, smell and hearing to zoom in on various clues, like erratic heartbeats, reflections and more. Some of these moments are even timed, requiring you to act a bit fast. It’s simple stuff, but it does actually help you feel more like a detective.

Finally, the music deserves some praise, perfectly delivering a nice and jazzy soundtrack that sets the mood, be it a fight scene or regular dialogue. It is indeed one of the highlights. The graphics and character design may not be as strong, but they do get the job done, even if the main female characters fall right into the uncanny valley (although this is apparently the way they also appear in the comics, so I guess I can’t harp too much on that). 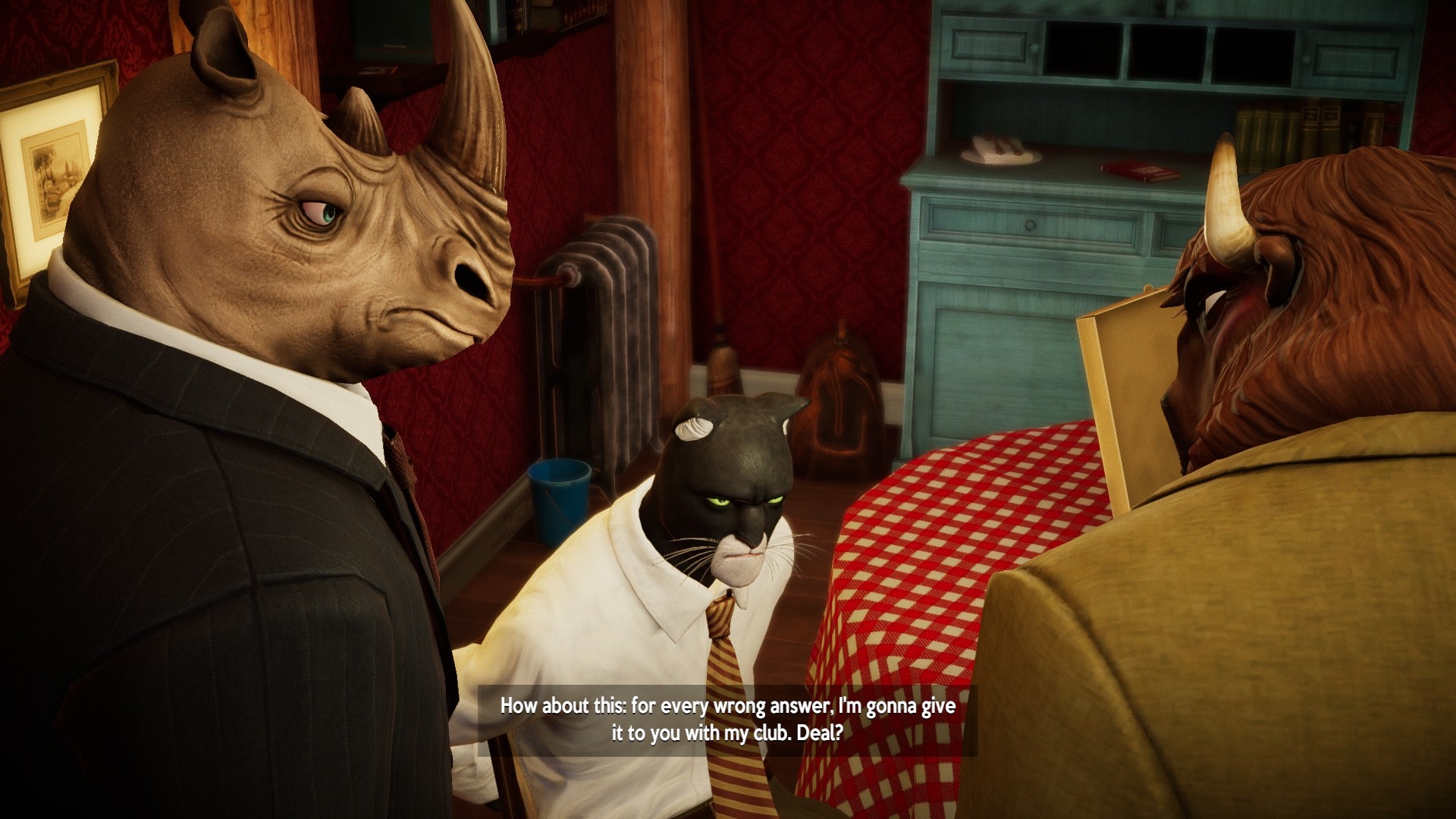 While Blacksad: Under the Skin shows a lot of promise in its story, world and a couple of neat gameplay mechanics that help put you right in Blacksad’s shoes, it unfortunately suffers when it comes to the execution. Be it clunky pixel hunts, an awkward interface or a myriad of potential glitches, the end result comes off as a bit of a janky, unpolished mess. Pendulo isn’t exactly a perfect developer, but this may end up being their weakest work yet, at least until future patches can improve things. For now, though, best to just turn down this case.