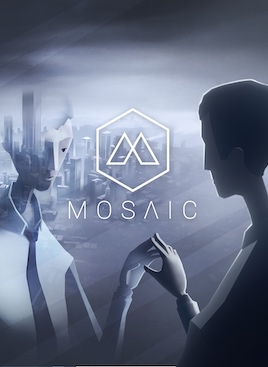 Tackling the rougher and more vapidly-dire themes on city living often find their potency through nuance. It’s one thing to paint a cityscape or scenario drowning in narcissistic consumerism and social alienation (ironic a thing that still feels for such a setting) in as broad a dull-grey brushstroke as one can muster. It’s another to give your audience — be they a reader, a viewer, a listener or in this case, a player — reason to care about the unfortunate circumstances or feel in anyway emotionally invested in what’s presented. Particularly when the focus is on a lone, hopeless protagonist and their struggles with simply making end’s meet. From the cold, absent color palette to the slow-crawling, establishing shots of traffic jams on an overcast morning, Mosaic evidently wants to instill that dejected, devoid-of-all-hope vibe a life living a nine-to-five job with smartphone in hand, can feel like.

The problem is developer Krillbite Studios don’t offer anything of note to illicit such an engagement. Had Mosaic fallen completely flat on its execution or simply been an objective mess on a technical front, the frustrations — the willingness for, like its main protagonist, the game to break from out the shackles of repetition — might not have been as present as they are. Though the on-the-nose imagery is more than a little plodding and eye-rolling, coming away from the brief five-to-six hour title, there are plenty of glimpses and half-materialized ideas in there that one can’t help but wish had been pushed or developed further. The themes and intentions exist, but much like the studio’s previous game, Among The Sleep, Mosaic too often takes refuge in its own implied presentation without giving players reason to connect. Worse, there’s the lack of that justifying its stricter control on player movement/involvement that many will know and not-so-love from other 2.5D ventures past with a bit more a thematic endeavor.

While that approach isn’t inherently wrong — and with the right balance and strict measure of many an element, can produce something rather wonderful — Mosaic incorporates this maybe not in the worst way possible, but in a manner which very quickly drains a player’s patience. The general structure behind Mosaic centers around a recurring loop of your player-character waking up in their run-of-the-mill apartment, heading to work — in what is, across its main chapters, a selective focus on a particular environment or setting — where the game closes on a contrast of puzzle-solving before the cycle repeats once more. There are optional areas to uncover and objects/people to interact with for those who venture off the implied path onward — a multi-color button prompt signalling the discovery of what the game would have you read as some momentary, uplifting flash of happiness for the protagonist — but other than a splash of warmer orange and yellow hues, the game never expands upon this other than the disposable denoting it as nothing more than some optional collectible. 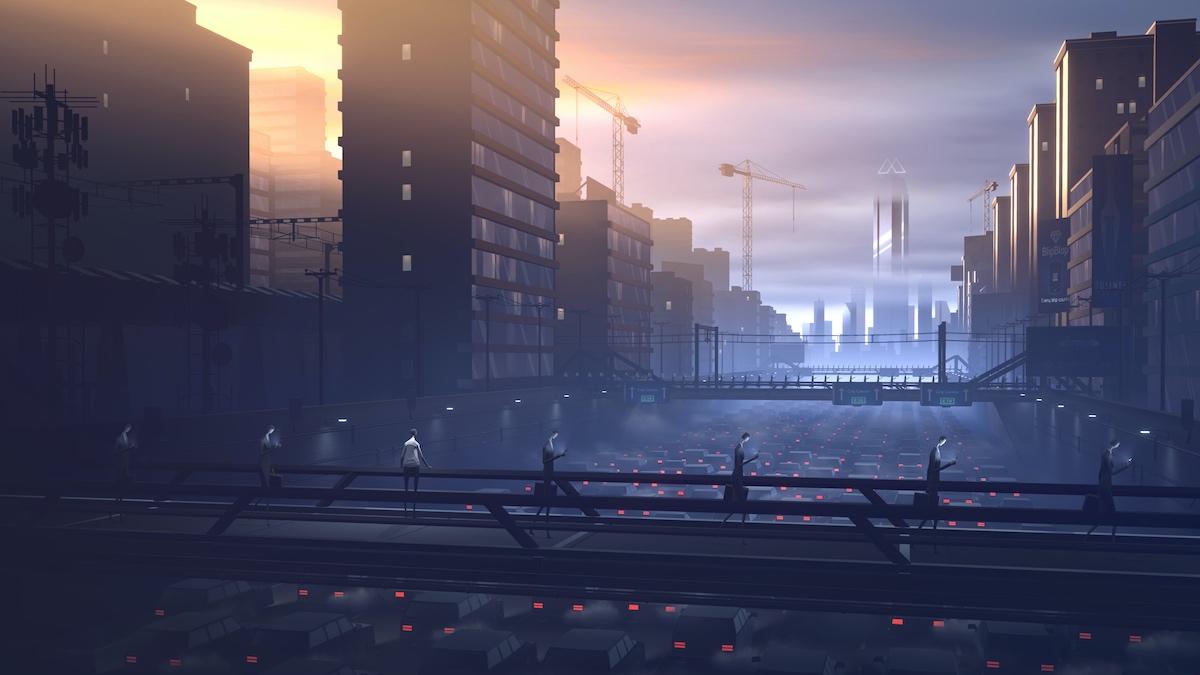 Perhaps this is all part of the game’s grander, subtle meta-narrative on the apathy of living such a life. That its awkward, tank-like controls when you’re strolling through your apartment — trying to get the game to register an interaction with a particular object — are meant to be artistically viable as opposed to just annoying. Or that the sluggish pace you move through environments, the game dragging its heel with progression, are meant to be symbolic and/or read in more forgiving circumstances. In reality, Mosaic garners little (if any) justification for its choppy pacing and detours into scene-setting. In some cases with the latter point, the end delivery can be guessed correctly from a mile away. A scene whereupon you take control of a butterfly from across the street the most obnoxious culprit.

Even when the game is at its more [potentially] suggestive and thus forgiving, when the game uses bursts or otherwise simmering layers of sound, Mosaic never capitalizes on that upturn in charitable intrigue. Scenes you expect to spiral wildly in one direction or another (the protagonist staring into his bathroom mirror as a harsh drone enters the fray) fading out into nothing. Again if there’s subtext here, it’s buried so deep beneath the straight-faced and formulaic mediocrity that we’re not seeing it. Easily the game’s best moments — its only redeeming moment for that matter — comes in the form of the excursions into puzzle-solving. Tasking players with guiding a scattering of black icons up through a hexagonal grid of nodes to the end goal. Along the way, different types of nodes you can build are introduced, as well as the creeping, looming threat of thus varyingly-colored blob that attempts to “infect” what you’ve already created. Essentially an annoyance with which can hamper your work and there’s little other way to describe this other than the brief-if-justified conundrum it creates. 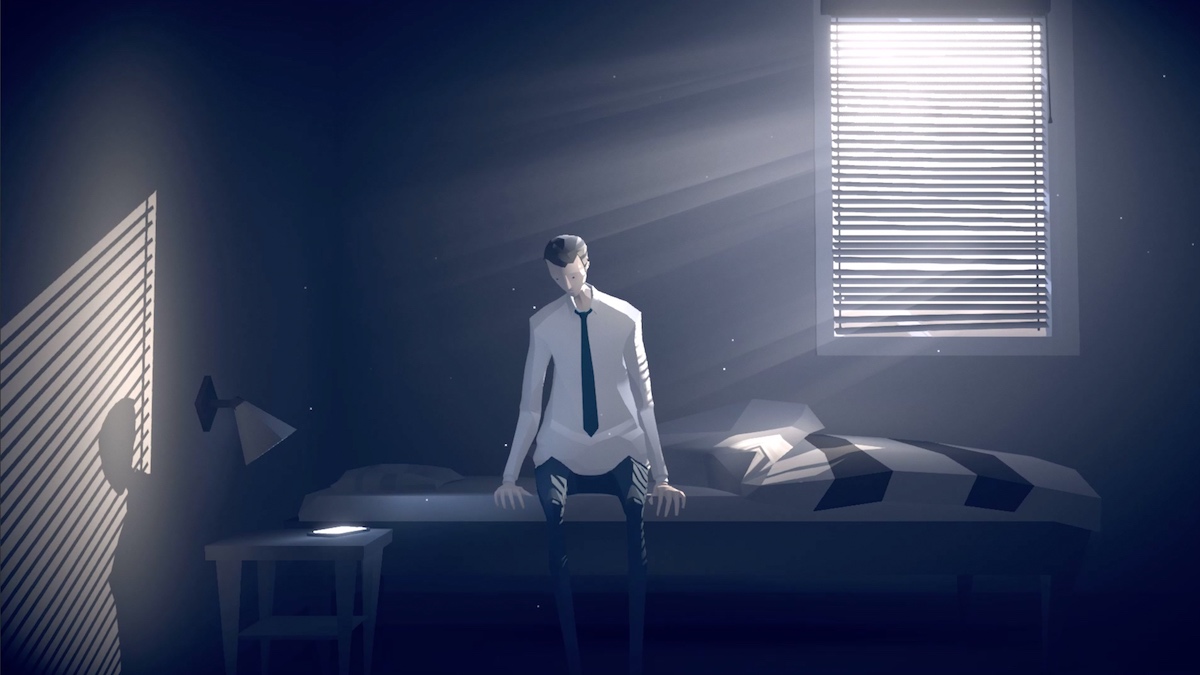 Because, again, Mosaic stops at the half-baked phase; serviceable puzzles, charming at the best of times, but gameplay that never invites or imposes any degree of player doubt or second-guessing on what it all means or what it could mean. Should I try and contain this colored threat? Should I let it “ruin” the task I’m intending to accomplish here. What’s the relevance of these sounds I’m hearing, is there any relevance? The illusion of some manner of subversion is there, albeit lingering, but Mosaic falters not just on what to do with it, but in convincing its players there’s greater meaning or purpose to look beyond its shallow detail. Before long, the puzzle segment is over and you’re back to the regular delivery of snail-paced, 2.5D walking.

It says something when the in-game BlipBlop app — a mini-game you can enable at anytime on your strolls, with your smartphone — ends up, bizarrely, at times more engaging and developed than the world the game is attempting to draw you into. Even if on face-value it’s a relatively-predictable parodying of mobile/gacha games, with a bare and simplistic design to match. Heck, most of what takes place on your phone — the clickbait-styled headlines in your news app, the rigged manner the BlipCoin trading app plays out in when buying/selling stock, even the way you’ll receive no likes on the dating app, however you decide on following the app’s rule to search for someone of the opposite gender — can end up being the most involved and fleshed-out part of the whole game. Sad a declaration that may be, in all the game’s set-pieces and eventual contorting what is/isn’t “real” so as to hammer-home its message.

Like so much of Mosaic‘s end substance, there are flashes of ideas to develop and manners with which the game can manipulate/tease its players. The brutalist, sharp, geometric design of its city which at times conflicts with the radiance of certain colors; the drab reality of one’s apartment, while a talking — perhaps imaginary — goldfish tells you to change your perspective on life whilst darting about the open air. But Mosaic only hints at grander/better ideas here, plunging instead, on frequent occasion, into more forceful, drip-feed glimpses of some implied reveal that never really pays off come the game’s climax. Is it all a dream, a simulation? Is the oppressed in fact (plot-twist) the oppressor of all this? It’s one of the few times where you’re not voluntarily fabricating something to keep intrigue attached to, all of which under the pretense the game is, somehow, leading up to something. Or rather, something that hasn’t been stated a million times over across all forms of media. 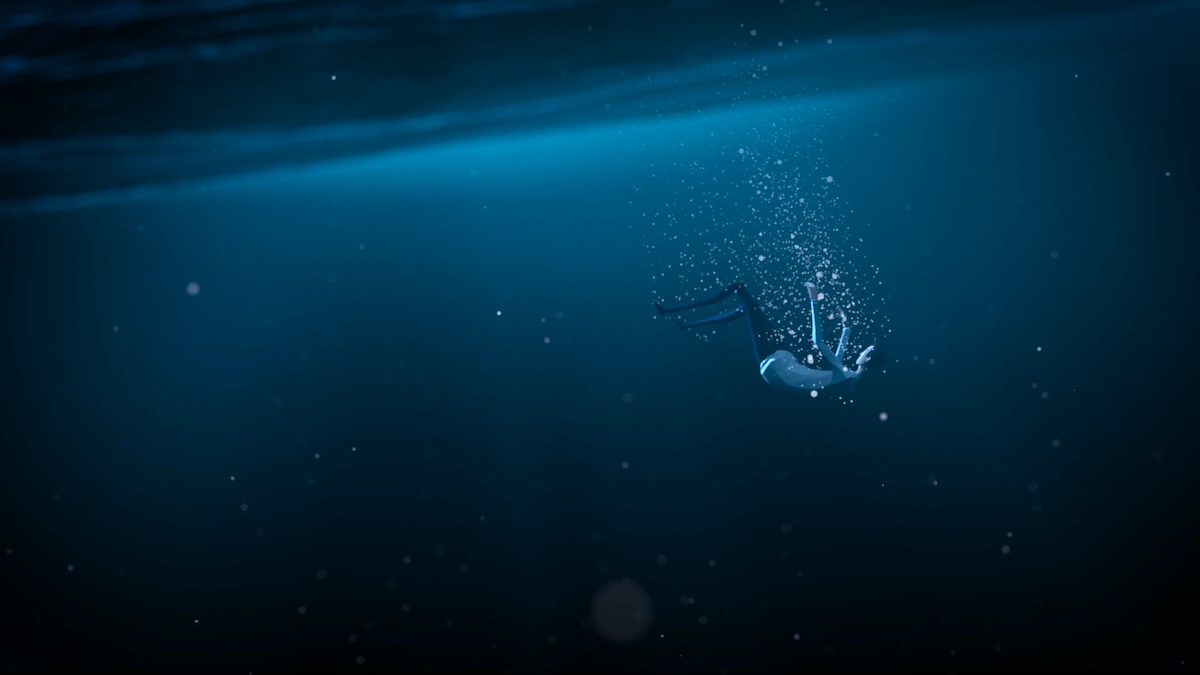 Like a lot of middling and so-so titles in years past, the “so-close” conclusion that something greater, more impactful — or at least enjoyable — has gone horribly amiss is always far more regrettable than an otherwise rotten-to-its-core excuse for a game. No doubt there are flashes that Mosaic could, and really should, have hit home with a much harder thud, but in the end whatever tone it’s attempting to offer, away nor long-lasting. Despite some modest, if brief, distractions with puzzle-solving and an ironically-detailed smartphone mechanic, Mosaic sadly comes off not so much not knowing what to say, but having convinced itself that what material it’s providing is in some way evocative. Whether it’s the indulgence of its presentation or simply the lack of reason from its players to really care about such a dire portrayal of modern-day life (implying harsher truths or not), Mosaic seldom lands any sort of balance between involvement through gameplay and artistic direction for the journey to feel worth trudging through. For a game all about trying to break out of a cycle and changing one’s perspective, Mosaic seems oddly content in the same drab pretense that in the end, through needless repetition, still arrives at nowhere meaningful or memorable.