When brothers are named Kain and Abel it’s pretty much a given that things are going to turn bad.  It’s parental neglect on par with naming them Neverstopkickingme and Imastinkybutt and bound to end in tragedy.  Somehow the white tiger-brothers Kain and Abel actually get along very well, acting as a well-trained fighting unit that sorts out trouble wherever it may arise in the land of Celephais.  And then it all goes bad, of course, as was utterly inevitable.  Kain turns on his brother with no warning and all of a sudden Abel is lost between dimensions with only the friendly merchant Will for company.  It’s not an ideal situation and only made more confusing by needing to fight through the alternate-dimension versions of Abel’s home to find out what’s actually going on.

Kelipot is a roguelike action-platformer set in furry fantasy worlds, richly drawn and animated without a polygon to be found.  Each mini-adventure into a new alternate dimension is made from a series of randomly-linked pre-built room, stocked with a good variety of monsters and ability-boosting treasures.  Abel is already a highly-skilled adventurer, with a good forward slash, downward stomp, and a dash that also grants a moment of invulnerability, but the passive and active items found along the way enhance his abilities even more.  The secondary attack is initially a ranged knife throw, taking a little bit of the magic bar with every use, while the finishing move is more powerful but drains the bar completely.  Magic regenerates at a decent speed by itself and comes back even faster when attacking an enemy, so it’s there to be used frequently.  Throw in a nice selection of passive pickups and Abel can get incredibly powerful while still being in danger of death by carelessness. 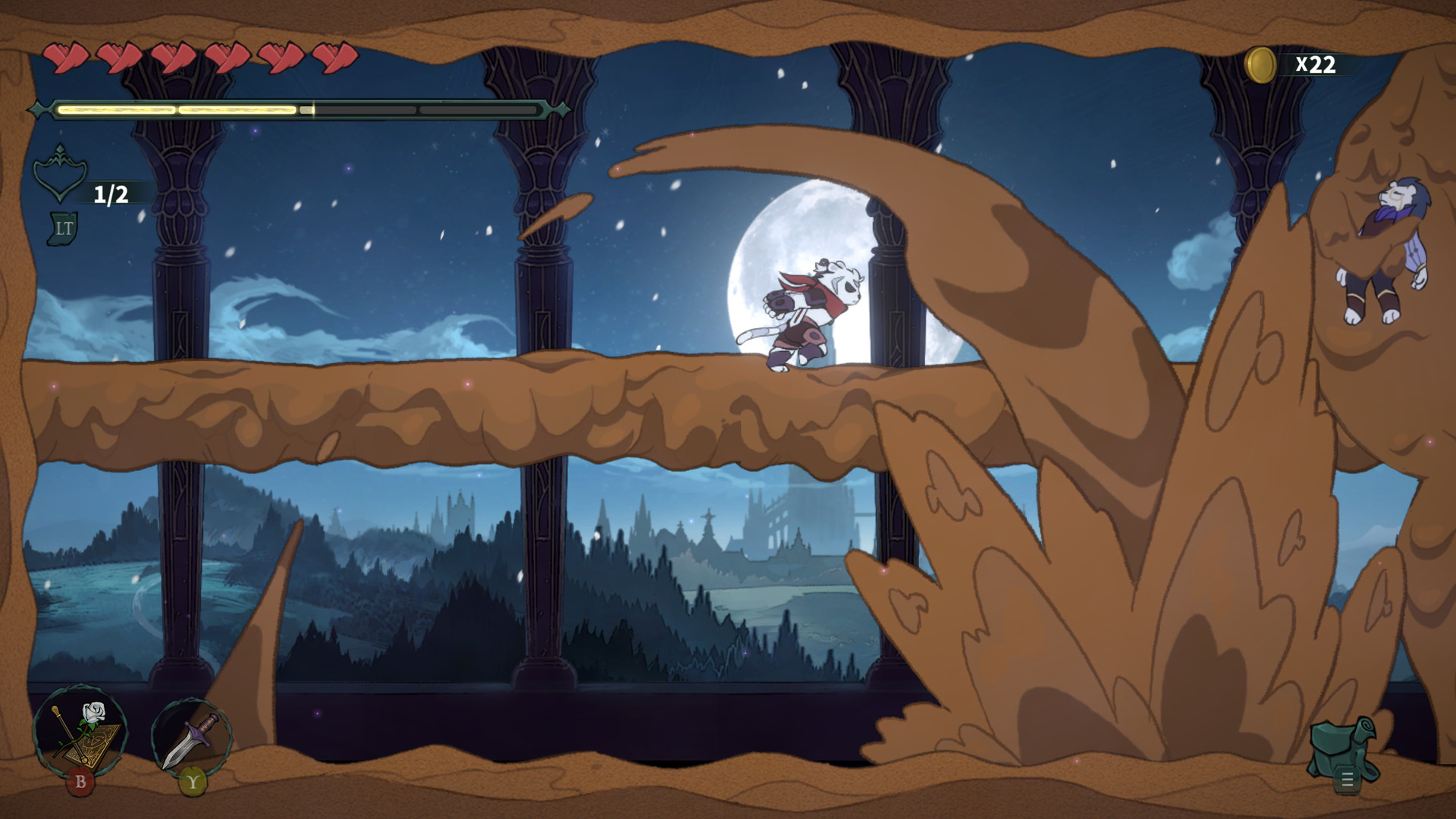 This is in no way helped by Kelipot frequently throwing in a touch of bullet-hell.  While the standard level layout is enemies and platforms, sometimes a little cramped but nothing out of the ordinary, bosses and mini-bosses aren’t shy at all about breaking out huge patterns of firepower.  Abel has a good stock of health, healing potions and frequently finds passive abilities to cancel damage from a hit, but it doesn’t take too many judgement errors for that not to be enough.  The short version of all this — Abel is a strong tiger-warrior but that doesn’t mean you can breeze through the levels.  One mis-timed attack leads to another and pretty soon the health-stock is gone, dumping Abel back to the interdimensional hub-world to try and do better next time.

I liked Kelipot quite a bit back at PAX East and even more when I got to play it in the comfort of home for the post-PAX preview.  (Note — the intro to the current version is very different from the video in that article). The game is fast and responsive and it doesn’t take much experience to get Abel zipping through the areas while carving a path through golems, hopping chess knights, teleporting ghosts and plenty of other beasts along the way.  The Early Access release is only a little rough around the edges, with my single complaint so far being that I found an untranslated area and now have no idea what a cute little doggy was doing lost in the caverns or its relationship to Will the merchant.  Everything else seems to work as promised and the future holds more levels, items, game modes and the usual polish and upgrades that turn a promising Early Access release into a full game.  For now, though, Kelipot is off to an excellent start with a fun cast of furries surviving in a series of twisted realities that will hopefully, eventually, lead to whatever the truth turns out to be.