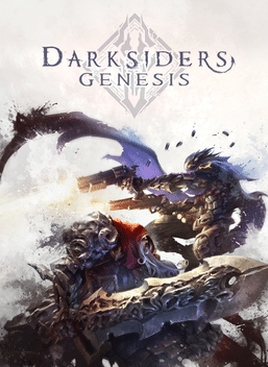 The Darksiders series has always occupied one of those odd places in the pantheon of video games. It’s popular and well-loved enough that there’s clearly a demand for more installments, yet none of the games in the apocalyptic series have ever been big enough to stand out amongst their peers. Perhaps it’s time for a fresh angle, which Darksiders Genesis is bringing to the table…both figuratively and literally. In contrast to the more third-person Zelda-inspired main entries, Genesis is a top-down, mostly straightforward dungeon crawler. It’s the type of approach that adds something unique while still feeling familiar, and for the most part, pays off.

I should get this out of the way first: Darksiders Genesis is one of those games that I always find difficult to review. Not due to being too complex or bad, mind you. Far from it, in this case. But it’s one of those games where I could probably spend a good three to five paragraphs going over how every good thing I enjoyed comes attached with negative thing (minor or major), but when it comes to the game’s positives concerning its most important areas, it all mainly boils down to “It’s just really, really fun,” which would awkwardly take up less space. So allow me to just skip ahead with a sneak peak at the closing comments and just state that this is a fun and action-packed game that you should totally check out.

But let’s begin proper by delving into the game’s story. As the title may suggest, Darksiders Genesis is actually a prequel to the main series. You play as Strife and Wrath, two of the Horsemen of the Apocalypse. The council that maintains balance has given them orders to investigate Lucifer, who apparently has a plan to screw over humanity by granting additional power to other demons. And…well, really, that’s all you get for the longest time. Yes, the story isn’t one of the game’s strong suits. I do appreciate that you don’t need to me a master of the series’ lore in order to understand things, but the plot structure suffers by taking the “Your princess is in another castle” approach. Complete one chapter to get Macguffin A, which leads to Macguffin B in another chapter, which leads to C, et cetera. 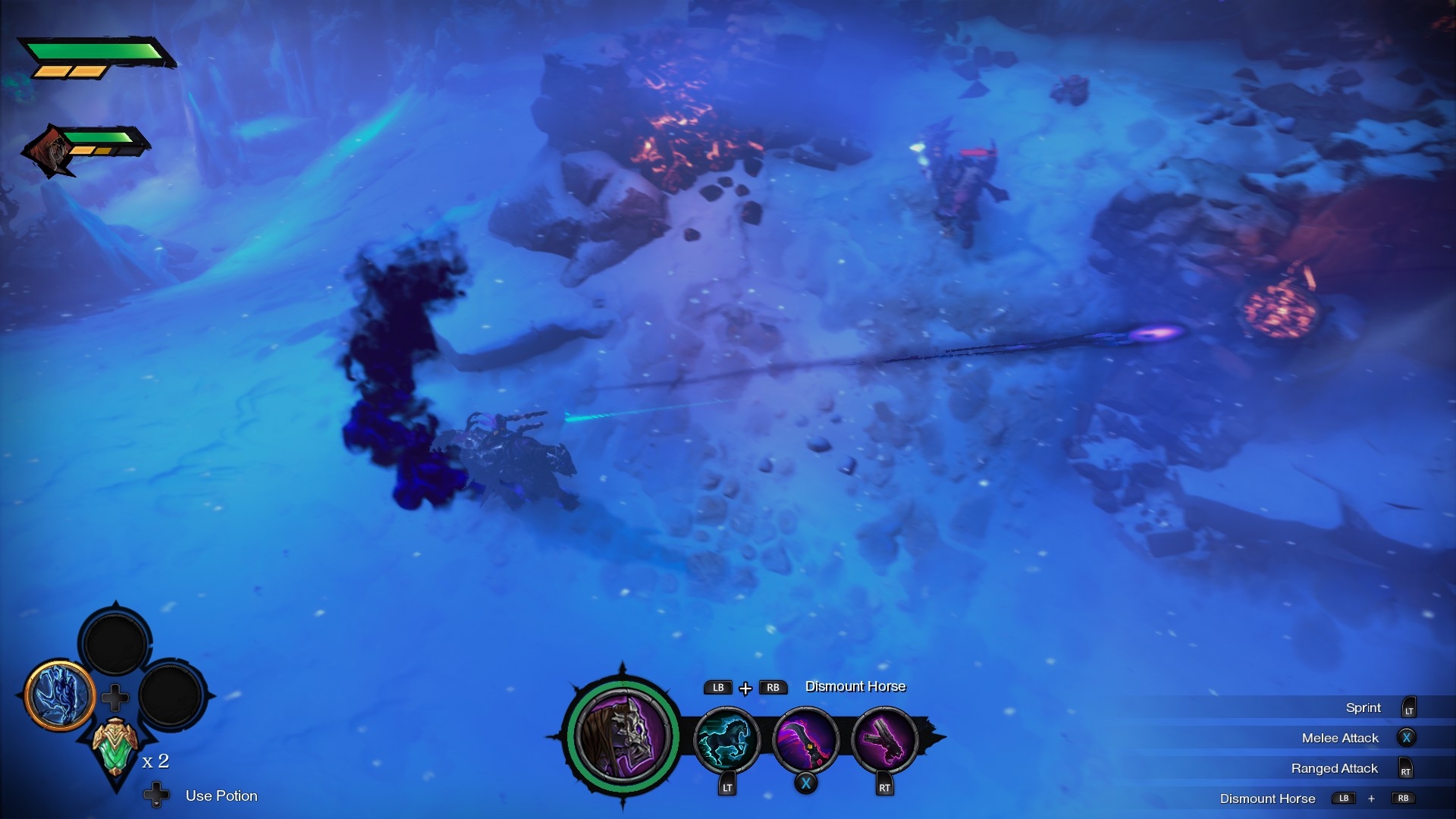 Thankfully, what Darksiders Genesis lacks in story, it does make up for in memorable characters via its various demons, all with some neat designs and particularly nice voice acting that gets across a ton of personality. The standout, though, is Strife, making his debut in this series. Basically, imagine what would happen if you combined Garrus from the Mass Effect games with Krombopulos Michael from Rick and Morty. A snarky, kill-happy quipster that packs a mean pair of guns. He hits that exact perfect sweet spot of being just comical enough without venturing to annoyance territory and easily makes for one of the year’s best characters. It also helps that his rapid-fire pistols make for fun twin-stick gameplay.

In fact, I would actually argue that War suffers in comparison. He’s still a good character, mind you, it’s just his more stoic personality really can’t compare with Strife. They do work great as a pair, though. It does come across as the standard “buddy cop” setup at first, but they do get some great banter at times. The two are basically siblings, and the dialogue actually gets this through, showcasing a good dynamic. But War does also pale gameplay-wise…well, at least to me. Strife goes for the long-distance approach, and War opts for melee, and in a game where you can easily find yourself facing eight or more enemies at a time, choosing the one who can keep a crowd at bay from a distance felt like a no-brainer (as my screenshots here can attest to).

Of course, Darksiders Genesis does go out of its way to make you comfortable with whichever approach you choose, be it through a series of purchasable upgrades and moves in the game’s Void hub or through the new Creature Coin system. Basically, when you kill enemies, you have a random chance at having them produce a coin, which you can equip on an upgrade grid. Each enemy provides unique effects, and if you match up the proper type of enemy with a similar space on the grid, then its effects are increased. It’s a simple addition, but a nice and clever one that allows for a touch of strategy in deciding how to properly arrange everything. 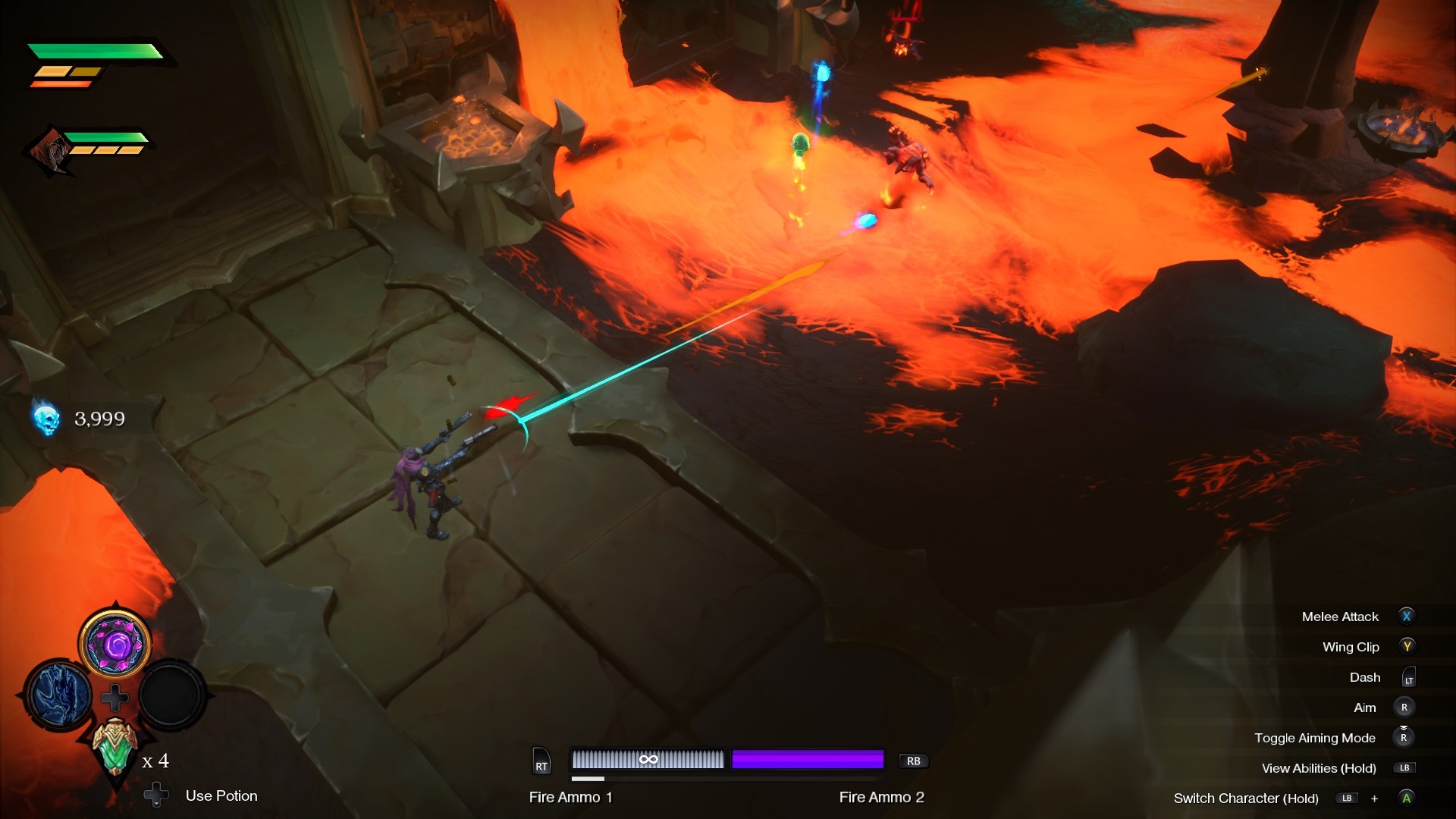 You can also upgrade the coins by collecting multiples of them, though, which means facing off against certain enemies again, and yeah, the game does encourage a bit of grinding at times in order to get either Creature Coins or souls and Boatman Coins that can be used as currency. It’s honestly not that bad, but when replaying levels, you sadly don’t seem to have an option to skip ahead to parts of your choice, like ones closer to that secret door towards the end that you wanted to unlock. So it means fighting through nearly everything again, seeing the same cinematics and feeling a bit of repetition. Luckily, about a third of the way through, you unlock the Arena, which allows you to fight waves of enemies in order to earn rewards on top of everything else.

The levels themselves are still fun to explore, though. Aside from just generally looking good and filled with a lot of detail, they are mostly nice and open, be they dungeons or large landscapes that you can actually traverse with your trusty horse. Secrets do tend to be nicely hidden, typically making great use of the forced camera angles. It is a shame that the maps you find for them rarely ever help, largely because they never show you your actually position in the level. You have you rely on area shapes and landmarks instead, which isn’t much help when trying to pinpoint where that one specific Boatman coin you missed is.

But let’s get down to what’s important: action. Darksiders Genesis excels here, delivering some truly satisfying combat. You’re given quite a few abilities and weapon types to work with that are fun to try out, enemies always attack en masse but never feel overwhelming, the Devil May Cry-esque spectacle combat is ported over nicely, allowing for a lot of fun acrobatics, and there’s a terrific level of challenge, even when facing a boss about twenty times your size. It’s the type of gameplay that’s simple yet extremely enjoyable and will likely be the reason you keep coming back to the game. Well, that, and Strife. 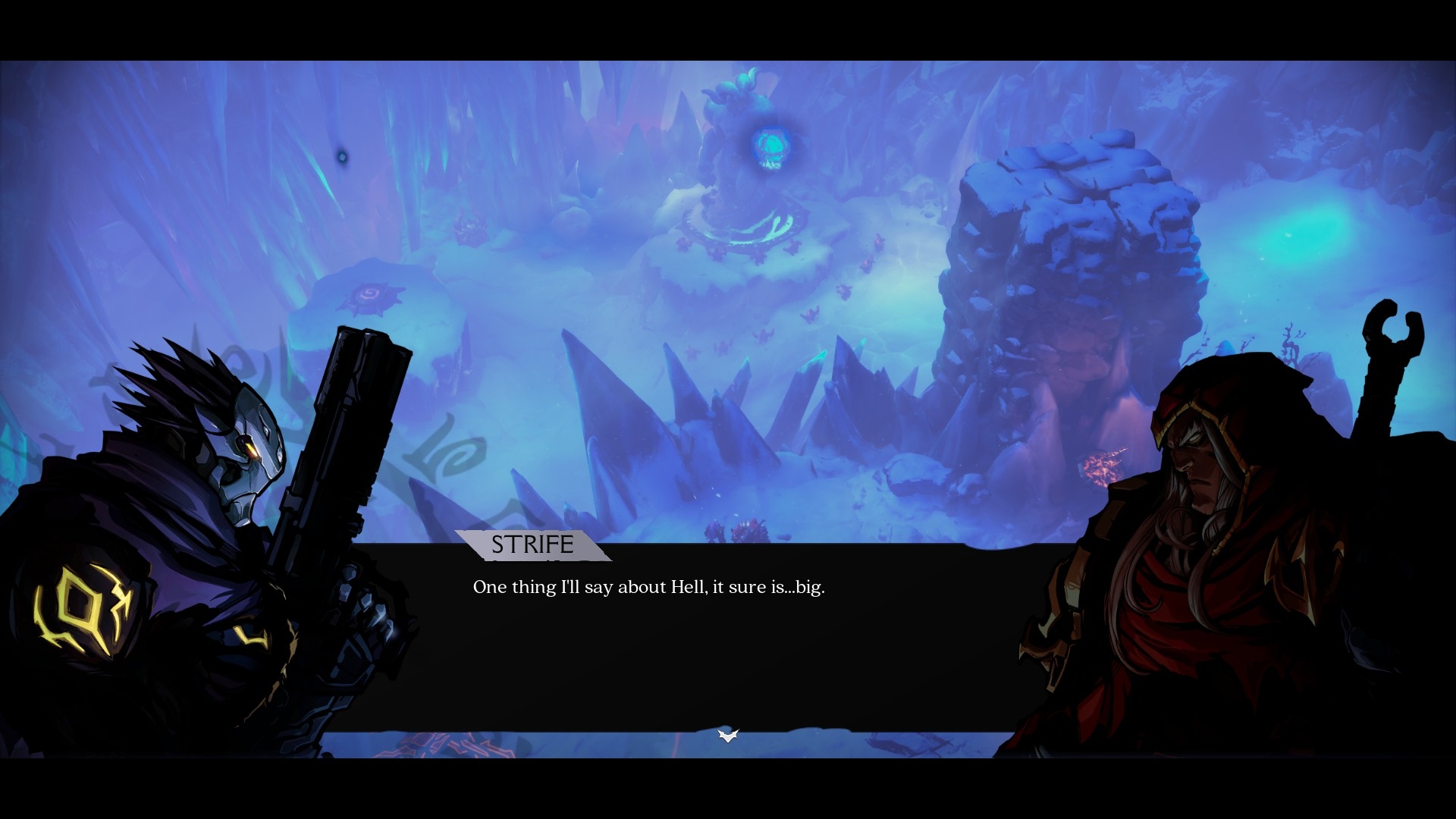 Darksiders Genesis easily cements itself as not just a great entry into the franchise, but also as a fine action-packed dungeon crawler in general. While it does have a few setbacks in areas such as its story, the stellar combat, great levels and an extremely likable and welcome main character in the form of Strife easily make this a game worth checking out. Airship Syndicate should be applauded for finding a way to still keep Darksiders fresh and here’s hoping we see future games in a similar vein as well.