One of the forgotten series that was a premiere reason to game on PC back around the turn of the century is MechWarrior. Players that were manned with joysticks battling it out in different robot mechs with physics that affected different body parts was unlike anything at the time. Players would see four original versions of the game and eventually MechWarrior Online would release a few years back. Piranha Studios would be tasked with developing the modern day MechWarrior 5: Mercenaries that ended up being delayed a year. The final release is here and does MechWarrior 5 stand out like the rest of the series and satisfy the fan base?

Unlike MechWarrior Online, MechWarrior 5: Mercenaries is a campaign-driven, single-player focused game that allows the player to build and unleash battlemechs. The story starts in 3015 and Humanity has colonized thousands of star systems. Players take over as Captain Mason as the torch is passed to him with the campaign begins due to the death of his father in battle. The story adapts to the lore of the universe during the Third Succession War, so star systems will change with time. The story progression somewhat feels related to what you would find in the X-COM universe. Time will continue to go by as you will need to manage mechs and work to get them better. The story will culminate in the year 3049. Everything from healing players to repairing mechs or even travel will cost time.

As for the campaign, the missions basically boil down to defending or attacking a location. Players will also gain access to side quests to help build the reputation. The campaign is basically taking on bounties or missions from companies as you try to make a good relationship with each company. This becomes more and more apparent and not to mention redundant over time. The Starmap will show off all the star systems in the game with certain areas affecting your costs and abilities. You will unlock more areas to travel to over time but the player will need to start managing the time and money needed to travel. A lot of this information would have been helpful up front. There is a solid tutorial at the beginning for navigation purposes, but the scope of things you will need to do will involving simply figuring out. A lot of the game isn’t spelled out for the player. 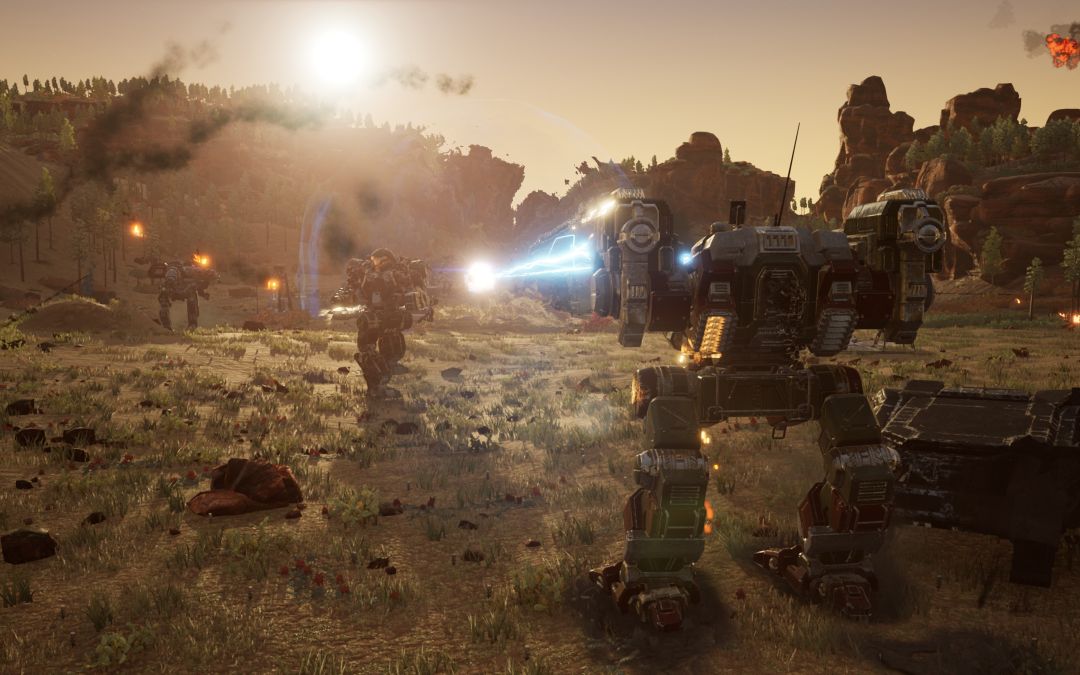 While missions become redundant, there are a few aspects that further hold the experience back. While the focus may be on time to pass and to earn some money, failure in a mission requires a complete restart. I had a mission fail due to an opposing mech dying and exploding near a building that only had a little bit of health left while defending. It ultimately cost me the mission and I had to replay the mission again. It truly feels like players are expected to know how to properly loadout a mech before entering battle because there will be a lot of trial and error before figuring out what needs to be done and even then, there’s still a good chance of failure. Opposing mechs are incredibly difficult to take down. The faster mechs such as the Spyder simply like to get near you and run around in circles without much strategy and it’s rather annoying. Other opposing AI includes tanks and helicopters and some missions have an overwhelming amount of both, but thankfully you will eventually unlock some help.

You can have up to four AI pilots and mechs accompany you on missions. This can help just for the sake of having some of the attention taken off of you. The pilot AI just kind of does what it wants to and it would be much better to incorporate strategy such as setting aggression level or giving commands. I also literally had one pilot run through a building I was defending just to cause more damage. Friendly fire is certainly a thing in this game and there’s times where the AI will stand in your way. There is a lot more than can be done here.

What is good about MechWarrior 5 is the amount of mechs and the customization. The game includes over fifty mech chassis with even more subvariants that you can customize with different weaponry. Mechs can be painted as Piranha Studios wanted to make it clear that no mech will be the same on the battlefield. The destruction is mostly wonderful in the game as almost everything on the battlefield can be destroyed. The one thing that can’t be are large scale buildings. You can completely destroy these and even run through smaller ones but the larger structures do not crumble as a whole. There will also be some other obstacles you can’t get over which won’t make much sense. The initial draw with the game will wear off quickly due to some of this as blowing structures and enemies up become inconsistent and further bland with time. 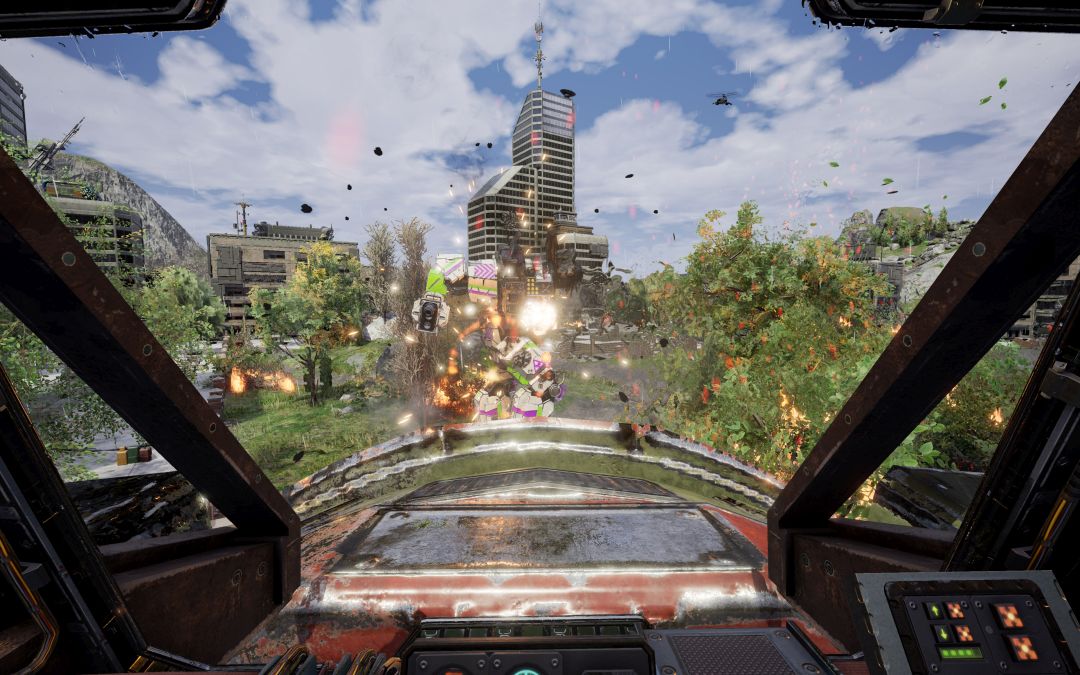 As for controlling the mechs themselves, this also will take some getting used to for those not familiar. It doesn’t control like a complete shooter. There is a throttle and brake system for moving the mechs around much like a tank. The top half of the mech is separately controlled by the bottom mech and while it isn’t complicated, it will take some adjusting. I do like the above average managing of controlling the mech and it does feel it would be better with a joystick and throttle. I played the game using a keyboard and mouse and that did enough to fit the part, but there are a lot of options to controlling the unit while in the heat of battle. It can become overwhelming. Some mechs can also jump but do know that this will cause damage to the legs as every facet of taking damage and managing equipment is brought into fold. You can either play with a view from inside the mech or an over-the-shoulder view. I found that using the over-the-shoulder view will give a better perception of being aware of how destroyed your mech is. Playing within the cockpit makes me wish there was a way to play the game in VR.

The visuals and performance are inconsistent and we can only hope that they’ll be improved over time. MechWarrior 5 allows the use of ray tracing for video cards that can support it. I played the game on a GTX 1080ti and while I don’t have ray tracing, the lighting is utterly spectacular in the game. When the sun is out and it reflects off of surfaces, this is something to marvel at. Each mech is highly-detailed visually and they look fantastic. Seeing pieces of building fall off like butter is also attractive. Visual issues come into play in the way of textures and performance. It doesn’t seem that the game has any type of dynamic resolution from a distance. Mountains and other items do not looks great even with everything maximized in the game. I ran the game at 4K resolution and also dropped it to 1080p and the game ran mostly at 60 FPS in 4K, but suffered during battle. Explosions cause the biggest drop in frames and it feels like the game needs to be further optimized. 1080p would also get drops in frames during these stints as well, but this was tested on only a 60hz monitor. I also encountered some low level fatal error crashes and the game specifically isn’t a fan of performance monitoring software nor overclocking. 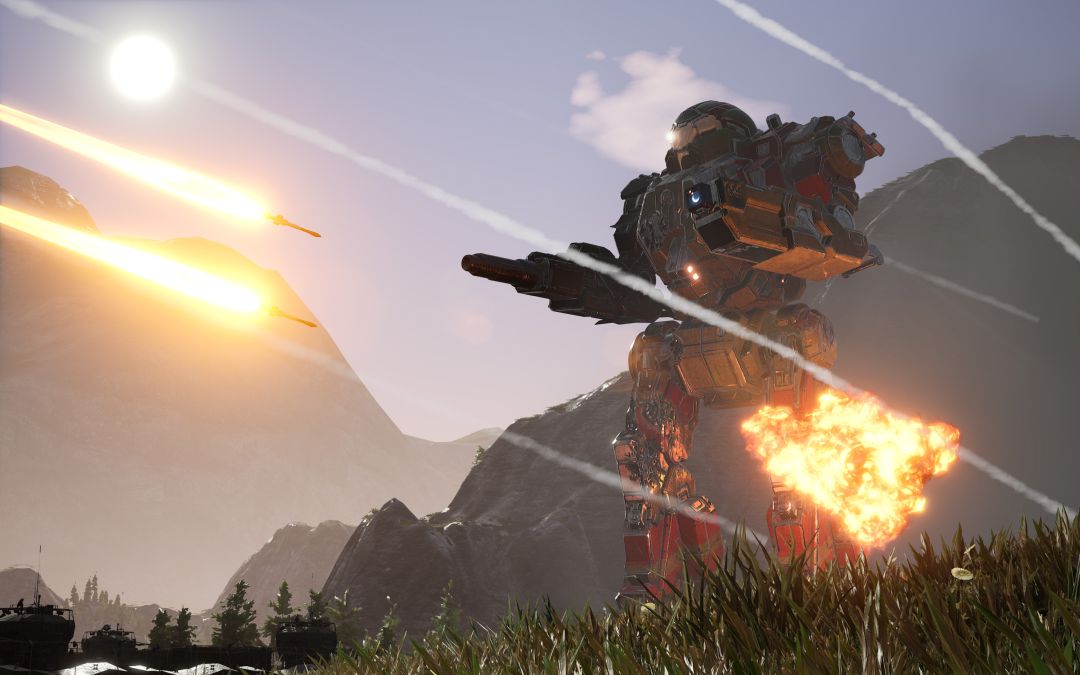 Just like the visuals, the audio aspect of MechWarrior 5 has its highs and lows. The soundtrack is fantastic as you will hear a combination of cyberpunk synthwave music and guitar solos that can really capture the moment. The sounds of the mechs along with the sounds from explosions are very believable. On the other hand, you have the terrible voice acting. It sounds like the voice acting from the Ace Combat series and it doesn’t mesh well. Your pilot will annoyingly let you know they took down a small tank numerous times.

While the focus is on the single player experience, there is a multiplayer cooperative mode included. I will put multiplayer lightly in this regard. Playing the single player campaign will eventually unlock other missions for you to do cooperatively. There are also preset scenarios to play along with a scenario customizer that makes the co-op mode nearly infinite. You can even just jump in with AI pilots and take on opponents which is some of the best enjoyment I got out of playing the game. Co-op does not work locally and will only work with friends in the Epic Game Store, as this is an exclusive. Piranha Studios pushed the idea of using discord and other outlets to get people to play with, but it just hides the disappointing fact that there’s no matchmaking. Maybe this will be added later, but on the other hand, MechWarrior 5 is intended to be a single player game and MechWarrior Online would be the multiplayer experience you’re looking for. The problem is that is an older game and this is a new experience that did include a small tease of multiplayer.

It is also worth noting that if you have a Razer keyboard, MechWarrior 5 incorporates its own profile out-of-the-box with Razer Chroma. Using the Huntsman Elite keyboard, I have not come across a better game that incorporates Chroma into a keyboard. When powering up the mech, lights will cycle on the keyboard as it would on powering something this massive up. There are color-coded designations for each key. It also incorporates specific lighting for Philips Hue and is truly something to experience if you have any of the supported technology. 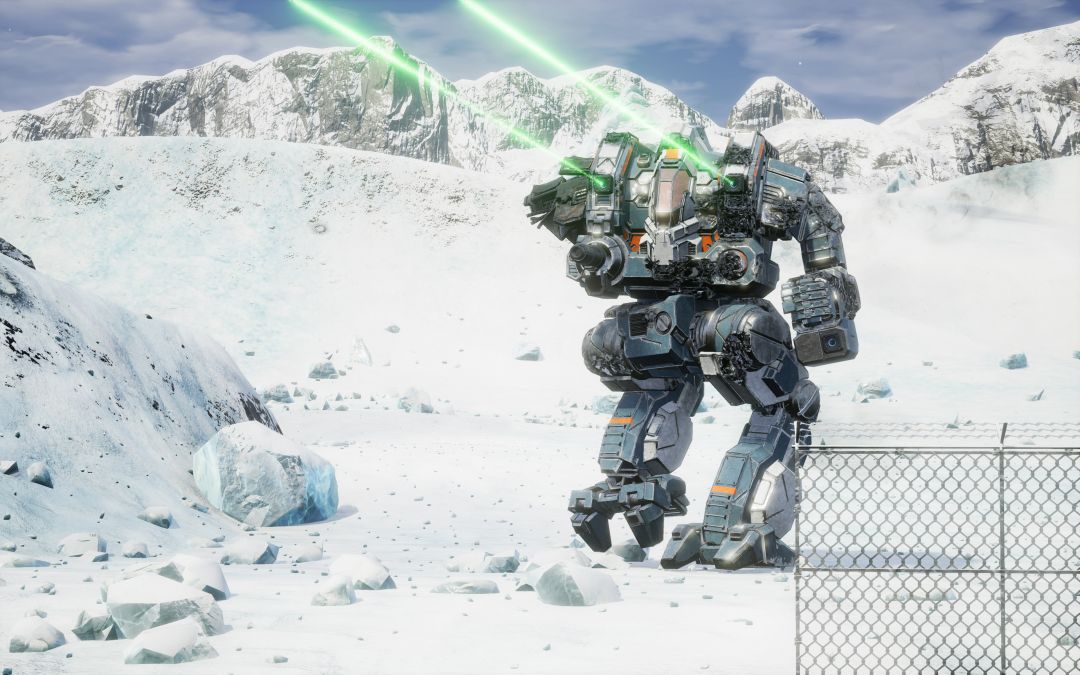 The hardcore fanbase will appreciate MechWarrior 5 at its core as it feels like a game that wishes it had today’s hardware technology 30 years ago. The combat can be good, but becomes bland and redundant over time. Fan will also appreciate the story lore and how it progresses along with the strategy elements. Unfortunately, though, it feels like a game that could have used more time but had already been delayed. There are spots where it shines and most of this is experienced early on. But the more time spent with the game and learning how to do things just to progress becomes dull and ultimately you feel left behind as the game clock starts to pull away. The local co-op battles seem like the best way to experience MechWarrior 5 if you don’t have any interest in the lore. Every mech and all the weapon arsenal is available and you can jump in with up to three other AI. Including the multiplayer aspect but requiring them to find friends rather than matchmaking is disappointing. There are things Piranha can add going forward, but for a game that was announced two years ago and delayed a year, the release feels disappointing to people who aren’t devoted fans of the series. Players can, however, look forward to mod support directly from Piranha.