Since its initial launch back in 2010, Deadly Premonition has charmed and confounded gamers in equal measure. Fans of the franchise, whether new or old, will appreciate the recently-released Collector’s Edition from Aksys Games. This edition comes a few months after the initial release on Nintendo Switch and includes some unique goodies. You won’t get the typical art book or soundtrack CD. Also, you won’t receive the same exact things that were included in the Deadly Premonition: The Director’s Cut – Classified Edition for PS3 from NIS America. 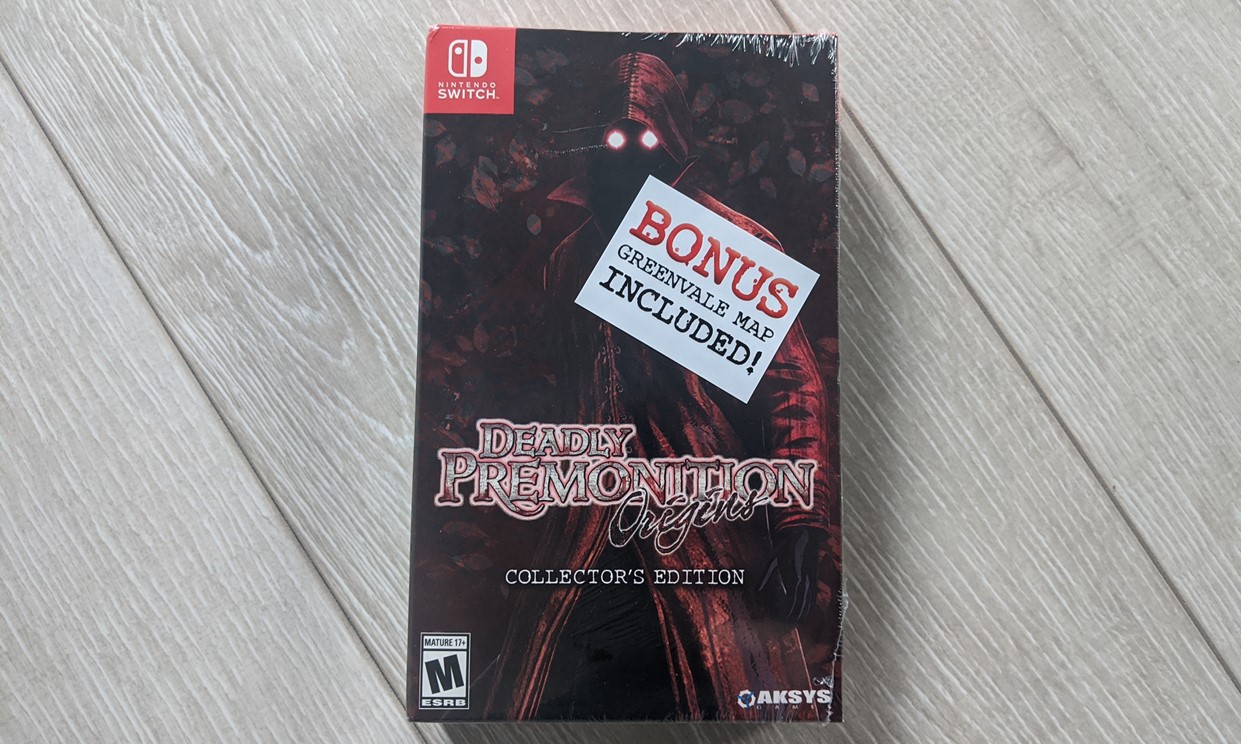 The Deadly Premonition Origins – Collector’s Edition comes housed in a cardboard box and contains three main items. First, and most obviously, is a copy of the game itself. The Switch cartridge comes in a normal retail-style sealed Switch game box – which has two postcards inside. Also nestled inside the cardboard outer box is a folded-up map of Greenvale (provided you purchase the game from Aksys Games’ website). Finally, there are a series of multiple different pins inside another, smaller box.

Although the PS3 Classified Edition included a map, it was not exactly the same. The main difference is the map was included in the artbook and super small. It was so small that it wasn’t very useful for using to navigate between areas in the game. This new map is larger at 13” x 15.5” and much more useful as a result. This version of the map also includes legible titles of the various businesses and buildings throughout Greenvale. If you forget which way you’re supposed to go to get to your next quest, just pull out the map. 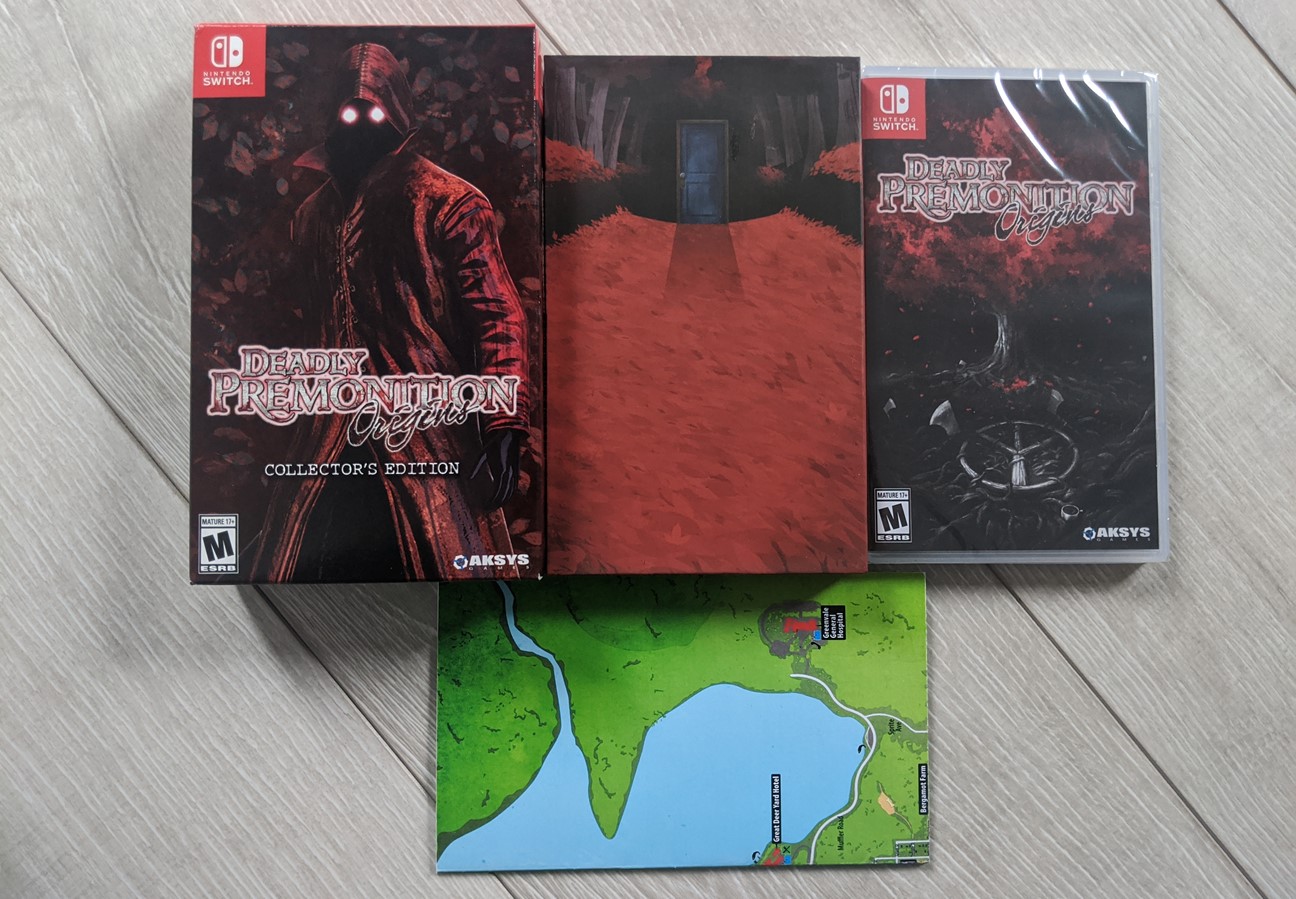 Playing Deadly Premonition Origins for the first time can be tough when the in-game map is always reorienting itself based on the player’s direction. Playing with a real-world map might seem silly, but it’s actually a great tactic for this game specifically. In the past, players often resorted to looking up a PDF map created by a fan. That method still works, of course, if you’d prefer to keep your Deadly Premonition Origins – Collector’s Edition in pristine condition.

Next up is a set of goodies which are less “useful” but are pretty darn cool. There are a set of six unique metal pins, each one in some way related to Deadly Premonition. First are three pins featuring different characters from the game: Agent Francis York Morgan, Emily Wyatt and the Raincoat Killer. Then there are two pins which correspond to the game’s lore with the phrases “FK in the Coffee” and “The Sinner’s Sandwich” emblazoned on them. Finally there is an adorable pin featuring Hidetaka “SWERY” Suehiro himself with the words “I [Heart] You All!” on it. All in all, it’s a great little box to keep the pins safe when you don’t want to actively show them off. 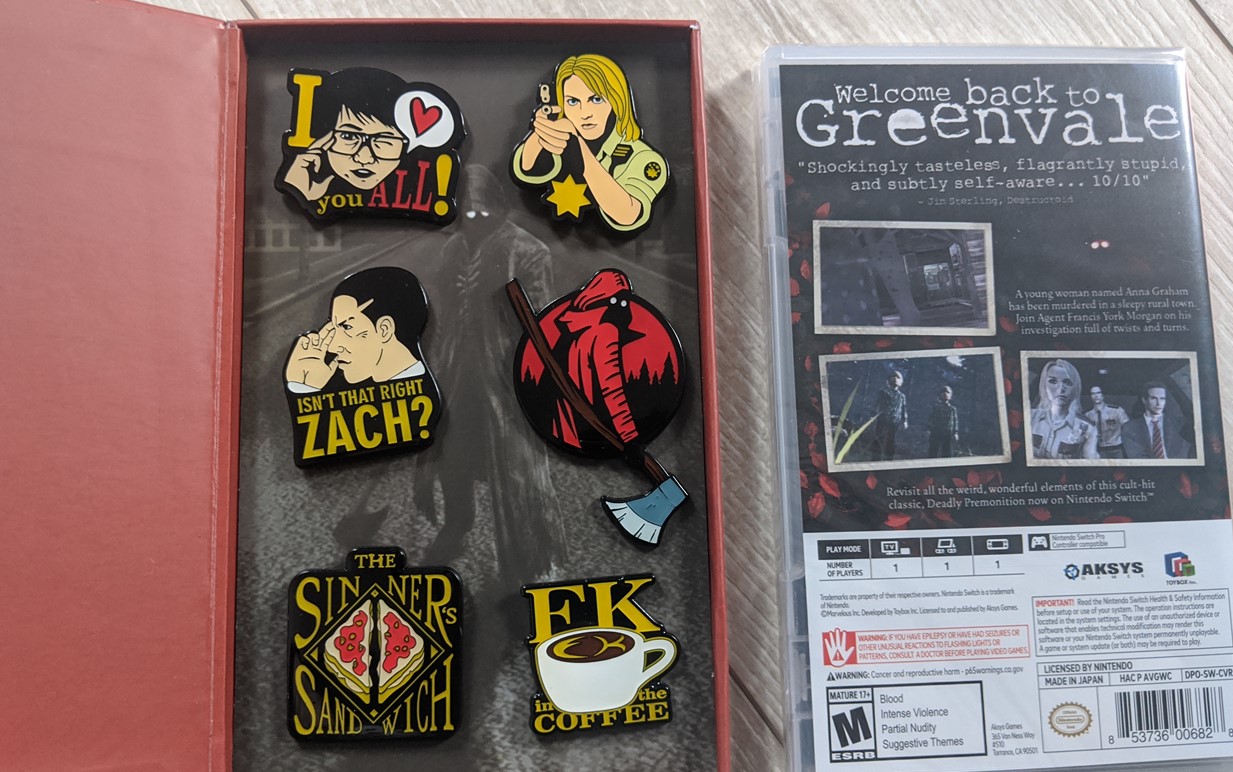 Aside from the cartridge, the otherwise bare Switch game box holds two postcards. These are not traditionally-sized postcards. 4.5” x 3.5” in size, they’re closer to collectible cards than actual postcards. Regardless, they feature some original artwork from SWERY himself. Both postcards feature a lovely message from him and explain that the sketches were from way back in 2005. This is actually when he first got the idea for creating Deadly Premonition!

This latest physical release of Deadly Premonition Origins is great for anyone who is looking to flesh out their Deadly Premonition collection or simply wants to pick up the game physically with a few extras for Switch. As of this writing the edition is still available for purchase from Aksys Games website for $49.99. Of course, those who don’t need all these bonuses can always opt to simply pick up the digital version or non-collector’s version on Switch instead.