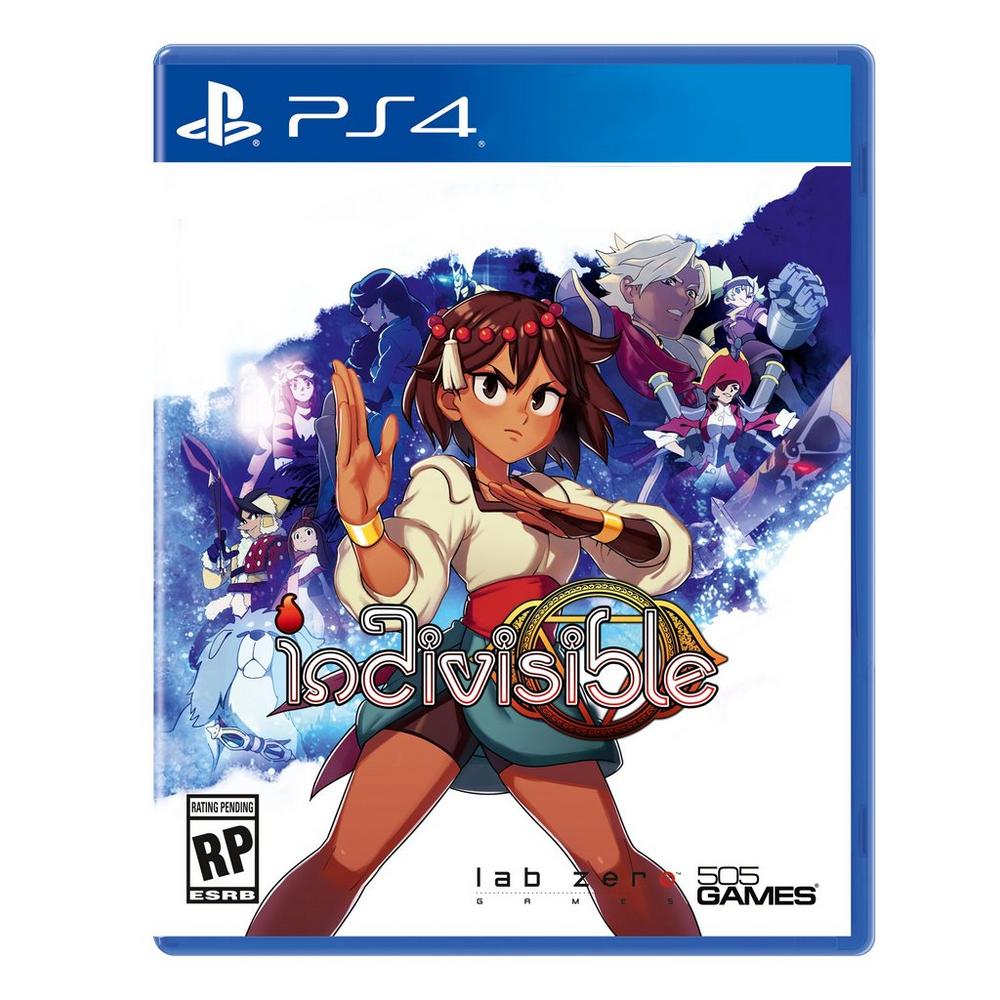 It’s kind of a strange feeling, loving a game that simply isn’t very good.  On the one hand there’s no question that a lot of care and attention went into Indivisible‘s story, resulting in a huge, memorable cast taking part in an epic adventure that avoids the overly-dramatic silliness that mars so many modern RPGs.  The battle system is a lot of fun and the platforming aspects have a surprising amount of depth.  There are a huge number of gameplay elements in Indivisible, but there’s just no way to avoid wishing the game had another year or so of development time to tie all its mechanics together properly.

Ajna is a young girl training under her father in a small village on the edge of nowhere.  Years ago her father was involved with sealing away the mad goddess Kala, but now he spends his days trying to raise a headstrong teenager.  After an argument during training Ajna heads back to find her village in flames (it was the home of an RPG hero so the poor place never stood a chance) and father dying, struck down by Dhar, an agent of the warlord Ravannavar.  And then things get weird as Dhar is turned into a small ball of light and dragged into Ajna’s mental landscape, becoming an unwilling and unwanted passenger on what starts as a journey towards revenge.

Dhar is only the first of many, many companions who will join up with Ajna along the way, each of which have their own abilities to add to combat.  Indivisible is an RPG cut from the same cloth as Valkyrie Profile in that the action is side-view whether out exploring the world or in combat.  Exploration is pure platforming, running and jumping and using all the skills Ajna learns along the way, while combat is an active-time battle using four out of the eventual count of twenty-one party members.  Each active character is assigned one of the face buttons; tap button, party member attacks, and everyone has multiple skills to take advantage of.  Pressing up or down on the controller on a basic fighter, for example, means that the attack is ground or air-based, while more specialized characters can do anything from heal, lay traps for the enemy the enemy, or even play a musical stat-buff. 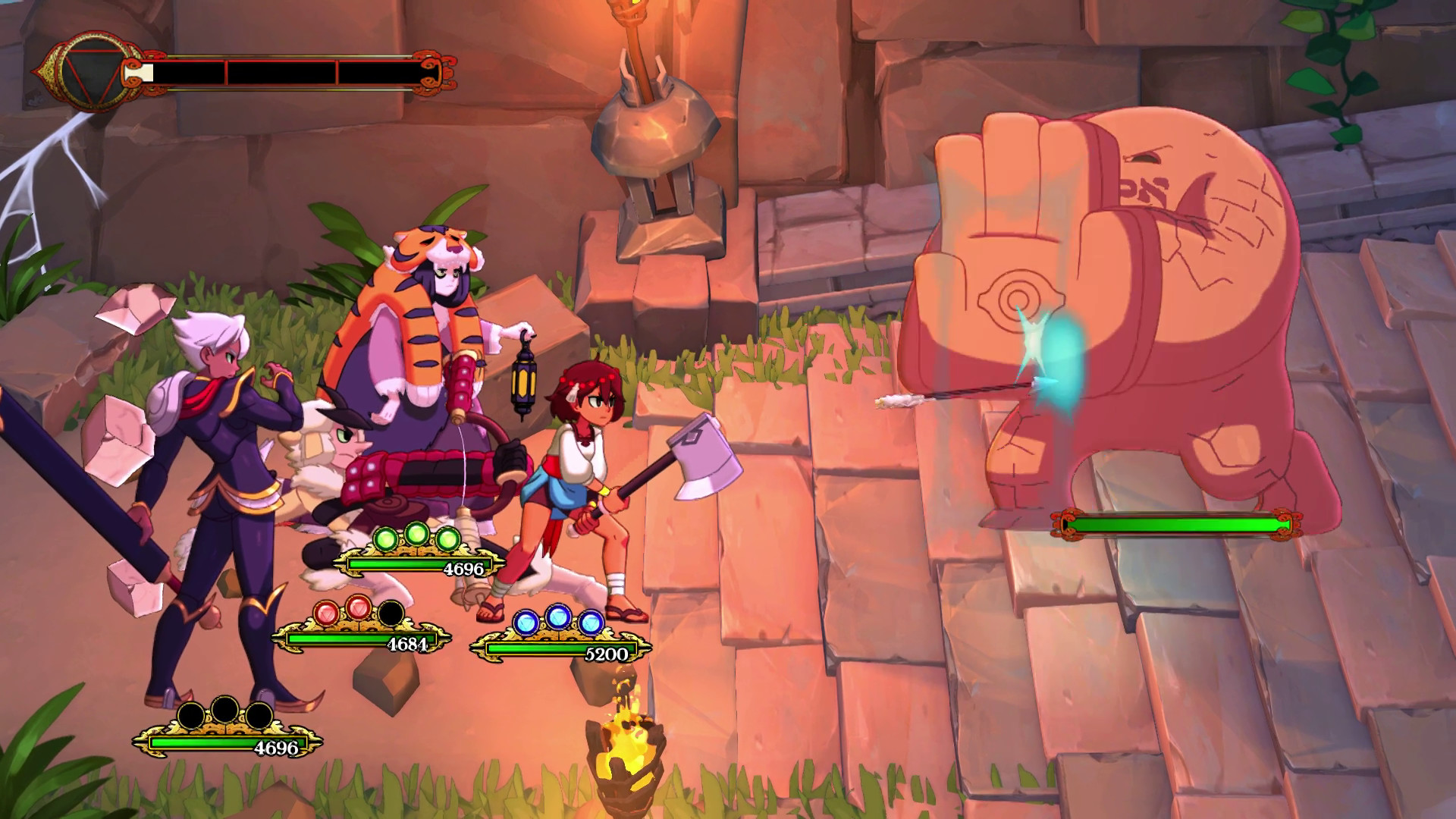 Each attack also fills in a small amount of a meter at the top of the screen, which is divided into equal-sized bars.  Most allies can use this meter to pull out powerful special attacks, with a one-bar ability generally being stronger than a standard hit but not so powerful as a three-bar strike.  That’s not true across everyone, though, because some characters get a healing skill or other ability as one of their specials.  Each character plays differently from the others and putting together an effective party means learning how best to utilize every member properly.  Generally the most fun can be had with two warriors, a healer and someone who lays traps so that when it’s the enemy’s turn they get interrupted with heavy damage, but just about any combination can be effective once you understand their quirks and how they can work together.

With the various directional attacks and the super meter battles can feel more like a fighting game than standard active-time turn-based RPG, but the world exploration is pure platforming.  Ajna starts out with a capable jump, a dash move that works on ground or in air, plus wall jump, and only gets more agile from there.  Ajna finds new weapons that add new traversal abilities, like an axe that sticks into the wall for an extra jump, or the spear she can use to launch herself higher.  The dash is joined by a charge move, which is basically just like a dash except it causes damage, and the two can be chained together for greater distance.  Collecting everything will require using every bit of platforming skill you can manage, although the deepest secrets require figuring out dependencies between the abilities that just aren’t required or explained anywhere else. 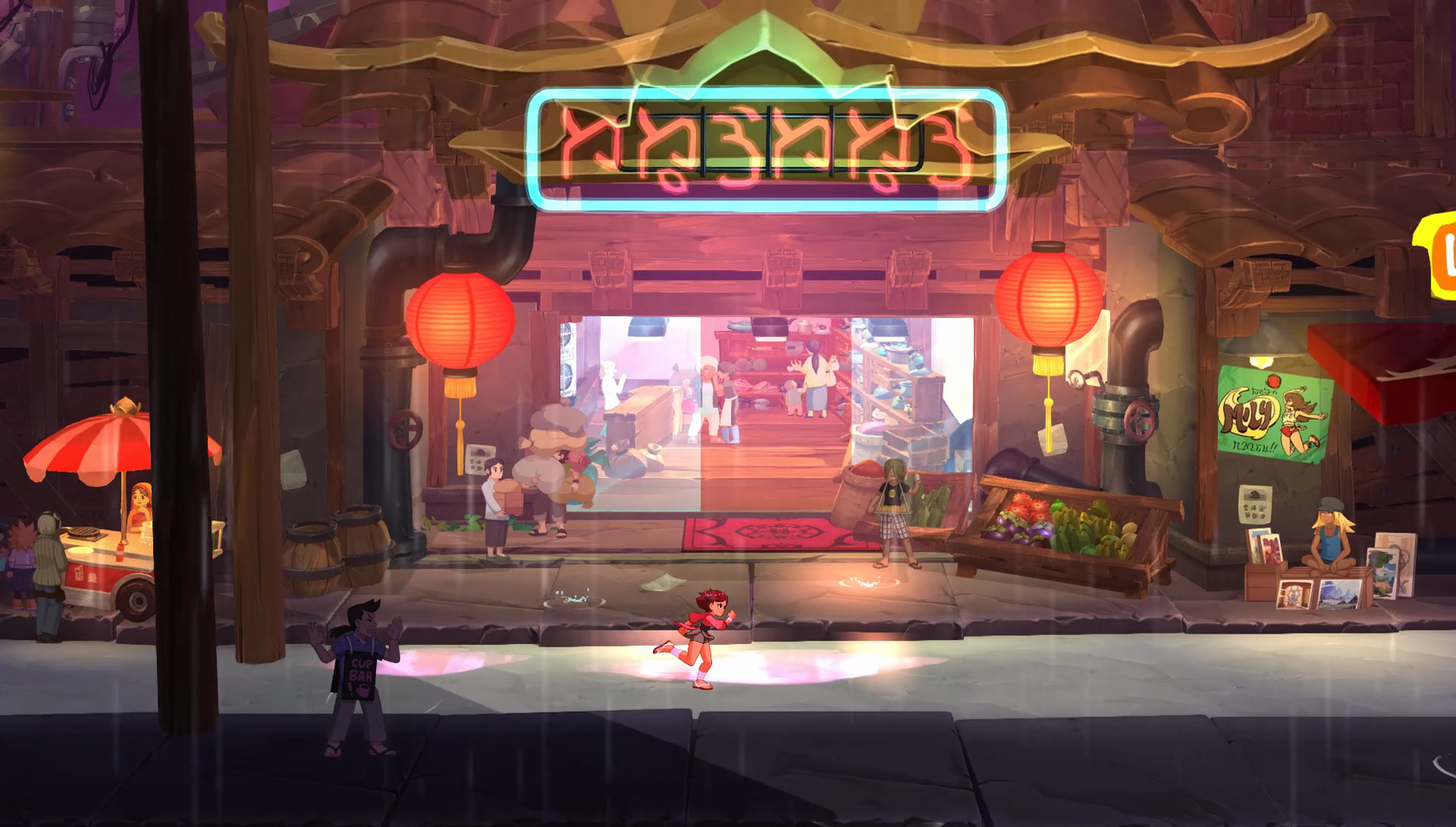 All these gameplay elements serve a story that’s wonderfully told, packed with likable, relatable characters working towards clearly-defined goals.  Ajna initially wants revenge for her father’s death, and later to save the world.  Dhar is stuck with Ajna but comes to understand his loyalty to Ravannavar was used to make him do terrible things.  Zebei and Kushi are Protectors of the monastery of Lhan, Ginseng wants to find medicinal plants, etc.  It’s not that any one character is overly complex but rather there’s so many of them, interacting in entertaining ways, that the party always feels like a lively group of friends that’s guaranteed to be a blast to hang out with.  Also, the snarky/gothy shaman Razmi is hands-down the best character of the year.

With so much going on and so many individual positives, it’s almost painful to see the game not come together.  The party powers up far beyond the skill of the enemies, for example, making the second half of the game far too easy.  To make up for the combat getting easier the platforming dominates the final area, but it was much more challenging before Ajna got so many abilities.  The hidden ringsel gems used to power up attack and defense actually have more in the game than are necessary, so it would practically take ignoring them to avoid maxing out those skills.  The platforming and the RPG aspects also never gel and instead feel like two different games that just happen to share the same space.  Basically, the problem with Indivisible is that it’s just not a complete game yet.

That’s not some kind of external judgement trying to explain the broken bits, either.  Right now there are two more side characters plus a handful of cross-game guest stars still in the wings waiting to be added in future updates.  Since the game came out back in early October it’s received multiple patches and updates, tweaking the balance and trying to solve some of the technical issues like slow loading between certain areas, but there’s still more to do.  Other aspects, such as the weird spikey-hives kicking around in remote areas during the back half of the game, feel like puzzle elements for a challenge that’s coming along later.  Indivisible is fully playable from start to finish, complete with satisfying ending and side-quests for all the characters, but a complex game requires a huge amount of polish to make everything work together and that hasn’t happened yet. 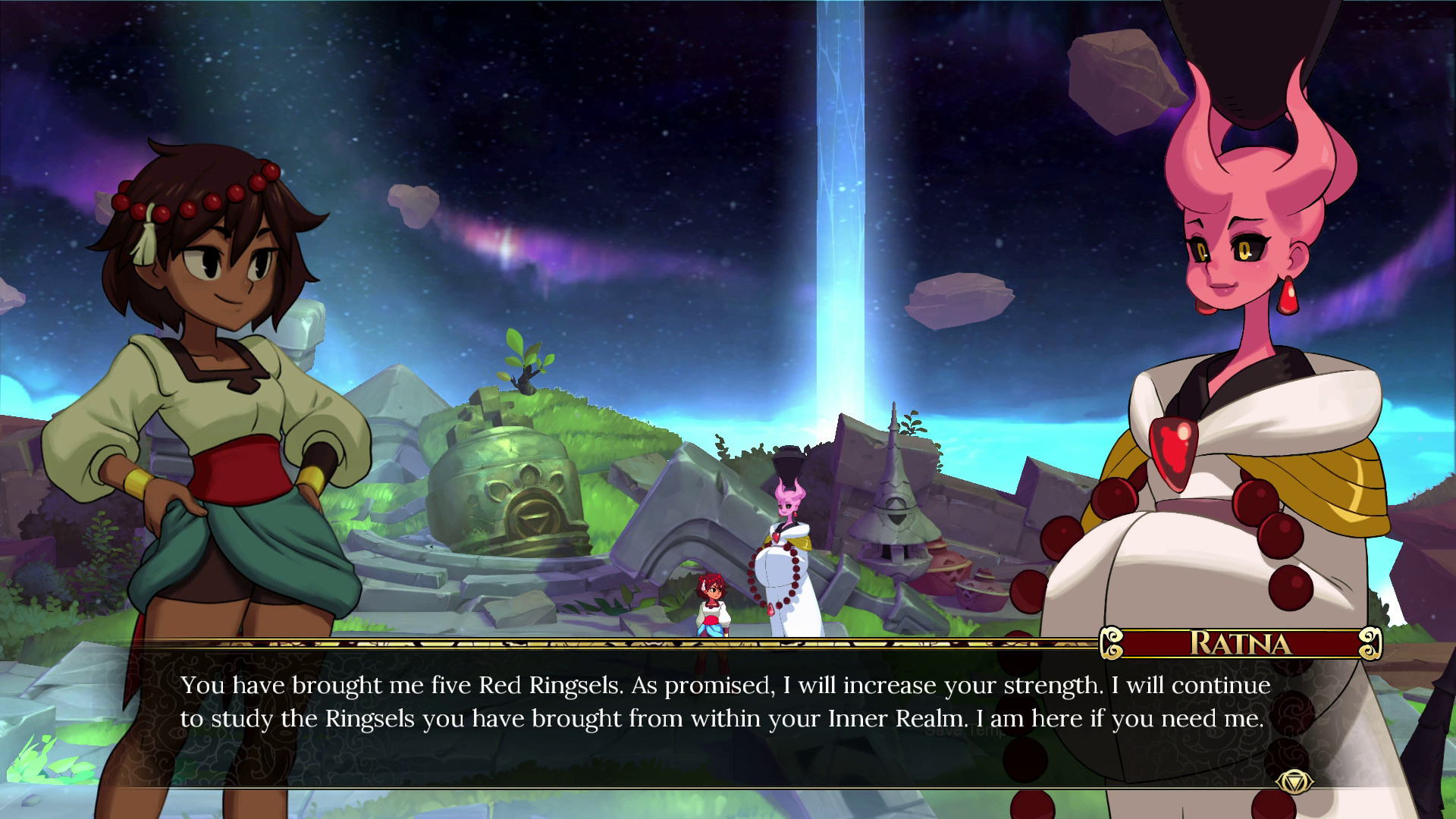 Despite this, as mentioned right up front, I absolutely loved playing Indivisible.  The combat being fairly easy just means the story has to carry the weight and the well-designed and animated cast is more than up to the job.  Ajna is an incredibly fun hero, headstrong to a fault and frequently more self-confident than she’s earned, but also capable of learning when necessary.  The other party members range from major characters to minor support, but everyone is unique and brings their own personality to both the story and combat.  Indivisible is a rare game that can rise above so many things not coming together, and whether you decide to dive in now with all its faults or wait another year for the ongoing polishing efforts to pay off, it will deliver a fantastic adventure that should easily stay with you long past the final closing credits.