Typically if something is heartless is it either being described in unflattering terms or is no longer alive. In 2012’s Dragon’s Dogma this is the mark of the hero known as the Arisen. This game wastes no time throwing the player into a hunt against a massive and powerful wyrm, which proves that there is reason that so many of these sort of games require the player to do some leveling grinding and collect the best equipment. Before long the player confronts the dragon, who unceremoniously plucks the player’s heart from their body with one of its claws. Soon the player is up and walking about despite having their heart ripped from their chest, and will henceforth by addressed as the Arisen who now has this responsibility to the people to be this great dragon slayer.

You see, the Arisen is the person who is destined to fight the dragon, and now that their pesky heart is no longer holding them back the player now has access to all the powers that come with being Arisen. With these new powers at their disposal, it is the player’s duty to now travel to the capital Gran Soren to earn an audience with Duke Edmun Dragonsbane who has agelessly ruled for a century since that was one of the perks he was given when he defeated a dragon in the past. As the story unfolds we find there is more going on in Gransys with various cults, dark magic and other ill-conceived doings. The story isn’t exactly the most memorable part of the game but is serviceable enough for a typical Dungeons & Dragons inspired fantasy setting.

The story is generally lackluster, but there are other areas that make this action RPG worth playing, namely the mostly good combat mechanics and the pawn system. The player has a lot of freedom in character creation, given the option to choose gender, body type and numerous customization options for their appearance. The player starts with access to basic fighter, ranger and magic user classes but more specialized and hybrid versions open up early in the game’s progression. Each class has different skills and equipment but the beauty is the player can swap out their vocation at various locations. The assassin was a class that I remember being the most fun overall but part of the overall fun is just switching classes around and trying out new play styles. Who doesn’t laugh when you sneak up on a sleeping saurian and cast a wall of fire on it, launching it into the air while severing its tail before it dies? 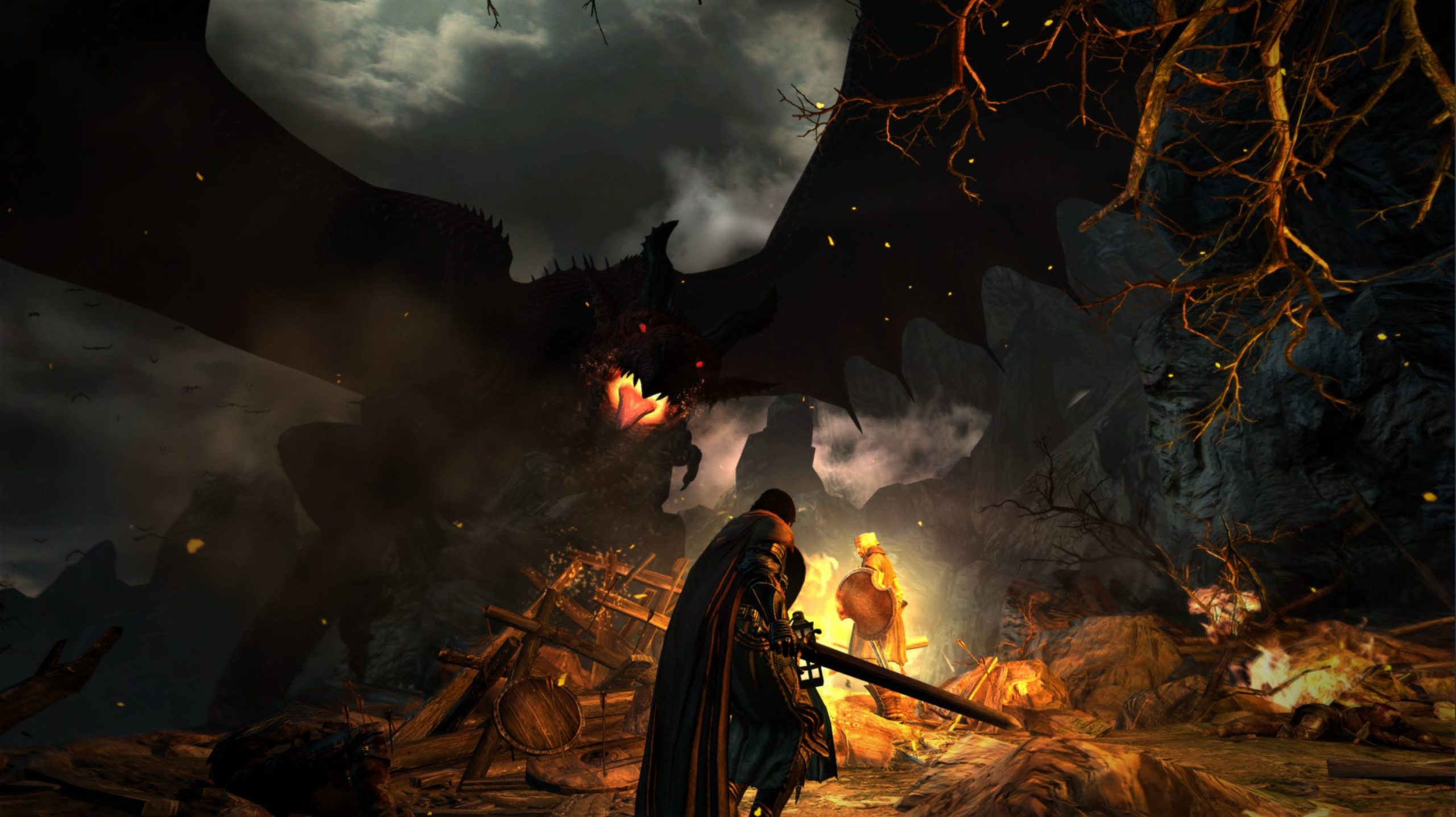 The pawn system was a nice addition to Dragon’s Dogma. It allows the game to remain single player but still have an adventuring party. It also makes the game a lot easier if you suck at action games since the party can sometimes turn the tide of battle in favorable ways though their AI isn’t always the brightest. Pawns are these weird people that exist in a rift outside of the real world. They don’t seem to lead a self-actualized life as they don’t have much of a purpose besides following the Arisen around and crushing their enemies. The Arisen gets a main pawn who hangs around for the whole game who the player can freely swap their vocation and has to manage their equipment. The player can hire two additional pawns but these pawns never grow or evolve so swapping out new pawns whenever a few levels are gained is advisable. A nice thing about the pawn system is the player can build a party of various classes that are going to be most beneficial, though like most RPGs it’s advisable that there should be some mix of different classes. Pawns are typically the same level as the player, though they can be a bit more advanced if you’re willing to spend some rift crystals. On my first playthrough on the Xbox 360 I somehow was able to snag a level 182 magic user for zero rift crystals when my character was around level 30. Needless to say that pawn was still with me on New Game+.

If it’s one thing Capcom knows it’s fighting. Actually they know a lot of things, they’re a great developer and publisher, but we’re going to focus on fighting. Final Fight was one of the great classic beat ’em ups and they have transferred this to fantasy settings like Knights of the Round and Chronicles of Mystara. Dragon’s Dogma is the next evolution of this. The hack and slash beat ’em up approach seamlessly weaves in magic spells and archery trickshots to create battles that are as enthralling to watch as they are to participate. The result is the near perfect blend of traditional RPG team battles but played out with beat ’em up mechanics. When battling larger creatures like a Griffin or Cyclops the player (and pawns) can jump and grab on the creature, hacking away at them while the monster impotently thrashes around, trying to remove the attacking party. Picking up enemies to throw them has always been a satisfying feature in these type of games, but that satisfaction goes to a new level when you’re fighting a group of bandits on a mountainside passage and a troublesome spellcaster is thrown off to edge to fall a hundred feet. Seeing the experience point award pop a right after that splat a few seconds after throwing them is so satisfying. 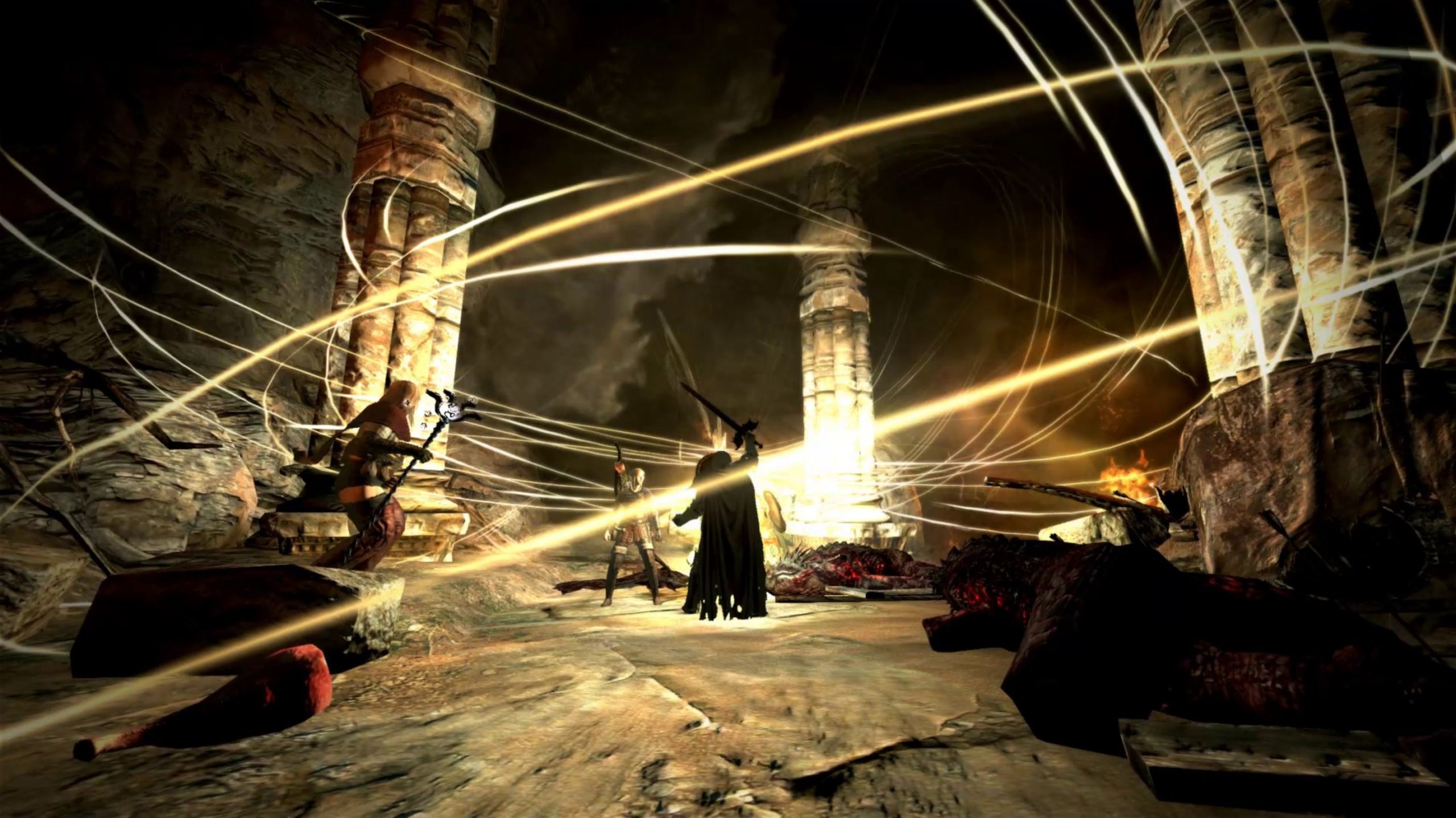 As much as there is to praise about Dragon’s Dogma there are a few design choices and technical issues that are points of vexation. The pawns try to make small talk on the journey, but they have about five different lines they repeat ad nauseam. “Counter after they strike” is typically heard a few times each encounter, and any warrior with any experience understands how countering works. The camera is apparently controlled by the dragon the Arisen is destined to fight, since oftentimes in battle it will zoom in a bush, giving the player a detailed view of the leaves and branches while they player can guess by the shrinking health bar and sounds of battle the Arisen is getting stomped by multiple foes. Sometimes when a spell is cast or an enemy is grabbed time will slow to zoom in on the NPC action, adding a Matrix style effect over a decade after those lost cultural relevance while disrupting the flow of battle and disorienting the player. Fast travel does exist but is limited, and with the game world as big as it is having fast travel at least between major cities and encampments would be a great quality of life enhancer. The worst offender, though, are the dreaded escort quests. These quests can be taken from the local bulletin board and they involve escorting an NPC to a far away location. These quests wouldn’t be so bad if the escorted party wasn’t so stupid they needed the Arisen and pawns to get anywhere because they are so oblivious to their surroundings. Many a time on these quests has the party encountered a hostile Chimera or group of bandits and while we’re trying to take care of business the NPC mindless walks around haphazardly, often getting killed because apparently taking a lackadaisical in the middle of a massive brawl seems like a good idea. The autosave function is unforgiving so saving often with one of these braindead companions is a good idea.

In 2013 a new version was released called Dragon’s Dogma: Dark Arisen. This version added a new area Bitterblack Isle, which adds new monsters and story content for high level characters. This additional content isn’t enough to go buy a new version of the game if the original is already in the player’s possession but this is the version newcomers should get. Besides, this is the version that was re-released in 2017 for current gen consoles and also this year for Switch. There are some cool enemies in Bitterblack and some nice equipment that can make the end of the main game a bit easier. 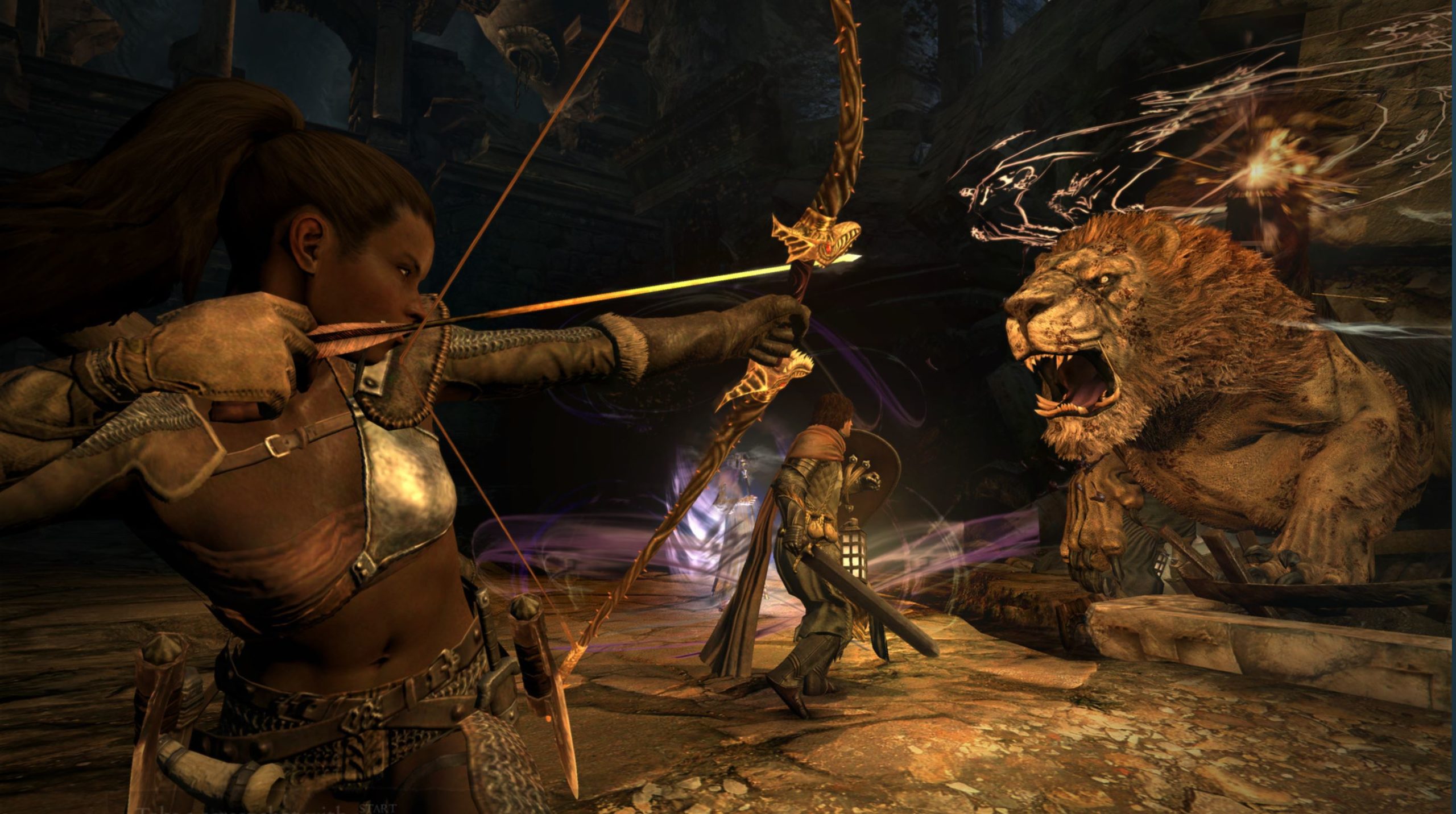 Dragon’s Dogma is not without it’s flaws and issues but is actually a lot of fun to play. It’s a game I’ve gone back to a few times, having recently started on a PS4 run. There’s a level of complexity to this game and it does take quite a bit of time to complete but it also has an almost mindless quality, making it a great game that won’t completely turn your brain to mush but can be a nice way to relax after a terrible day at work. Dragon’s Dogma is one of those games that probably won’t be seen in too many top ten lists. It isn’t quite good enough to earn a spot in those elite rankings for a number of reasons but is still a game that should be played by fans of fantasy RPGs.