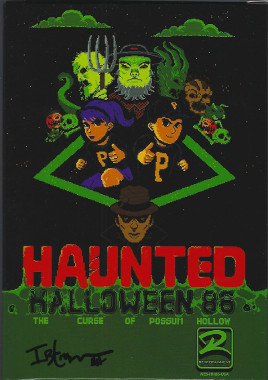 The release of Wario’s Woods in 1994 was the final game for the Nintendo Entertainment System to bear the Official Nintendo Seal of Quality. The 8-bit system’s relevance had been waning the previous years while SNES, Sega Genesis and TurboGrafx-16 battled for dominance of the 16-bit era. In recent years there has been a resurgence of NES love and we’ve even seen a few new games coming out for the 8-bit box such as Creepy Brawlers, Haunted: Halloween ’85 and Billionaire Banshee. One of the more successful new NES cartridges is the sequel Haunted: Halloween ’86 (The Curse of Possum Hollow), which originally came out in Fall of 2016. Since then it has been ported to PC via Steam, Xbox One and most recently Nintendo Switch, making it available on a more accessible Nintendo platform.

Games that are stylistic retro throwbacks are nothing new, especially with indie titles. Those titles, however, are designed for more powerful hardware but have old-fashioned graphics and mechanics as a design choice. Haunted: Halloween ’86 is not a game that is styled to look like an NES game, but rather a port of an actual NES game. As an authentic NES title, Haunted: Halloween ’86 was coded entirely in 6502 Assembly language down in Retrotainment’s 8-bit laboratories with a chiptune soundtrack composed entirely in Famitracker. As a result, compared to other indie games this title is limited by what the NES hardware is capable of doing but it is also a reminder that even with those limitations that good game design is more important than powerful hardware.

Set in the town of Possum Hollow on Halloween in 1986, 11-year old kids Donny and Tami venture into the night for some wholesome trick or treating. Things seem to be going well until they venture into a farmhouse owned by Harry, a crazy old farmer. The preteen duo find themselves deep in Harry’s dungeon. The two need to fight their way out against various monsters and undead abominations and travel through seven deadly levels in Possum Hollow, hoping to solve to break the curse that has turned their town into some living nightmare. 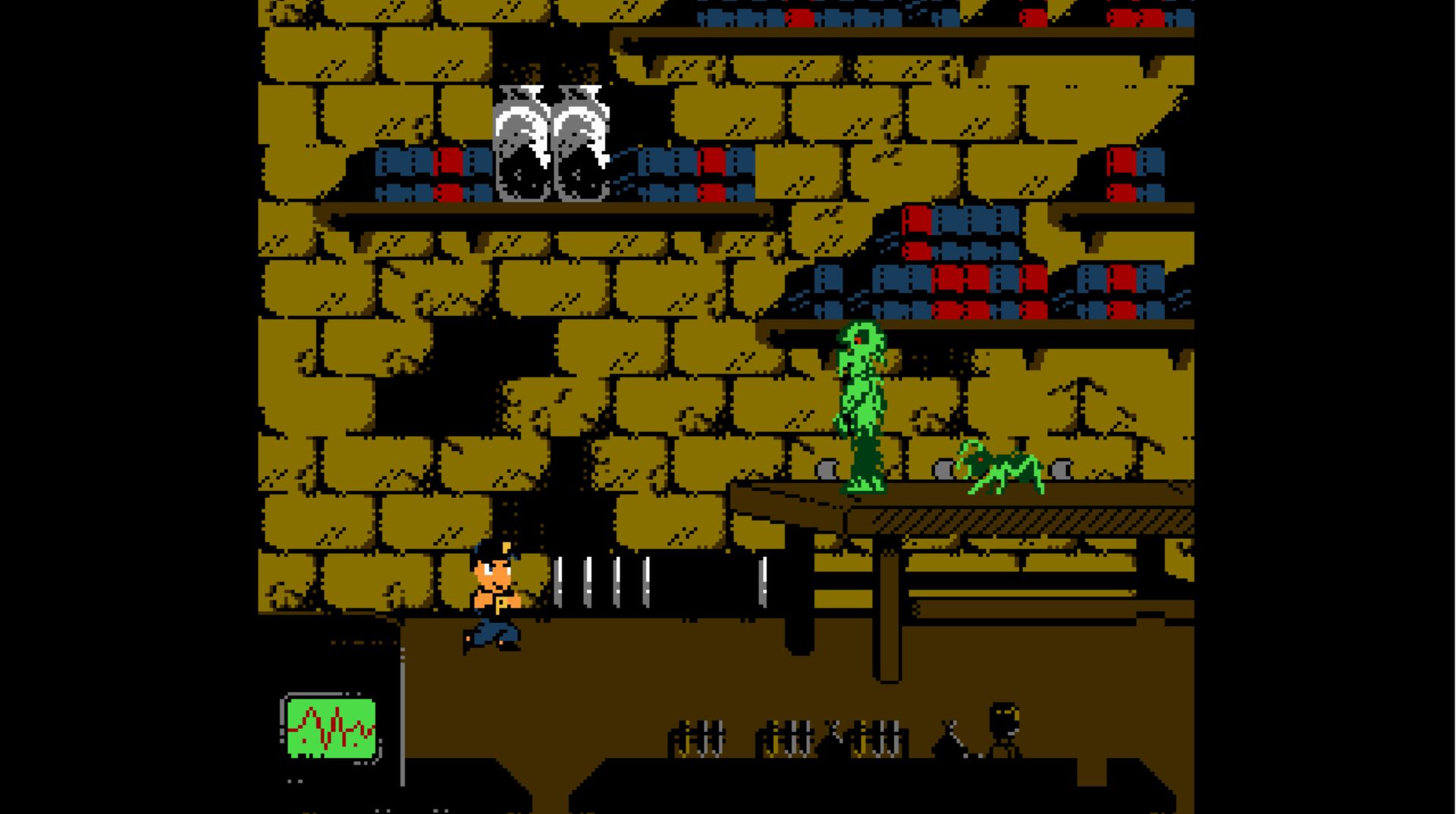 The player can switch between Donny and Tami at any point in the game. Their attacks vary slightly from each other but basically control the same way. They also each have their own health meter, which isn’t so much a meter but changing of skin tone from a healthy human shade to varying levels of unhealthy green. For a game that was deliberately made with the limitations of the NES the gameplay is rather advanced. With a D-pad and only the A and B buttons, the amount of Street Fighter style special attacks is limited, but again, for an NES game the combat mechanics are more advanced than most of the titles available for this console. It is old fashioned 2D beat ’em up platforming with controls that lack the fluidity of modern 2D games but there is nothing to complain about for 8-bit veterans. The selected difficulty level has some effect on starting powers, but after each level the player can unlock a special move they can use with various button combinations. For an 8-bit game the environmental and creature designs are detailed and varied. One noteworthy detail was in one of the levels there was Slayer graffiti, which seemed appropriate since their iconic album Reign in Blood was released only a few weeks prior to the events of this game.

Players familiar with Haunted: Halloween ’85 have a good idea of what they can expect in the sequel. Haunted: Halloween ’86 is a prime example of what a sequel should be: it doesn’t change what made its predecessor enjoyable and also expands on it. The levels seems more developed with improved and more advanced game mechanics. The greatest appeal about Haunted: Halloween ’86 is also what may make it a hard sell for some players and that it is that it was made for a 35 year old console. The NES was a great system for its time and the popularity of video games owe a tremendous debt to so many great 8-bit titles. People like myself who still occasionally enjoy playing the NES will appreciate this title for what it is despite the limitations of the hardware, which to this title’s credit have included some rather advanced character actions considering this. Gamers who were introduced to video games in the PlayStation era or later might view something that is advanced for obsolete hardware standards as simply being primitive. The controls are about as smooth and fluid as one could expect from the NES but advances in game design over the last few decades only highlight the 8-bit box’s limitations. 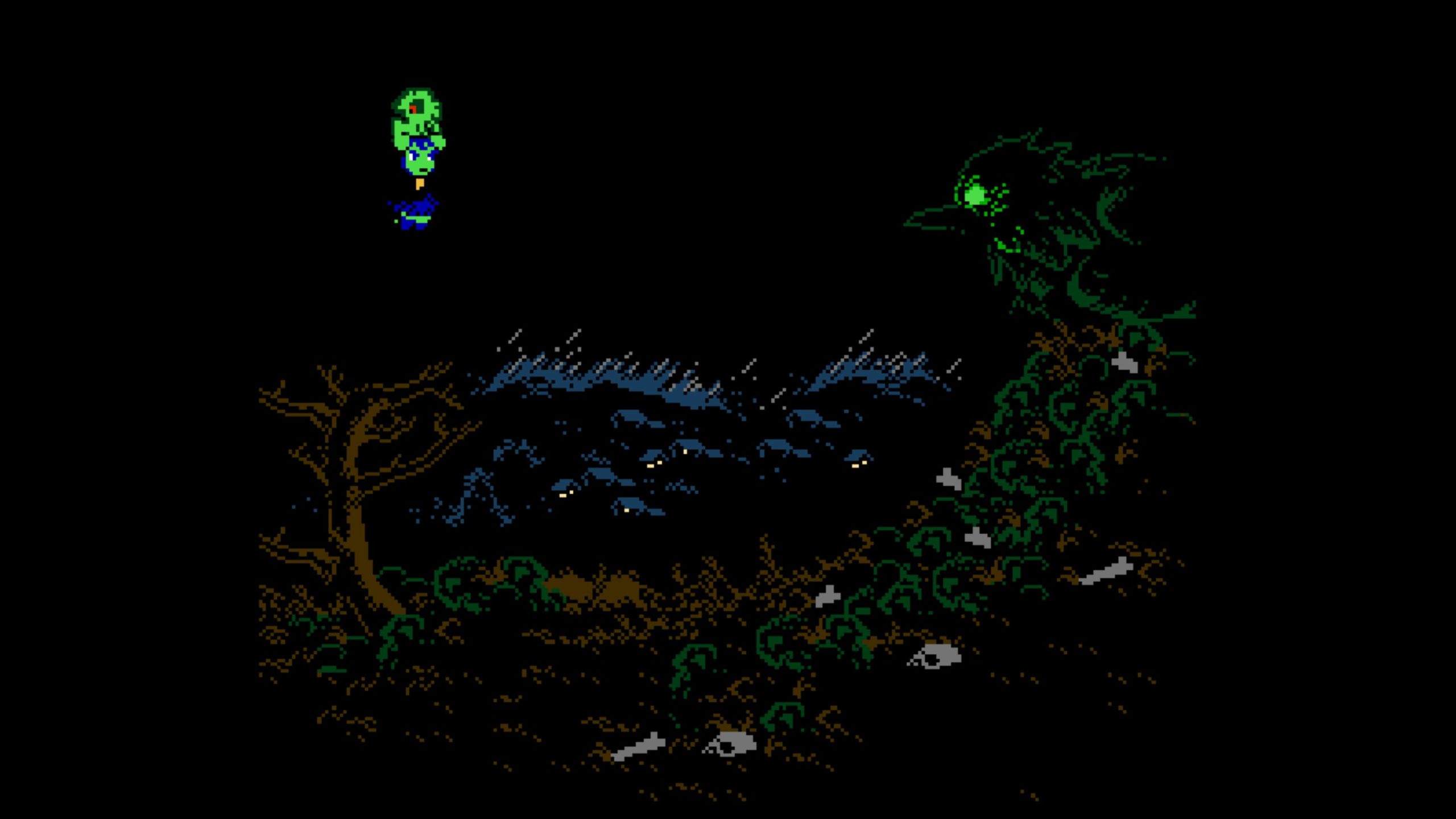 Haunted: Halloween ’86 (The Curse of Possum Hollow) is a must-play title for fans of the NES, and not just for the novelty factor of it being a new (well, 2016) NES game. This is a genuinely fun game that would make a great addition to anyone’s 8-bit cartridge collection, though having the more affordable and convenient option to play it on the Switch is great. The levels are satisfyingly long, filled with good combat, challenging platforming and impressive boss battles. Haunted: Halloween ’86 maintains the essences of its predecessor while generally improving all aspects of it. It succeeds in reminding us that video games were still great even with simpler and more limited hardware, but those limitations remind us how far the medium has advanced. The appeal of this title is pretty much going to be limited to the niche market of retro gamers but after spending some time in Possum Hollow I wouldn’t object to there being a Halloween ’87 in the future.